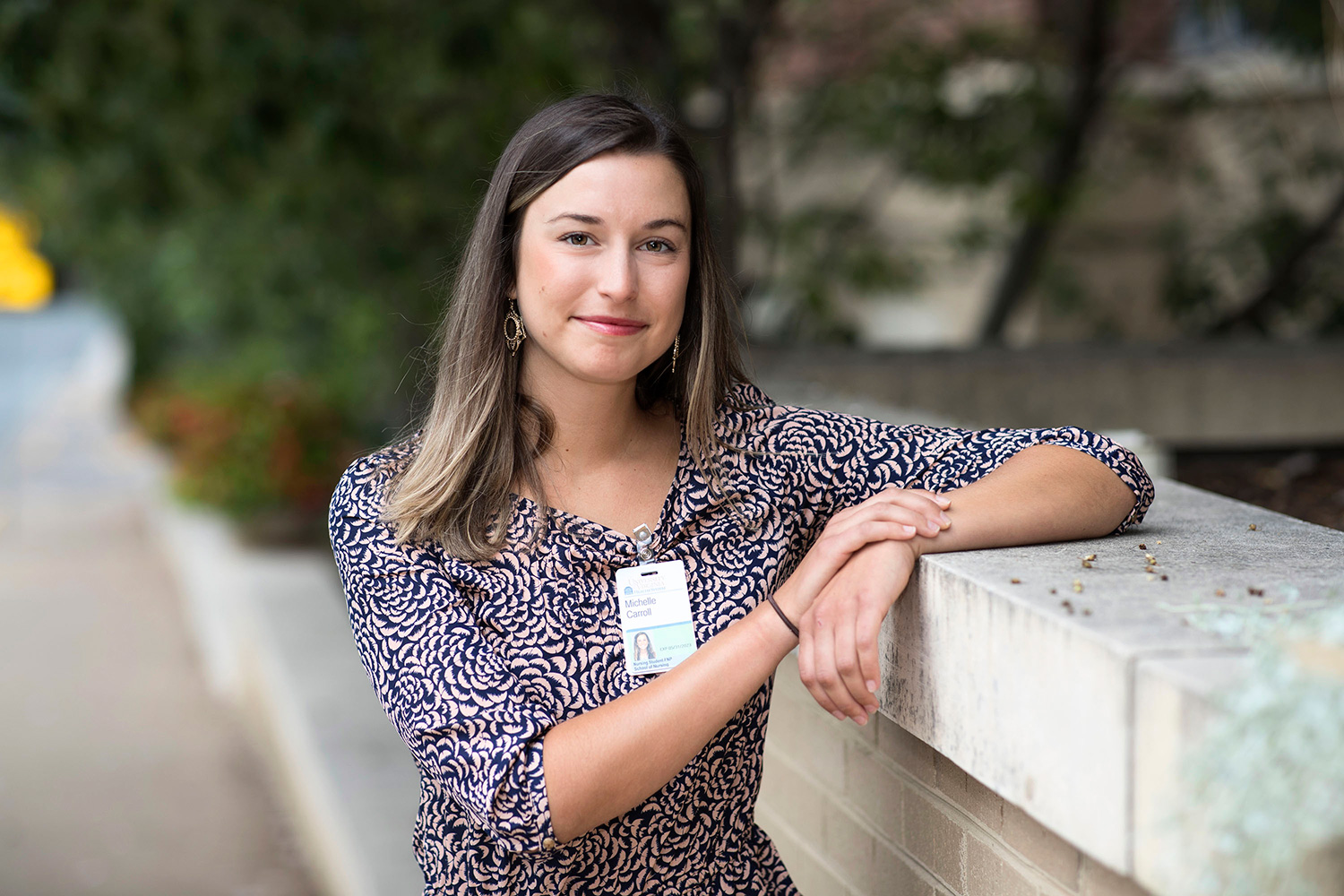 Michelle Carroll, a University of Virginia graduate nursing student, was at Blue Mountain Brewery in Afton on Friday evening when a fellow diner at a neighboring table went into cardiac arrest.

He was fortunate: Carroll is studying to be a family nurse practitioner, worked in oncology for three years at MedStar Georgetown Hospital and currently works as a medical surgical nurse at Sentara Martha Jefferson Hospital. She was quick to lend a life-saving hand.

The Midlothian native shared her story with UVA Today.

Q. Can you set the stage for us, please?

A. So, it was Friday, and my boyfriend Matt and I had gone to dinner, and they sat us at this table next to a big family. The funny thing was that, during our meal, the grandfather from that table kept coming over, cracking jokes, introducing his grandkids and apologizing that they were encroaching in our space, which they really weren’t. … He was obviously excited to be with his family, and was a really nice guy.

We had just signed the check when I heard a woman, the man’s wife, screaming, “Help, someone, help!” and, saw, because his chair was right next to mine, about an arm’s length away, that the grandfather was sort of slumped over, sort of lying in the chair, his eyes closed. I jumped up, felt his neck; there was no pulse.

His wife was screaming, obviously very concerned, and the two daughters – I think they just didn’t know what was going on. With grandkids there, little kids, some in their teens, it was just crazy-traumatic for the family.

A. I could see his face is turning greyish-purple, and knew I had to start CPR. Someone called 911, and we help him to the ground, and I’m doing chest compressions for maybe 30 to 40 seconds. Someone handed my boyfriend an EpiPen, and another woman – an EMT, I think she was an employee there – knew how to give it, and did.

I keep going on the compressions, and all of a sudden, not a minute later, he comes to. He can tell us where he is, what his name is. … It’s hard to say what had happened. He definitely went into cardiac arrest, but whether it was the compressions or the EpiPen that brought him back, I just don’t know.

Q. What was the experience like of doing CPR?

A. I was doing compressions and counting out loud, and people were coming over. When he came to, there were so many people around. A physician came over and said we needed to keep him lying on the ground. He’d been trying to sit up.

At that point I backed away, and thought, “You guys know what you’re doing.” I was first on the scene, but they followed up, and assessed and evaluated him. My boyfriend and I didn’t wish to crowd the family, and in two to three more minutes we heard the ambulance coming and knew he was in good hands.

Q. How did you feel afterward?

A. Honestly, we were both pretty shaken up. My boyfriend had never really seen anything like that. Of course, I’ve had to resuscitate people in the hospital, but never like that, out in the field. It was the last thing I was expecting to happen. In hospitals, we have so many resources, and that’s just not the case with someone sitting in a metal chair on a patio at a restaurant.

Q. What was the conversation like on the way home?

A. Well, we were shaken, and sort of did a mini-debrief. I asked him if he was OK, he sort of had this glazed look on his face. … I told him, “You did the perfectly right thing.”

Q. Were you surprised you reacted so quickly?

A. Every time I’ve had to do CPR, in the hospital, the fight-or-flight instinct kicks in, and you just know what to do. We have that training, and you hear about stuff that happens like this; your training prepares you.

Q. Have you shared what happened with others?

A. Well, I called my parents that night, and have one friend in my UVA program that I’m really close with, and I told her. When I was at work Saturday morning, I shared the experience in our morning huddle.

It’s been funny to say, “The craziest thing happened to me; I had to start CPR on a man who went into cardiac arrest.” It’s not something that’s really table talk, though.

Q. Do you know what happened to him? What if you meet him on the sidewalk one day?

A. It’s strange. That thought definitely crossed my mind. But I don’t know how he is, even what his name is. I want to know how he’s doing, but, well, maybe another time, another place.

Q. How are you processing it, these days later?

A. It’s funny; I had a Cuban sandwich that night, and only ate half at dinner, wanting to save the other half for lunch during my shift the following day. When I ate it the next day, I was like, “Wow, I’m not sure I want to relive this.”

But I’m really glad I was where I was when it happened. If I hadn’t been, and no one had noticed, 30 more seconds might have gone by, and … People are meant to be where they are at the right time. And it’s reassuring how many other people in the medical field responded, too. That’s reassuring – for society.

At UVA, There Is a Club for Everyone END_OF_DOCUMENT_TOKEN_TO_BE_REPLACED