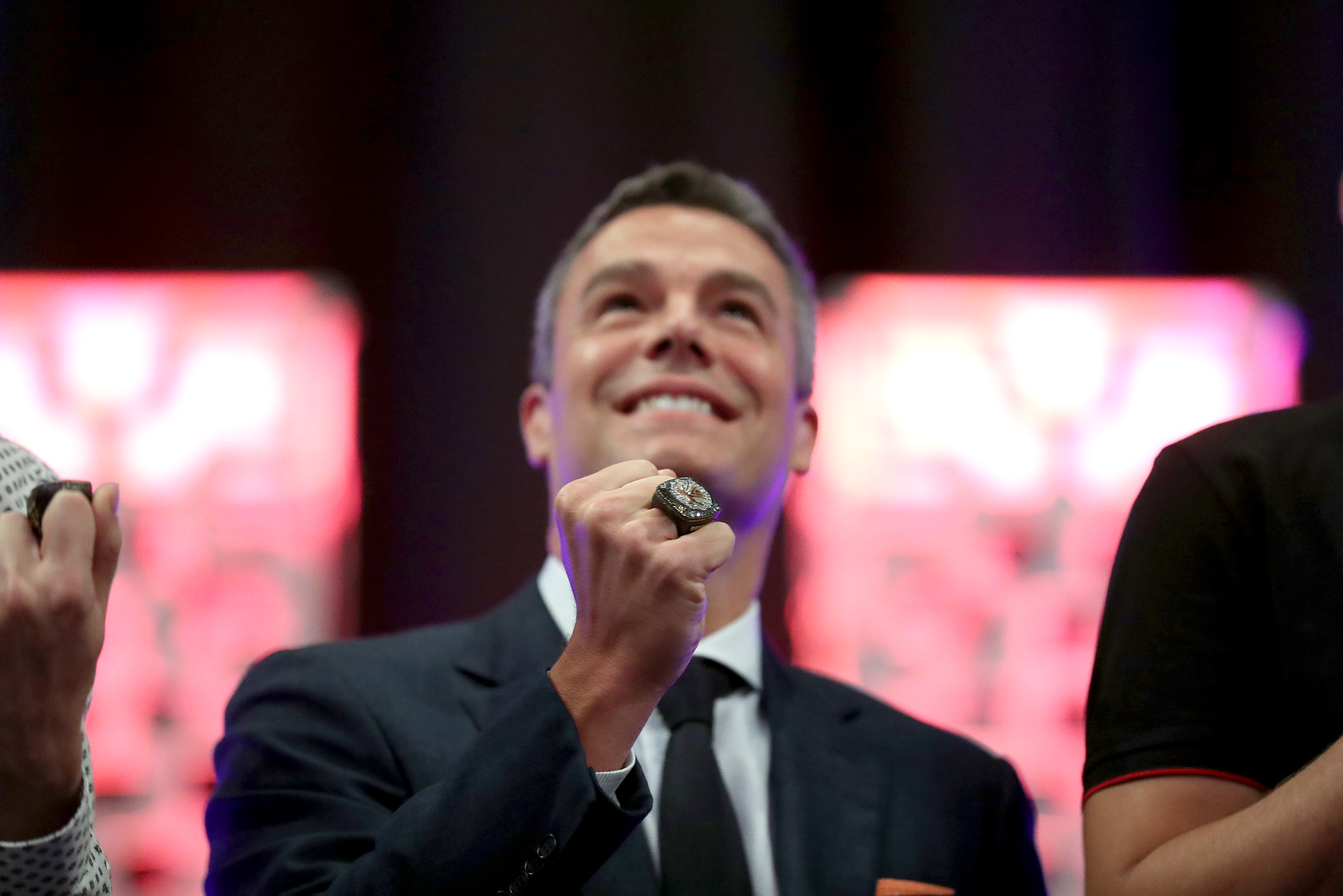 Prior to Friday night’s University of Virginia men’s basketball event, “A Night with the National Champions,” Cavaliers head coach Tony Bennett said that he expected the program’s first-ever title to totally sink in after the banner was raised to the rafters.

“When that banner is placed up there permanently…it’s going to be up there forever,’” said Bennett, his eyes widening as if he was just processing the fact for the first time. “You’ll walk by and see it and say, ‘OK.’”

Later in the evening, it sure seemed like last spring’s amazing run had finally sunk in as the banner was hoisted to the John Paul Jones Arena ceiling amid loud cheers.

For Bennett, for his players and coaches (past and present), and for thousands of jubilant Wahoo fans, it was a night to remember.

Here are five of the evening’s memorable moments:

UVA President Jim Ryan presented Bennett with a framed poster of the team.

But it wasn’t just any poster.

The poster featured an illustration of the team’s win probability in each of the final three NCAA Tournament games – all won in the final seconds of regulation or in overtime. For the game against Purdue, for example, UVA had just a 9% probability of winning. Late-game heroics by Kihei Clark and Mamadi Diakite sent the game into overtime, where the Cavaliers prevailed. 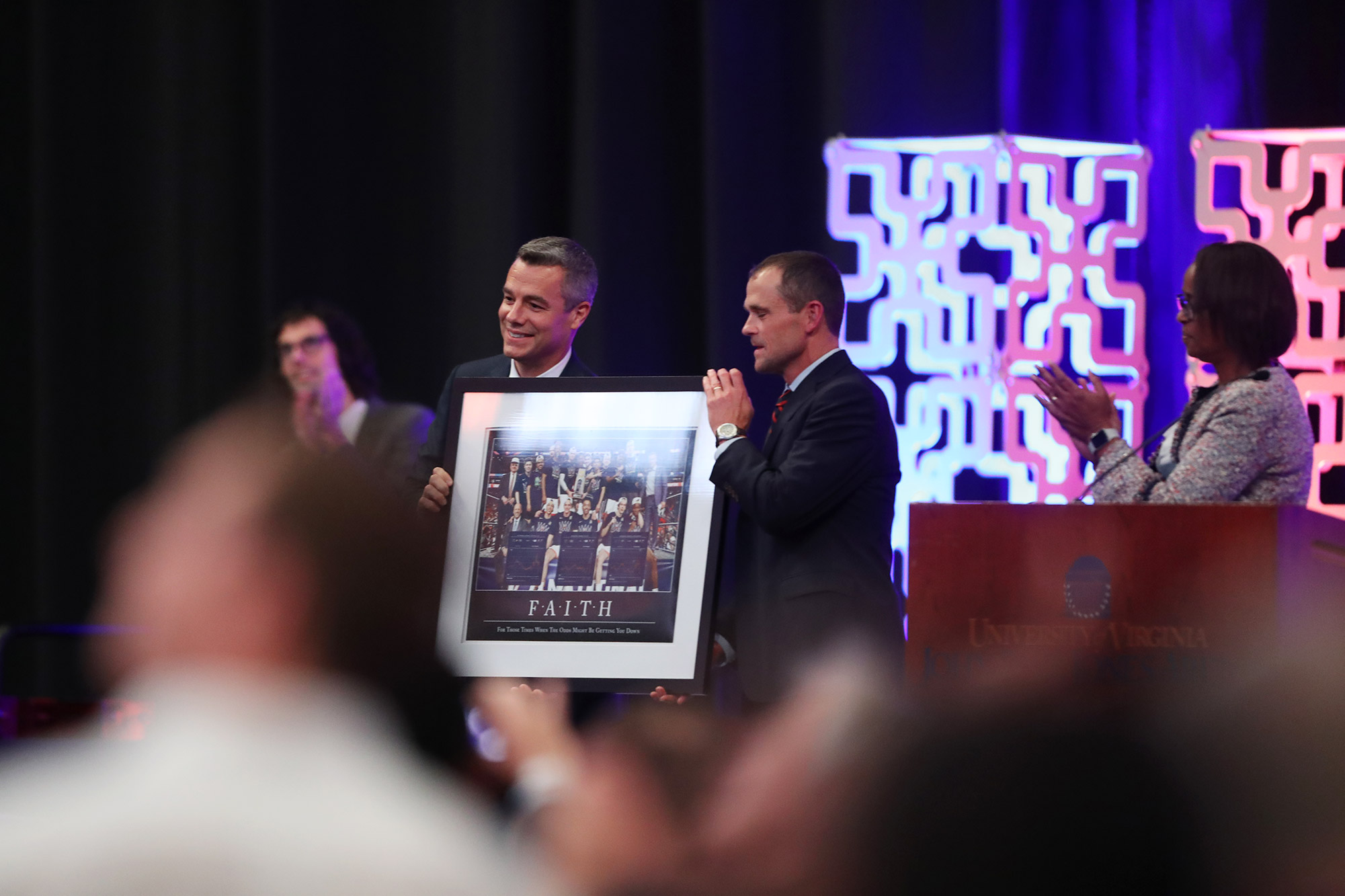 Next to the illustration was a photo of the entire team holding the NCAA championship trophy and an inscription:

For those times when the odds might be getting you down

Letters from the Seven Society

“What defines your success isn’t the final seconds of a game in April, but a journey much longer,” the letter read. “The lesson is a testament to what leadership and humility can accomplish.”

The Seven Society said it would also be presenting each player with their own letter highlighting individual accomplishments and urging them to take lessons they learned during their journey back to their respective communities.

When the beloved Bennett took the stage, he had fans hanging on his every anecdote.

But the biggest roar came when he pulled a game ticket from the team’s historic loss to University Maryland Baltimore County in the 2018 NCAA Tournament out of his pocket. 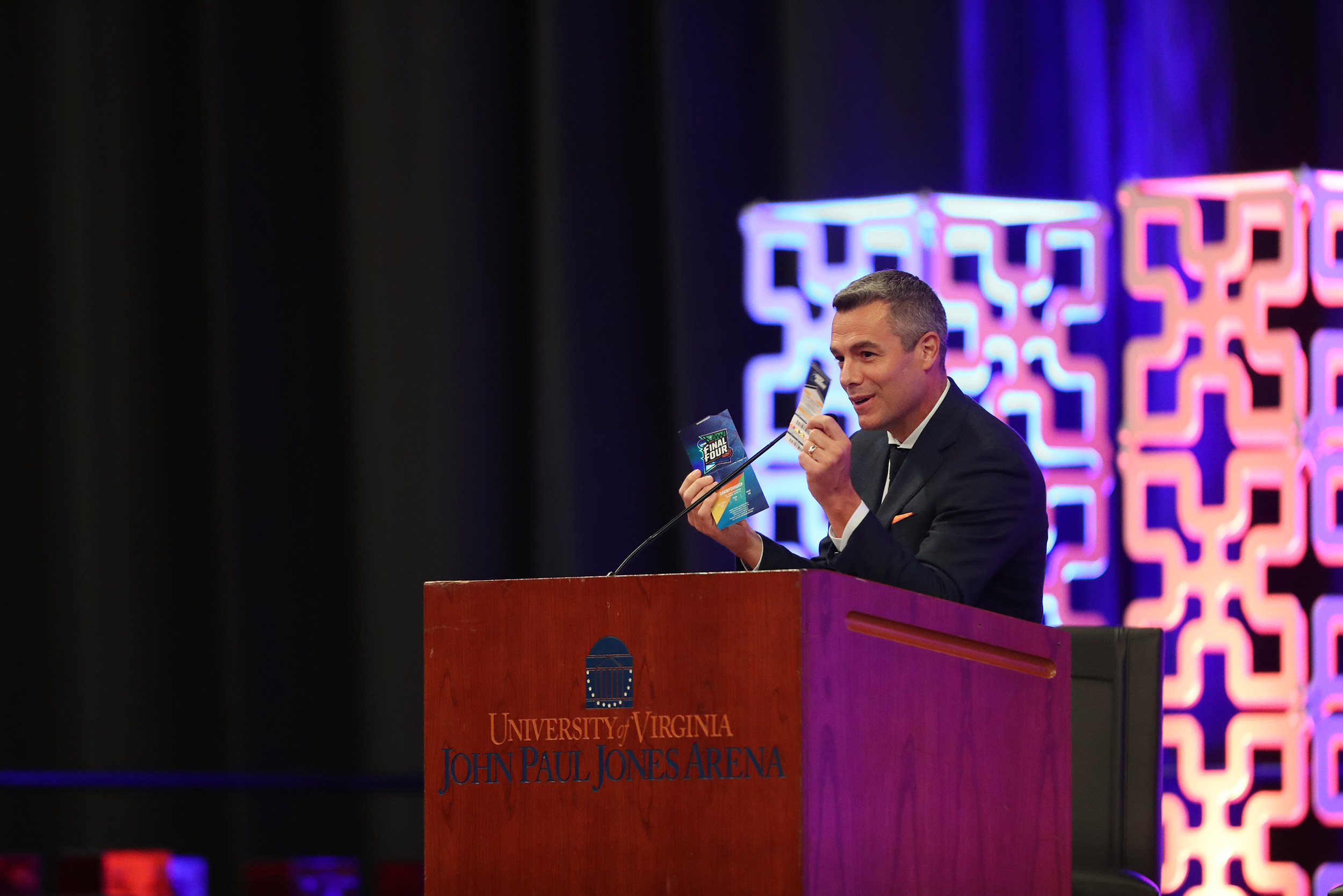 Bennett then reached into his pocket again and removed a ticket from the team’s NCAA championship victory over Texas Tech in the 2019 tournament.

“If you learn to use adversity right,” Bennett told the crowd, “it will buy you a ticket to a place you couldn’t have gotten to any other way.

“I know I’m a little biased, but I think it’s one of the greatest sports stories ever told.”

The return of Guy, Jerome and Hunter

Former players Kyle Guy, Ty Jerome and De’Andre Hunter, all of whom left the program early for the NBA after winning it all, were back at JPJ  for the festivities.

“Just to go out how we did was unbelievable – something not a lot of people accomplish,” Jerome said. “Losing to UMBC and then putting the work in during the summer and going out how we did…just the journey was so special.” 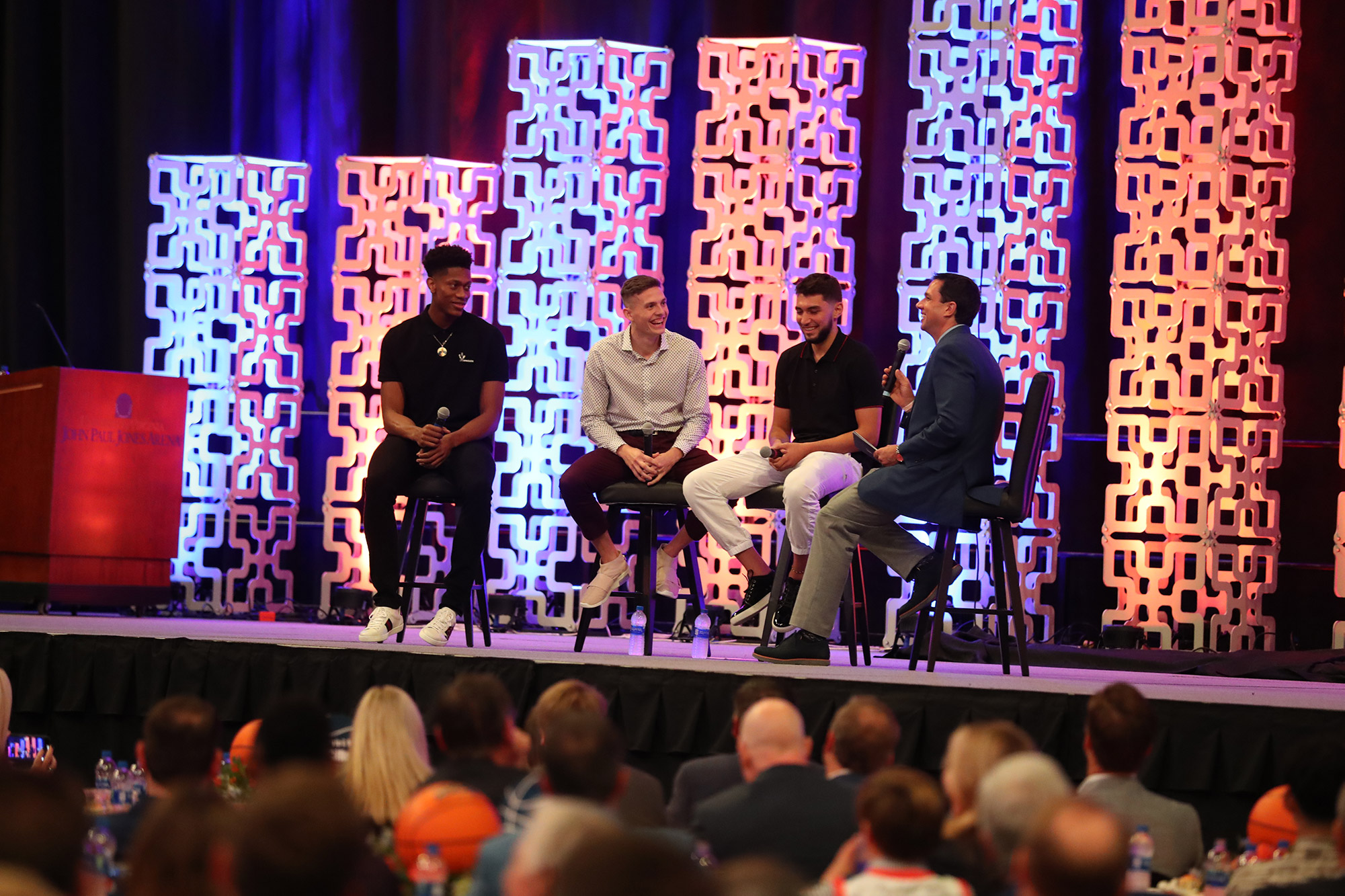 M.C. Dave Koehn asked Hunter about his emotions as he threw the ball high into the air at the final buzzer in the championship game against Texas Tech.

“I always wanted to do that,” Hunter said. “I always watched the NBA Finals and said I would do it if I ever got a chance to.”

Kiwi Jack Salt, who could not make the event, appeared via video, telling the crowd how thankful he was for having been a part of the UVA and Charlottesville communities.

Handing out the hardware

At the end of the evening, the entire 2018-19 team – players, coaches, staff – came on stage to accept their championship rings.

After placing the enormous baubles on their fingers, the championship banner was raised.

The night concluded with a video montage of the team’s journey to the title, as the song “Back Home” by Andy Grammer played, a song the team played throughout the season. Just moments earlier, Grammer had appeared via video, explaining the meaning behind the song (which he said he wrote because he had been missing some of his closest friends).

When the shot by Mamadi Diakite against Purdue flashed on the screen, there was a huge ovation.

The video concluded with confetti falling at U.S. Bank Stadium in Minneapolis, and more cheers in JPJ.

A Year We Will Never Forget: 2019-20 in Review END_OF_DOCUMENT_TOKEN_TO_BE_REPLACED

‘What Will You Carry With You?’ Remarks From UVA President Jim Ryan END_OF_DOCUMENT_TOKEN_TO_BE_REPLACED