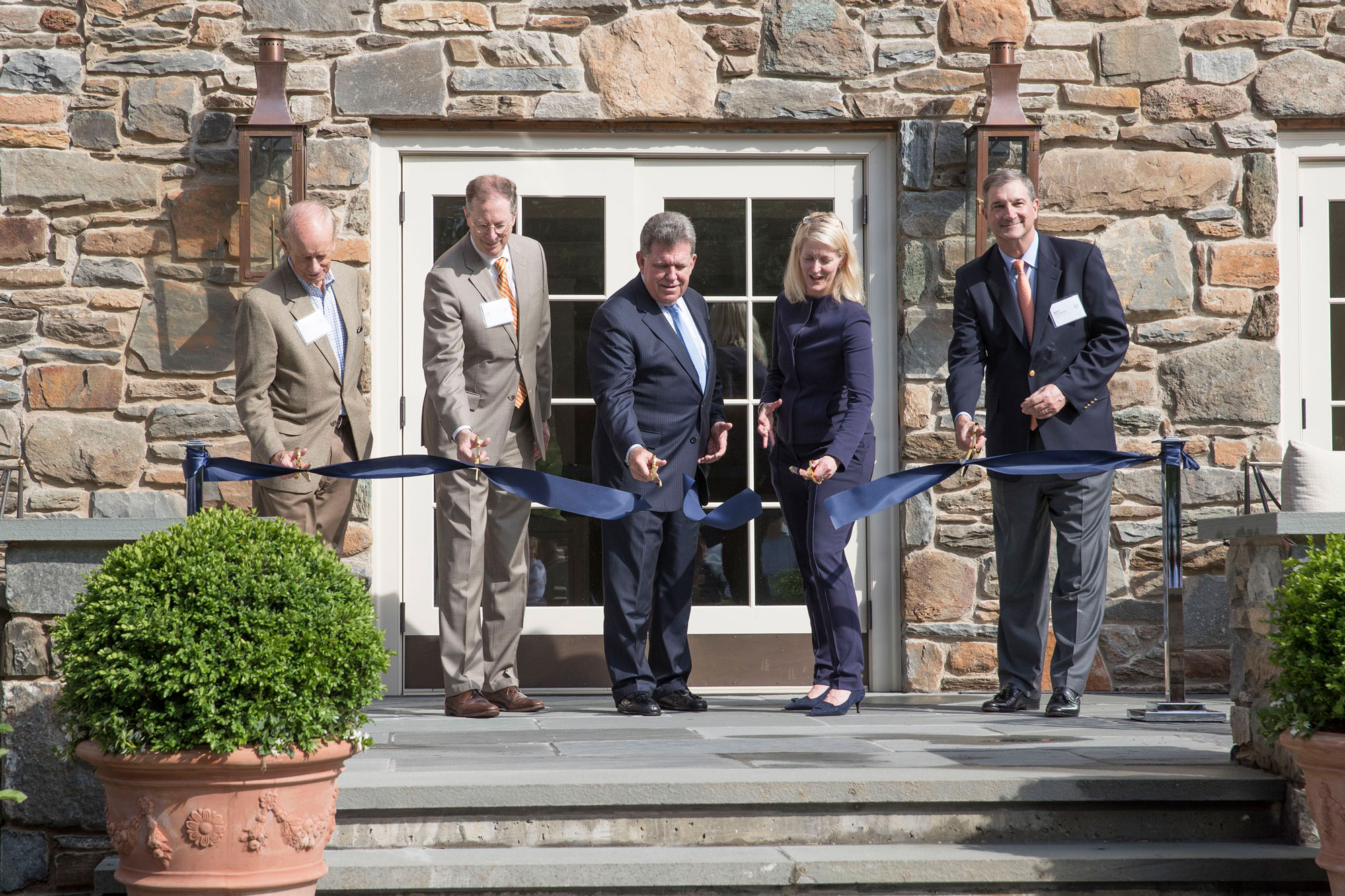 The nearly 60 sycamore trees that line the Boar’s Head Resort were chosen by Meade Palmer, a renowned landscape architect and professor at the University of Virginia School of Architecture, who placed the trees in such a way that when they were fully grown, they would be spaced appropriately.

“In the early years, they looked a little awkward,” said University of Virginia Foundation Chief Executive Officer Tim Rose, “but he really had a vision for what it would look like long-term.”

If only Palmer could see the place now.

On Tuesday afternoon, the Boar’s Head Resort – formerly the Boar’s Head Inn – celebrated the grand opening of its renovated main building, part of a multi-million-dollar “reimagination” of the property that is owned and operated by the UVA Foundation.

The renovation, which began last February, included a full makeover of the restaurant, bar, main entrance and lobby.

The design of the Mill Room restaurant (formerly the Old Mill Room) includes seating for 200 guests and upgrades to the porch room, with a private dining area and flexible banquet space for large gatherings. A glass-backed bar has created a lively and open feel. The focal point of the space: wood beams from 1834.

Rose said the idea was to keep traditional elements intact, while providing enhancements to add modern character to the historic inn.

In another nod to the resort’s history, the logo on new signage throughout the grounds includes sycamore branches and leaves.

“The hotel today is not the hotel that you traveled to when you were a kid,” Rose said. “Now hotels have a different vibe to them, and we needed to upgrade the product and yet not lose the specialness and historic nature of the property.” 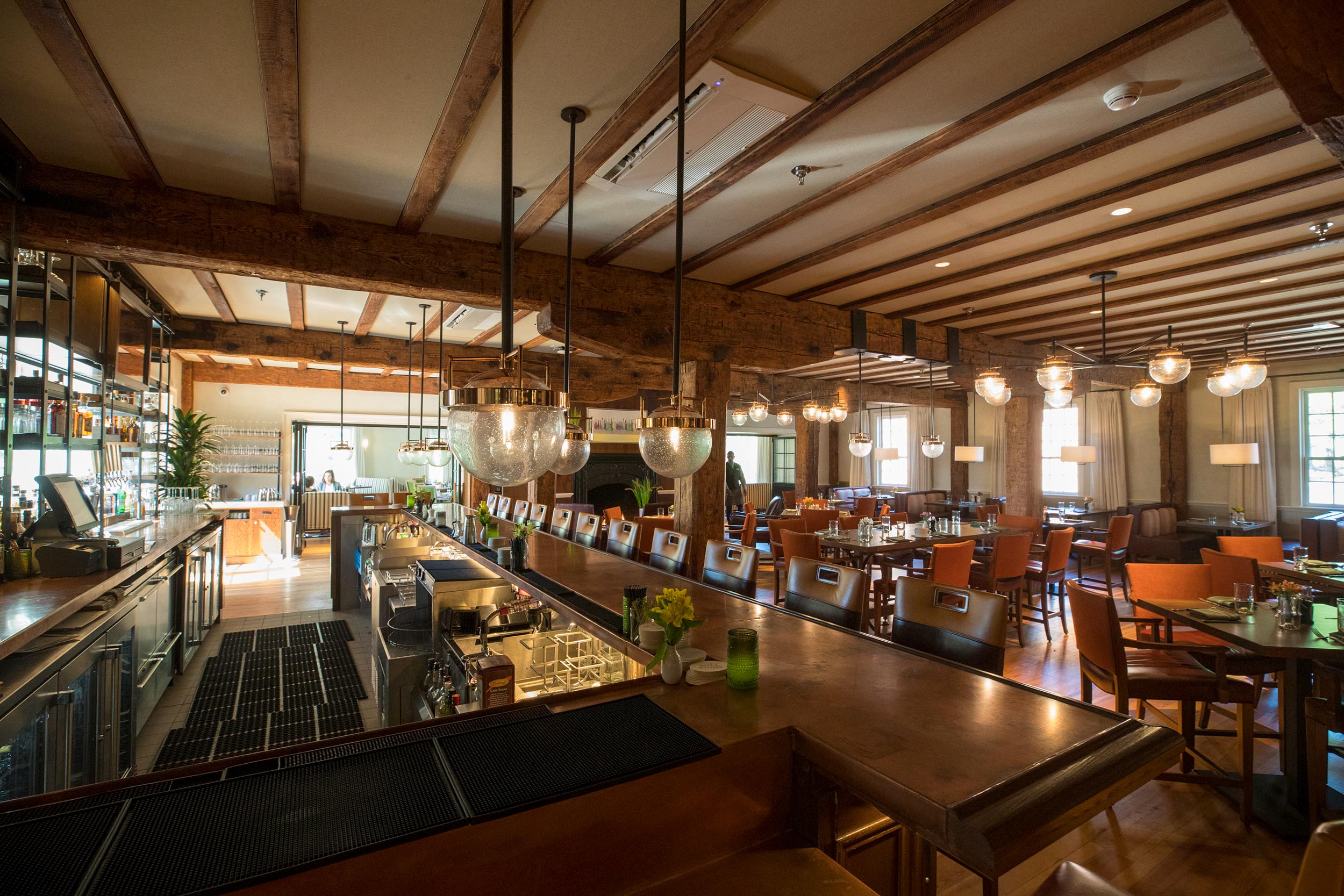 “The history here is much more than the past 60 years,” said Fay in his remarks. “The mill was built 135 years ago and the original land grant for this property goes back to 1734.”

“We’re honored to continue to care for this place for both UVA and this community,” Fay said. “If all goes well with our planning, we hope to continue to push the resort forward to be one of the finest resorts not just in the mid-Atlantic and not just on the East Coast, but in the United States.”

Both Fay and Davis praised Hogan, the former UVA executive vice president and chief operating officer, with Fay calling him “the big driver on this project.”

“Thanks to the hard work and dedication of the staff at UVA and the UVA Foundation and the leadership of the foundation board and the Board of Visitors, it’s an honor to cut this ribbon,” Davis said. “Incredible team work made this dream a reality.”

The project relocated the main entrance and porte-cochère. Inside, a half-dozen small rooms have been transformed into one large open space.

To give the interior more of an outdoorsy feel, windows were added to bring in more natural light.

“Just as the Downtown Mall forces these ‘social collisions or connections’ between people, our lobby, the patio and what was the Old Mill Room now does that,” Rose said. “It’s all been opened up and now connects with the natural landscape.”

Complementing the physical changes, the restaurant has an entirely new, locally inspired menu featuring dishes that evoke regional history with a modern twist.

The resort also worked with a local organization, Babylon Micro-Farms, to transform its historic trout house into a state-of-the-art hydroponic garden that provides fresh produce to the resort’s restaurants.

Elsewhere on the 573-acre property is a planned construction site for a new outdoor tennis facility that would give the UVA tennis teams new homes, similar to the ones that were built recently for the golf and squash teams.

What Is Biotechnology? Where Is It Headed at UVA? END_OF_DOCUMENT_TOKEN_TO_BE_REPLACED