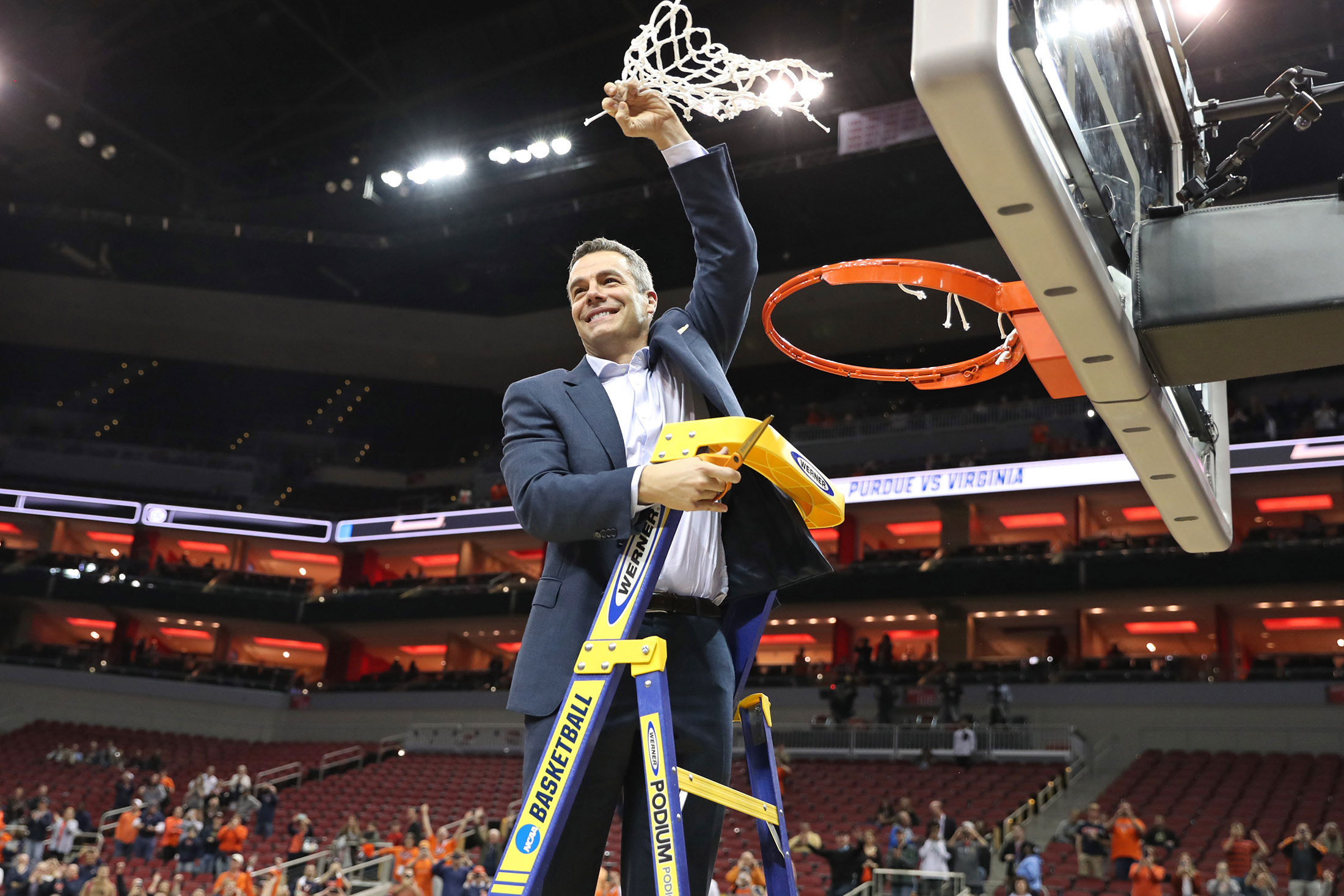 Atop a ladder for the second time this season, cutting down the nets after his team earned a berth to the Final Four, even Tony Bennett couldn’t contain his emotions – and he was hardly alone.

The University of Virginia men’s basketball coach – known for his calm, steady poise, win or lose – let out a triumphant yell, whirling the net over his head as players and the UVA crowd cheered him on.

It was a memorable moment in a night full of them.

Relive a few and hear from some of the many UVA fans who took to the Internet to share their excitement at the Cavaliers’ 80-75 win over Purdue University.

First, a look at the shot that kept the ‘Hoos alive.

With just seconds left on the clock, third-year forward Mamadi Diakite hit an incredible shot to tie the game after first-year Kihei Clark chased down a rebound, sending the game into overtime. By the way, it’s even better with Titanic music.

VIRGINIA IS HEADING TO THE FINAL FOUR!!!! MAMADI DIAKITE’S TYING BUCKET AT THE END OF REGULATION IS EVEN BETTER WITH TITANIC MUSIC!!!! A CLASSIC REGIONAL FINAL!!! pic.twitter.com/NCD6zWMewM

After the overtime win, the celebration was on.

Couldn’t be happier for this special team! #wahoowa #finalfour pic.twitter.com/r6mnOQ1twi

In Charlottesville, the celebrants included a newly wed alumna who took a ride on the crowd.

As mentioned, Bennett was pretty excited about his first Final Four berth.

If a picture is worth a thousand words... #PressOn ⚔️ pic.twitter.com/7AI6KasLnh

He also shared a special moment with his father, Dick Bennett, who led the University of Wisconsin to the Final Four in 2000 – coincidentally, with a win over Purdue.

Incredible moment between Coach Bennett and his father, Dick Bennett. #PressOn to the #FinalFour!
#GoHoos pic.twitter.com/2lxQi3umBN

UVA alumni – including many of Bennett’s former players – were thrilled.

I’ll still go to war for this man any day of the week ! #Redemption https://t.co/0JQDHnZexY

Former players Isaiah Wilkins – who spoke with UVA Today last week – and Devon Hall watched together, from New Zealand and Australia, respectively. Both are playing in professional leagues halfway around the world, but that didn’t stop them from cheering on their team.

Dean of Students Allen Groves was gracious – and many other UVA staff, faculty members and coaches shared in the excitement.

You guys have been terrific all year - thanks for the often funny and always supportive tweets. https://t.co/SCSTFy48eg

I am so proud of these students. #uva #wahoowa #gohoos

So proud and impressed with @UVAMensHoops — they have worked so hard to get to this point. #FinalFour https://t.co/laJRUYEPOl

Bennett summed up his feelings on the night in the late-night press conference.

"I want this program to honor what's important to me, my faith and these young men through success and failure." - Tony Bennett #GoHoos pic.twitter.com/oyiRhBa2Rw

And the team finally made their back to their hotel, where they were greeted with a well-deserved ovation, and lots of pizza.

#WAHOOWA!! What a welcome back at the hotel for @UVAMensHoops!!
South Region CHAMPIONS and #FinalFour bound!#GoHoos pic.twitter.com/E0R7rgGGtC

On Sunday, they made a triumphant return to Charlottesville, greeted by tons of UVA fans at Davenport Field at Disharoon Park.

Hoos turned out for the Welcome Home! pic.twitter.com/N73yv9fPsN