For years, the painting was stowed away, first in the attic of Old Cabell Hall and then in new art storage at The Fralin Museum of Art at the University of Virginia. Its subject, a young man with a ruffled collar and a velvet cap, was innocuous, but a small plaque on the frame added intrigue with just one name: “Rembrandt.”

Jean Lancaster, the museum’s collections manager, rediscovered the painting in 2016 as she began to prepare for a new exhibition, “Collect, Care, Conserve, Curate: The Life of the Art Object,” which opened on Friday. When examined from the back, the cradle support and wax seal at first appeared to be old, perhaps old enough to be original to the 17th-century Dutch master Rembrandt van Rijn. However, Lancaster was skeptical about the painting itself.

“I realized that it was probably not a Rembrandt, because it had been tucked away in storage for so many years and never studied,” she said.

Nonetheless, she was curious about how the painting came to be attributed to Rembrandt and set out to research its origins. What she found only deepened the mystery – and added two more undiscovered paintings to the mix.

Part of the painting’s story is fairly straight-forward. Charlottesville attorney and art collector George Gilmer donated it in 1961, among a group of European paintings he gifted to the University during the 1950s and 1960s. Gilmer himself had probably purchased it from his friend, Albemarle County landowner and Dutch art dealer Baron John von Liedersdorf. A letter from the museum director at the time openly acknowledged that several paintings’ attributions – including the supposed Rembrandt – were suspect.

Lancaster’s first task was to confirm those suspicions. She turned to Larry Goedde, chair of UVA’s McIntire Department of Art and a scholar of Dutch painting, and Scott Nolley, the chief conservator at Fine Art Conservation of Virginia, who frequently consults with the museum.

“Looking at the painting, I found it hard to believe that it was actually of the 17th century,” Goedde said. “Rembrandt used a much more complicated and varied technique and palette to characterize, for example, the wrinkles around the eyes or the treatment of the eye itself. It was clearly not by his hand.” 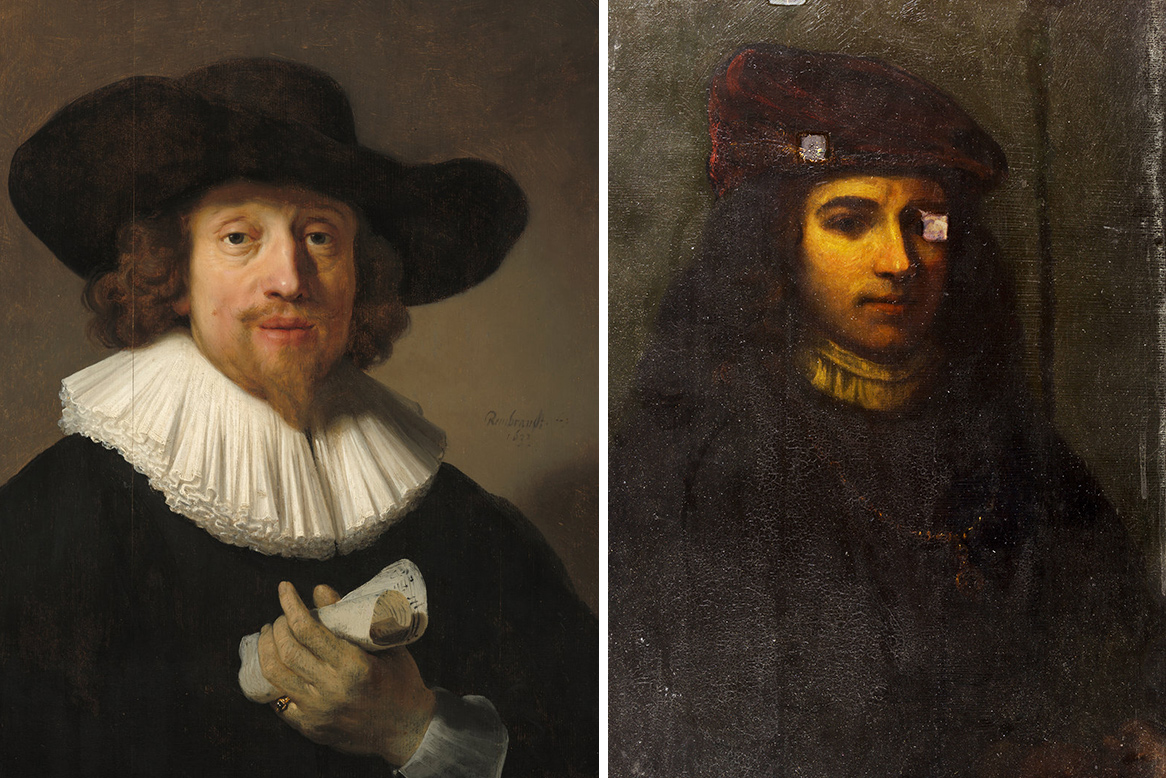 “I was immediately suspect of the draftsmanship and modeling of the portrait image, given that it was attributed to Rembrandt,” he said. “The painted image appeared characteristic of early-20th-century portraiture and was lacking in the ingenuity, the thoughtful and technical aplomb that is part and parcel of Rembrandt’s continuing fame.”

Several possibilities remained. Overpaint and restoration work could have obscured a 17th-century painting so much that it became unrecognizable; the painting could have been fabricated as a sort of off-brand Rembrandt intended as a decorative object; or, more sinisterly, it could be an intentional forgery designed to fool collectors and museums.

Further tests quite literally added another layer to the mystery. Examination using long-wave ultraviolet illumination – a technique employed to visualize applications of restoration overpaint and retouching – revealed a thick application of varnish that obscured any evidence of previous restoration.

Nolley and Lancaster needed to see underneath this varnish, sometimes used by forgers to disguise their work. They turned to the UVA Medical Center’s imaging department for help.

Working with clinical manager Sheryl Morris and radiologic technologist and team lead Karen Czar, the museum’s digital resources coordinator, Leah Stearns, and Nolley carefully positioned the painting on the same X-ray table typically reserved for broken bones and other human maladies. Czar adjusted the radiation dosage a few times to get a clear picture of what was underneath the varnish, eventually using what Morris compared to a soft tissue X-ray, able to detect very small details, even tiny splinters. They were startled by what appeared on the screen.

“When we X-rayed it, we saw a different face come through underneath,” Czar said.

The museum now had two paintings to contend with. 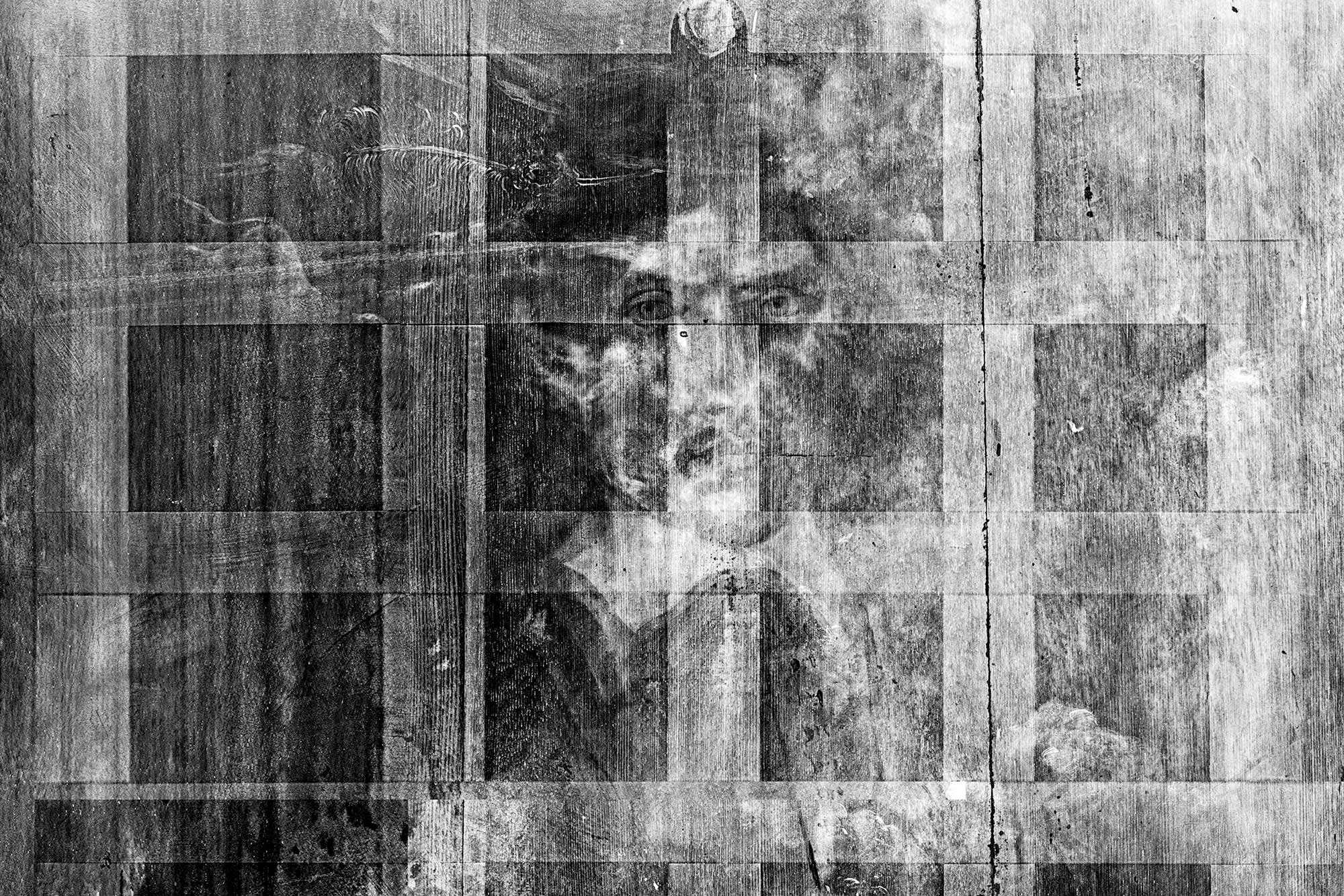 The X-ray, shown above, revealed a second portrait hidden underneath the supposed Rembrandt painting. (Image courtesy of the UVA Imaging Center)

X-raying each quadrant of the painting, the team pieced together the hidden image. Like the top painting, the hidden painting was a portrait of a man, this time an older man in what appears to be military garb, slightly off-center of the visible painting.

“It was a bit eerie,” Morris said of discovering the second painting. “For us, it was exciting to be a part of something like that. I never thought that I would go into the medical field and image a painting.”

Goedde suspects that the hidden portrait dates to around 1700, based on the style of the painting and the age of the wood panel it covers. Most likely, he said, the panel was painted by an obscure artist and left to be reused, as was common practice at the time.

“Reusing paintings is not that unusual,” Goedde said. “Often they are scraped down and painted over, and there are many older, authentic paintings that have other paintings hidden underneath.”

Given the new discovery, the team decided the painting should be used as a teaching tool showing portions of both paintings and highlighting the conservation techniques used to trace and preserve a work’s history. 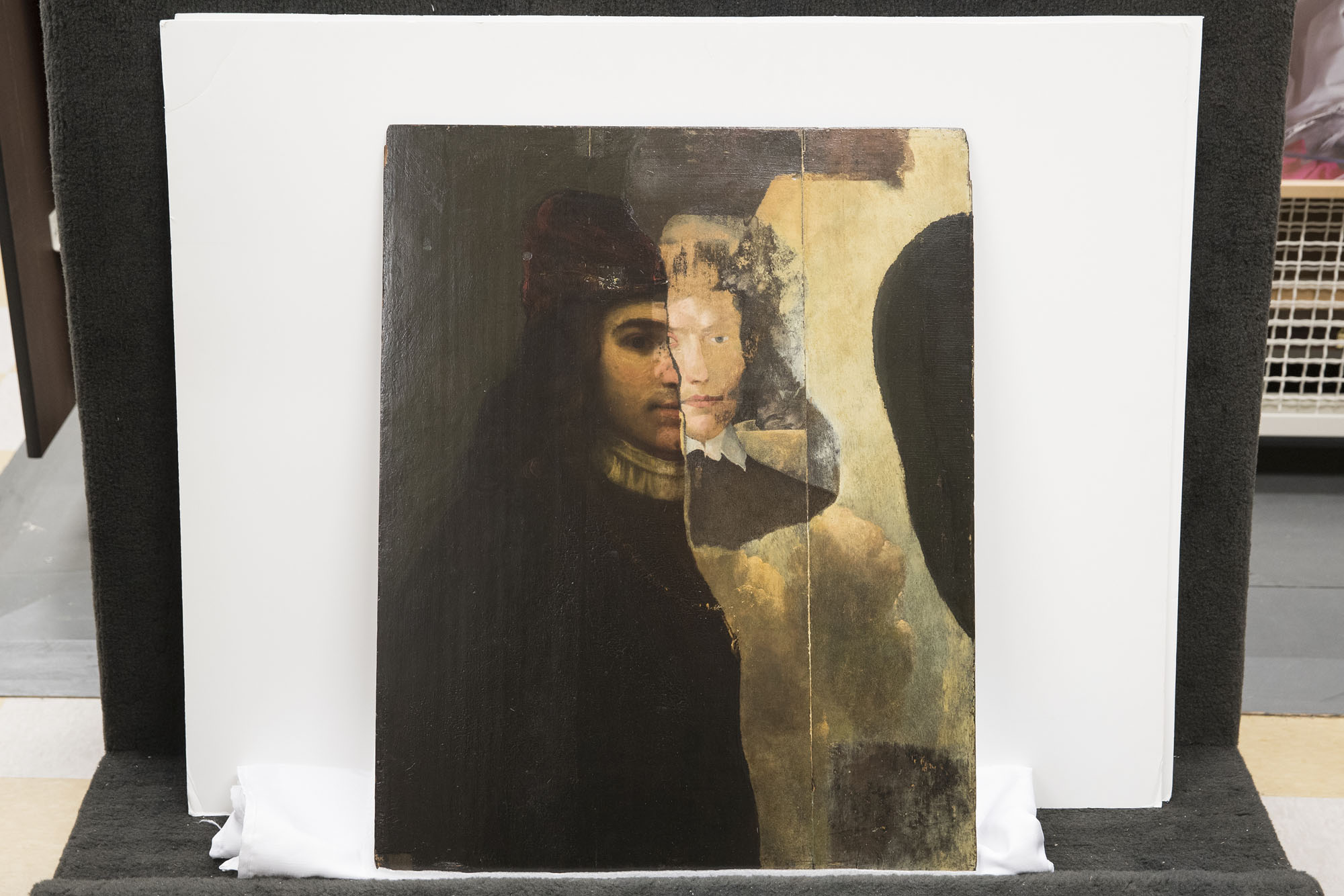 Nolley transported the painting back to his studio in Richmond to excavate some of the hidden portrait and run further tests. He used another X-ray technique, X-ray fluorescence, or XRF analysis, to identify the elements used in the paint pigments.

“Pigment use across time is well-documented, and identifying these materials is often essential to the accurate dating and attribution of artworks,” Nolley said.

The uppermost painting revealed the presence of pigments like titanium white, not used until the 20th century. The wax seal – perhaps intended to make the painting seem older – also contained titanium as well as other modern pigments, indicating that it, too, was created in at least the 20th century. Additionally, though the cradle and some of the wood appeared older, the lattice attached to the back of the painting – known as a moveable cradle – showed signs of being machine-cut and was likely not milled until the late 19th century.

As Nolley began to reduce small portions of the top layer of varnish and restoration paint, he discovered yet another surprise: evidence of a third painting.

“It became clear that, rather than a simple image-painted-over-an-image construction, the panel had been repurposed on a number of occasions,” Nolley said.

He describes the third painting as “a rather atmospheric academic landscape with a cloud-filled sky,” featuring cream and yellow clouds and a red stone building. It was painted over the portrait discovered in the X-ray and, as an image, had over time been the object of several restoration campaigns, likely during the 18th or 19th centuries. 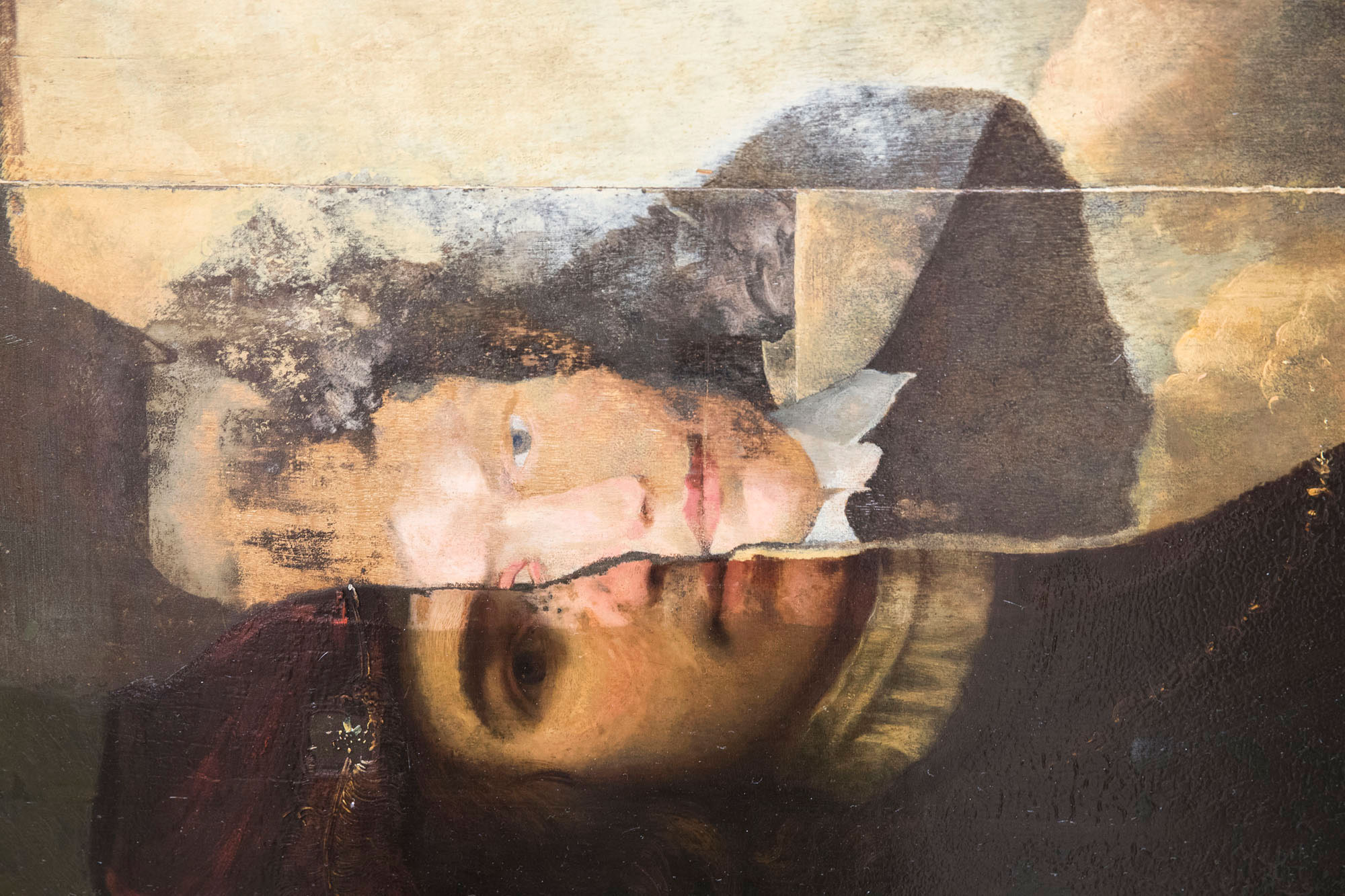 The landscape painting becomes more visible when the canvas is positioned horizontally. Clouds are visible on the far right, along with traces of a brick building on the left. (Photo by Dan Addison, University Communications)

“There are several identifiable layers – accumulations of fill and overpaint throughout the exposed painting – that indicate each of these three images has had a discreet history of treatment – cleaning, mechanical damages, restoration fills and overpaints,” Nolley said.

With Nolley’s paint analysis, the team could conclusively prove that Rembrandt or one of his students did not create the top painting, as it could have been painted no earlier than the 20th century, when titanium white was used in paints. Additionally, they now know that unknown artists reused the panel several times before it was picked up by someone who wanted to turn it into a Rembrandt.

That person, Goedde said, could either have created and sold the painting as an intentional, decorative copy or intended it as an outright forgery.

“In the 18th and 19th centuries, copies became a phenomenon, because photographic reproduction was not available,” Goedde said. “Thomas Jefferson, for example, owned a copy of a famous Guido Reni painting. These copies were the only way people could get famous paintings, and they were made in perfectly good faith.”

In fact, the Rembrandt Research Project, a group of six historians who in 1968 set out to authenticate every painting attributed to the Dutchman, discovered that many suspected forgeries were actually innocent copies or works in the style of Rembrandt created by students and followers in the 17th century.

However, Goedde believes that this particular painting is not simply a copy.

“I believe it is a forgery,” he said, citing the clumsy imitation of Rembrandt’s style, the deceptive use of a wax seal and an older frame, as well as the presence of 20th-century paint pigments, which date the painting later than other Rembrandt copies. “Weighing it all together, it was clearly intended to deceive.”

When the deception occurred is hard to pinpoint. There is little way of knowing if Gilmer or the man from whom he purchased the painting, likely Baron John von Liedersdorf, also believed it to be a Rembrandt. That part of the story, at least, seems destined to remain a mystery.

Regardless, museum director and chief curator Matthew McLendon said the painting will be a useful tool for helping UVA students understand everything from the characteristics of a true Rembrandt to the history of connoisseurship, curation and even forgery in the art industry.

“As a teaching object, this is very valuable,” McLendon said. 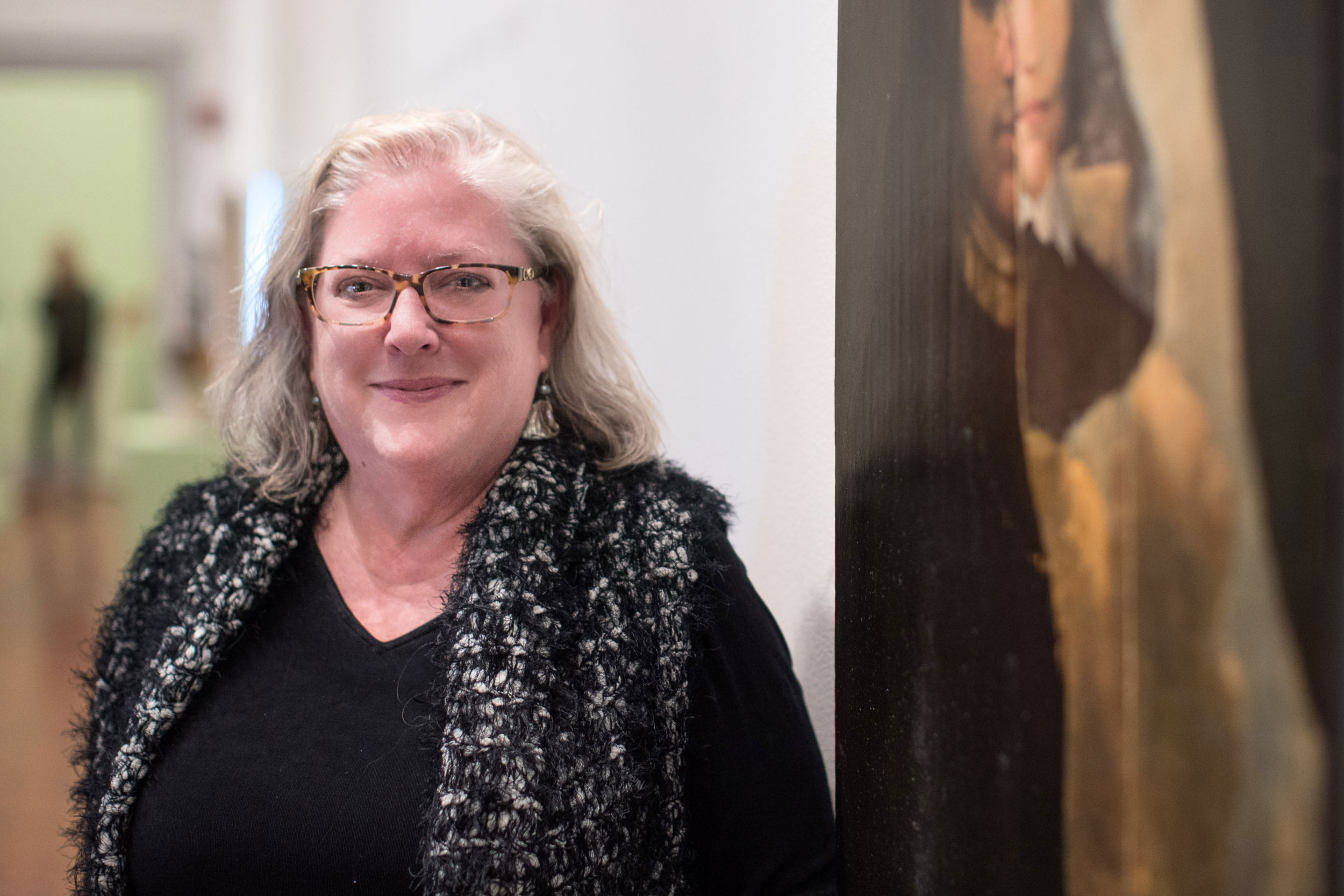 Lancaster with the painting before the exhibition opened. (Photo by Sanjay Suchak, University Communications)

For Lancaster, it is also one of the more intriguing mysteries she has discovered during her years presiding over the museum’s collections.

“I have been the collections manager for more than 20 years, so I feel like I have seen, touched or looked at almost everything in the collection,” she said. “Searching through the many layers of this painting was truly a collaborative effort and unique challenge.”

This piece, along with many others from the museum’s collection, is on display in the new exhibition, “Collect, Care, Conserve, Curate: The Life of the Art Object,” running through July 23. Learn more about this and other current exhibitions on view at The Fralin Museum of Art at the University of Virginia.