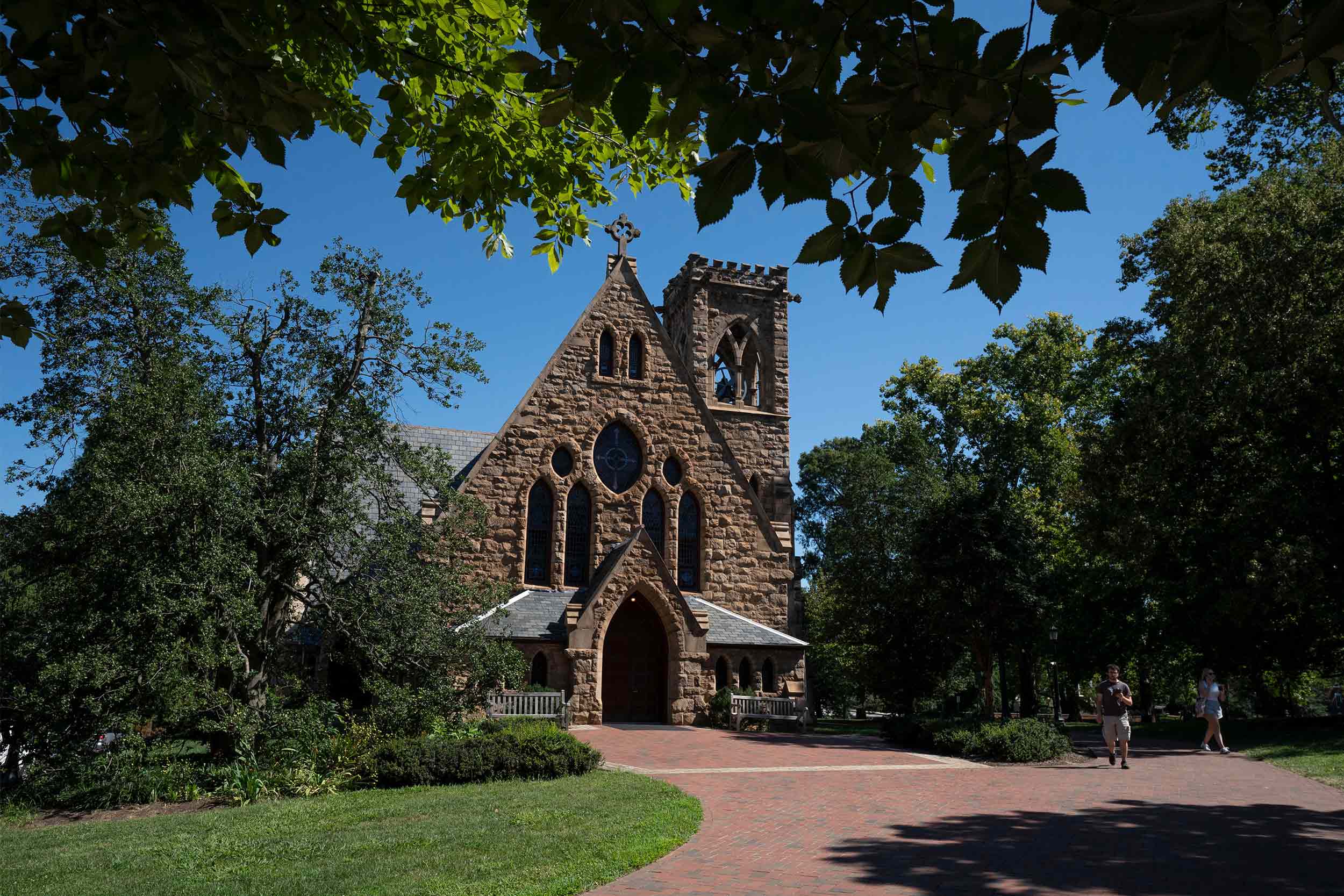 Exterior work on the chapel in 2021 stopped water from seeping into the interior, which will now undergo its own renovation. (Photos by Dan Addison, University Communications)

For the first time since the 1950s, renovations are planned for the University of Virginia Chapel.

The 137-year-old Gothic structure will be undergoing work to clean, restore and refinish historic surfaces throughout its interior, including wainscotting, chair rails and baseboards, doors, elements of the wood ceiling, brick arches, and its columns. The building will be closed for about six months starting Jan. 2.

The work, to be performed by UVA Construction & Renovation Services with assistance from an architectural conservation firm to be selected this fall, also will replace lighting, update the smoke detection system, repair damaged plaster and paint the walls.

“Some of this interior work is related to the 2021 exterior repointing and waterproofing effort,” Ryan Taylor, the central grounds maintenance zone manager for Facilities Management, said. “Much of the interior plaster damage was due to water infiltration, which has now been corrected, so we can move forward with plaster repairs and painting.”

The leaks have been a challenge. 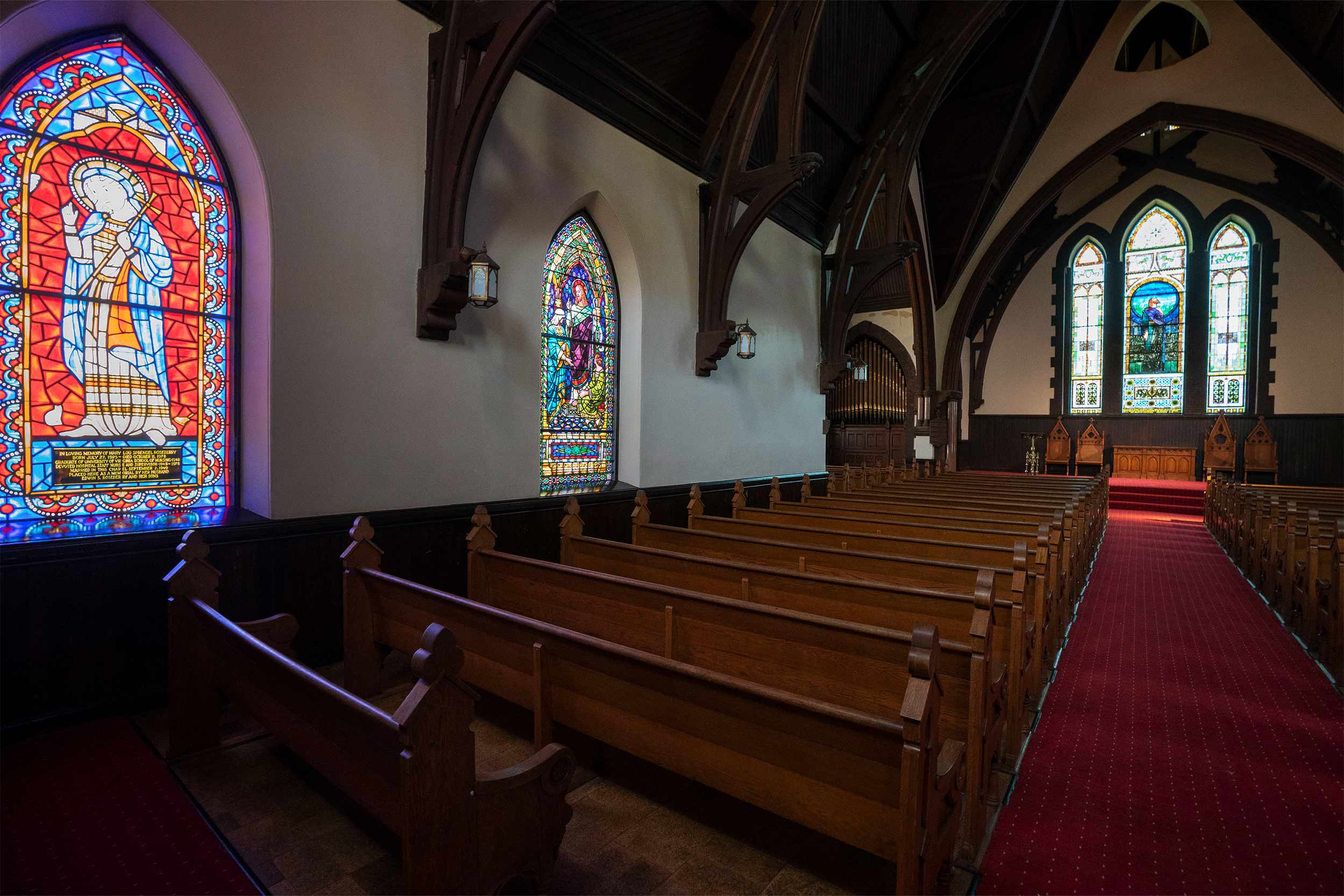 The original oak pews will be removed during the work, refinished and then re-installed.

“As long as I have been familiar with the chapel, there have been water issues,” said Sarita Herman, historic preservation team leader for Facilities Management. “The plaster has been heavily replaced over time. We don’t know how much of the plaster is original, but we do know that entire walls have had to be redone due to water intrusion. We will save as much as we can, especially if we can identify any original plaster, but we do have to channel for the new electrical wiring.”

The chapel’s lighting, dating from the 1950s renovation, will be replaced with new fixtures that will accommodate LED bulbs.

“We will also add LED strip lights to the top side of the beams in the ceilings,” said Sarita Herman, historic preservation project manager for Facilities Management. “That will add more ambient light toward the ceiling, softly increasing the light level in the chapel. It will also highlight the features of the architecture.”

The original oak pews will be removed, refurbished and then reinstalled at the end of the project.  Cork flooring, installed during the 1950s renovation, and the carpet, which was replaced more recently, will be removed. The original pine flooring will be refinished and left exposed in parts of the chapel where carpet is not needed.

“We have not made exact decisions on the extent of the carpeting,” Herman said. “We need the carpet for acoustical control, so we will be replacing the carpet in the aisles and on the chancel floor.”

The project is budgeted at $2.6 million, with funds coming from UVA’s deferred maintenance fund, Student Affairs and from private donors.

The chapel is a popular venue for University and private events such as weddings, which are very popular with alumni. The chapel also routinely hosts memorials, student music group performances, theater auditions, religious services, student group initiation ceremonies, reunions, charity concerts and Bible study, according to Toya Corbett, associate vice president for strategic initiatives in the Division of Student Affairs. The chapel hosted 332 events in 2018, of which 290 were UVA-associated activities. In 2019, there were 291 events, including 255 UVA activities.

No events were scheduled during the planned renovation.

The chapel was not part of University founder Thomas Jefferson’s original Academical Village. Jefferson designed a secular University, but services have always been held at the University.

“In the early years, with Jefferson’s assent, they were held in the Upper East Oval Room, the current Board of Visitors room of the Rotunda,” said Brian Hogg, the senior historic preservation planner in the Office of the Architect for the University. “When the gymnasium wings on the Rotunda were enclosed in the mid-1840s, the east wing became a chapel. It is labeled as such on mid-19th century maps.” 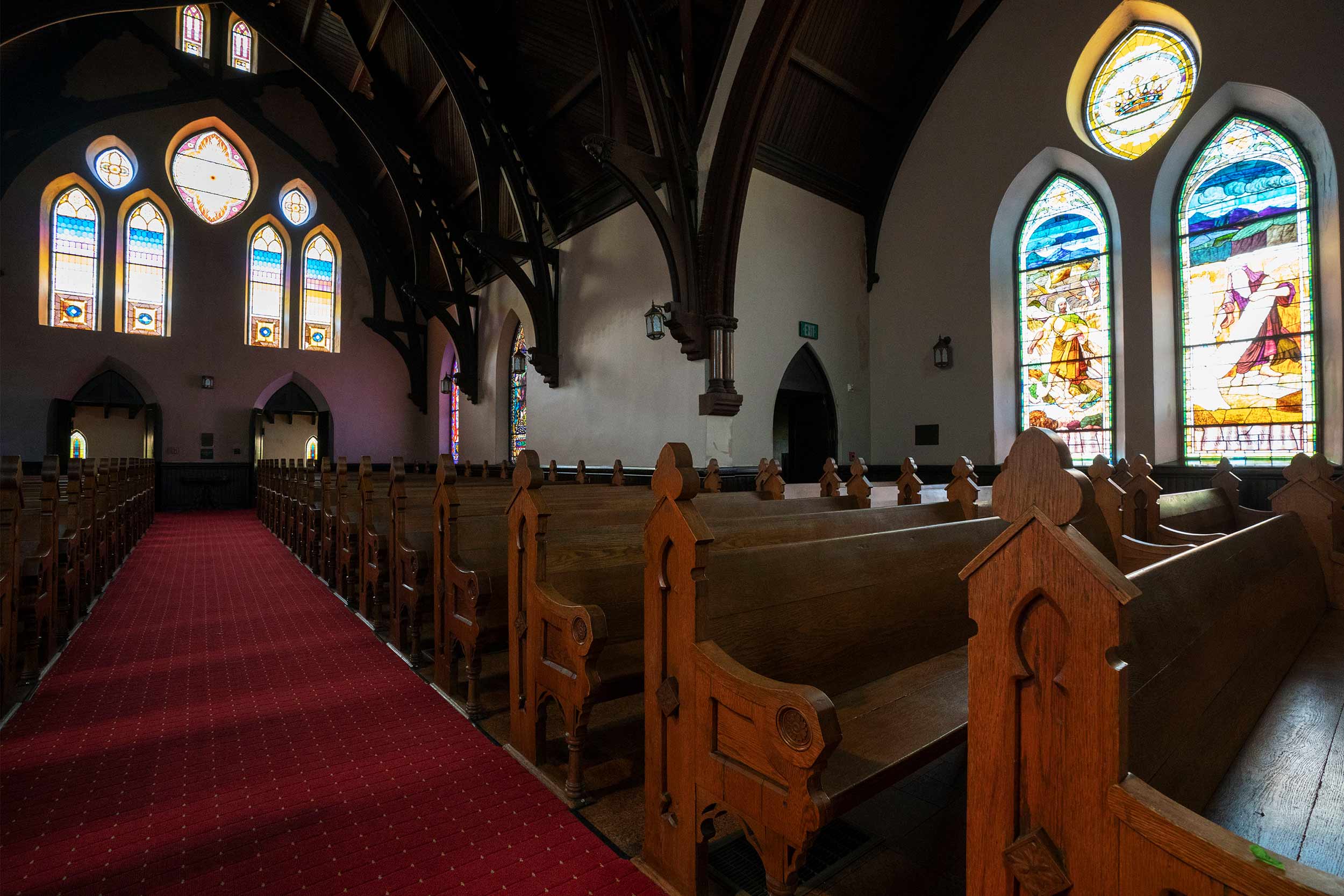 The chapel carpet, which helps control the acoustics in the building, will be replaced, the cork flooring removed and some of the original pine flooring exposed.

A parsonage was built in 1855 at what is now 4 Dawson’s Row, home of the Office of African-American Affairs.

“Attempts were made before the Civil War to construct a chapel,” Hogg said. “William Pratt, the first superintendent of building and grounds and designer of Varsity Hall, Levering Hall and the Garden Room, put forward a plan for a very large building at the south end of the Lawn that would have had space for the chapel, the Jefferson Society and the Washington Society. Fortunately, not enough money was raised to build this before the war.”

After the Civil War, a revival of Christianity spurred interest in a chapel. The Ladies’ Chapel Aid Society raised the money for a chapel as a gift to the school. The society commissioned the design by Baltimore architect Charles Emmett Cassell and paid for its construction.

“The choice of Gothic was an over-expression of the building’s purpose – Gothic signified Christian – and was recognized at the time as a conscious contrast to Jefferson’s classically inspired design,” Hogg said. “Regardless of the different style, the chapel was placed in alignment with the Lawn – the front door aligns with that of Hotel A quite deliberately – and is respectful of the geometry Jefferson established.

“It’s also important to remember that the chapel was constructed while the Rotunda Annex was still in place, so was less prominent than it is now and formed part of a tri-partite composition with the Annex and Brooks Hall,” Hogg said.

Initially, ministers from a variety of denominations rotated through as the University chaplain, but that position has long been vacant.