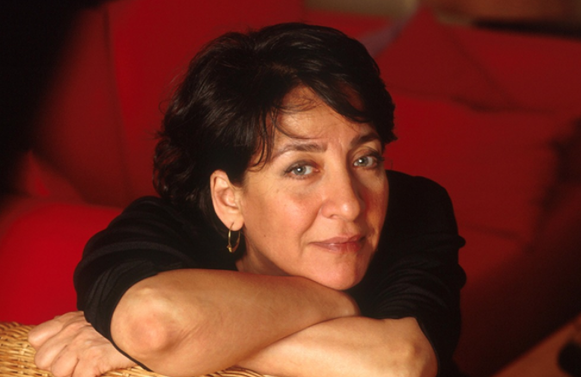 Internationally lauded author Hoda Barakat may only have arrived at the University of Virginia in early January, but her novels took students back decades to the Lebanese civil war that occurred between 1975 and 1990.

Barakat spent a month as the first-ever author-in-residence in the Department of Middle Eastern and South Asian Languages, where she shared her works with U.Va. students studying Arabic.

Her novels capture the turmoil of the Lebanese civil war, highlighting representations of the family, government, citizens and politics during conflict. Originally published in Arabic, they have been translated into 18 different languages, inviting audiences outside of the Arabic culture to share in the experiences of her characters.

U.Va. Professor Hanadi Al-Samman, who worked closely with Barakat during her stay, compares her work to Toni Morrison, in that it gives a different perspective on the conflict of the time. “In her exploration of paradigms of power and violence in troubled societies, her insistence on locating their effects on the victims’ body, Hoda Barakat rewrites national histories with modern, informed and more tolerant twist,” she said.

U.Va. graduate student Michelle Sawwan said, “She is a writer who can reach global audiences while staying true to her roots.”

Barakat’s works have been recognized with numerous medals and honors, including “Chevalier de l’Ordre des Arts et des Lettres (Knight of the Order of Arts and Letters)” and “Chevalier de l’Ordre du Mérite National (Knight of the Order of National Merit)” by the French cultural ministry. Her first novel, “The Stone of Laughter,” the first Arabic work to have a homosexual man as its main character, won the Al-Naqid Literary Prize, a prestigious Arabic Critic Literary Prize. Her third novel, “The Tiller of Waters,” won the 2001 Naguib Mahfouz Medal for Literature, another prestigious award for Arabic literature

Al-Samman has taught English-translated versions of Barakat’s literature in numerous classes in the past, but saw an opportunity for a unique learning experience and a true engagement with the original Arabic texts through the author-in-residence program. Al-Samman received a grant from the U.Va. Center for International Studies to host Barakat for her one-month stay.

The opportunity for students to engage with Barakat was a crucial element to her residency. She met twice a week with 10 undergraduate and three graduate students enrolled in “Love, War and Exile in Hoda Barakat’s Narrative,” a course taught entirely in Arabic. They read two of her books, “Letters of a Stranger” and an abridged version of “My Master and My Lover.”

While Al-Samman has taught Barakat’s work before, the course was designed specifically for Barakat’s residency. The course was about more than just knowledge of Barakat’s works and mastery of the language; it also challenged students to consider the culture of the literature, while giving students insight into her inspiration and creative writing process.

“I discovered that if you want to go further when teaching language, you have to go past just the passion and desire” to master the language, Barakat said. “You have to add another dimension to learn about the culture, context and literature.”

Al-Samman agreed. "The only way to truly experience another culture is by delving deeply into its literature," she said.

Students – many of whom had studied Barakat’s work prior to the course – treasured the experience to ask questions directly to the author.

“This experience was no doubt unique and exceptional,” graduate student Mohammed Shihab said. “It gave me the chance to talk directly to [Barakat] and get many answers for questions I already had in my mind for a long time about why she mentioned that, how come these things came together, and what was in her mind when she wrote this or that sentence in her works.”

Barakat extended the classroom experience by offering advanced graduate students additional time outside of class. “I decided to give the graduate students a series of courses because they were willing to go the distance with the analysis,” said Barakat, who now lives in Paris.

The individual time with Barakat offered students the opportunity to look deep into their personal projects on the culture and discover how best to approach their research.

“In short, Hoda Barakat helped us not only with the research content that dealt with her own writing, but she also encouraged us to take a fair and unbiased view during the research process itself,” Sawwan said.

“I think the opportunity to have Barakat among us here at U.Va. is fundamental and crucial to our graduate work,” Shihab said. Barakat’s books – which touch upon many topics in Middle Eastern studies, including anthropology, psychology and politics – are “documentary writings, which transfer and amplify the voice of the oppressed people under such civil conflicts,” he said.

While Barakat’s visit was the highlight of the course, the class also pioneered a teaching and learning initiative by videotaping each class and providing access to the daily discussions on the U.Va. Collab course site for Al-Samman’s students. This new method of teaching was sponsored by the Arts & Sciences Center for Instructional Technology to assist with the gap in language comprehension levels between students learning Arabic and to facilitate a new way of teaching foreign language literature, while providing students the opportunity to return to in-class discussions as a learning tool.

“We will have [these videos] for posterity, for this course and everything else that relates to Hoda Barakat’s work,” said Al-Samman, who will continue teaching Barakat’s literature in upcoming semesters.

During Barakat’s residency, she also engaged with the community in a roundtable discussion and a video screening of “An Egyptian Salad” as part of the U.Va. Institute of World Languages film series.

Barakat’s community discussions highlighted her work and personal experience, but also focused on similarities between cultures, noting that family and personal connections prove to be stronger than political borders.

It’s Copperhead Season in Virginia. Here Is What You Need to Know END_OF_DOCUMENT_TOKEN_TO_BE_REPLACED

What’s Next for UVA’s Class of 2022? END_OF_DOCUMENT_TOKEN_TO_BE_REPLACED