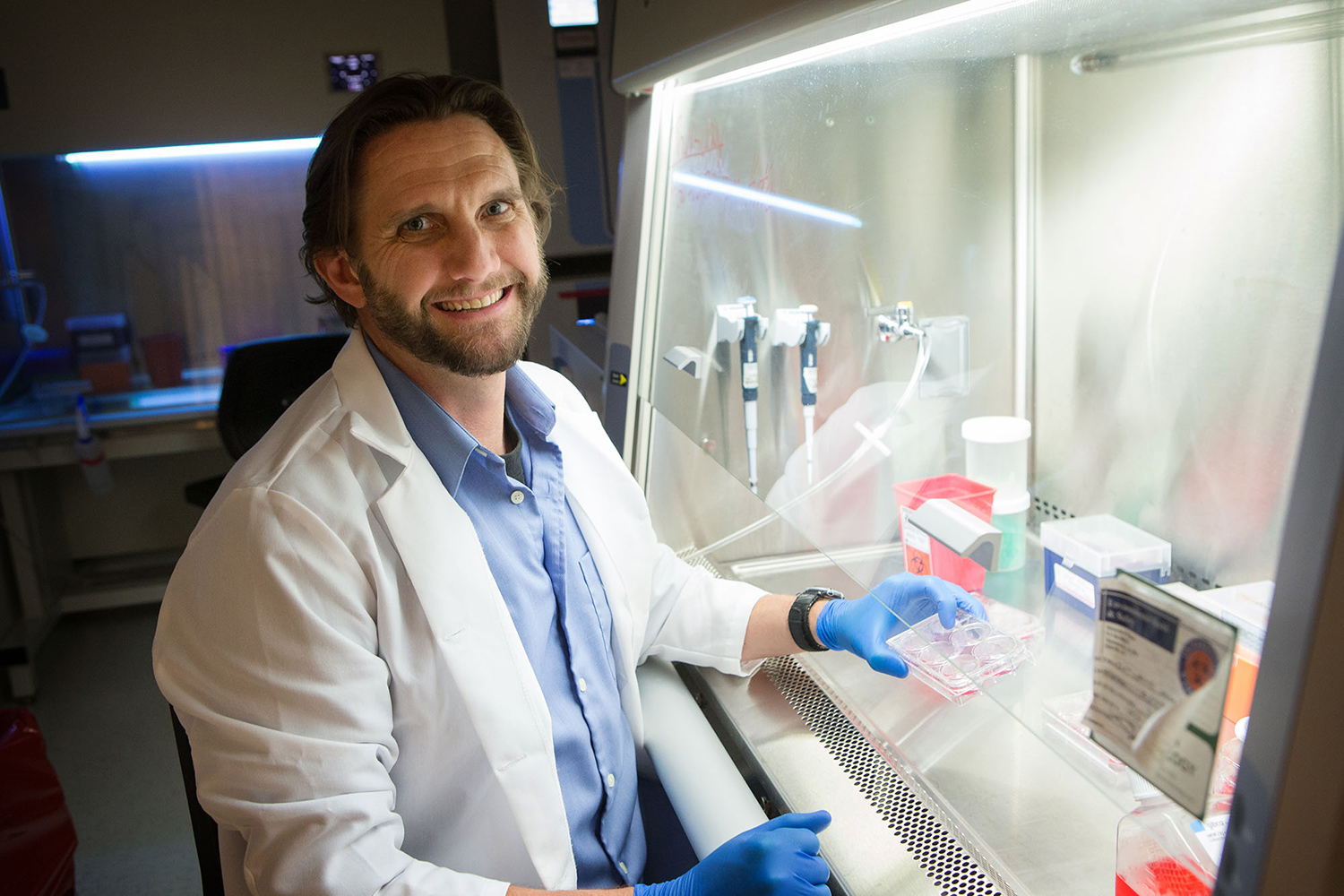 Michael McConnell is an assistant professor in the School of Medicine’s Department of Biochemistry and Molecular Genetics. (Photo by Dan Addison, University Communications)

McConnell and a team of nationwide collaborators discovered a genetic “mosaic” in the brain’s neurons, proving that brain cells are not exact replicas of each other, and that each individual neuron contains a slightly different genetic makeup.

McConnell, an assistant professor in the School of Medicine’s Department of Biochemistry and Molecular Genetics, has been using this new information to investigate how variations in individual neurons impact neuropsychiatric disorders like schizophrenia and epilepsy. With a recent $50,000 grant from the Bow Foundation, McConnell will expand his research to explore the cause of a rare genetic disorder known as GNAO1 – so named for the faulty protein-coding gene that is its likely source.

GNAO1 causes seizures, movement disorders and developmental delays. Currently, only 50 people worldwide are known to have the disease. The Bow Foundation seeks to increase awareness so that other probable victims of the disorder can be properly diagnosed and to raise funds for further research and treatment. 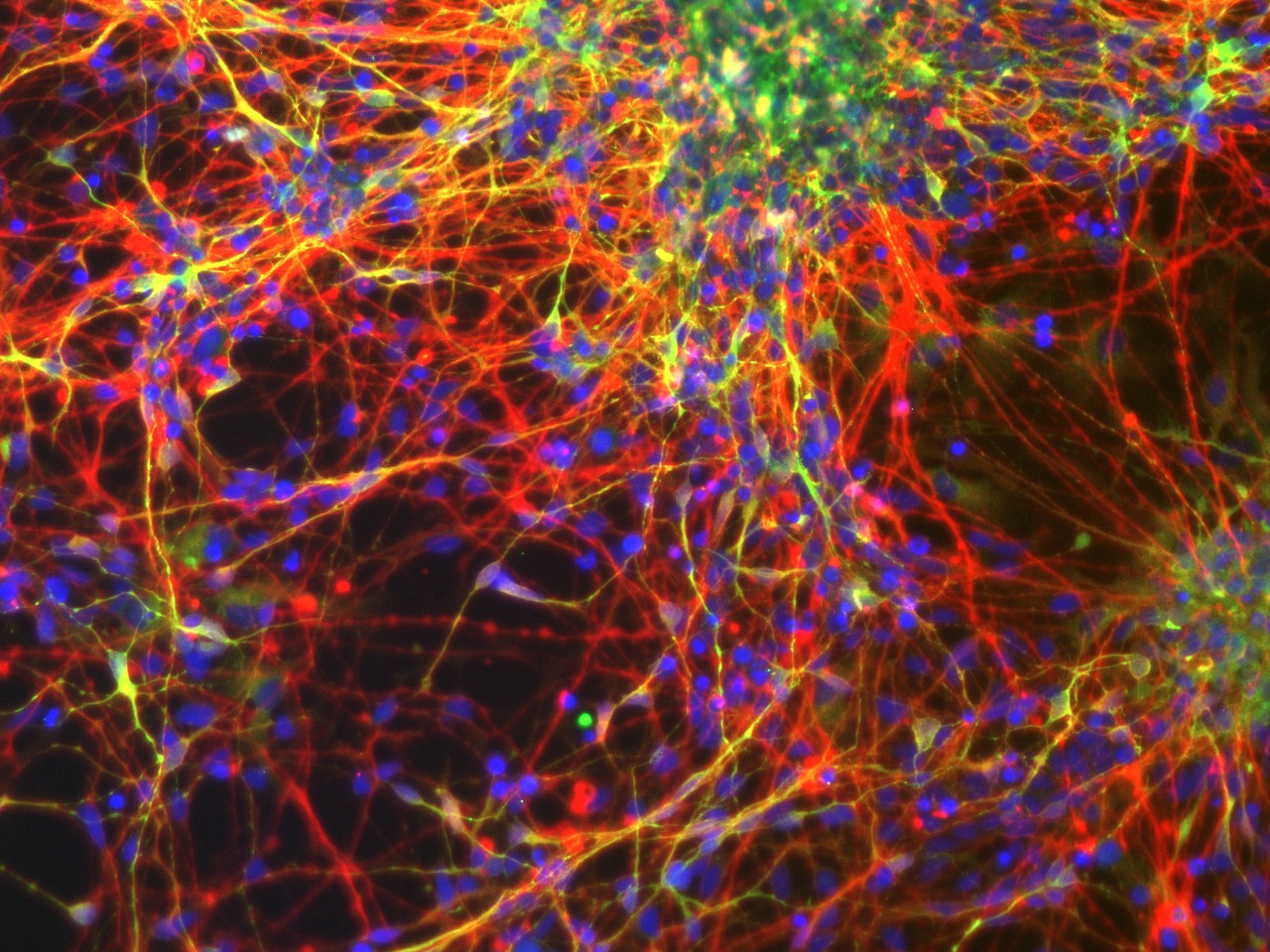 UVA Today recently sat down with McConnell to find out more about how GNAO1 fits into his broader research and what his continued work means for all neuropsychiatric disorders.

Q. Can you explain the general goals of your lab?

A. My lab has two general directions. One is brain somatic mosaicism, which is a finding that different neurons in the brain have different genomes from one another. We usually think every cell in a single person’s body has the same blueprint for how they develop and what they become. It turns out that blueprint changes a little bit in the neurons from neuron to neuron. So you have slightly different versions of the same blueprint and we want to know what that means.

The second area of our work focuses on a new technology called “induced pluripotent stem cells,” or iPSCs. The technology permits us to make stem cell from skin cells. We can do this with patients, and use the stem cells to make specific cell types with same genetic mutations that are in the patients. That lets us create and study the person’s brain cells in a dish. So now, if that person has a neurological disease, we can – in a dish – study that person’s disease and identify drugs that alter the disease. It’s a very personalized medicine approach to that disease.

Q. Does cell-level genomic variety exist in other areas of the body outside the central nervous system?

A. Every cell in your body has mutations of one kind or another, but brain cells are there for your whole life, so the differences have a bigger impact there. A skin cell is gone in a month. An intestinal cell is gone in a week. Any changes in those cells will rarely have an opportunity to cause a problem unless they cause a tumor.

Q. How does your research intersect with the goals of the Bow Foundation?

A. Let me back up to a little bit of history on that. When I got to UVA four years ago, I started talking quite a lot with Howard Goodkin and Mark Beenhakker. Mark is an assistant professor in pharmacology. Howard is a pediatric neurologist and works with children with epilepsy. I had this interest in epilepsy and UVA has a historic and current strength in epilepsy research.

We started talking about how to use iPSCs – the technology that we use to study mosaicism – to help Howard’s patients. As we talked about it and I learned more about epilepsy, we quickly realized that there are a substantial number of patients with epilepsy or seizure disorders where we can’t do a genetic test to figure out what drug to use on those patients.

Clinical guidance, like Howard’s expertise, allows him to make a pretty good diagnosis and know what drugs to try first and second and third. But around 30 percent of children that come in with epilepsy never find the drug that works, and they’re in for a lifetime of trial-and-error. We realized that we could use iPSC-derived neurons to test drugs in the dish instead of going through all of the trial-and-error with patients. That’s the bigger project that we’ve been moving toward.

The Bow Foundation was formed by patient advocates after this rare genetic mutation in GNAO1 was identified. GNAO1 is a subunit of a G protein-coupled receptor; some mutations in this receptor can lead to epilepsy while others lead to movement disorders.

We’re still trying to learn about these patients, and the biggest thing the Bow Foundation is doing is trying to address that by creating a patient registry. At the same time, the foundation has provided funds for us to start making and testing iPSCs and launch this approach to personalized medicine for epilepsy.

In the GNAO1 patients, we expect to be able to study their neurons in a dish and understand why they behave differently, why the electrical activity in their brain is different or why they develop differently.

Q. What other more widespread disorders, in addition to schizophrenia and epilepsy, are likely to benefit from your research?

A. I’m part of a broader project called the Brain Somatic Mosaicism Network that is conducting research on diseases that span the neuropsychiatric field. Our lab covers schizophrenia, but other nodes within that network are researching autism, bipolar disorder, Tourette syndrome and other psychiatric diseases where the genetic cause is difficult to identify. That’s the underlying theme.

Here Is What You Need to Know About the New Coronavirus Variant, Omicron END_OF_DOCUMENT_TOKEN_TO_BE_REPLACED

Fall Is in the Air on Grounds END_OF_DOCUMENT_TOKEN_TO_BE_REPLACED

Meet the Cats and Dogs Your CVC Donation Supports END_OF_DOCUMENT_TOKEN_TO_BE_REPLACED