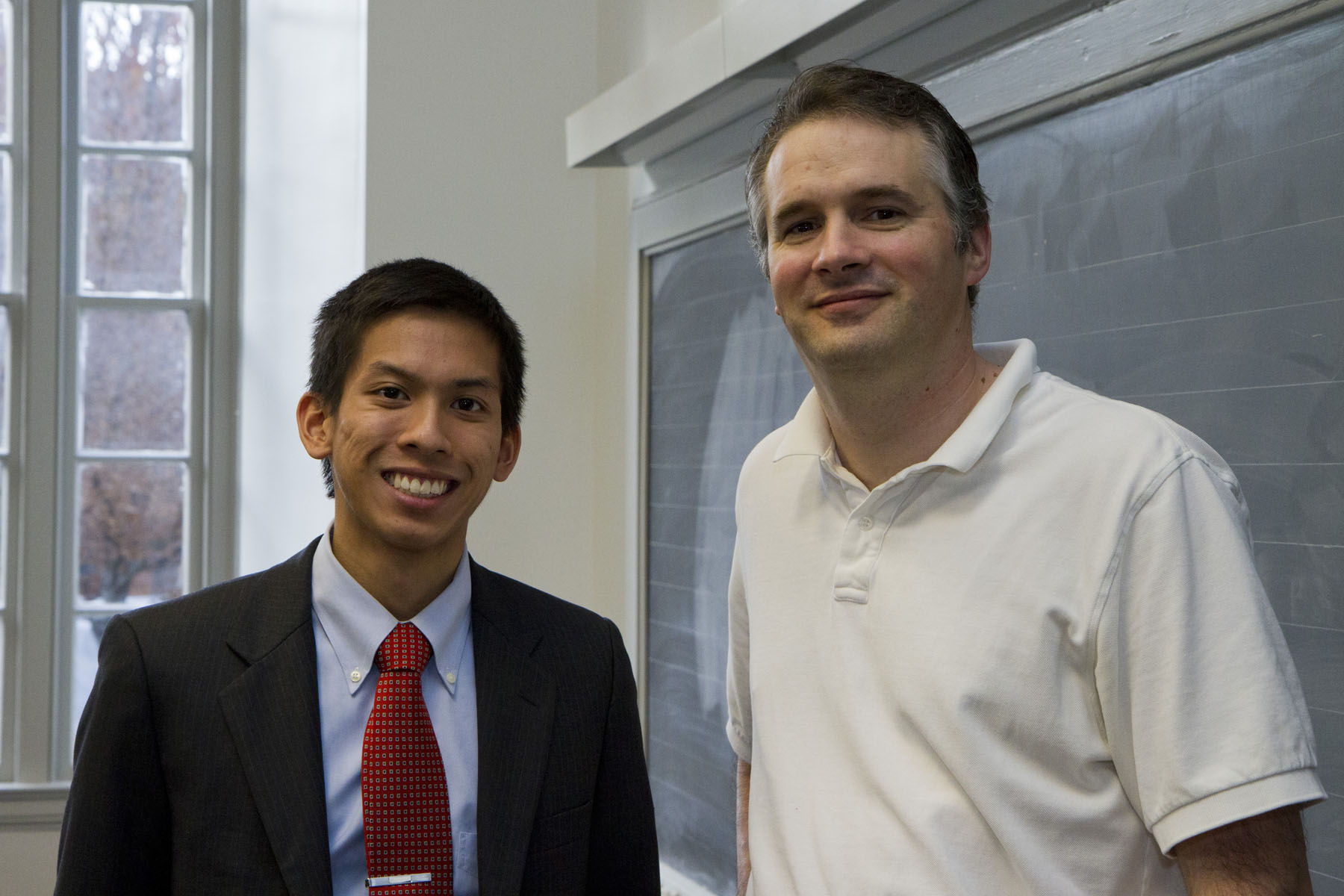 Listen to the UVA Today Radio Show report on this story by Brevy Cannon:

November 22, 2010 — More than 10 million American diabetics may have just gotten a small step closer to avoiding the onset of diabetes-related blindness, thanks to a University of Virginia-developed retina camera.

Their hand-held retina camera, dubbed the "CavCam," is built on consumer camera technology to keep the cost around $1,000, a price point that enables primary care physicians to screen for diabetes-related eye disease, just as they do other low-cost diagnostics like taking blood pressure.

That's a key breakthrough. Up to 90 percent of diabetes-related eye disease can be prevented if diagnosed in time, but the only way to get close to that 90 percent is through screenings by the nation's army of 200,000-plus primary care providers, Tran explained during his 10-minute presentation, which was followed by 10 minutes of questioning from with Entrepreneurship Cup's three-judge panel.

The American diabetes epidemic is overwhelming the capacity for screening by eye specialist doctors; more than 26 million Americans are already diagnosed with diabetes, with 1.5 million new cases each year. Of those, almost 40 percent could go blind if their diabetes is unchecked.

"We don't have enough optometrists and ophthalmologists to do the screening needed, even if that's all they did all day long," Yates said.

Around 2005, while he was a resident ophthalmologist at Harvard University, Yates first got the idea to make a retina camera based on consumer camera technology that would be easy enough to use by a non-specialist. "I kept waiting and waiting for someone out there to come up with this solution, and finally just said, 'Let's just do it ourselves.'"

Successfully adapting a consumer camera involved overcoming several engineering challenges to enable autofocus, auto exposure and proper lighting of the back of the eye. After seven years and numerous prototypes, and with help from Tran since 2008, Yates and the U.Va. Ophthalmology Research Lab eventually solved those challenges by developing patent-pending technology utilizing lasers and infrared light. As a result, the CavCam produces images comparable to those made by currently available retina cameras, which cost between $25,000 and $100,000.

The real potential value of the CavCam is not just to prevent blindness for millions; it's greatest value, Yates explained, will be as a diabetes indicator and source of motivation for diabetes patients to change their lifestyle in time to reverse the disease.

Diabetes-driven changes to microvessels in the eye (which can eventually cause blindness) mirror diabetes-driven damage to larger vessels in the body, which accumulate silently. A patient often learns of the damage only with their first heart attack or first stroke. At that point, it's too late to prevent major health problems.

Detecting such changes in the retina serves as a "canary in the coal mine." When Yates can point to a patient's retina photograph and give a concrete warning like, "You're on track to go blind in two or three years," he said, people's fear of going blind can serve as a strong motivator to make fundamental lifestyle changes. "This gives them an opportunity for intervention."

The U.Va. Entrepreneurship Cup was created last year to support ideas like the CavCam explained Thomas C. Skalak, vice president for research, whose office co-sponsors the competition along with the Darden School of Business, with support from Third Security LLC, a venture capital firm specializing in biotechnology and life sciences, and Hearst Business Media, a division of the Hearst media empire focused on business-to-business information services and trade publications.

"At a university, we educate, we create new knowledge, and we have the desire to move the knowledge to the world, where it can make a difference for people," Skalak said during the award ceremony in Monroe Hall. "That's why we care very much about this competition – it brings the talent out of the classrooms and connects the talents and the new ideas with the rest of the world."

U.Va. President Teresa Sullivan also was on hand for the awards ceremony.

"A university is a place for ideas above all," she said. "The kinds of ideas that we heard today are the building blocks of the new economy for the 21st century. It's something we really need. Americans have long been proud of their prowess as entrepreneurs. All of you are a sign that the next generation will bring plenty of entrepreneurship and great ideas to market."

Second place and $10,000 was awarded to Bars Dude, a service that provides college students with text message coupons for nearby bars and restaurants. The concept was developed by McIntire School of Commerce students Stephanie Deichman, Aaron Kur, Bill Igou and T.J. Wootton, and School of Engineering and Applied Science student Eric Trouton.

One of two honorable mention awards of $5,000 was given Pix by Post, Darden student Brianne Warner's concept for a software connected to Facebook, Flickr, SmugMug and other photo-sharing sites that streamlines sending a physical print of digital photos to friends and family. The prints are free, paid for by selecting a coupon for your friend that comes with the photo.

The other $5,000 honorable mention award went to The Treasure Hunt, a free, online, interactive lottery game wherein players collectively "dig" for cash and other prizes hidden behind certain pixels on a map image. The prizes are paid for by sales of targeted advertising. The team was Whit Hunter, College of Arts & Sciences; Nitya Reddy, Curry School of Education; and Jack Aspinwall and Caroline Darby, McIntire School of Commerce.

The judges were Jack Biddle, co-founder and partner of Novak Biddle Venture Partners, a venture capital fund with $600 million under management; Jeneanne Rae, co-founder and president of Peer Insight LLC and an expert in design strategy and innovation, named one of BusinessWeek magazine's "Magnificent Seven Innovation Gurus" and "Best Leaders of the Year"; and Charles Tuchinda, the chief innovation officer for health care at Hearst Business Media.

"That was a lot of fun," said Biddle, who volunteered to serve again next year as a judge. "Each team had given a lot of thought about what it would take to make their business successful."

"A lot of people on this campus are working very hard to promote the idea that entrepreneurship is not just something that businesspeople do," said Philippe Sommer, director of entrepreneurship programs at Darden, who noted how preliminary school-based competitions held between Nov. 6 and 11 had whittled down 181 business plans – created by more than 300 students from eight of U.Va.'s 11 schools – to the seven finalist teams that made their pitches on Friday.

"Entrepreneurship is a state of mind," Sommer said. "It's about going out and being master of your own destiny."

The winning team emerged from an earlier round of competition open to teams from the School of Medicine and School of Nursing, so the U.Va. Cup trophy will be on display in the team's 'home' school – the Medical School – until next year's competition.

The winning team's name will be engraved on a U.Va. Cup medallion, a copy of which will take its place in the U.Va. Cup trophy, where it magnetically levitates within a spiraling band of bronze engraved with a quote from U.Va. founder Thomas Jefferson: "I like the dreams of the future better than the history of the past."