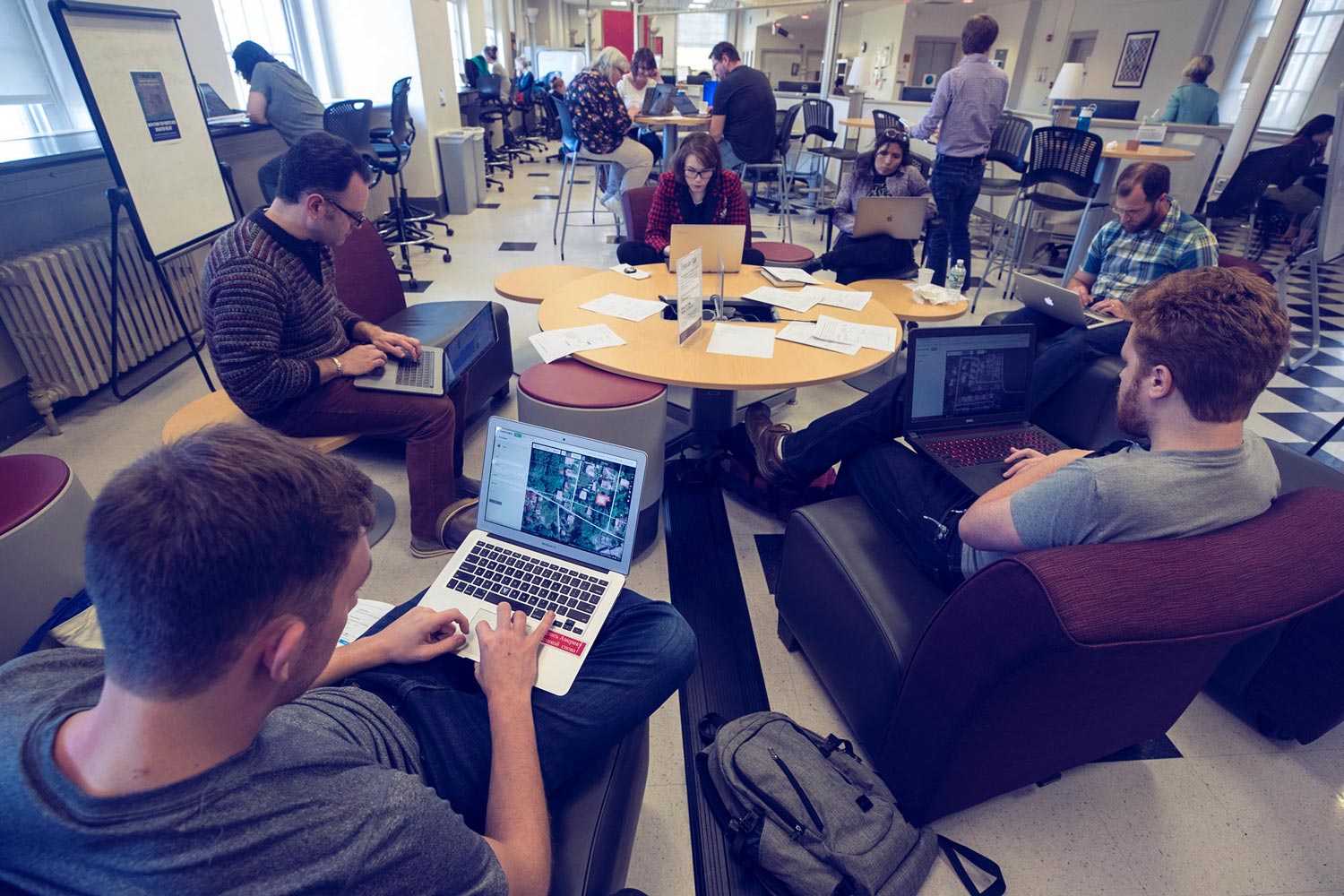 For remote Puerto Rican communities dealing with the devastating aftermath of Hurricane Maria, accurate maps can mean the difference between receiving critical supplies and facing another day of shortages.

On Thursday afternoon, groups of volunteers gathered in the University of Virginia’s Scholars’ Lab for a “Mapathon for Puerto Rico Disaster Relief.” The event was part of a nationwide effort involving multiple universities to update the open-source maps that relief agencies like FEMA and the Red Cross are using to guide workers on the ground in the hard-hit U.S. territory.

It is an urgent mission: six weeks after the Category 5 hurricane struck Puerto Rico, the death toll is still mounting, 70 percent of the island remains without power and many communities are desperate for basic necessities like drinking water, food and medicine. Relief agencies are trying to get supplies to remote communities, but have struggled to navigate the more than 1,500 roads and bridges damaged during the storm.

Trained by Scholars’ Lab and UVA Library staff, students and faculty members worked together to review satellite images of Puerto Rico taken after the storm and compare them with maps created by other universities, carefully double-checking the locations and conditions of key bridges and buildings.

“There is a big community of scholars at many universities who are willing to help out with this,” said Brandon Walsh, head of graduate programs in the Scholars’ Lab and one of the event organizers.

Walsh said the mapathon was a great opportunity to connect digital scholarship efforts at UVA with humanitarian efforts worldwide. That mission, he said, is “very much in keeping” with other ongoing work at the Scholars’ Lab, where a team of geographic information system, or GIS, specialists regularly host mapping workshops and assist students and faculty with research.

“The mapathon is another example of how you can use technology and digital humanities scholarship for humanitarian and social justice issues,” Walsh said.

Other efforts within the library have focused on editing and updating information available on crowd-sourced sites like Wikipedia. Teaching and Learning Librarians Paula Archey and Maggie Nunely, who helped Walsh organize Thursday’s mapathon, have led several daylong Wikipedia sessions, inviting students and faculty to create entries for the crowd-sourced online encyclopedia and ensure entries are balanced and accurate.

The first session focused on adding information about slavery and civil rights history at UVA to Wikipedia and creating new entries on Wikipedia or the hyper-local “Cvillepedia.” They researched and wrote entries for historical figures like Henry Martin, who was born into slavery at Monticello and worked as the University’s bell ringer from 1847 to 1909, and William and Isabella Gibbons, a couple who were enslaved by different University professors until 1865 and, once emancipated, worked as a minister and teacher. They also added information to Wikipedia aggregation pages like “African-American history of Virginia.”

“We had community members, faculty members and students all coming in to help,” Archey said. “We realized that many of the people who had helped build UVA did not have Wikipedia entries.”

Other sessions have focused on creating Wikipedia entries for female artists, part of a global “Art + Feminism” editing project drawing attention to female artists previously underrepresented on the site.

“These sessions help expose the problems with sites like Wikipedia, and have important conversations about who creates information and what biases might be in that information,” Nunely said. “It is particularly great for undergrads, because it is a really tangible way to help them create information in ways they might not have considered before.”

Events like the editing sessions or the mapathon also allow students to play a role in accurately preserving current events for posterity.

“They can directly affect the curation of historical record, as it is happening around us,” Walsh said.

That’s exactly what they did on Thursday, and for a good cause: expediting relief for the people of Puerto Rico.

What’s Next for UVA’s Class of 2022? END_OF_DOCUMENT_TOKEN_TO_BE_REPLACED