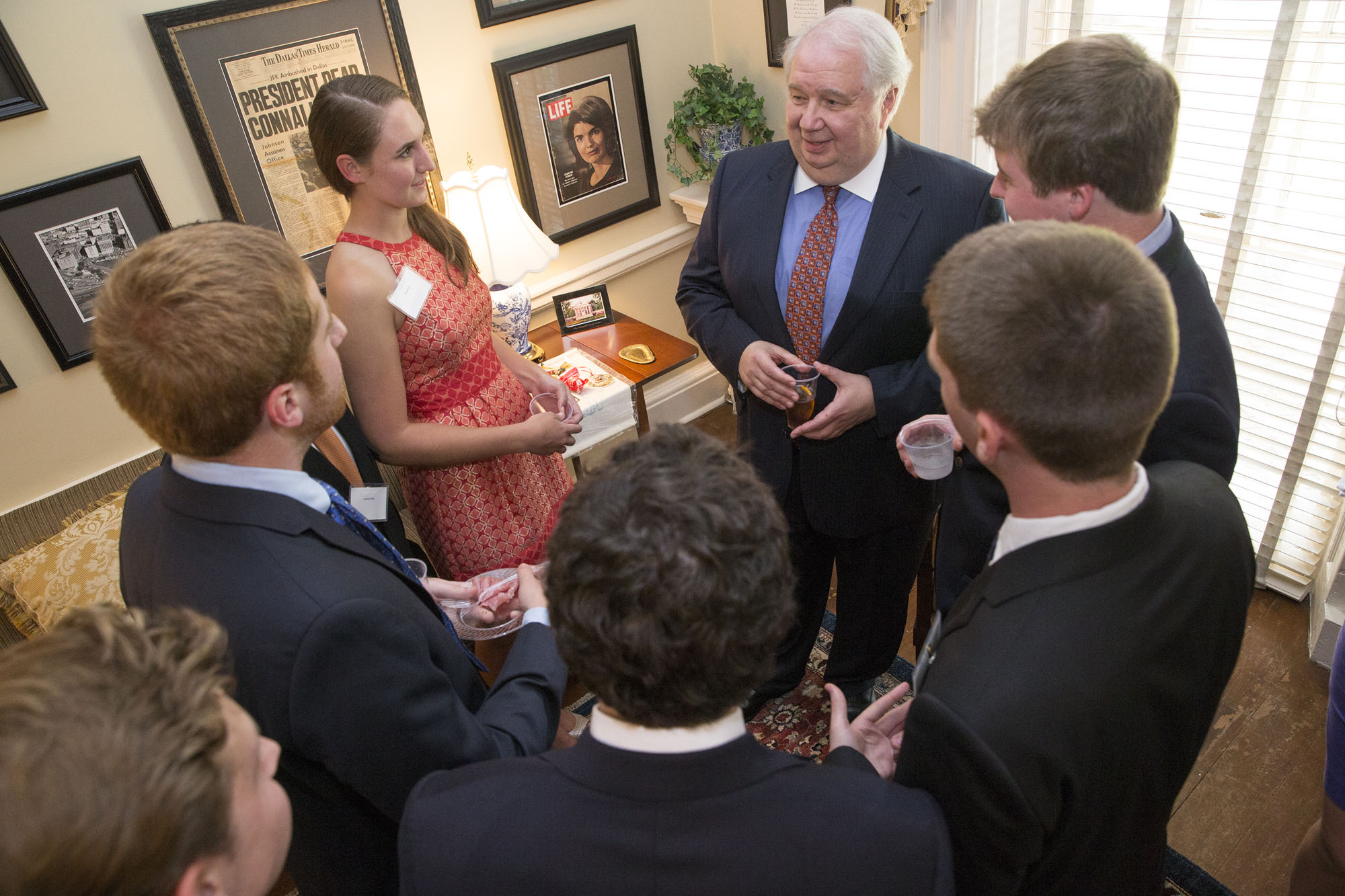 That is what Russia’s ambassador to the United States said Ukraine must do to end hostilities in eastern Ukraine, where pro-Russian separatists are fighting for control. Speaking Tuesday evening to more than 400 people at the University of Virginia, Sergey Kislyak painted a picture of Russia as a passive observer in the situation.

“The biggest problem in Ukraine is that the government in Kiev, instead of talking to their own people, started bombing. And by bombing, they create more and more opposition to Kiev,” said Kislyak, arguing that the conflict is not between Russia and Ukraine, but between Ukraine and its own people.

The ambassador presented Russia’s interpretation of the hotly contested international crisis, presenting students and others in the University community with an opportunity to hear from a seasoned diplomat.

The presentation also elicited commentary on Twitter, including from U.Va. Russian literature scholar Andrew Kaufman, who has written about Russia for the Daily Beast and was in the audience.

Kislyak denied that Russia annexed Crimea from Ukraine in the spring, saying the predominantly Russian population in the region asked Russia to step in. “They voted for their independence, and when they voted they asked Russia to accept them,” he said. Kislyak also said if Russia had not intervened in Crimea, the region would be awash in the “bloodbath” that is taking place in eastern Ukraine. More than 2,000 people have been killed since hostilities erupted in the spring.

"I do not accept the notion of us annexing anything." - Kislyak, on Crimea.


Allen Lynch, a U.Va. politics professor and Russia expert, said it was interesting that Kislyak painted Russia as passive on Ukraine, because the diplomat also said during his remarks that Moscow would “fight to defend its interests, whether it involves negotiating or not, when it feels those interests are threatened.”

“And it does feel like its interests are threatened in Ukraine and Russia is not merely a passive observer,” Lynch said.

Lynch said it is true there are profound local issues at stake between the government in Kiev and the eastern and southern regions of the country. “At the same time, it is also true that the government in Russia has played an enormous role in reinforcing, instigating and even exacerbating these tensions and these conflicts,” he said.

Kislyak used the bulk of his time to take questions from the audience of students, staff, faculty and community members.

Kislyak is fielding questions from the audience: "If you want my words of welcome to Americans, you can pass it." pic.twitter.com/v0c5iZwCdA

He said the West cannot appreciate the intense cultural connections between Russia and Ukraine, former members of the Soviet Union. “We know much better than our American friends, because Russia is so intertwined with Ukraine. ... We have families half in Russia and half in Ukraine. The economies have always been so intertwined,” he said.

Ukrainian President Petro Poroshenko has said the only way toward peace is enforcing borders and stopping the weapons it says Russia is supplying rebels.

Last week, NATO Secretary General Anders Fogh Rasmussen issued a statement saying “Russian artillery support – both cross-border and from within Ukraine – is being employed against the Ukrainian armed forces.” He accused Moscow of a “blatant breach of Russia’s international commitments and a further violation of Ukraine’s sovereignty by Russia.”

The Russian ambassador’s talk was hosted by U.Va.’s Center for Politics, the Center for Global Inquiry and Innovation and the Center for Russian, East European and Eurasian Studies. Before speaking in the Newcomb Hall Theater, Kislyak spent an hour with students, faculty and others at a reception in Pavilion IV on the Lawn.

Do You Know the History of Your Favorite Corner Spots? END_OF_DOCUMENT_TOKEN_TO_BE_REPLACED

Netflix to Add Ads. Why This Could Be a ‘Game-Changer’ for Your Viewing Experience END_OF_DOCUMENT_TOKEN_TO_BE_REPLACED

What’s Next for UVA’s Class of 2022? END_OF_DOCUMENT_TOKEN_TO_BE_REPLACED