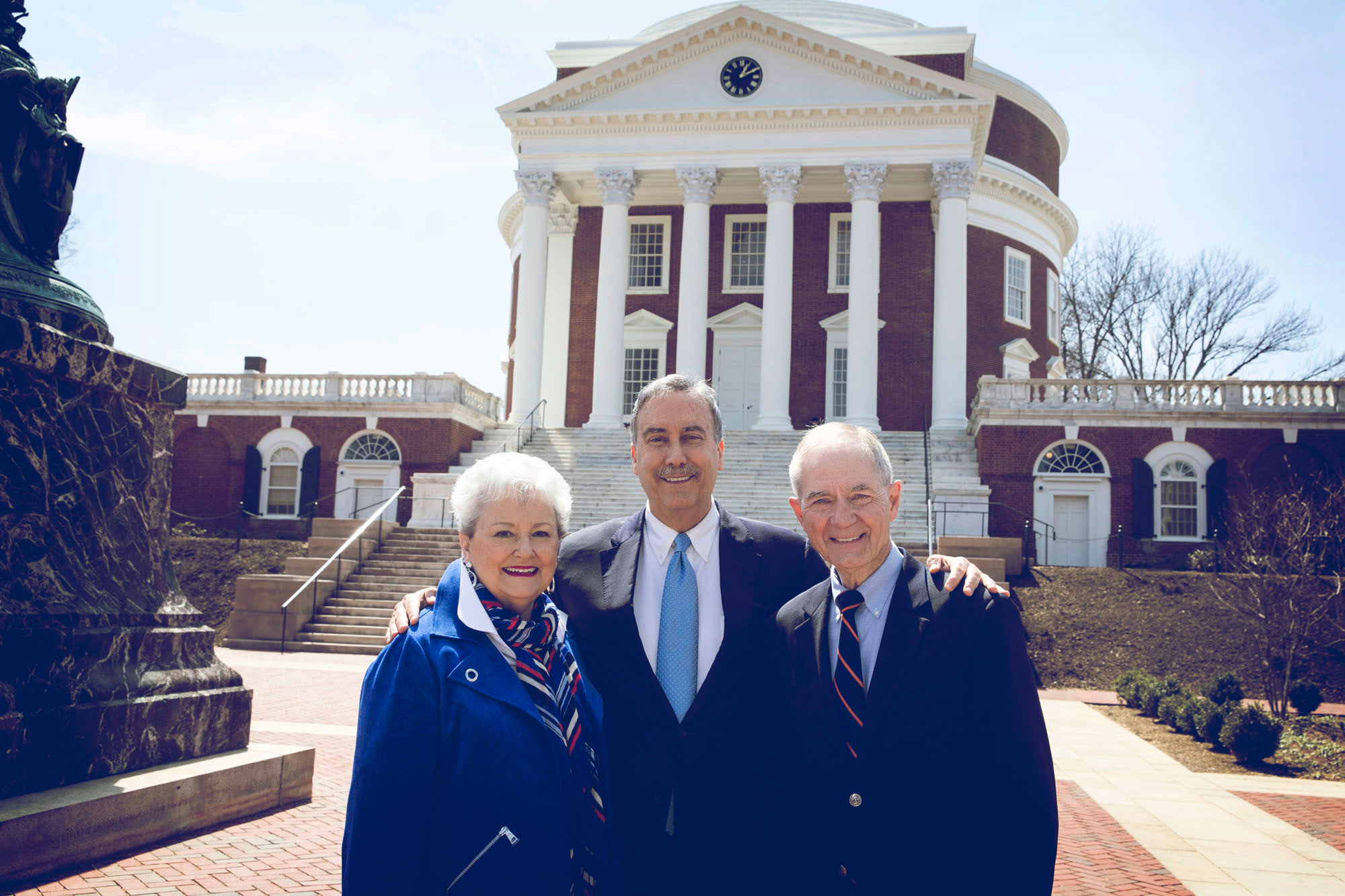 Years after his 2011 retirement, Leonard W. Sandridge remains one of the most respected administrators ever to serve at the University of Virginia. The former executive vice president and chief operating officer and his wife, Jerry, became integral parts of the UVA community in the 44 years he worked on Grounds.

This spring, in recognition of the Sandridges’ years of dedication to UVA, professor Larry J. Sabato, founder and director of the UVA Center for Politics, has donated $100,000 to the University to launch the Leonard and Jerry Sandridge Bicentennial Scholars Fund.

“Over many decades, Leonard and Jerry have helped to build the modern University of Virginia in very significant ways,” Sabato said. “They have always put the institution first, and done the right things to push us forward. Their positive imprint is found everywhere on Grounds.”

Of the many efforts he spearheaded at the University, Leonard Sandridge is well-known for his advocacy for access and affordability; he was one of the chief architects of the AccessUVA financial aid program. He and Jerry Sandridge remain committed to opening the doors of UVA to students of all backgrounds.

“We are honored to be associated with Larry’s commitment to the support of undergraduate students,” Leonard Sandridge said. “We have been privileged to work with outstanding individuals over the years who are devoted to the University, its students and the teaching, research and health care accomplished here. Larry has been a generous member of that group consistently since his days as a student.”

The new Sandridge Bicentennial Scholarship is a powerful nod to that commitment. It will provide need-based scholarships to out-of-state undergraduate students, making a world-class UVA education available to even more young minds.

Sabato’s gift sets the foundation for a lasting fund and is eligible for the Bicentennial Scholars Fund Matching Program. The Bicentennial Scholars Fund is a new, permanent endowment established by the Board of Visitors to support student scholarships. It could reach up to $300 million through a combination of philanthropic support and the UVA Strategic Investment Fund.

The related matching program is a commitment by the University to provide matching University funds for donations made to endowed undergraduate scholarships. Under the program, UVA will match any commitment to eligible endowed undergraduate scholarships of $100,000 or more with a 50-cent match on every dollar. If a donor wishes to commit $1 million or more and pay the total within one year, the University will match the commitment dollar for dollar. Sabato’s gift will receive $50,000 in matching funds from the Bicentennial Scholars Fund.

“Larry has a long legacy of supporting the University and has contributed more than $4 million to a variety of UVA causes over the years,” said Mark Luellen, vice president for advancement. “It was only a few days after the Bicentennial Scholars Fund was established that he said he wanted to participate.

“The fact that Larry wants to honor Leonard and Jerry with his most recent gift is fitting because the leadership that both the Sandridges and Larry continue to provide the University inspires us all on a daily basis.”

“Together, these scholarships assist families of our hard-working employees and allow us to attract worthy out-of-state students who add much to the educational experience for Virginians,” Leonard Sandridge said. “This gives us confidence that a UVA degree will be even more accessible to deserving individuals in the years ahead.”

Sabato would like to see the Sandridge Fund not only provide aid to more out-of-state students, but also serve as encouragement for his fellow alumni to make their own donations in support of UVA scholarships.

“The Bicentennial Scholars Fund is designed to make UVA’s third century even more successful than its first two,” he said. “To me, the fund represents what the Sandridges have consistently stood for: excellence. I hope all of our loyal alumni will think about joining this effort and supporting the Bicentennial Scholarship Program, so that we can continue to bring the nation’s best students to Charlottesville.”

A Year We Will Never Forget: 2019-20 in Review END_OF_DOCUMENT_TOKEN_TO_BE_REPLACED

‘What Will You Carry With You?’ Remarks From UVA President Jim Ryan END_OF_DOCUMENT_TOKEN_TO_BE_REPLACED