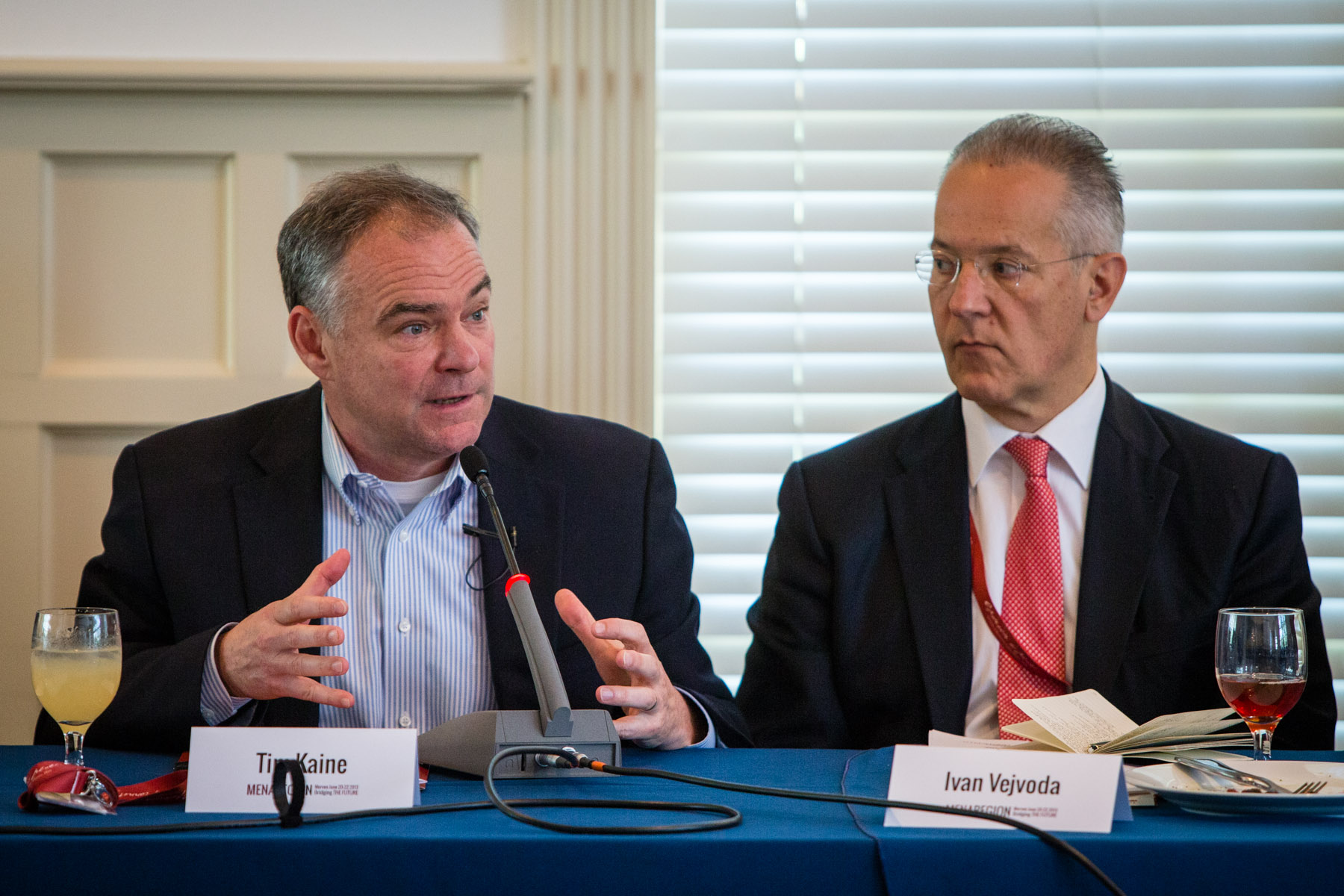 Sen. Tim Kaine (left) spoke at Morven Farm to a conference on promoting democracy in the Middle East and North Africa.

From the end of World War II until the fall of the Soviet Union, American foreign policy was focused on containing and counteracting Soviet influence around the world, a strategy known as the Truman Doctrine. Since the end of the Cold War and the breakup of the Soviet Union, America has yet to fully articulate a new guiding foreign policy principle, U.S. Sen. Tim Kaine, D-Va., explained Friday at the University of Virginia’s Morven Farm, speaking to a conference on promoting democracy in the Middle East and North Africa.

In the absence of a defining doctrine, American foreign policy has been largely ad hoc and improvisational crisis management, he said.

“That's not all bad,” Kaine said. “But we are searching for the next post-Truman Doctrine organizing principle around which we can define our interactions with the other nations of the world, whether around civil society or around military interactions.”

Kaine delivered his remarks to an audience of about 30 experts and leaders in international development from U.Va., the U.S. State Department, the Washington, D.C.-based Jefferson Institute and the German Marshall Fund. The latter two groups organized the conference in concert with the Presidential Precinct, said Stewart Gamage, director of U.Va.’s Morven Farm, which is part of the precinct.

Kaine summarized Obama’s foreign policy doctrine as “defend ourselves unilaterally, and promote our values multilaterally,” adding the caveat that “these are my words and no one else's.” The U.S. should always have the ability to defend itself unilaterally under any circumstances, Kaine continued, “But when it comes to promoting values we care about, I think President Obama believes, ‘If we can’t convince anybody to go along with us, then is the value that important, or is the value really at stake? Are we seeing it in a quirky or individualistic way?’

“The need to get multilateral partners is described and derided by some as leading from behind,” Kaine noted. “I think what the president would say is, ‘No. If you can’t get partners, then you have to look in the mirror and ask yourself, “Is the principal at stake important? Have I articulated it in a way to persuade others it is important? Is the principle really at stake in this issue, or isn't it?’”

Kaine offered American intervention in Libya as an example. Obama toiled to build a coalition of partner nations and gain United Nations support before taking action.

Since joining the Senate in January, Kaine has observed most fellow members of Congress laying out foreign policy visions that tend toward two basic poles, he said. One camp envisions the United States as the “indispensable nation.” Guided by “Americans’ noble impulse to get involved,” proponents of this view believe America should be involved whenever and wherever people are being killed or put in great risk, “especially if powerful others are helping squash them.”

The other camp believes America should be “the exemplary nation,” setting an example in how we train leaders, the kinds of assistance we offer and the kinds of investments we make, but without being “the one there on the ground, engaging in everything and doing it.”

“I see a lot of argument back and forth between those poles,” Kaine said. “I see some tension between those two visions as we still wrestle with our post-Truman Doctrine conceptualization of our role in the world.”

Kaine’s remarks sparked further discussion. “It's very tough to be the exemplary nation if, in fact, you are not clear domestically what kind of nation you want to be,” said Michael Haltzel, senior fellow at the Center for Transatlantic Relations at Johns Hopkins University, who noted that he had once worked for then-Sen. Joseph Biden on a Senate committee that deals with foreign policy. Noting the wide ideological divide and partisan rancor between Democrats and Republicans in Congress today, Haltzel said, “There has to be an intimate relationship between domestic and foreign policy.”

Articulating a new U.S. foreign policy vision may require appealing to Americans’ national pride with a vision for a new kind of American leadership, Kaine said.

The conference follows up on U.S. Secretary of State John Kerry’s U.Va. address, which highlighted the risks of an unstable Middle East/North Africa, and the important role of the Presidential Precinct in supporting the courageous architects and builders of young democracies in the region, Gamage said.

Kerry pointed to creative cross-cutting initiatives, like the Presidential Precinct, as models of action on this front, noted Aaron Presnall, president of the Jefferson Institute and a lead organizer of the conference.