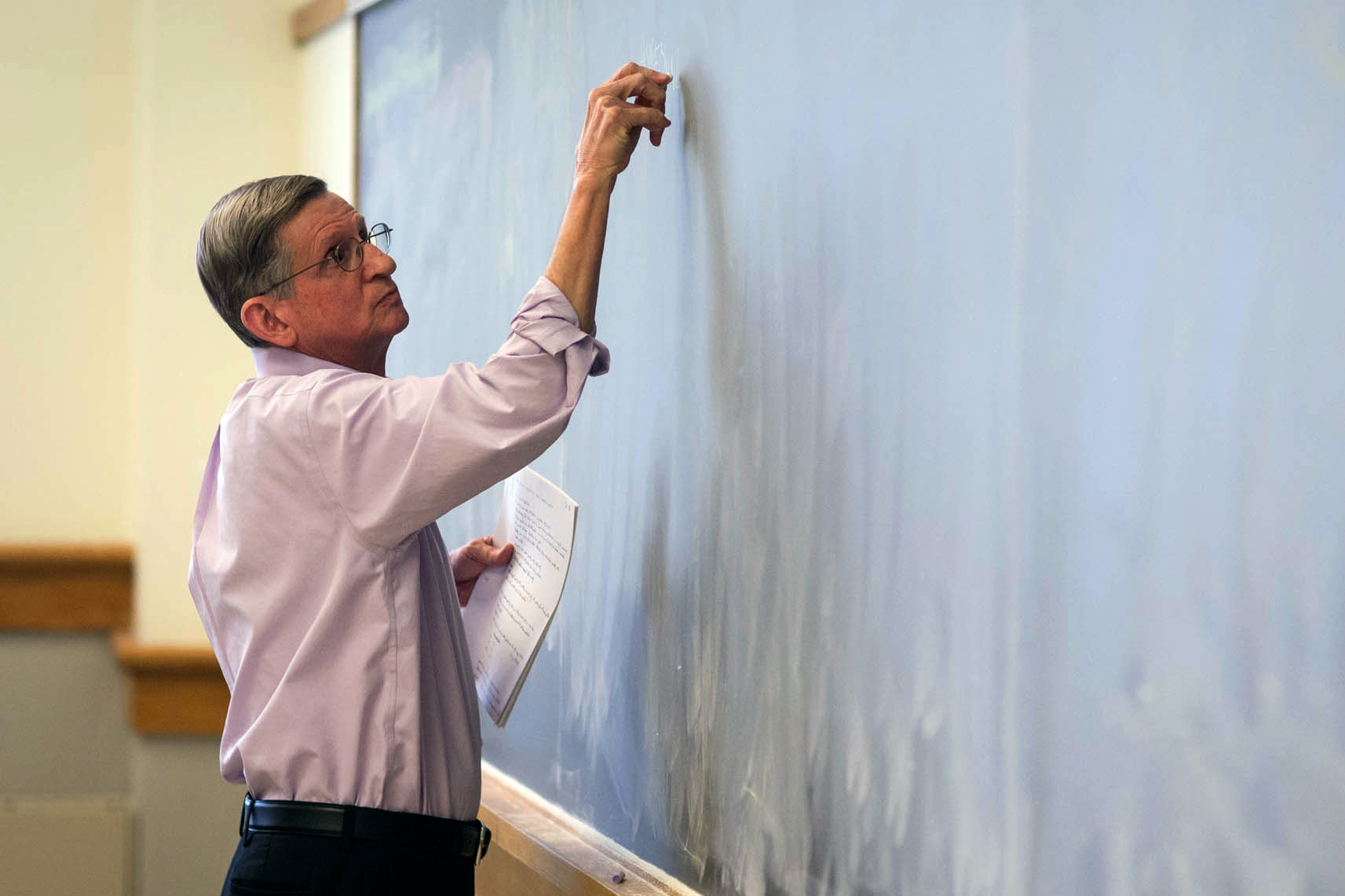 Economist Ed Olsen has studied low-income housing since the 1960s, and has frequently testified on the subject before Congressional committees. (Photo by Dan Addison, University Communications)

On Wednesday, University of Virginia economist Edgar Olsen testified before a subcommittee of the United States Senate Appropriations Committee to share his strategies for improving the current system of low-income housing assistance.

Olsen is a professor of economics and a professor of public policy in the Frank Batten School of Leadership and Public Policy. He began studying low-income housing assistance in the 1960s, shortly before joining the UVA faculty in 1970. He was one of only two economists in the country studying housing assistance and was invited to serve on President Richard Nixon’s Housing Policy Review Task Force in the early 1970s. In the decades since that appointment, he has testified before Senate and House committees several times, provided research and expertise to policymakers and generated some of the most respected studies in his field.

On Wednesday, Olsen spoke in a subcommittee hearing discussing better ways to house vulnerable families. He highlighted the benefits of offering rent subsidy vouchers for existing housing instead of continuing to subsidize the construction and maintenance of the subsidized housing projects that have proliferated in the U.S.

According to Olsen’s research, gradually switching major Housing and Urban Development assistance programs to a voucher-based model would eventually allow the government to assist 1.8 million more families without increasing spending.

UVA Today spoke with Olsen before he traveled to Washington to learn more about the research and suggestions he presented to the Senate.

Q. What key challenges do you hope to draw the committee’s attention to?

A. The current system relies mainly on programs whose cost is excessive for the housing provided, and it provides large subsidies to some low-income families while offering none to others in the same circumstances.

The Department of Housing and Urban Development defines “extremely low-income” households as those with incomes that are less than 30 percent of the local median. There are waiting lists of millions of people in this category, and I don’t think it is defensible to offer assistance to some, but not all, people in the same circumstances.

Currently, the federal government provides two broad types of housing assistance: public or privately owned subsidized housing projects that families must move into in order to receive assistance, and housing vouchers that allow families to find their own units. I propose phasing out project-based assistance in favor of the voucher-based program, as it is the most cost-effective. This would free up resources to provide housing for the millions on waiting lists.

Q. How could a switch to more voucher-based housing benefit extreme low-income families?

A. A switch to voucher-based programs would provide housing subsidies for more families without increasing government spending. I did a study to determine what would happen if we took the same amount of money being spent on the Housing and Urban Development department’s housing programs and used it to create more voucher programs. I found that 1.8 million more households could be served for the same amount of money. These results are based in part on entitlement housing voucher programs operated on an experimental basis in two small metropolitan areas. The reforms that I proposed would not lead to these results. They involve a smooth transition to the new system. But, the results show what we have to gain from making that transition.

The reforms I discussed in the hearing would result in better housing for recipients, especially for the additional people served. Voucher recipients have the freedom to choose the neighborhoods and housing units that best suit their families’ needs, whether that means living closer to jobs or near family who can provide child care. Research has shown that while voucher recipients do not move very far from where they were initially located, they do tend to choose better housing or nicer neighborhoods. In contrast, housing projects are usually in worse neighborhoods. Additionally, because new recipients would pay less for their housing, they have more to spend on other goods.

A. Many taxpayers want to help low-income families and individuals with their housing. The cost of building or maintaining housing projects is enormously greater than the cost of providing vouchers. Phasing out project-based programs in favor of voucher-based assistance would free up resources to serve more people without increasing spending. There is also potential for reducing taxes.

I would not presume to tell Congress how much to spend on housing assistance. That is a matter of personal and political preference. However, I can say something about how to use allotted taxpayer dollars to serve more people and offer quality options at the same cost. That is not a matter of preference, but of assessing the performance of the programs we already have.

Q. Voucher-based housing is more open to private market forces. How are those forces helpful in controlling cost?

A. If landlords don’t provide good housing for the money, voucher recipients can move to another unit without losing their subsidy. That is not the case for occupants of subsidized housing projects. Their owners have a captive audience. Indeed, some tenants have been threatened with eviction when they complain about the deplorable condition of their units.

There have been four major studies in every decade since the 1970s comparing how the total rent paid in voucher programs – the rent paid by the tenant and the government subsidy – compares to market rent of the unit. Results show very little difference between the two. Similar studies comparing total payments received by owners of housing projects– including all government subsidies – to market rent show that these payments are is 50 to 100 percent above market rents, meaning that tenants and the government are paying much more than they have to.

Costs could be further controlled by slightly lowering the amount offered through voucher subsidies, which currently allows tenants to live in units renting for about $1,000 per month and pay 30 percent of their income for it. That is a very generous subsidy that is roughly equivalent to the national average rent paid by non-subsidized renters. Slightly lowering it could allow the same amount of money to be spread over more extremely low-income families.

Q. Are there enough rental units available to voucher recipients?

A. Almost all of the people on waiting lists for subsidized housing are already housed, but are paying very large portions of their income in rent. Vouchers would pay part of their rent in their current unit without the government needing to subsidize the building of new housing projects. It is certainly true that some landlords won't participate, but the fraction of landlords contacted by people with vouchers who refuse to participate is not known. However, we do know that the unwillingness of some landlords to participate has not prevented the use of all vouchers available.

In terms of providing housing for the homeless, there are about 2 million vacant rental units in the country that would be affordable to families with vouchers, and about 600,000 homeless people per night. The units are there; the homeless simply do not have the ability to pay for them. Vouchers could help solve that problem.

Q. What key points do you hope senators take away from your testimony?

A. I hope they appreciate the defects of the current system and understand the important pieces of evidence showing the cost-effectiveness of different ways of delivering housing assistance. What I am suggesting is a general strategy for getting the program to a better place, by gradually phasing in more voucher-based assistance. Of course, current contracts and agreements must be honored. However, other methods could be considered when those expire.

I also hope that the appropriations committee will consider studying the cost-effectiveness of the Low-Income Housing Tax Credit Program, the biggest low-income housing program existing right now. We are spending about $15 billion a year on this program, but do not have high-quality studies of its cost-effectiveness that compare the program with a voucher-based model. That is something that the appropriations committee can act on, and something I hope they will consider.

Meet the New Cavalier on Horseback: She’s Eager To ‘Carry On a Legacy’ END_OF_DOCUMENT_TOKEN_TO_BE_REPLACED

Housing Changes Are a Breath of Fresh, Cool Air – Especially for Lawnies END_OF_DOCUMENT_TOKEN_TO_BE_REPLACED

Virginia Football – For All Virginia END_OF_DOCUMENT_TOKEN_TO_BE_REPLACED