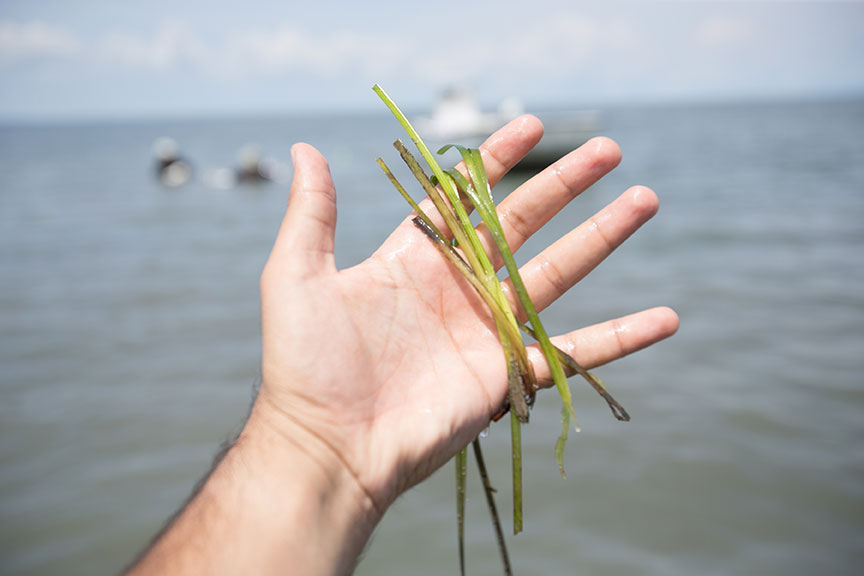 University of Virginia environmental scientists have co-authored a new methodology to encourage global coastal restoration on the voluntary carbon market for projects that help bring back carbon-storing tidal wetlands and seagrass meadows.

The protocol, which quantifies the greenhouse gas mitigation achieved by coastal restoration projects, has been adopted by the Verified Carbon Standard, a global benchmark for carbon management. It was presented last week at the international climate conference in Paris.

“Wetlands and seagrasses store more carbon in their soils and sediment than even terrestrial forests,” said Karen McGlathery, a UVA professor of environmental sciences who co-wrote the restoration guidelines for seagrass meadows. “Unfortunately, because of decreasing water quality and increasing development pressures along coastlines, many of the world’s seagrass meadows, wetlands and mangroves are being lost. This can release stored carbon from their soils into the atmosphere, thereby contributing to global warming.

“Our protocol is designed to help reverse that pattern.”

Mathew Oreska, a UVA environmental sciences graduate student and a Jefferson Fellow, helped develop the protocol for seagrass restoration, which is part of a larger wetlands/seagrass protocol authored by researchers at institutions from around the world.

The protocol, called Methodology for Tidal Wetlands and Seagrass Restoration, is the first globally applicable, greenhouse gas accounting plan for coastal wetland restoration, and will allow salt marsh, seagrass and other tidal wetland restoration projects to earn financial support from the purchase of carbon offsets.

These natural coastal systems provide wildlife habitat, improve water quality, protect coastlines from storms and also remove large amounts of carbon dioxide from the atmosphere through photosynthesis. This “blue carbon” is then stored in the seabed, where it can remain for centuries or more – unless the habitat is degraded or destroyed naturally or through human activity.

Studies by McGlathery, Oreska and others have shown that seagrass meadows are an important component of climate change as these meadows can store up to twice as much carbon as the world’s forests. Though seagrass meadows occupy less than 0.2 percent of the world’s oceans, they are responsible for more than 10 percent of all carbon buried annually in the ocean. Conserving and restoring these meadows, McGlathery said, may reduce atmospheric greenhouse gas levels and increase carbon stores and contribute to climate mitigation.

According to the methodology, each carbon-offset credit would certify the removal of one ton of carbon dioxide from the atmosphere. Coastal restoration projects that demonstrate a net removal of carbon by plants would receive a proportional number of credits from Verified Carbon Standard. Carbon credits are purchased by companies or individuals to offset the emissions they cannot reduce, creating a financial mechanism for restoration of habitats with a climate benefit.

Similar financing already is available to reforestation projects through initiatives offered by the United Nations. Prior to the new methodology, projects that restored coastal plants were not eligible to receive carbon credits.

Oreska and McGlathery have been measuring carbon sequestration in restored eelgrass meadows in the seaside bays of Virginia’s Eastern Shore, part of the world’s largest and most successful seagrass restoration project.