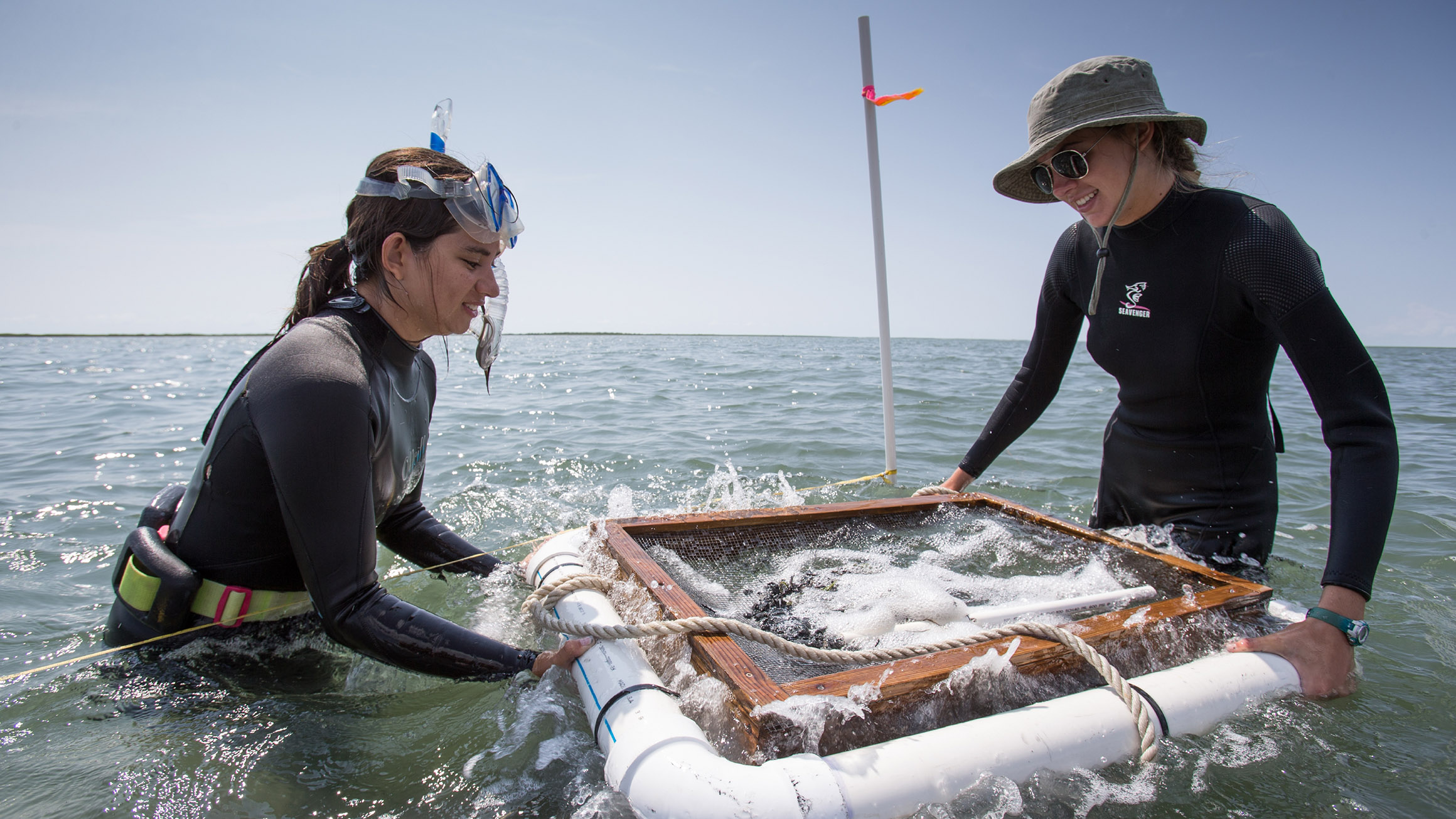 Seagrasses are crucial to the health of shallow coastal marine environments, in Virginia and worldwide. Seagrass meadows provide habitat and serve as nursery and feeding grounds to a diverse range of sea creatures – crustaceans, scallops, mollusks and fish. The meadows, made up primarily of eelgrass, are the basis of the food chain and help clear water of sediments that are detrimental to the growth of the grass itself, as well as to the animal species that depend on the meadows. 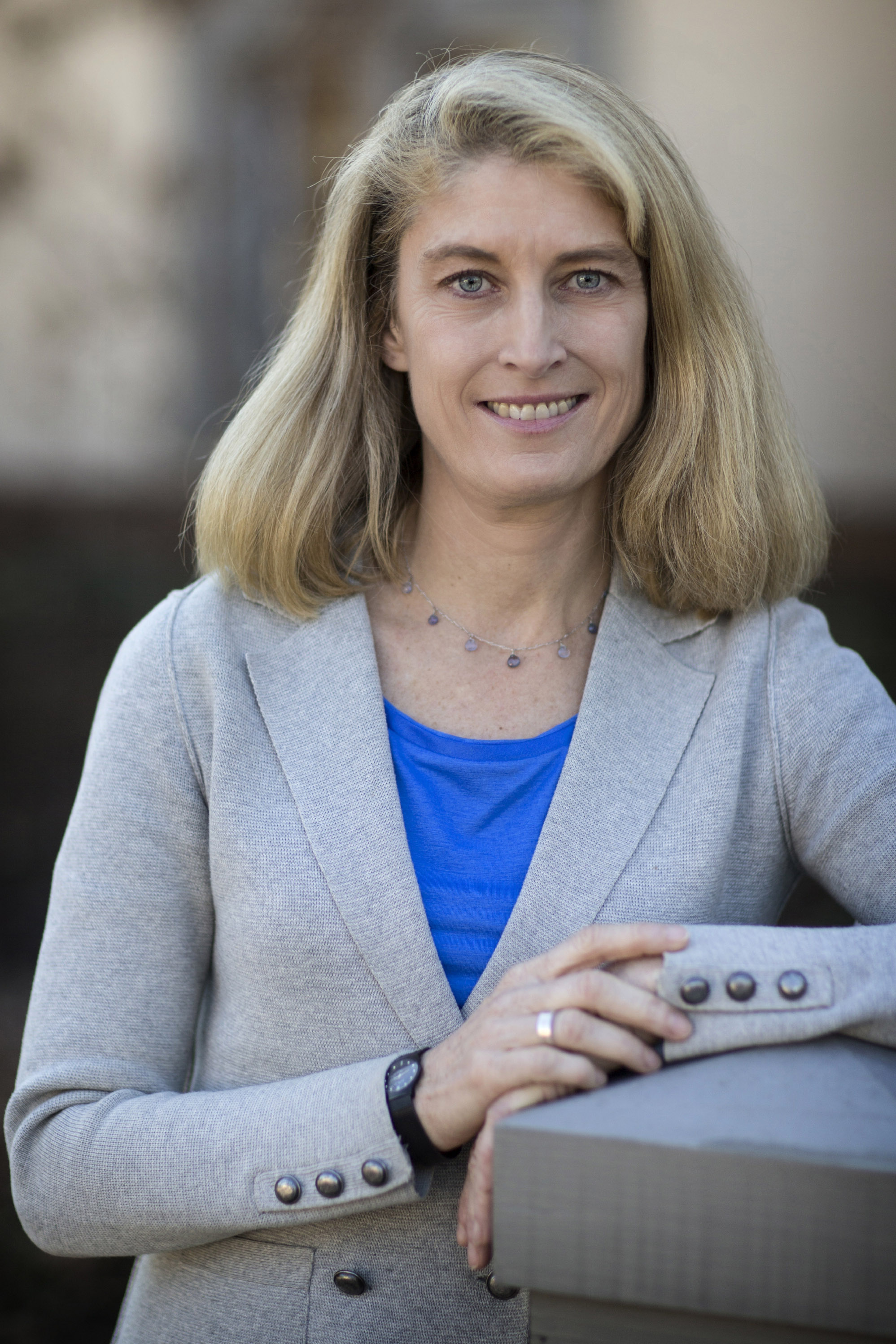 In the seaside bays of Virginia’s Eastern Shore, University of Virginia environmental scientists are working to restore seagrass to areas that had, for decades, become barren sand flats due to disease and storms. The work is conducted with funding from the National Science Foundation’s Long-Term Ecological Research project at UVA’s Anheuser-Busch Coastal Research Center.

The center’s director, Karen McGlathery, who is a professor of environmental sciences and the University’s associate vice president for research, sustainability and the environment, recently spoke with UVA Today science writer Fariss Samarrai about the importance of seagrass to Virginia and coastal environments around the world.

Q. You have been studying seagrass restored to Virginia’s seaside bays for several years now. How is the work progressing?

A. After over 70 years of absence, seagrasses are now flourishing in the coastal bays. It’s an incredible change; when I started working at the site in the mid-1990s, the seafloor of these shallow bays was barren sand. Now I can get out of the boat and swim as far as I can and see lush green meadows.

We are monitoring over 5,000 acres of restored seagrass habitat and this is recognized as the world’s largest seagrass restoration. Why are the seagrasses doing so well? One reason is that water quality in the Virginia coastal bays is very high. Often seagrasses are lost in areas that have been degraded by nutrient pollution or dredging. This is not the case for this part of Virginia, so there’s great potential for the seagrasses to spread throughout the coastal bays. It’s a real success story.

Q. Why did the original meadows die, and is there a risk of that happening again?

A. The seagrass meadows were decimated in the early 1930s by the confluence of a pandemic disease and a major hurricane. After the “Great Hurricane of 1933” – this was back before they named storms – the seagrass did not recover because there was no source of seeds nearby.

It was the discovery of a small patch by a local waterman in the late 1990s that spurred the large-scale restoration that brought seagrass back to the region. The disease (a slime mold) is still around in small numbers in various parts of the world, but we haven’t seen an outbreak like we did in the ’30s.

We know that plants already stressed are more likely to get infected. Over the last decade we have seen how high temperatures can impact seagrass. It’s possible that the restored meadows will become more vulnerable to a recurrence of the disease in the future if they are stressed by increasing ocean temperatures.

Q. You conducted a study a few years ago that showed that seagrasses are important not only to the health of shallow bays, but also to climate stability. How does that work?

A. Seagrass meadows are excellent at taking up carbon dioxide and storing it for long periods of time. Marine plants use carbon dioxide in photosynthesis, transform it and bury it in the sediment. They also capture carbon-rich particles floating in the water. This carbon can stay buried for hundreds, or even thousands, of years.

The concern is that seagrasses are among the world’s most threatened habitats and destroying them will release stored carbon back to the atmosphere. We are the first to show that seagrass restoration quickly reinstates the carbon sink. And based on these findings, we were asked to write the international protocol for issuing carbon credits for seagrass restoration.

Q. I understand you have some new, surprising findings regarding the recovery and importance of these grasses to ecosystems and local economies.

One surprising discovery is that seagrass meadows reduce erosion of nearby salt marshes by reducing wave energy, and in doing so increase coastal resilience to storms.

Q. Each year you have a new crop of graduate students and undergrads who go out to the Eastern Shore and conduct independent research. What do you expect them to accomplish in the coming years?

A. We’ve made great progress in understanding how the current seagrass restoration increases water quality, biodiversity and carbon storage. Now we want to use our long-term data and models to get a better sense of the potential for seagrass meadows to spread throughout the coastal bays. We also want to know how vulnerable they are to future scenarios of climate and land use change.

Q. What is the long-term goal of this research?

A. The Virginia coastal region is incredibly dynamic. We have the highest rate of sea-level rise along the U.S. Atlantic coast, and more than 15 more storms a year, on average, hit the coast than when the record began in the late 1800s. By linking our observational data, experiments and models, our goal is to understand how resilient these systems are to future environmental change.

It’s Copperhead Season in Virginia. Here Is What You Need to Know END_OF_DOCUMENT_TOKEN_TO_BE_REPLACED

What’s Next for UVA’s Class of 2022? END_OF_DOCUMENT_TOKEN_TO_BE_REPLACED