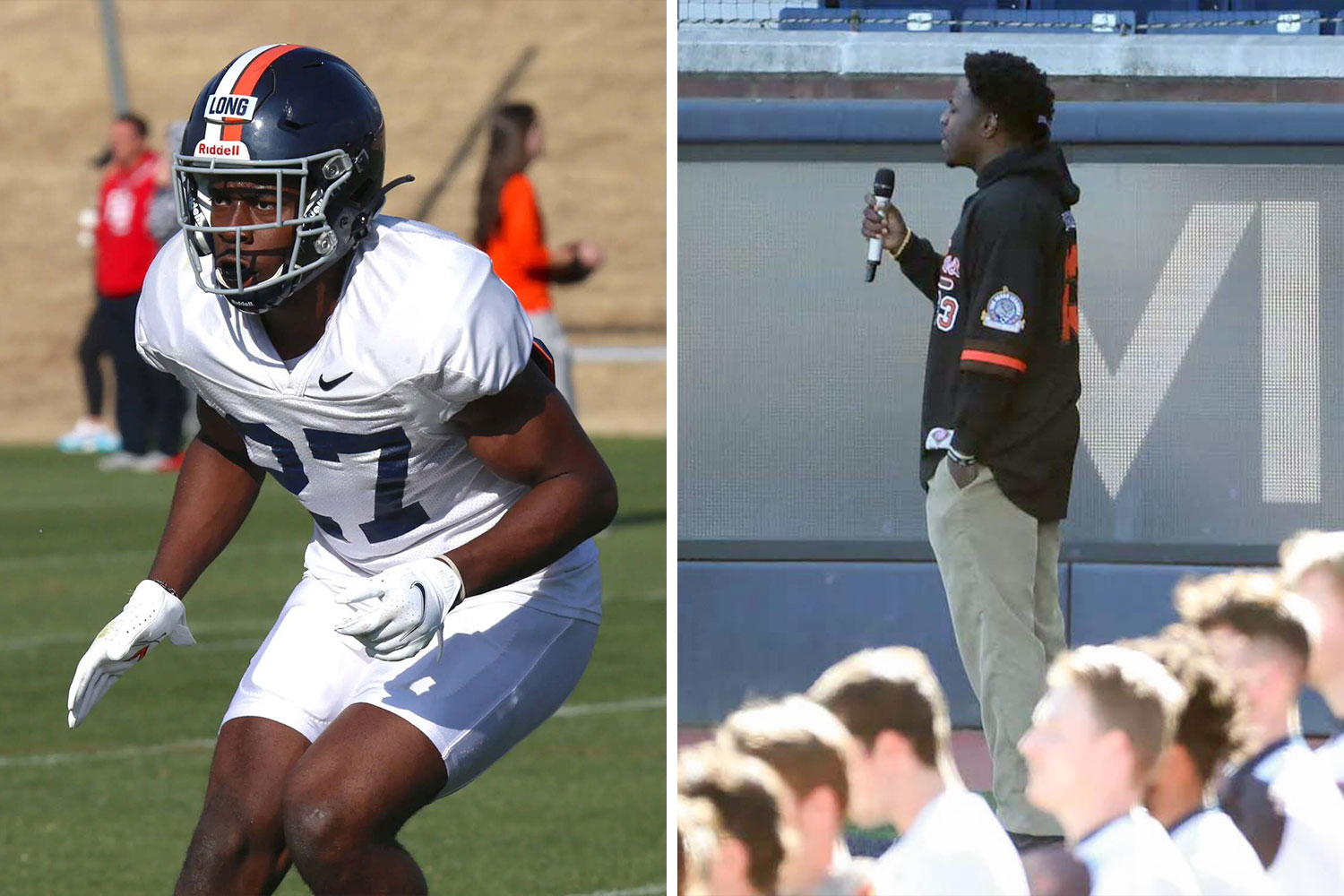 From an early age, Cavalier football player Langston Long – who sang the national anthem with the Virginia Gentlemen before a women’s basketball game at John Paul Jones Arena this past season – showed an interest in, and a talent for, musical theater. (UVA Athletics photos)

When he looked out into the audience Friday night at Old Cabell Hall, Langston Long saw some familiar faces: those of his fellow University of Virginia football players.

Long, a sophomore who spent much of his childhood in Woodbridge, has been working with the first-team defense at safety this spring. At 6-foot-2 and 215 pounds, No. 27 is hard to miss in the secondary. He stands out even more on stage with the Virginia Gentlemen, UVA’s oldest a cappella group.

“It’s a really great place for me to just be more than an athlete,” said Long, who joined the Virginia Gentlemen this semester. “I can show that in the classroom as well, but when there’s a classroom with 300 students, I’m just another student at that point. I’m trying to be a Renaissance man, multi-faceted, in every way I can be.”

Long, a tenor, sang the national anthem with the Virginia Gentlemen before a women’s basketball game at John Paul Jones Arena in February. He sang “The Star-Spangled Banner” solo before a March 4 UVA baseball game at Disharoon Park.

“It was nerve-wracking,” Long said. “I didn’t think it was the best, because there was an echo, and I wasn’t really ready for it, and I was a little nervous.”

He survived the experience, however, and followed up with a Virginia Gentlemen’s spring concert last weekend. “I really like to sing,” he said.

Long goes by “Lex,” a nickname he picked from a classmate in Texas when he was a boy. From an early age, he showed an interest in, and a talent for, musical theater.

“I got my first role in the third grade,” Long said. “I was the hare in ‘The Tortoise and the Hare.’ I stopped doing musicals like that ’til I got to fifth or sixth grade, when I was Prince Charming in ‘Cinderella.’ And then I was I was a constable in ‘Sherlock Holmes.’”

Long laughed. “’Til the day I die I’ll probably be hurt about fact that I wasn’t Sherlock Holmes. I was a different detective. And then my freshman year [of high school], I was Sebastian the Crab in ‘The Little Mermaid,’ and my sophomore year I was Uncle Fester in ‘The Addams Family.’ So musical theater has always been a part of me.”

At UVA, his football obligations would make it almost impossible for Long to devote the necessary time to a drama production, but a cappella works well with his schedule, he said. The Virginia Gentlemen practice twice a week, on Sundays and Wednesdays.

UVA cornerback Anthony Johnson can vouch for Long’s singing ability. They have adjoining lockers in the McCue Center, “so I hear him harmonizing sometimes. He’s really legit,” Johnson said.

“He’s a very fun guy. He’s a big personality guy. He can sing, he can dance, he brings a great energy. He’s just an overall well-rounded kid.”

Long’s father, Rendell Long, is a U.S. Army veteran, and for years the family moved often, with stops in Alabama, Kansas, Texas and Virginia, among other places.

“I switched schools 10 times,” said Long, who was born in Dothan, Alabama.

In Virginia, Long has lived in Arlington and Alexandria as well as in Woodbridge. He’s an extrovert by nature, he said, and that’s helped him navigate so many new environments.

“I think it was like in third grade or something, I figured out that the go-to move was, ‘Hey, my name is Lex. Nice to meet you. Can we be friends?’” Long said. “And from then on, it was really easy. I was always doing some type of something, so I was known in different areas and fields, and eventually it just kind of became very easy to make friends.”

Find the full story at VirginiaSports.com

Message from President Ryan Regarding Fatal Shooting on Grounds END_OF_DOCUMENT_TOKEN_TO_BE_REPLACED