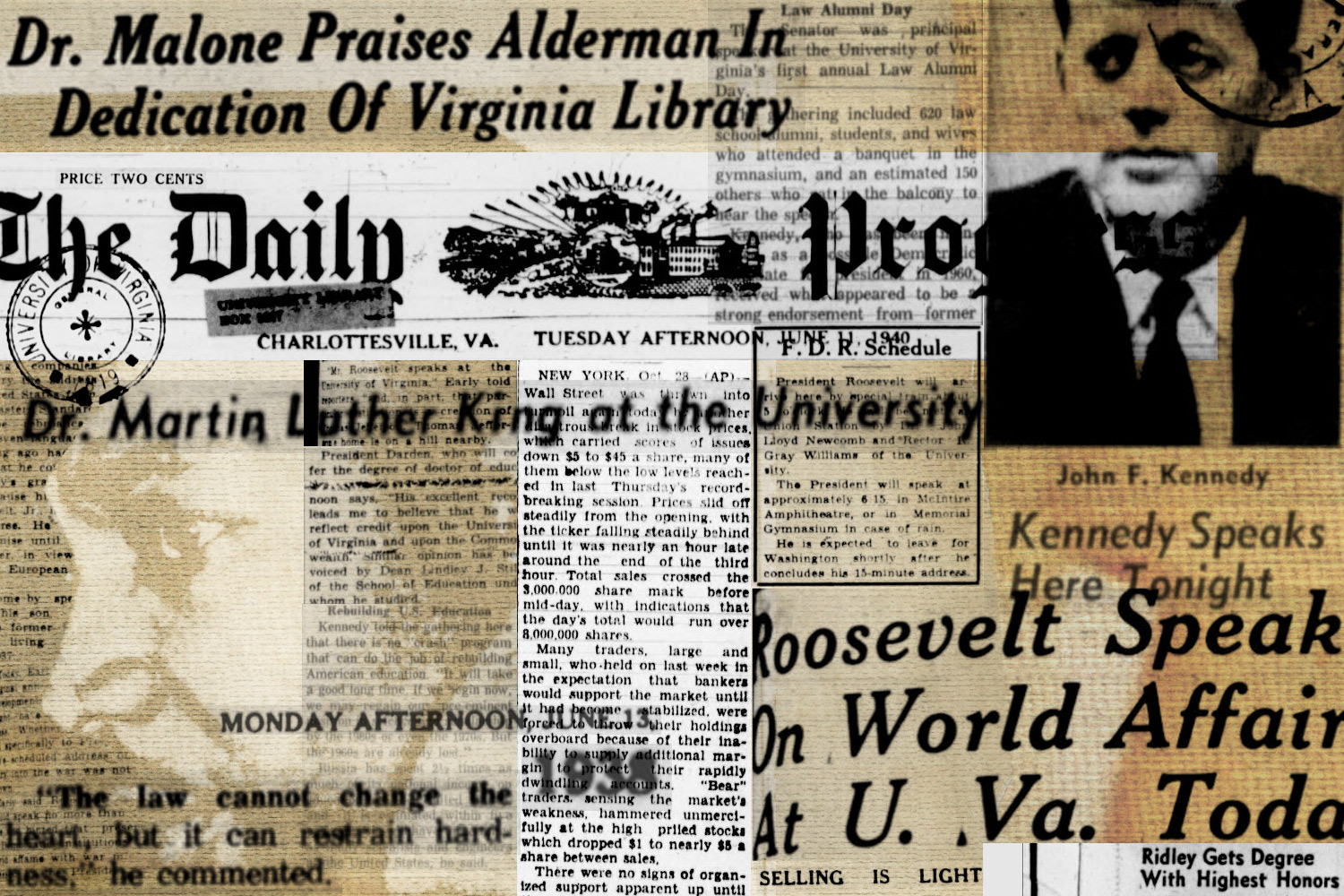 In the 40 years between the Roaring ‘20s and the Swinging ‘60s, Charlottesville and the University of Virginia hosted many seminal moments during a transformative period for the nation.

As part of its wide-ranging preservation mission, the UVA Library serves as a guardian of local history and culture. To that end, the library recently completed the second phase of a four-year joint project with the Jefferson-Madison Regional Library to digitize past editions of The Daily Progress.

“We digitized the microfilm, which is a facsimile of the print copy,” said Jennifer Huck, data librarian.

The project began in 2012 as a way to commemorate Charlottesville’s 250th anniversary and make this portion of local history more easily accessible. The first phase digitized editions from 1893 to 1923, and the second phase runs from 1923 to 1964.

“We have been scanning editions of The Daily Progress and turning them into microfilm for a long time,” said Huck. “We’re still doing it today and we also save a print copy every day and keep it in Special Collections.”

Below are just a few of the Daily Progress headlines during major national events and historic moments at the University that have been recently added to the archive. 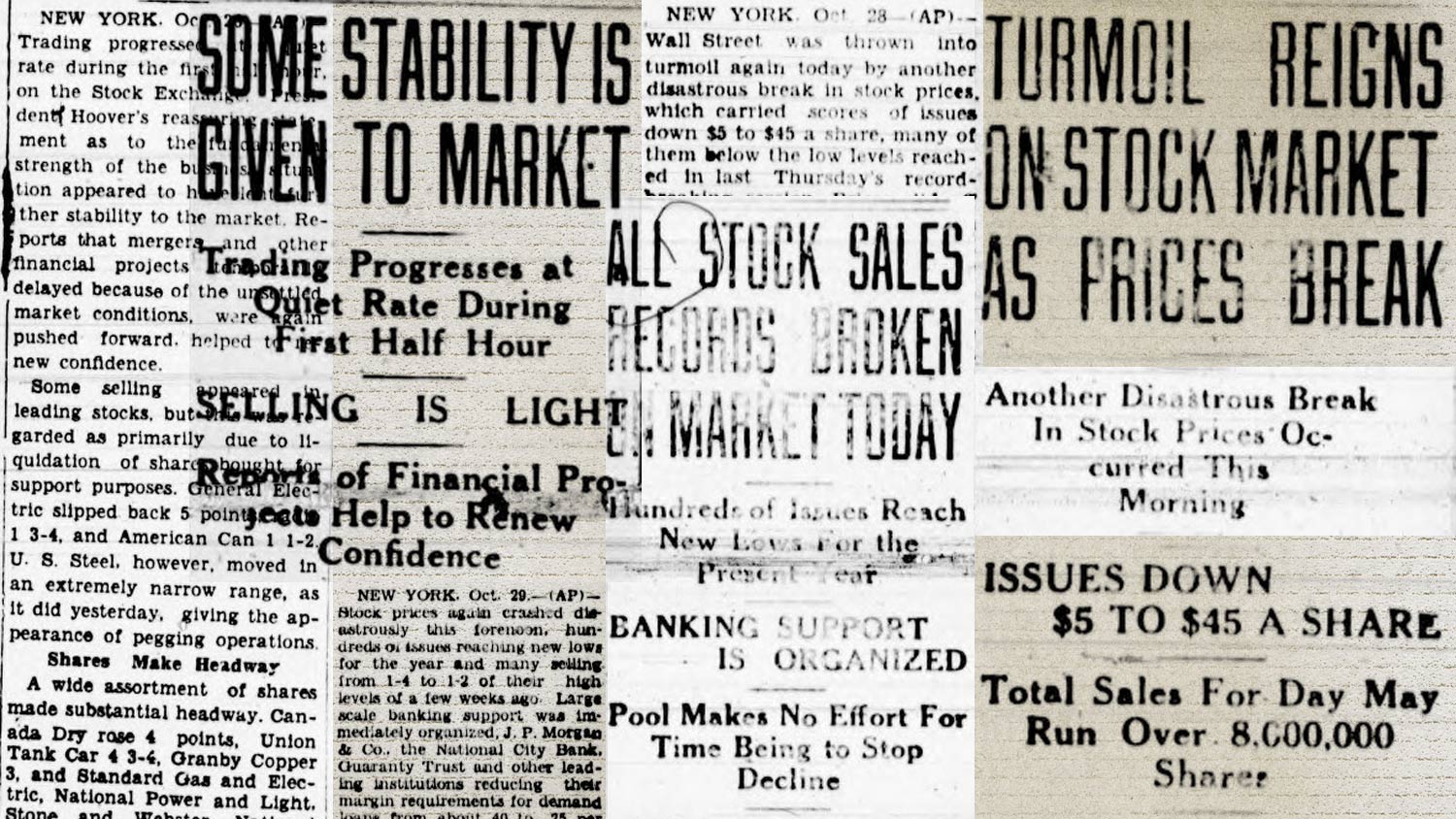 After stock prices fell dramatically on Oct. 24, 1929, the spiraling market became front-page news all around the country. In the days following that “Black Thursday,” The Daily Progress ran the national stories of the crash, but it didn’t dominate their coverage.

It was still very early for the full implications of the economic downturn to be felt in Charlottesville or on Grounds. The small columns about the financial spiral in the Oct. 26, 28, and 29 editions are treated with the same importance as the regular local crime reporting and other sensational national stories on murders and high-profile robberies. 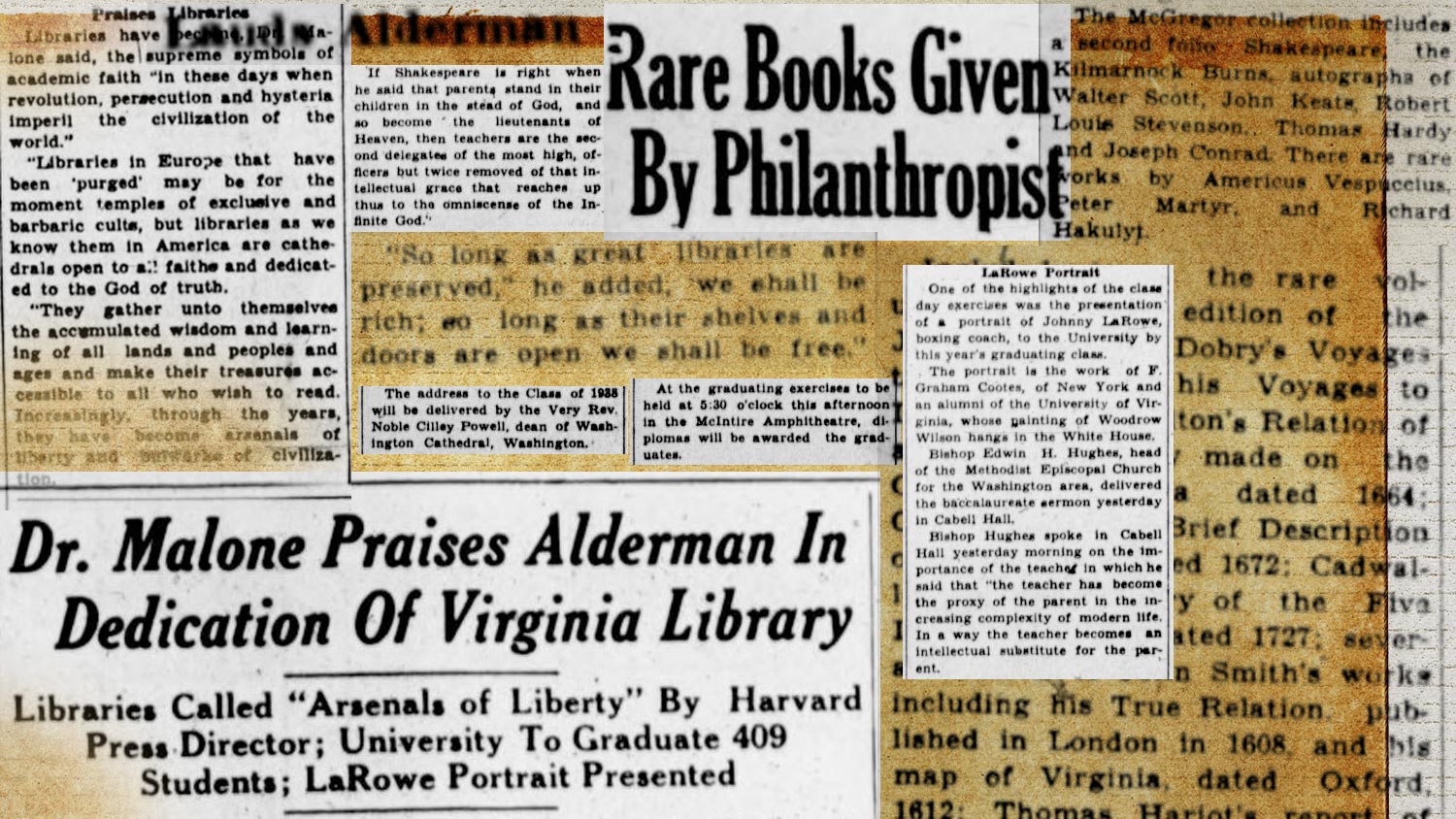 While the nation was still in the throes of the Great Depression, Charlottesville and UVA had some exciting news. At the 1938 commencement exercises in June, the University officially dedicated Alderman Library.

Dumas Malone, the director of Harvard University Press and the man chosen to write former University President Edwin A. Alderman’s biography, gave the keynote address. Malone praised Alderman for his tireless commitment to bringing a word-class library to UVA as an enduring resource for students and the public at large.

“Libraries in Europe that have been ‘purged’ may be for the moment temples of exclusive and barbaric cults, but libraries as we know them in America are cathedrals open to all faiths and dedicated to the God of truth,” declared Malone. 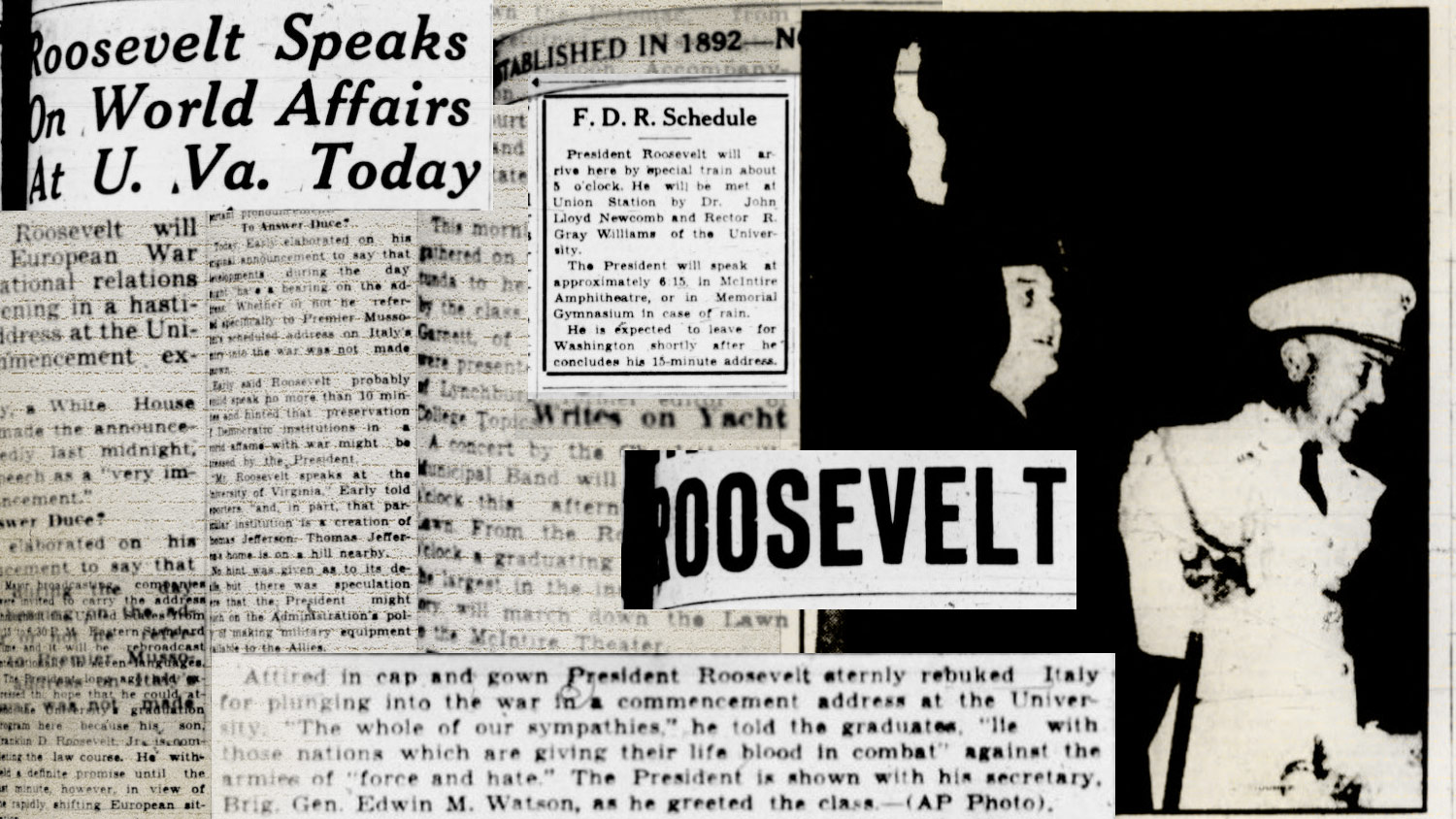 Malone’s allusion to the spread of fascism in Europe and the dangers it posed to academic life were followed two years later by even more forceful words from President Franklin D. Roosevelt.

Roosevelt delivered his famous “dagger” speech when he gave UVA’s 1940 commencement address. Referring to Italy’s recent declaration of war on France, Roosevelt said, “On this 10th day of June, 1940, the hand that held the dagger has struck it into the back of its neighbor.”

As his son Franklin Jr. sat among the law school graduates, Roosevelt made it clear that the United States would no longer remain neutral in World War II.

"In this University founded by the first great American teacher of democracy, we send forth our prayers and our hopes to those beyond the seas who are maintaining with magnificent valor their battle for freedom,” he said.

The Daily Progress reported that Roosevelt’s declarations were met with loud cheers of support from the assembled crowd. 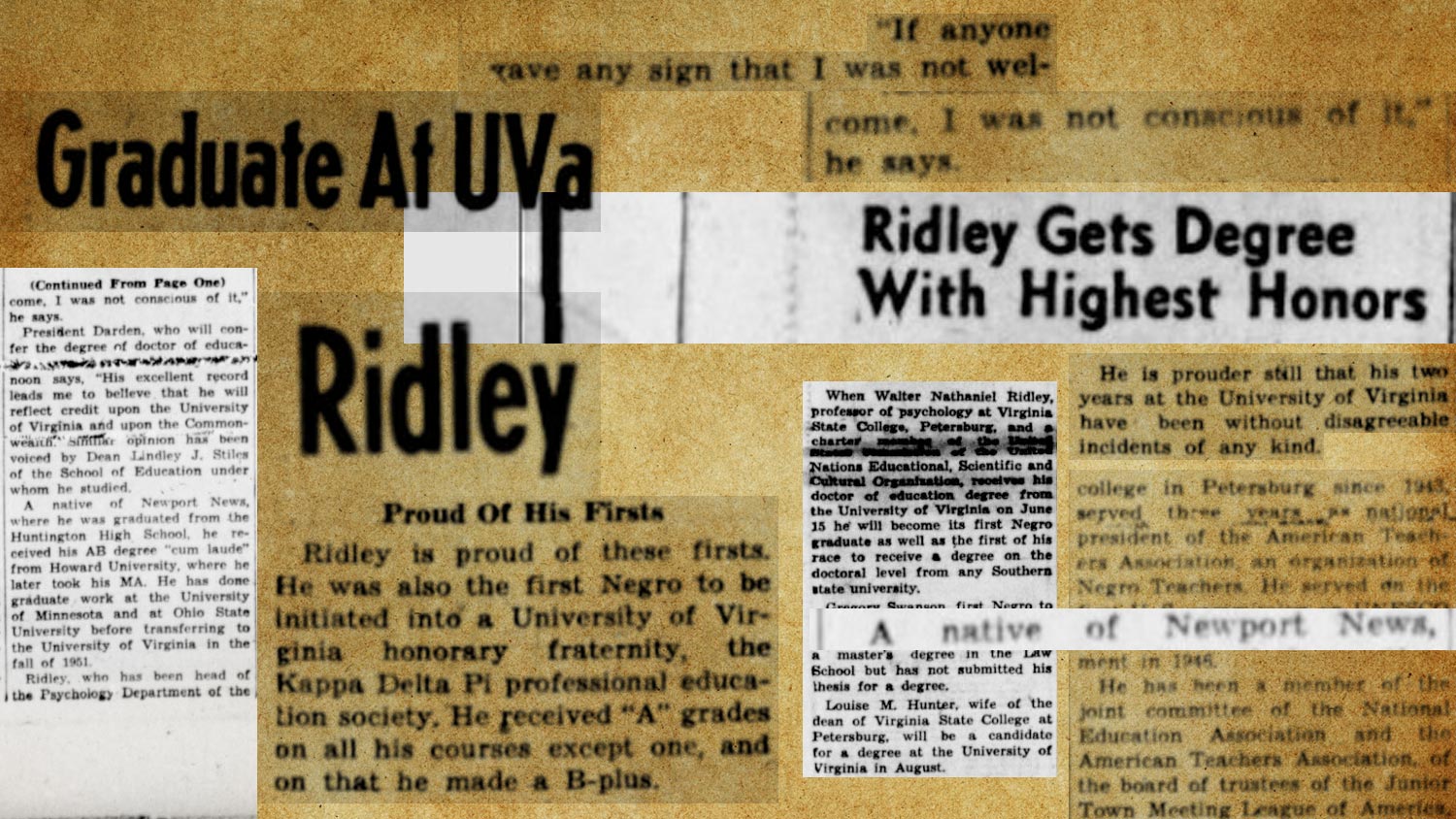 In the decade following WWII, the graduation of Walter N. Ridley marks a major milestone in the movement for racial integration at UVA and around the country. Ridley was the first African American to graduate from the University, earning his doctorate in education on June 15, 1953.

As the Progress reported, Ridley was also the first black person to receive a doctoral degree from any Southern state university.

Following graduation, Ridley went on to lead a distinguished career in education. He served as president of both the National Education Association and the American Teachers Association, and oversaw their merger in 1966. In 1987, the Walter N. Ridley Scholarship Fund was established in his honor. 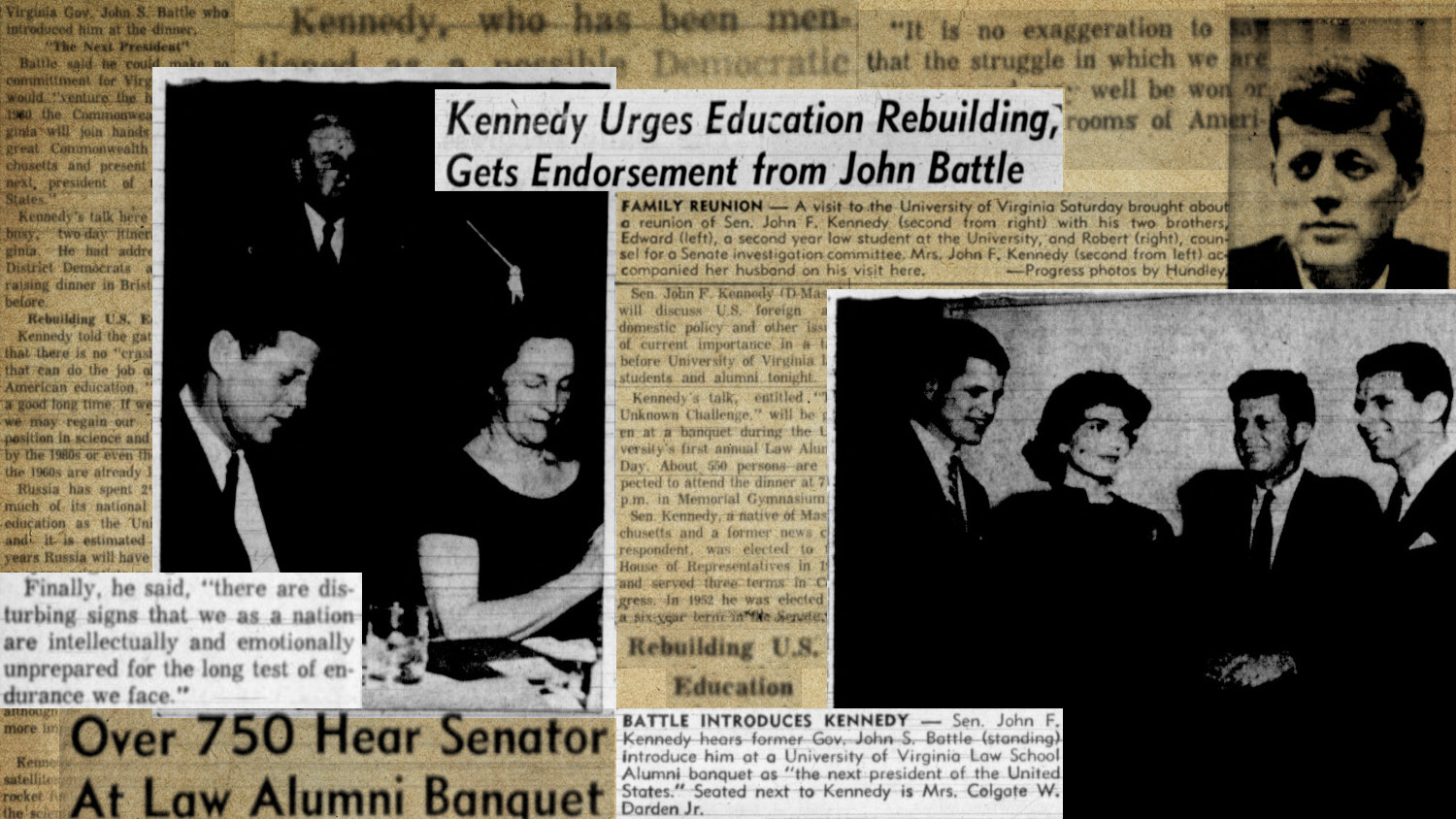 Five years after Ridley’s graduation, then Senator John F. Kennedy came to Grounds to speak on the importance of American education. There was already growing speculation that the popular senator would run for president and The Daily Progress reported on his speech with unveiled excitement.

Kennedy gave his address at the first annual Law Alumni Day on March 8, 1958. His brothers Edward, a current law student, and Robert, a 1951 alumnus, were both in attendance.

The newspaper’s classic portrait of the smiling brothers and Jacqueline Kennedy was later reprinted with sadness when they reported on President Kennedy’s assassination in 1963. 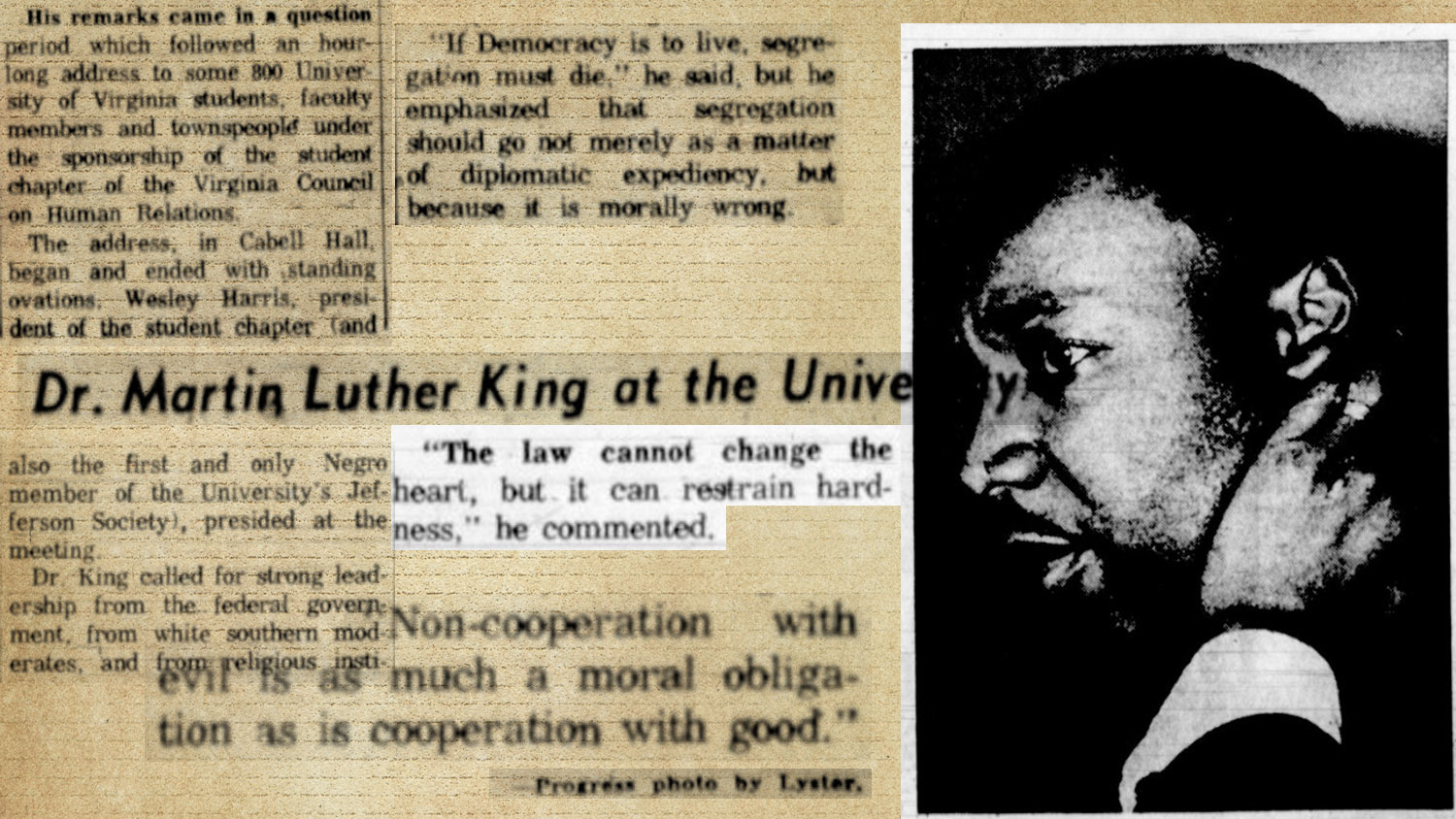 Eight months before The Daily Progress would carry the news of Kennedy’s assassination, the University welcomed another trailblazing icon of the 1960s. The Rev. Dr. Martin Luther King Jr. spoke on the cause of civil rights to about 800 students, faculty and community members assembled in Old Cabell Hall on March 25, 1963.

King was invited to speak by UVA’s student chapter of the Virginia Council on Human Relations and encouraged listeners to take an active role in politics and efforts to end segregation nationwide.

Important events like King’s visit and major national news so far dominate the searches within the Daily Progress collection, but the library staff hopes that it will also be an important resource for understanding everyday life in historic Charlottesville.

“We’re looking to a point in the future where we’d like to engage the community more aggressively to help us refine the search capabilities,” said Bradley Daigle, the library’s content and strategic expert for the Academic Preservation Trust.

What researchers call optical character recognition, or OCR, is low for the older copies of the newspaper. That means that the UVA Library’s search engine, Virgo, cannot easily recognize key searchable terms like “Civil Rights” or “Titanic” within the scans. The UVA and Jefferson-Madison Regional Libraries are hoping to change that by crowdsourcing searchable tags from users in the future.

Daigle said that the high level of traffic inside the collection is an encouraging sign that users would be interested in helping refine  searchable data.

It’s Copperhead Season in Virginia. Here Is What You Need to Know END_OF_DOCUMENT_TOKEN_TO_BE_REPLACED

What’s Next for UVA’s Class of 2022? END_OF_DOCUMENT_TOKEN_TO_BE_REPLACED