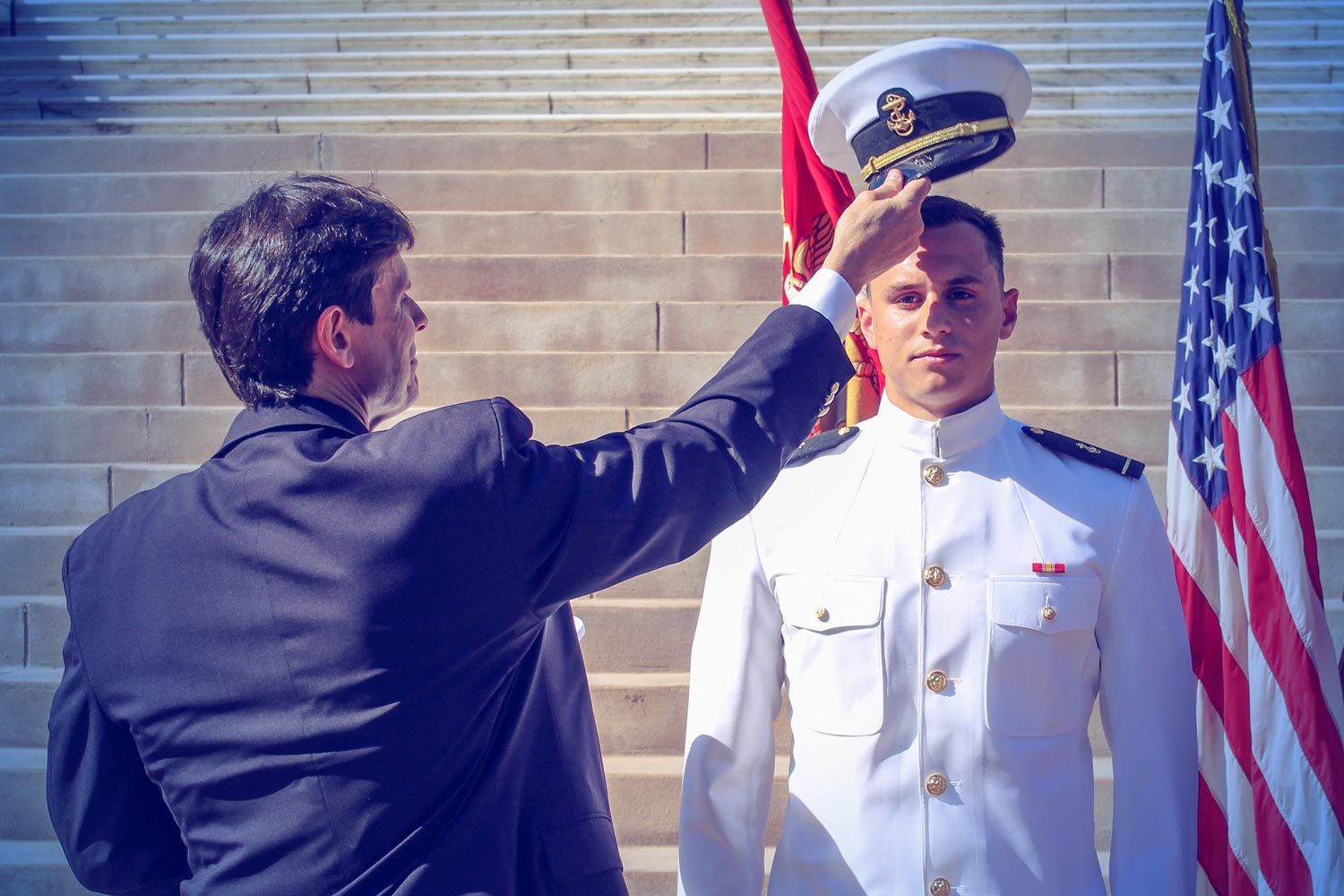 On the night before he was to compete at the Atlantic Coast Conference Outdoor Track and Field Championships in May 2016, Jeff Jernigan sat down at a table in a Tallahassee, Florida, hotel and took a final exam in astronautics.

It occurred to Jernigan, then a third-year student at the University of Virginia, that he was probably the only pole vaulter in the ACC taking on such an intellectual challenge that evening.

Not that he was complaining. Jernigan chose to follow an arduous path at UVA, one he completed with distinction. He became an All-ACC performer in the pole vault while attending the University on a Naval ROTC scholarship. On the same May weekend he graduated with a bachelor’s degree in aerospace engineering, Jernigan was commissioned as an ensign in the U.S. Navy.

“He’s a great young man,” said Bryan Fetzer, who directs Virginia’s track and field and cross country programs. “Very disciplined. It’s one of those stories that you hear about that just makes you smile.”

Jernigan, who’s from the Atlanta area, has remained on Grounds this summer, working in UVA’s Navy ROTC office. But he leaves late this month for the United States Naval Test Pilot School at Patuxent River, Maryland. 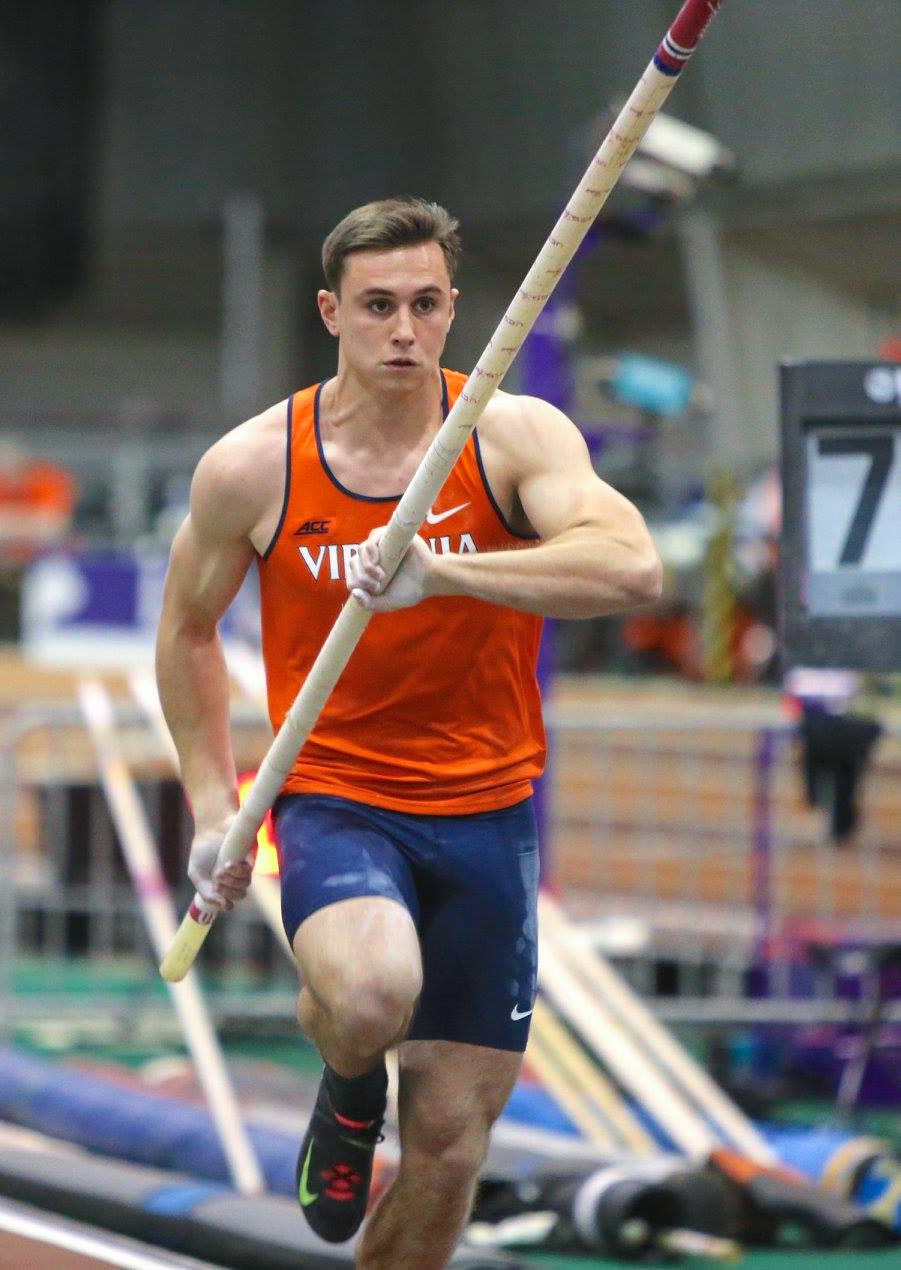 That starts for him in October, at the Naval Air Station in Pensacola, Florida.

“It’s been my goal to be a Navy pilot since I was very little,” Jernigan said. “My uncle is a Navy doctor, my granddad was a Navy doctor, and so just hearing their stories kind of inspired me to serve.

“They’ve always taught to have some part of your life as service, and that kind of rubbed off on me.”

He smiled. “And then I saw a little movie called ‘Top Gun.’”

Before enrolling at UVA, Jernigan earned his private pilot’s license. His drive to excel served him well at Virginia, where he juggled more commitments than the average student.

“My first year it was a little bit overwhelming,” Jernigan recalled. “You have college to start with, and then you have athletics, and you’ve never competed at that level. So it was definitely difficult. I feel like I got a good hang of it by the end of my time here. I learned a lot of good time management.”

Among those he impressed was Kathryn Thornton, a UVA professor who directs the aerospace engineering program. Jernigan took two courses with Thornton: “Introduction to Aerospace Engineering” as a second-year and “Astronautics” as a third-year.

“He had to be very efficient with his time,” Thornton said. “He couldn’t have done it any other way. Get the work done when it’s due, don’t mess around. Basically, have a schedule and stick to it.”

“They get their work done,” she said. “I’m always impressed at how they work their schedules. They manage to get homework turned in or make arrangements if they can’t. They’re very responsible at that, and Jeff was absolutely that.

“The hardest part is, the students have a lot of study groups together in the evenings and other times, and particularly in the first class he took with me, the intro class, we had a couple of big projects that were all work outside of class with a team. So they had to [find] times when they could get together outside of class time, which is a real challenge for somebody who’s an athlete in addition to being in ROTC, but he did it.”

Jernigan said he was the only student-athlete in the Naval ROTC program this year. His ROTC obligations included one course each semester, as well as workouts and drills periods two mornings a week.

“Which adds another degree of difficulty,” Thornton noted. Still, Jernigan persevered. He’s a self-starter who taught himself how to pole vault after watching the Beijing Olympics in 2008.

“I just kind of ran around with the pole,” he said. “I didn’t really want to do any of the other track events. I just went out there and gradually started bending it.”

At Lakeside High, Jernigan became one of the better pole vaulters in Georgia, but he wasn’t heavily recruited by Division I colleges. That didn’t deter him. After he was admitted to UVA, Jernigan e-mailed assistant coach Mario Wilson, who invited him to join the team as a walk-on.

“Those individuals typically don’t make it,” Fetzer said. “There’s not a lot of those kind of stories, especially on the elite level.”

But Jernigan steadily improved, and he left UVA with the third-best outdoor pole vault in program history: 5.15 meters (16 feet, 10.75 inches).

In 2015-16, he placed 12th at the ACC indoor meet. Two-and-a-half months later, at the ACC outdoor meet in Tallahassee, he placed ninth.

In late February, Jernigan placed seventh at the ACC indoor meet in South Bend, Indiana. In May, he finished fourth at the ACC outdoor championships in Atlanta. Two weeks later, in his final college meet, his best-ever jump of 5.15 meters earned Jernigan a tie for 19th at the NCAA East Preliminary meet in Lexington, Kentucky.

“A couple years ago, Mario actually had to convince me to put him on the travel roster [for the ACC meet],” Fetzer recalled. “I was hesitant. I’d be the first one to admit that. I think I told him ‘no’ the first two times he asked me, but Mario said, ‘He’s close.’ And to see him come from that point to now, he really became Mr. Clutch.”

As a freshman, Jernigan redshirted during the outdoor season, so he has another year of eligibility in that sport. He won’t use it, because he’s ready to start his Navy career. He admits, though, to wondering what might have been.

The breakthrough came in 2016, during the outdoor season, when he cleared 16 feet.

“I finally got it, and everything felt worth it,” Jernigan said. “I felt like I was finally a pole vaulter and deserved to be on the team.”

His Navy obligations in the summers limited Jernigan’s ability to hone his skills in the pole vault. After his first year at UVA, he spent four weeks in San Diego, and during part of that time he trained with U.S. Marines. In the summer of 2015, he took a cruise on the USS Boxer.

“I scrubbed hallways with toothbrushes and cleaned a lot of bathrooms,” Jernigan said, laughing.

Last summer, he completed a four-week mountaineering course in Alaska and also spent time in Maryland at the Strike Aircraft Test Squadron. There he met Matthew Dominick, whom NASA recently selected to join its 2017 Astronaut Candidate Class.

“That was definitely an inspiring summer,” Jernigan said.

If he didn’t achieve all his goals in track – Jernigan never qualified for the NCAA championships – he still benefited from his athletic experience at UVA.

“One of the big things was learning how to handle setbacks here,” Jernigan said. “I guess I have applied that to other areas of my life.”

He suffered a stress fracture in his ankle as a freshman. “Because of that I couldn’t run,” Jernigan said, “so I did a lot of upper-body stuff and got really good at pole vault gymnastic exercises, and that really helped me a lot later on.”

As a sophomore, he suffered another stress fracture, this one in his wrist. “But while I was hurt with my hand, I got better with my runs,” Jernigan said.

His ROTC commitments occasionally conflicted with his pole vault training, but his coaches didn’t object.

“They were really supportive,” Jernigan said. “Wilson, he made it clear, he supports the military and he’s proud of what I’m doing. Fetzer has a brother in the military, so he’s been very supportive of my commitments, too.”

The Cavaliers’ coaches will miss Jernigan, and they’re sorry to see him leave. But a new chapter of his life is about to begin.

A Year We Will Never Forget: 2019-20 in Review END_OF_DOCUMENT_TOKEN_TO_BE_REPLACED

‘What Will You Carry With You?’ Remarks From UVA President Jim Ryan END_OF_DOCUMENT_TOKEN_TO_BE_REPLACED