Soccer Has Taken Edward Opoku on a Dream Journey 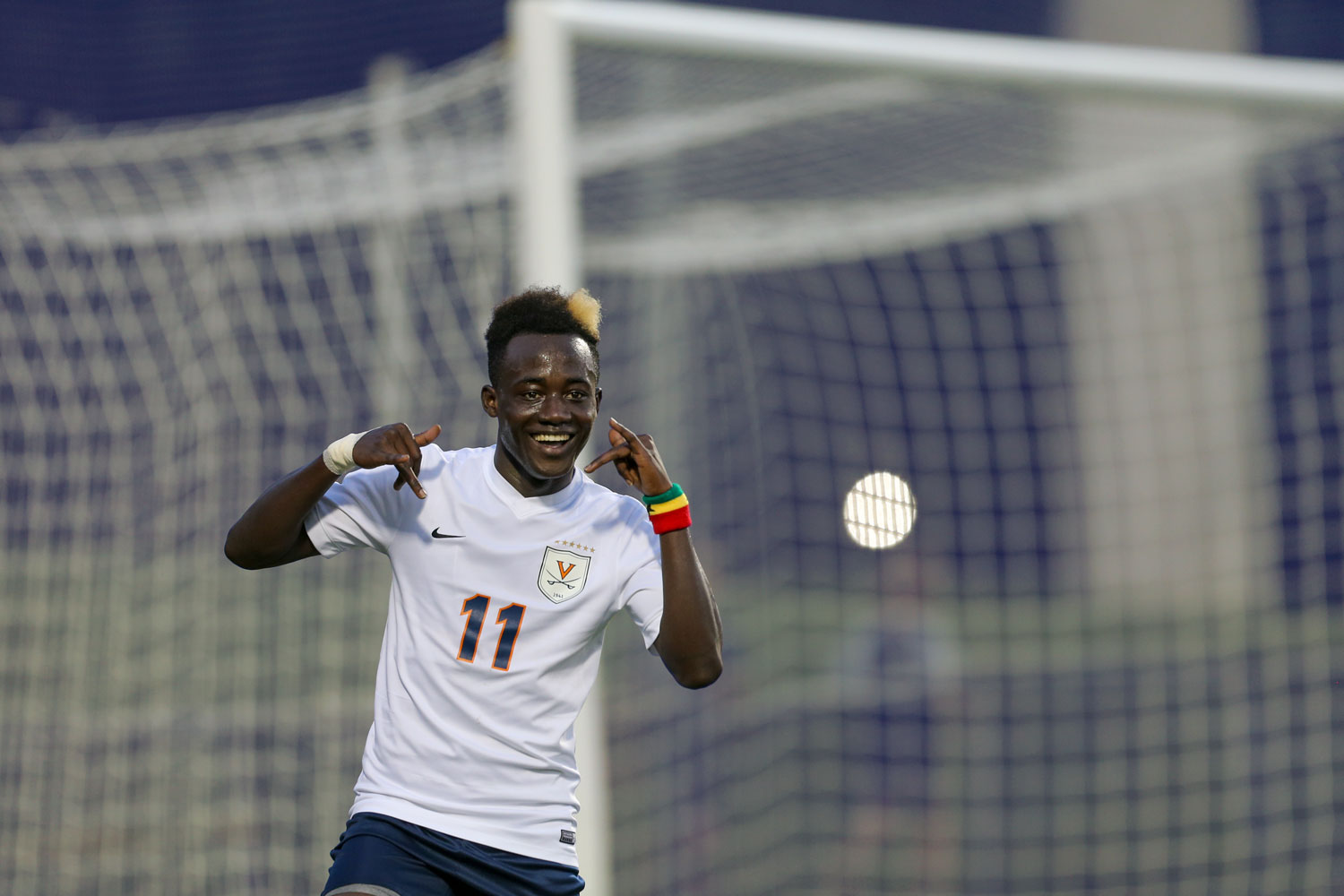 Edward Opoku loves to play soccer. That’s clear from the radiant smile he flashes on the field, the exuberance with which he competes, the joy in the runs he makes. It was torture, therefore, for the University of Virginia forward to be confined to the stands at Klöckner Stadium on a recent Tuesday evening.

Four nights earlier, in the 83rd minute of what would end as a 2-2 tie between UVA and Syracuse in Charlottesville, Opoku had been red-carded for arguing with the referee. NCAA rules mandated that he had to miss the next game as punishment and could not even watch from the sideline.

“He’s got to learn from it, and he will,” Virginia head coach George Gelnovatch said of Opoku, who led the 10th-ranked Wahoos with seven goals and three assists through their first 14 matches.

“He’s a competitive, competitive guy. He’s just got to make sure he channels it the right way.”

In his first game back from suspension, Opoku scored twice in UVA’s 2-1 win over Virginia Tech in Blacksburg.

When UVA hosted Marquette on Sept. 12, however, he had no choice but to be a spectator.

In the stands, Opoku couldn’t sit still. And when his friend Raheem Taylor-Parkes, a sophomore forward, scored his first goal as a Cavalier, Opoku couldn’t contain himself.

“I actually jumped down [out of the stands] and went to celebrate with my teammates,” he said, laughing.

That’s not out of character for Opoku, who is 20. He remains upbeat even in the face of adversity. 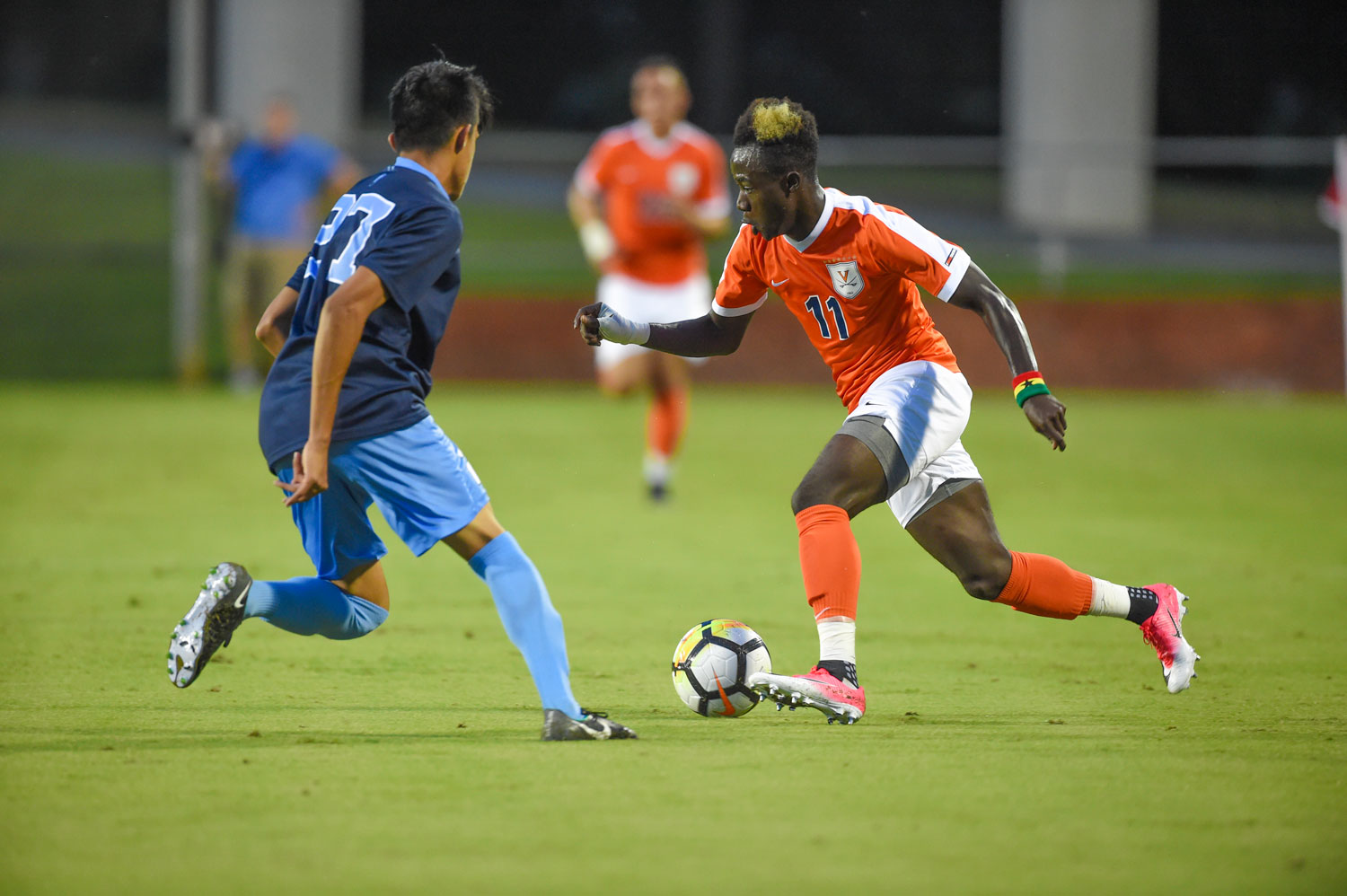 “I guess it’s an African thing, I don’t know,” said his friend Mamadi Diakite, who plays for the UVA men’s basketball team. “We’re happy. Live life. You only live it once, so just enjoy your time. Smile. Have fun. But at the same time, do what you need to do on the side.”

Diakite, who stands 6-foot-9, is from Guinea. Opoku, 14 inches shorter at 5-7, is from another nation in West Africa, Ghana. Each is in his third year at the University, and they’ve been close since they lived in the same dorm in 2015-16.

“He’s pretty much always in my apartment on the weekends,” said Opoku, who cheers for Diakite during basketball games at John Paul Jones Arena. “He’ll sleep on the couch, since he can’t really fit in a bed.”

Opoku’s support system is vast. He grew up in extreme poverty in his village in Konongo Odumasi, playing soccer without shoes or cleats.

“Everything you’ve seen Edward do with the ball, he learned in his bare feet,” said Rick McWilliams, who coached Opoku at Millbrook School in New York.

Who knows where Opoku might be had he not, at the age of 10, been selected for the Right to Dream Academy after a successful tryout? In that program, promising young African soccer players attend boarding school, after which they sign professional contracts or, in some cases, are awarded scholarships to private high schools in the United States.

“They’ll get them when they’re 9 or 10 years old,” McWiliams said, “and the criteria is, you’ve got to be a really good soccer player, you’ve got to follow the rules and go to school, so that you can get an education, and you’ve got to be of strong character and a good kid.”

Opoku attended the Right to Dream Academy near Accra, the capital of Ghana, and then was offered a spot at Millbrook, a coed boarding school about 90 miles north of Manhattan. He enrolled at Millbrook as a ninth-grader in the fall of 2011.

The Right to Dream program was “a turning point in my life,” Opoku said. “I went from eating once a day to eating three times a day and actually having soccer gear and having to learn English and study. I never had any of that. It absolutely changed my life. It taught me so well, and I think being at Right to Dream is what made me the person I am today, because even though I graduated from there, up to now I still carry their values and make sure I’m representing not just family or my school here, but also my family at Right to Dream, because I want to create the opportunity and have more Right to Dream students [in the U.S.].”

Right to Dream alumni are a growing force in Division I men’s soccer, with players at such schools as Michigan, Fordham, Villanova, Boston College and Virginia.

“We’re all like a family,” Opoku said. “We have the same group chat.”

At Millbrook, Opoku starred in soccer from the start, and he finished his prep career with a school-record 85 goals. He faced a tougher transition off the field. He remembers staying in New York City with Millbrook classmate Jeremy Tenenbaum, whose family had an apartment on the Upper East Side.

“I came from Ghana, my little village where the tallest building was probably my height,” Opoku said. “Then I go to New York City, and it’s completely shocking and life-changing.”

Opoku had to adjust in the classroom, too. “It took a lot of discussions for him to understand that education wasn’t just memorization,” McWilliams said, “that to understand the process really made a big difference. And he’d spent his whole life using his charm and his guiles to survive.

“He’s very smart. He just never had a chance to have an education.”

The McWilliamses weren’t the only Millbrook residents to look out for Opoku. He considers Christina Lang, whose son Robert attended Millbrook with Opoku, a second mother.

“Before I met her, I was kind of floating around,” Opoku said. “I didn’t have an actual home, because Millbrook is a boarding school. So during the holidays, I would ask my friends if I could stay with them, or my adviser would kind of put me out there and say, ‘Can Edward come stay with you for the break?’”

When she learned of his plight, Christina Lang invited him into her family’s home, and since then “they’ve cared for me as their own,” Opoku said. “I call her Mom; she calls me son. I try to call her on a regular basis, as I call my actual mom at home [in Ghana]. When my mom at home calls me, she asks me how my mom here is doing. I love them both. They both have done tremendous things for me.”

Opoku attracted considerable interest from elite college programs and at one point appeared headed to the University of North Carolina-Chapel Hill.

“But then I came to UVA the day after Christmas [in 2014] to visit, and I absolutely loved this place, even though it was cold and there were no students here,” he recalled.

That there was virtually no one on Grounds didn’t faze Opoku, who bonded immediately with associate head coach Terry Boss. Opoku decided to become a Cavalier.

“I think it was the best decision that I’ve probably made in my life,” he said.

He started 15 of Virginia’s 18 games as a freshman in 2015. Despite developing a sports hernia that would require surgery after the season, Opoku had two goals and three assists and made the ACC’s all-freshman team. But he struggled to adjust to a defensive-oriented system that didn’t play to his strengths, and Opoku and his teammates often seemed out of sync with each other.

“I was very frustrated, each and every game, because I wasn’t able to play to my game or my ability,” Opoku recalled.

His sophomore season went better, even though an ankle injury hindered Opoku. With 14 points (six goals and two assists), he was second on the team behind midfielder Pablo Aguilar (16 points). Opoku, a second-team All-American, regularly bedeviled opponents with his pace and quickness and improvisational skills.

This summer, Opoku trained with three Major League Soccer teams: the Seattle Sounders, the Columbus Crew and D.C. United. He carried the confidence gained from those experiences – an awestruck Opoku met one of his soccer heroes, Clint Dempsey, in Seattle – into his third college season. Moreover, he embraced a directive from Gelnovatch.

“When I talked to him, he said, ‘When you play, just let the game come to you. Be predictable to your team and unpredictable to the other team,’” Opoku said.

That message is posted on the wall in his room, where Opoku sees it every day when he wakes up.

“I think that’s one thing that’s helped me this year, and also allowing myself to ease into the game,” Opoku said. “I always used to think that being an impactful player is always about having to touch the ball or to do a skill or do some cool stuff.”

“They’re like, ‘You don’t have to touch the ball, because you’re a very dangerous player that teams are going to focus on. Sometimes you can make a run, and it will create so much space for someone else to go, and that’s what top players do,’” Opoku said.

Gelnovatch said: “His whole life he’s been pulling off things, scoring goals and achieving on an individual level, just through sheer pace, athleticism and ability to dribble, and he just moved through the ranks, whether it’s the Right to Dream Academy or his private school.

“Part of what makes him really dangerous is having some of that quality. But the thing he’s developed, in his two, three years here, is playing in a system, understanding positioning and understanding tactics.

“He still can run behind you and score and do all those things, but he’s now doing it within the system. And that’s the way to the next level. I don’t care who you are, you’re not going to be able to dribble through the whole team.”

Opoku’s attitude has never been an issue, Gelnovatch said. “It’s just who he is. After the game [in which Okopu received a red card], I texted him that night and said, ‘Look, don’t dwell on it, don’t stress about it. Learn from it. You’re doing great. Everything’s going to be fine.’

“And right away he responded: ‘Sorry, Coach. I’ll learn from it.’ Whenever something like that happens, he responds very, very well.”

A media studies major, Opoku lives with teammates Daniel Barir, Simeon Okoro and Prosper Figbe, who transferred to UVA from South Florida this year. Like the rest of the team, Opoku was shaken by the Unite the Right rally that ended with the tragic loss of three lives last month.

“This place is like a home to me,” Opoku said. “The people of Charlottesville have shown me so much love, whether I’m on Grounds or downtown. So having to experience what happened in Charlottesville, it was strange to me. I was just like, ‘This is not the Charlottesville I know.’”

He didn’t stay quiet. During a team meeting, Opoku assured the Cavaliers’ newcomers that they could feel safe at the University.

“He was fantastic,” Gelnovatch said.

Opoku calls himself a “massive fan” of the #HoosTogether social media hashtag used by UVA coaches and student-athletes on Twitter.

“We know Charlottesville,” he said, “and with our help and everyone being together, we’ll be able to show the outside world, people that saw [the violence] on TV, that that’s not what UVA is about or Charlottesville is about.”

Since leaving for the Right to Dream Academy, Opoku has been back to Ghana only a couple of times. He has six siblings – two others are deceased, he said – and their mother, Regina Nkansah, has never seen him play soccer in person.

“She’s only seen me on maybe a little YouTube highlight that someone would show her after the game,” Opoku said.

His mother has never been to the United States, never seen the life he’s built here. Opoku prays that will change.

“I’ve been trying, and hopefully I’ll be able to get her to come here and see me play one day,” he said.

A Year We Will Never Forget: 2019-20 in Review END_OF_DOCUMENT_TOKEN_TO_BE_REPLACED

‘What Will You Carry With You?’ Remarks From UVA President Jim Ryan END_OF_DOCUMENT_TOKEN_TO_BE_REPLACED