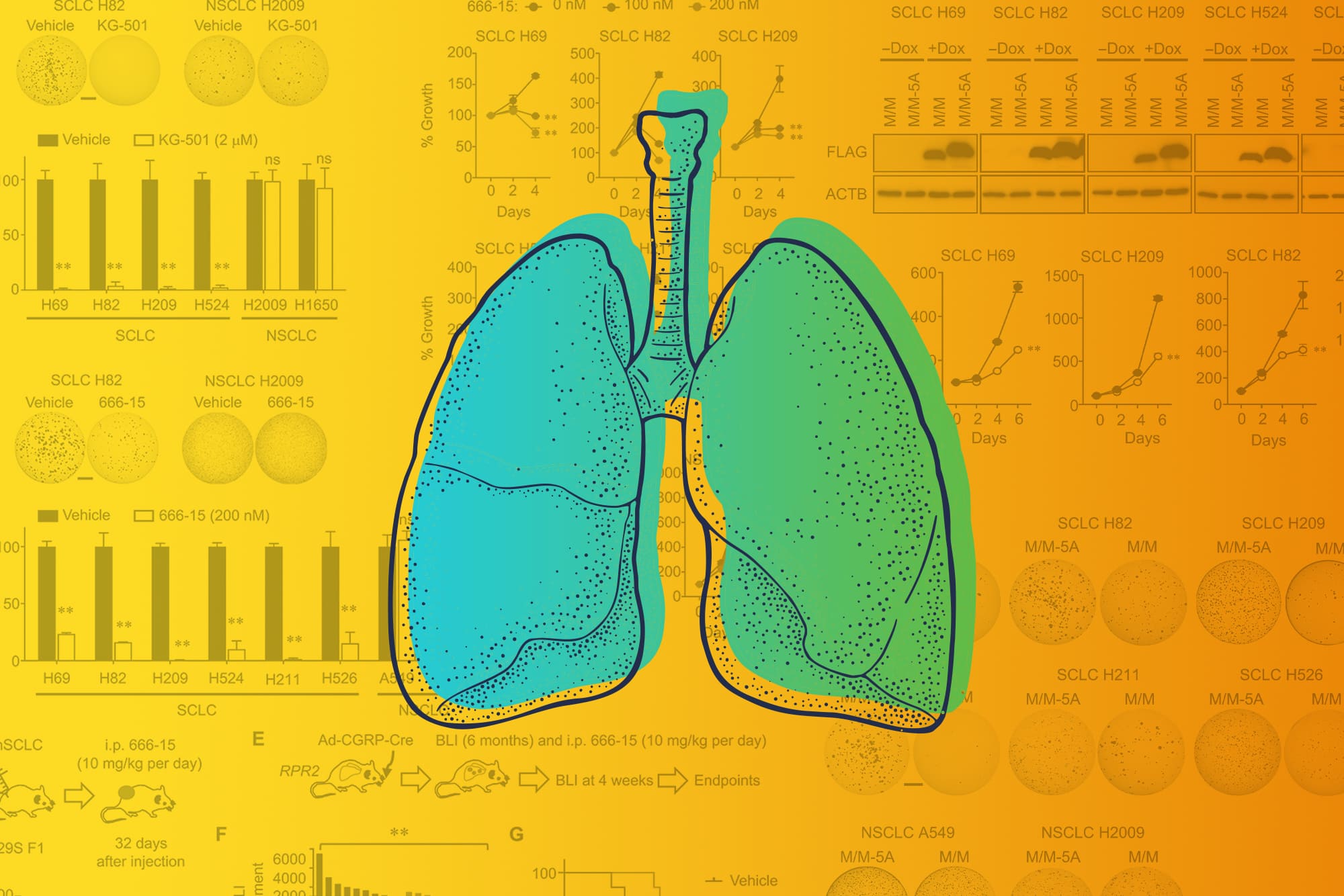 An unexpected discovery at University of Virginia Cancer Center has allowed scientists to halt the development of small-cell lung cancer in lab mice, and the surprise finding could open the door to a new treatment approach in people.

The researchers, led by UVA’s Kwon-Sik Park and John H. Bushweller, were seeking to understand the role of a mutation in the EP300 gene in the formation of small-cell lung cancer tumors. Their experiments revealed that the gene makes a protein with surprising properties that can both foster or prevent the development of small-cell lung cancer. By preventing the gene from acting as a tumor-promoter, the researchers were able to stop the cancer from forming and spreading. This held true in both cell samples and lab mice.

The protein’s essential role in tumor formation makes it an enticing target for researchers seeking to development new treatments for small-cell lung cancer, an exceptionally dangerous form of cancer. Overall five-year survival for patients diagnosed with the disease is only about 7%.

“The most remarkable aspect of our findings is that we explained the unique vulnerability of EP300 at the molecular level, down to a single amino acid,” said Park, of the School of Medicine’s Department of Microbiology, Immunology and Cancer Biology. “Given the frequent EP300 mutations found in a wide range of cancer types, I hope that the concept of targeting the EP300 KIX domain will have a more general applicability for cancer therapy.”

Small-cell lung cancer is responsible for approximately 13% of lung cancer diagnoses. Patients typically have better outcomes when it is caught early, before it has spread outside the lung, but it is a fast-growing cancer and is often discovered after it has already spread. Smoking is a major risk factor. Current treatment options include surgery, chemotherapy, radiation and immunotherapy, but, for most patients, treatments do not cure the cancer. That means better options are urgently needed.

UVA’s new findings point to a potential new approach. Park and his team made their surprise discovery while investigating the role of the EP300 gene in the development of small-cell lung cancer using genetically engineered mouse models. Remarkably, they found the protein the gene makes could both promote and suppress tumor formation. One component, or “domain,” of the protein appeared to foster cancer development, while another appeared to impede it.

The scientists further investigated the tumor-promoting domain, called KIX, and found it was essential for small-cell lung cancer development. The cancer couldn’t exist without it. The cancer, it turned out, had to get its KIX.

“Based on this data, we are quite excited to pursue the development of a drug targeting the KIX domain, as this will likely have multiple applications for cancer treatment, particularly for small-cell lung cancer and leukemia,” Bushweller, of UVA’s Department of Molecular Physiology and Biological Physics, said.

The researchers were pleased that their collaboration has produced such a promising lead in the effort to develop better therapies for small-cell lung cancer.

“This study was one of the best examples for the interdisciplinary collaborations happening at UVA, spearheaded by talented and hardworking postdocs Kee-Beom Kim and Asish Kabra,” Park noted.

Shedding light on the causes of cancer and pioneering better ways to treat it are urgent missions of the UVA Cancer Center, which on Feb. 1 became one of only 52 cancer centers in the country to be designated as a Comprehensive Cancer Center by the National Cancer Institute. The designation recognizes elite cancer centers with the most outstanding cancer programs in the nation. Comprehensive Cancer Centers must meet rigorous standards for innovative research and leading-edge clinical trials.

What’s Next for UVA’s Class of 2022? END_OF_DOCUMENT_TOKEN_TO_BE_REPLACED