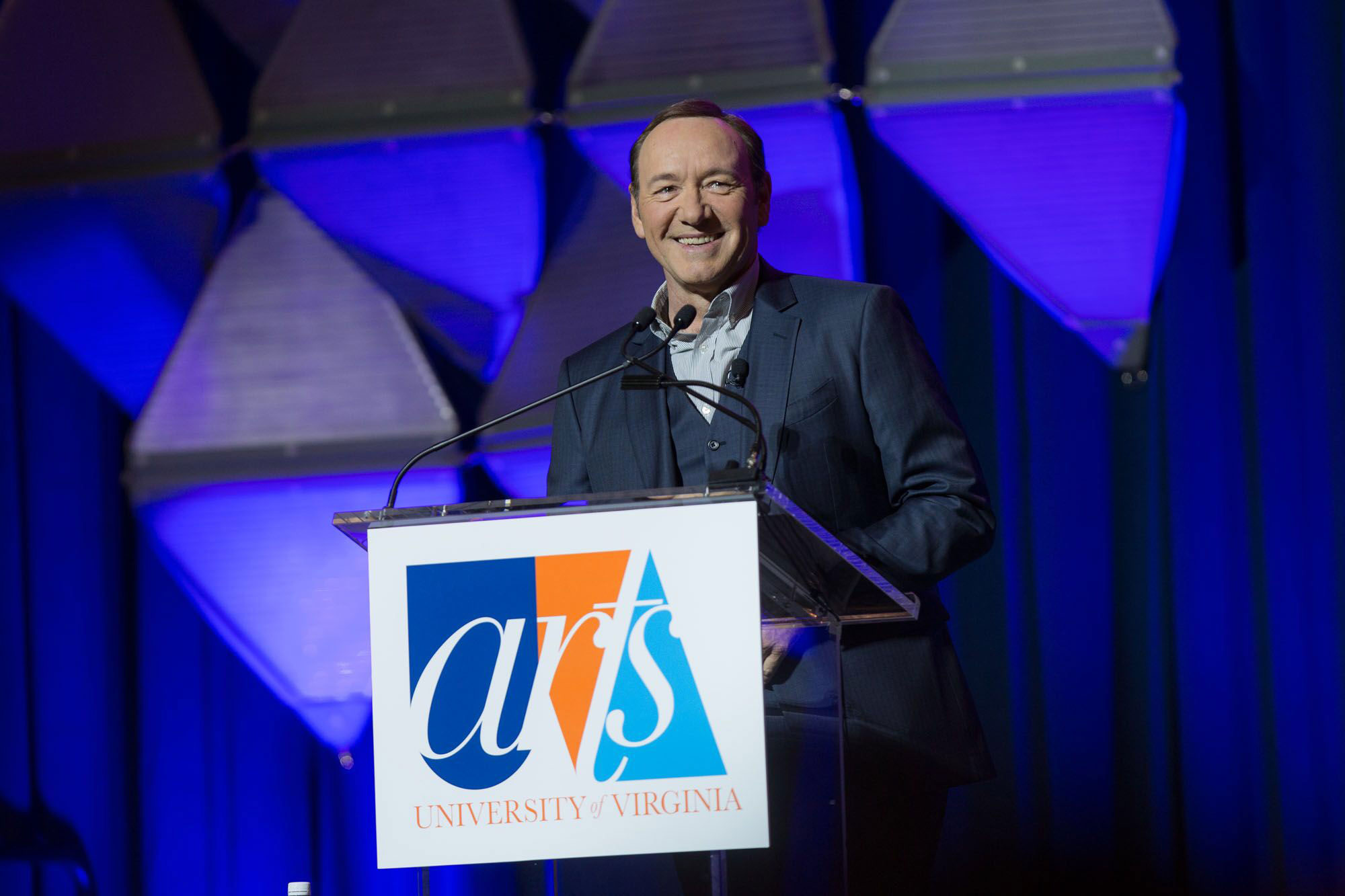 Despite jokingly claiming that he was the third-choice speaker for this year’s installment of the President’s Speaker Series for the Arts at the University of Virginia – after the Charlottesville-based Dave Mathews Band and basketball superstar Joe Harris – Kevin Spacey captured a John Paul Jones Arena audience of about 9,000 people with stories of his career, life advice for students and impressions of celebrities.

The award-winning American film and stage actor, director, screenwriter and producer was the second annual speaker in the series, which is supported by the offices of the President and the Executive Vice President and Provost, the Vice Provost for the Arts and The Joseph & Robert Cornell Memorial Foundation. U.Va. alumna Tina Fey gave last year’s inaugural address.

Spacey connected with students with references to U.Va. pastimes. He even joined in on traditions, high-fiving Dean of Students Allen Groves, offering to streak the Lawn with U.Va. President Teresa A. Sullivan and highlighting his knowledge of the Corner.

The speech was intended to highlight the importance of the arts; Spacey chose to do so through what he called “Frank Underwood’s Guide to Surviving College.” Underwood is the character he plays in the Netflix series, “House of Cards.”

The first: “Success is a mixture of preparation and luck.”

“This is a time when we’re all students and we’re not sure what we want to do,” said Laura Elliott, a fourth-year student majoring in economics and drama. “I think his ability to speak to taking risk and following your passion is something everyone can relate to.”

Spacey advised the audience, “Don’t be afraid to shake things up. No one ever breaks new ground by playing it safe. In the end it’s the risk-takers who are rewarded.”

For fourth-year student Sarah Hill, who has found academic homes in the School of Engineering and Applied Sciences and the McIntire Department of Art, the speech affirmed that taking risks provides the opportunity for both success and happiness. “Some of the experiences I have are very different from typical engineers. [The arts] is something that I’m passionate about, but trying to relate it back [to engineering]. Spacey made it clear that it’s more rewarding to do that.”

Underwood’s guide also included tips on the importance of generosity, networking and ambition.

Spacey joked that he could keep the audience engaged with juicy Hollywood gossip or his next big Broadway production, but instead kept the audience laughing with spot-on impressions of Bill Clinton, Johnny Carson and his infamous character, Underwood.

Later, during a question-and-answer segment with U.Va. Vice Provost for the Arts Jody Kielbasa, Spacey shared the story of how he mastered impressions.

“I discovered when I was really young that if I could do impressions, I could make my mom laugh,” Spacey said. “Her laugh was the greatest sound I ever heard. That’s how it all started.”

The Speaker Series highlights the array of arts that the University offers. “U.Va. stands on the front lines of this effort [of commitment to the arts,] ” Spacey said.

“The University’s arts curriculum inspires creativity, innovation and discovery, while giving our students across all disciplines opportunities to integrate the arts into their U.Va. experience,” Sullivan said.

Spacey agreed that arts can be a valuable addition to any curriculum.

“We have this system that we call STEM, to teach sciences and technologies. Now there are a lot of schools who are adding an ‘A’ and calling it ‘STEAM.’ ‘A’ is for arts,” Spacey said. “I think it’s incredibly important because while math, science and technology are hugely important, if we leave behind a young person’s imagination or creativity, I think they won’t have as full a life,” he said.

“Donations to the arts endowment will build a sustainable means of funding for new and signature programs and initiatives,” Kielbasa said. “We look forward to building this endowment over time and sharing its impact and efforts to further enhance U.Va’s profile as a leader in creativity, learning, teaching and service in our community of Charlottesville, the commonwealth and beyond.”

The evening began with a variety of student performances, including one by the University Singers, the McIntire Department of Music's flagship chorus.

It was first anticipated that 5,000 people would attend Spacey’s speech,; in the end, about 12,000 tickets were distributed, and the crowd was estimated at about 9,000. Spacey wrote in a pre-event Twitter post, “If I have an impact on just 1 student in the arts at tonight’s UVA event, it will be worth it. 12,500 will be there. I like those odds @UVA.”

His chances of reaching just one were great with an audience of students, faculty members and community members. “I expect the audience is 50-50,” fourth-year student Victoria Tran said. “Half the people want to see him because he’s Kevin Spacey from ‘House of Cards,’ and the other people want to take away those stories and lessons he tells of how he came up and he struggled to become an actor.”

Elliott, the economics and drama student, said she was lured by both Spacey’s fame and his experience. “I’m excited to hear him as Kevin Spacey, but I’m also excited to hear all he’s done with the arts. He hasn’t just acted – he’s produced, he’s an artistic director, he’s grown up in the hierarchy but maintained his creative freedom.”

Ending his speech in character, Spacey left students with a final piece of advice from “House of Cards”: “For those of you climbing to the top of the food chain, there can be no mercy. There is but one rule: hunt or be hunted.”

In Memoriam: Life of Drama Professor To Be Honored Sunday END_OF_DOCUMENT_TOKEN_TO_BE_REPLACED