Stacks of Smiles and Pancakes Served at Staff Appreciation Breakfast 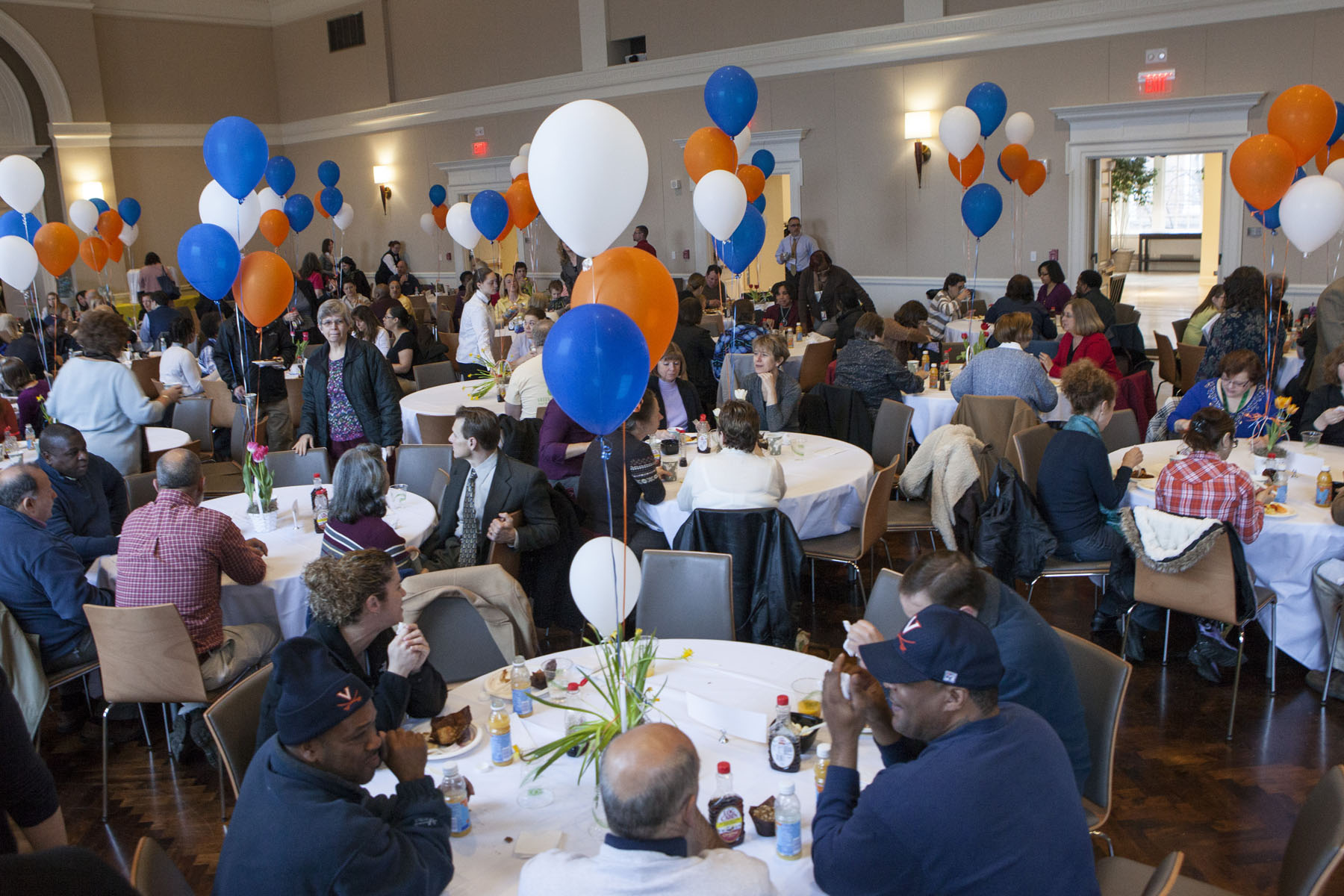 At University Human Resources’ second annual Staff Appreciation Pancake Breakfast, held Tuesday, the atmosphere in Newcomb Hall Ballroom was festive, with bouquets of orange and blue balloons, as well as flowers, accenting the joys of giving and receiving.

“We were served with a smile,” said Jennifer Huebner, who car-pooled with David Bowes and Chris Hubert, development researchers in the University Advancement Office.

“It was a great way to start the day,” Bowes said.

At another table, Karen Rush-Clark and Javanov Barksdale, from the pathology department, and George Minor, from Medical Center Human Resources, agreed the food was tasty and hot, and the service was wonderful. Their server, Trish Cluff, associate vice president of Health System Marketing and Strategic Relations, was a familiar face to them.

Carl Briggs, a proofreader with Documents Compass, said the event felt “so festive and welcoming.”

“It was a beautiful setting ... more intimate,” said Dean of Admission Greg Roberts, who also served last year when the event was held in the John Paul Jones Arena.

Dave Hudson, associate vice president for research, also worked a serving shift and said it was a lot of fun. It made the joy of giving real, because it was immediate and face-to-face, he said.

Another server, Michele Hereford, chief of the Health System’s Transitional Care Hospital, said she was thoroughly enjoying watching the employees’ smiles as they came through the line.

Several employees arrived before the 6:30 opening, and the crowds arrived by 7 a.m., Human Resources event planner Elizabeth Carey said. There was a steady flow for the next two hours, until the event wrapped up at 9:30 a.m. U.Va. Dining Service Catering estimated up to 1,800 employees came for breakfast. More than two dozen administrators did the serving.

Susan Carkeek, vice president and chief human resources officer – who also dished out pancakes – was pleased with the turnout, she said.

“It’s a small gesture of appreciation for what employees do all year,” she said, adding it was great to see the camaraderie among them.

With four buffet tables and lines on either side, no one had to wait for long to get breakfast. Staff members filled their plates with fruit, muffins and bacon before getting served pancakes. Gluten-free flapjacks also were available.

Morning-themed songs, such as “Wake Up, Little Susie,” and “Here Comes the Sun,” played over speakers as staff members from all corners of the University sat with coworkers they knew well and others they just met.

John Evans, director of accommodations in the housing division, said he enjoyed seeing staff members he knew from other departments and hadn’t seen in years. He and Ashley Herndon liked being able to walk to Newcomb Hall from their offices in the McCormick Road dormitory area.

Another group of employees from the School of Medicine’s Department of Medicine walked from the Health System’s West Complex and joked that the exercise earned them breakfast, though they could have taken a shuttle running between the Lee Street garage and the Central Grounds Garage or taken advantage of the one-hour free parking University Human Resources provided.

Another option offered this year was a scheduled 15-minute group walk, sponsored by Hoo’s Well in partnership with UVA-WorkMed.

The event will be repeated again next year, Human Resources officials said.