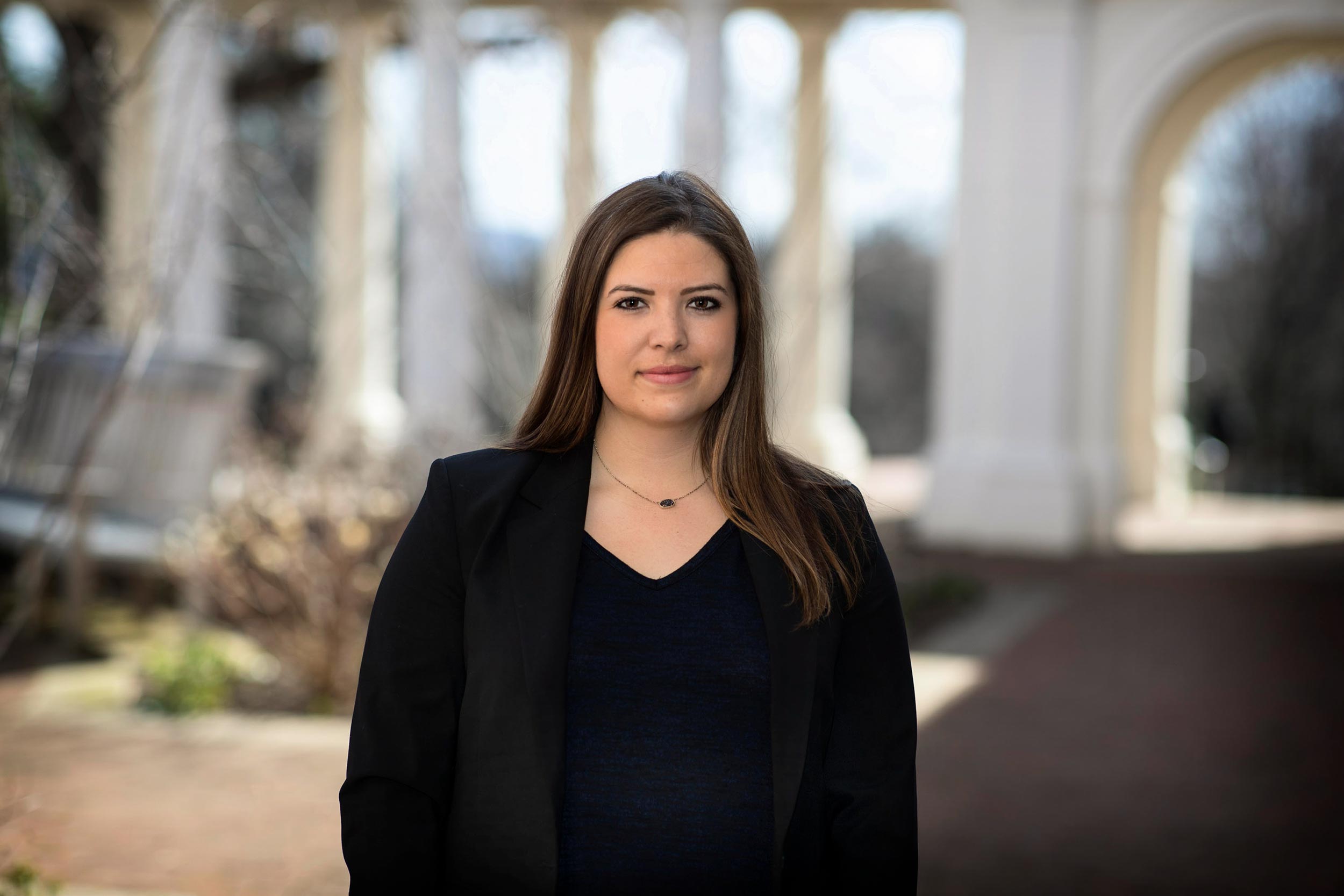 You might say San Diego native Annika Meurer’s criteria for choosing a college was a tad unusual.

Meurer wanted to go to a school outside of California that had strong academics. But one of the main things she was looking for was a college with Division I football and basketball programs.

It wasn’t that Meurer was planning on playing either sport. Rather, she had been a huge sports fan since she was little, and didn’t want to lose touch with that aspect of her life.

Suffice it to say, she hasn’t. Ever since she arrived at the University of Virginia, Meurer has been smack in the middle of the action – not as a fan in the stands, as she had envisioned, but as a participant of sorts.

As a student equipment manager for the football team for the last four years, Meurer’s many duties include “spotting” the ball during practices. Right before the ball gets snapped to start a play and 300-pounders begin colliding with one another, Meurer must place the ball at the correct yard line – and then get out of the way, fast.

According to UVA quarterbacks coach Jason Beck, her job is one of the most important on the field.

“The way we run the offense in practice, there is no stationary spot,” Beck explained. “We’re always moving the ball, and so she’s right in the middle of the action, grabbing the ball and spotting it before the next play goes. If that gets messed up, the whole operation gets set back.”

During the games themselves last season, Meurer held what is considered the biggest managerial responsibility: caring for the footballs.

“I’ve never played a season in so many bad-weather games,” Beck said, “and she had a plan to make sure the balls were all dried and rotated properly. It was invaluable.”

“Originally, it was kind of just a job,” said Meurer, who is paid an hourly wage. “But this job has actually completely changed my career path.”

She originally thought she would follow in the footsteps of her father, a UVA alumnus who grew up in Baltimore, and go into business.

However, during summer orientation in 2015, Meurer’s high school athletic director – who had seen what a great job she did as a manager for the high school football team – put her in touch with former Cavalier head football coach Mike London’s staff, which was seeking team managers.

At first, Meurer wasn’t sure whether she wanted to make such a big commitment as she tried to acclimate to life as a college student 3,000 miles from home.

But Meurer, who grew up cheering for the NFL’s San Diego Chargers and Dallas Cowboys, decided to give it a shot.

Quickly, she was drawn in. “I’m really big on family,” Meurer said, “and I really found that football became my second family here.”

That feeling continued when Bronco Mendenhall took over the program.

Eventually, Meurer realized she might be able to turn her interest in football operations into a career. 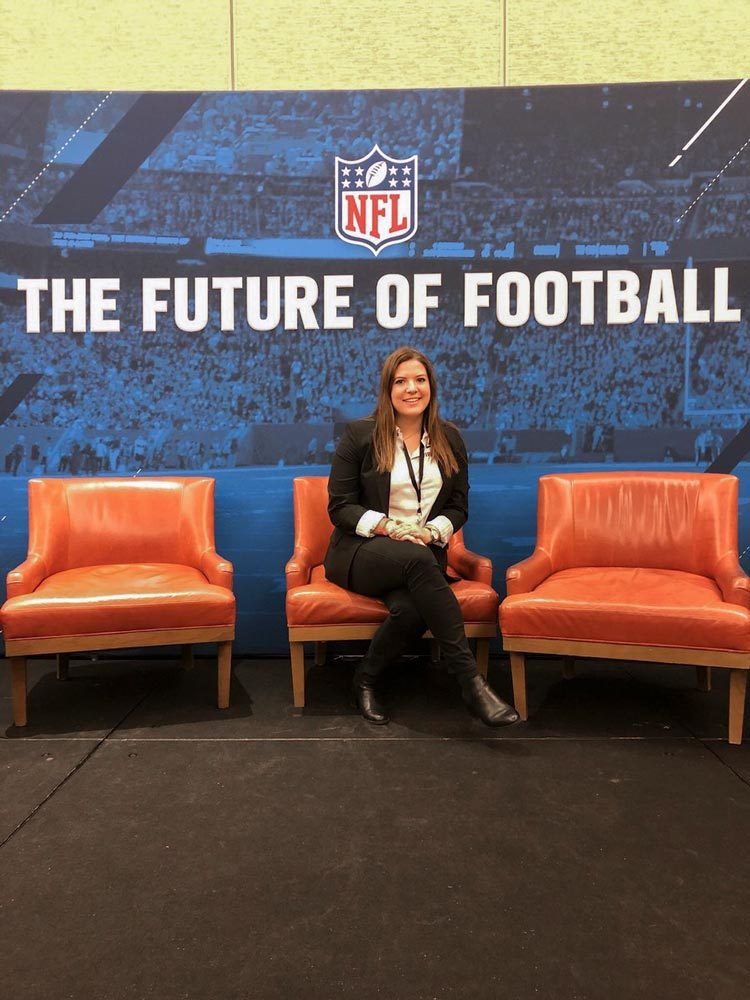 Last summer, Meurer, a media studies major, interned for USA Football in Indianapolis, subsequently accepting a full-time job as an event coordinator that she will start following graduation.

Last month, she was one of 40 women selected to the NFL’s Annual Women’s Careers in Football Forum, which took place ahead of the NFL Scouting Combine in Indianapolis. The goal of the forum was to give students like Meurer a chance to network with a wide range of NFL employers.

“It was just an awesome opportunity to go through a door that hasn’t necessarily been opened for women in a long time in the NFL,” Meurer said. “People have started to realize that they’ve been missing out on 50 percent of the candidates potentially. I just think it was a step in the right direction in trying to get more women in the field.

“I had always been told, ‘It’s going to be really hard for you, you’re going to have barriers.’ So it was really encouraging to hear people who are so high up want to put an emphasis on it. I feel like I’m entering my career at a unique moment of opportunity for women in football.”

“Hearing their stories gives motivation that this is something I could do, and that just because I didn’t play the sport doesn’t mean I can’t help a team or organization in some type of way,” Meurer said. “There are just so many facets and so much that goes on behind the scenes that it’s really fascinating to me.”

Meurer’s long-term goal is to be the director of football operations for a college or NFL team. People who work in that position are typically in charge of travel, security and a host of other behind-the-scenes responsibilities.

Right now, Meurer – whose younger brother and cousin are also UVA undergraduates – is winding down her time as equipment manager.

Beck said she will be sorely missed.

“Coach Mendenhall has very high expectations of everyone in the program,” he said. “It’s one of those things where if you’re not doing an exceptional job, he wants to find somebody who will.

“So for her to be doing this three years [under Mendenhall] means she’s been doing a great job.”

Meurer can’t say enough about her time at UVA and the strong bonds she formed through the program.

“Although equipment isn’t the most beautiful at times,” said Meurer, referring to her laundry duties, “it really helped me get my foot in the door and opened me to a world I had no idea about. I’m forever grateful for the experience. It’s just been unbelievable.”

A Year We Will Never Forget: 2019-20 in Review END_OF_DOCUMENT_TOKEN_TO_BE_REPLACED

‘What Will You Carry With You?’ Remarks From UVA President Jim Ryan END_OF_DOCUMENT_TOKEN_TO_BE_REPLACED