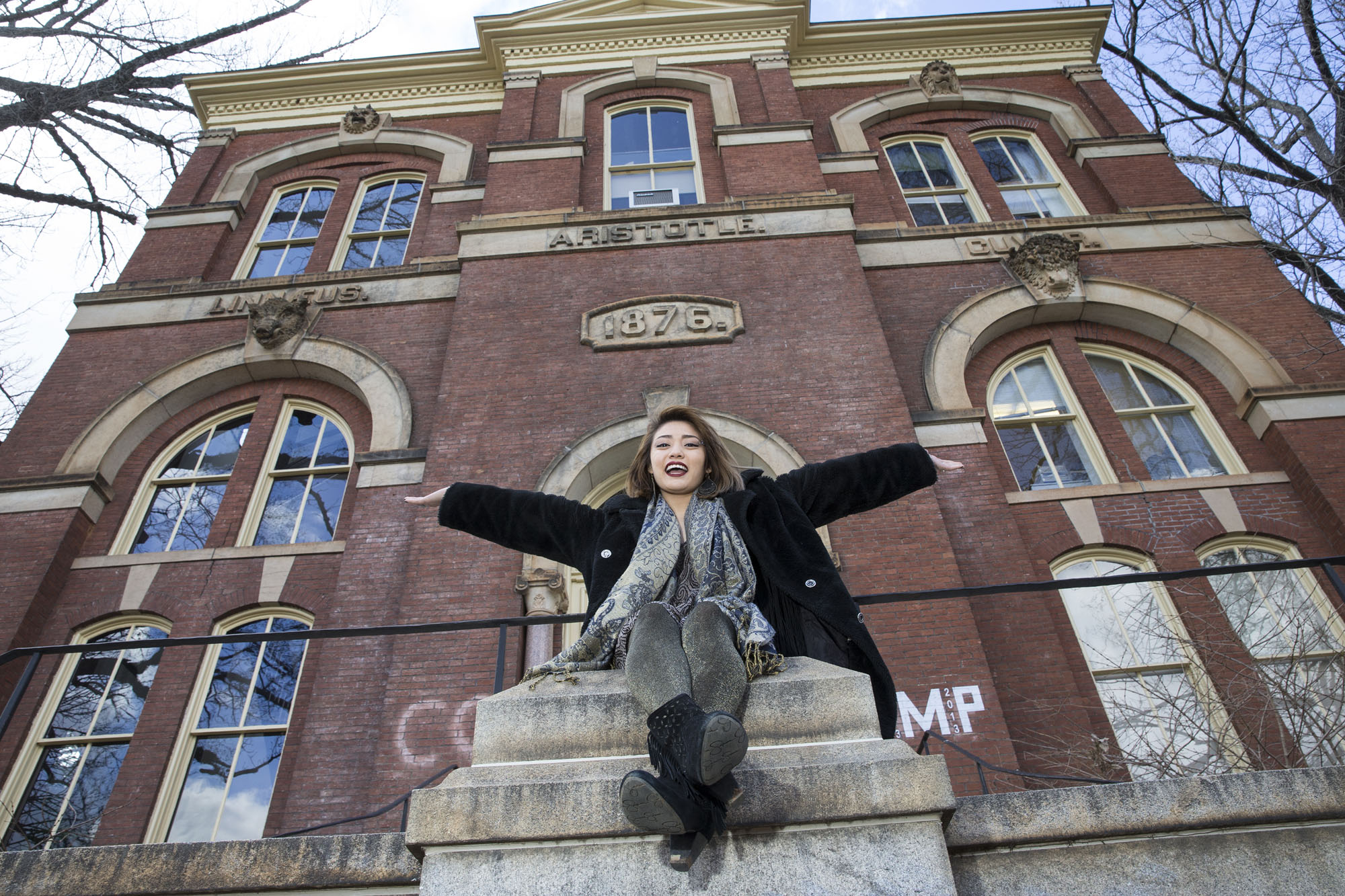 Kiana Williams transferred to the University of Virginia from New York University at the start of her second year. After thriving in the classroom and joining several organizations – she’s the president of the Virginia Anthropology Society, a facilitator for the Women’s Asian American Leadership Initiative, casework intern at the International Rescue Committee, contributor to Iris Magazine, former intern at the U.Va. Women's Center and a member of the Organization of Young Filipino Americans – Williams is now a fourth-year student looking to life beyond graduation.

A Virginia Beach native, Williams is double-majoring in anthropology and women, gender and sexuality, with a minor in film studies. She spent last summer abroad in Peru, where she studied indigenous communities and their relations to public policy and globalization in the mining industry. After graduation, she plans to seek work in service or anthropological research surrounding refugee or women’s issues, and she eventually hopes to pursue a Ph.D. in anthropology.

Williams has also been dancing and acting professionally since she was 4, and she’s competed in gymnastics and college competition-level cheerleading. When she was little, she acted in the national tour of “Miss Saigon.”

A. I loved how community-oriented U.Va. was – it wasn’t at all like that in New York. At N.Y.U., I wanted to be able to do more. Finances were an issue, but one of the primary reasons U.Va. was more appealing to me was because I’ve seen its relentless priority on student self-governance. This past December at a leadership conference Fort Worth, Texas, I was presenting on facilitating Asian/Asian Pacific student leadership on behalf of [the Women’s Asian American Leadership Initiative] and U.Va, and my co-presenters and I were obviously the youngest people there; everyone else was at least a grad student. So that’s something that’s really cool about U.Va. and a huge part of why I wanted to come here, because U.Va. gives students more agency.

That’s a big part of why I wanted to be here, and I also can’t say enough about AccessUVa (U.Va.’s financial aid program) – it’s the reason I’m able to be here. I am so grateful for its immense help!

Q. You’ve been heavily involved in theater and dance your whole life. How have you kept that up during your time in college?

A. I’m doing a bunch of traditional dances for [the Organization of Young Filipino Americans], which has a huge culture show every year called “Bario,” and practicing for that is going to take up a lot of my time this semester. In terms of show business, I don't plan on pursuing it as a career because I love what I plan to do with anthropology, but I'd love to continue to dance.

Q. Why did you decide to major in anthropology?

A. It was actually an accident. At N.Y.U., I was doing media studies with a creative writing concentration – and that’s how you can tell my parents love me; they supported me doing that in a really expensive city. But when I transferred to U.Va., a lot of my courses transferred as anthropology credits. So I came here thinking I was going to continue with creative writing or do psychology, but then I randomly had a minor in anthropology because I had enough credits. Then I took this class called “Fantasy and Social Value,” which was about how sci-fi plays on real life, and I just loved it. I’ve changed my major so many times, and now I love anthropology – so I guess it was a good accident!

Q. As a transfer, where did you go to find your niche at U.Va.?

A. When I got here, I was kind of just floating around, and I heard about [the Women’s Asian American Leadership Initiative] through one of the many emails I’d gotten from the Asian-American listerv. I had nothing on my resume yet as far as leadership, but something cool about WAALI is that they want a mix of really qualified people and people who have no exposure to their Asian heritage, which was me. I met a lot of girls who were involved in that organization, and that kind of sugared me and gave me the confidence to join and get involved in all these other things. So now, I attribute all my success in college to WAALI.

A. Brooks Hall.  It’s so beautiful  – there’s that random elephant in the lounge and these quirky art installations everywhere. I spend a lot of time chilling there doing homework late at night.

Sometimes I’ll be studying there when most people have left, and I’ll hear these sounds of the rainforest parrots randomly, because they were playing tapes during the day and forgot to turn them off at night, so you never know what to expect.

A. On the Corner, I love Revolutionary Soup, Marco and Luca’s, or really any food place. I also like exploring places on the Downtown Mall, because I’m not used to that kind of outdoorsy, brick-paved area – it’s not really like that in Virginia Beach. I’ve had a lot of time to wander around there because of my job at the International Rescue Committee downtown.

Q. How did you decide to study abroad in Peru?

A. Anthropologists usually have an ethnographic focus in one area, and in terms of places abroad I have a big focus in Amazonia, so I was looking at a lot of study-abroad programs that would not only allow me to learn field school methodology, but also somewhere that would let me make sure that this is where I wanted to focus as I was developing my personal statement for grad school. So the anthropology field school in Peru gave me a full ride, and it was really cool because it focused on international law and detrimental effects of illegal mining. Plus I actually got to stay with people in the culture.

I found out about the program through Professor Carrie Douglass, who sent out an e-mail to the majors, and I found that U.Va. would count it as course credit.

Q. Looking back from your fourth year, what’s something you wish you could have told your younger self?

A. It was a culture shock coming here – I came and everyone was completely different from what I was used to. I was totally clueless, and I didn’t know what I was doing with my life or how to make friends.

Now I kind of like that I’m different from everybody. It’s made me appreciate everyone a lot more, and I’ve learned that just because people dress alike doesn’t mean that they’re all the same – it’s not like that when you actually get to know someone.

I’ve also learned that it’s OK to make mistakes. I think that’s something high school doesn’t prepare you for, that you’re going to come to college and you’re going to make a lot of mistakes. Those are learning experiences, and it all eventually works out. Getting a bad grade in one class isn’t going to turn your life around.

A Giant ‘Thank You,’ a Dose of Optimism and Bonus Good News END_OF_DOCUMENT_TOKEN_TO_BE_REPLACED