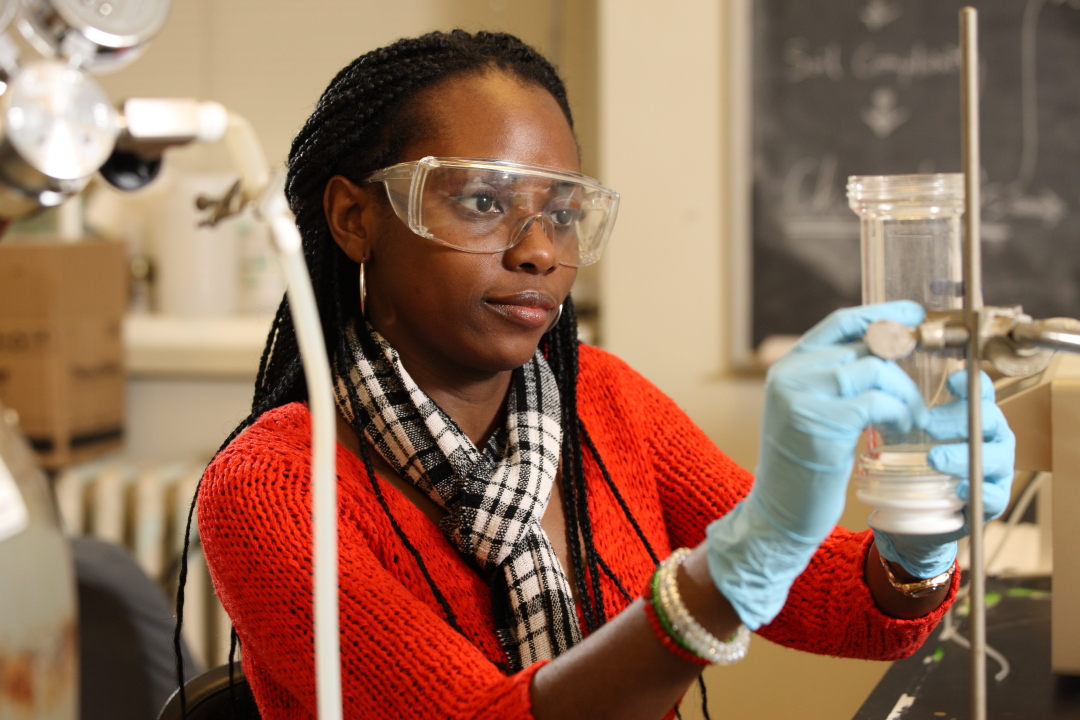 Growing up in Nigeria, Joanna Adadevoh understood that clean water was a precious resource.

Though she herself had access to it – she lived on the grounds of a teaching hospital in Lagos with her mother, an anesthesiologist, and her father, a psychiatrist – she knew that the lack of clean water was a major issue in parts of her country and in Africa in general.

“I think that really resonated with her – recognizing how important clean water is in her country, which is something that we often take for granted in the U.S.,” said University of Virginia chemical engineering professor and department chair Roseanne Ford, Adadevoh’s research adviser.

Now in her third year of a five-year chemical engineering doctoral program, Adadevoh is conducting research into bioremediation, or using microbes to clean groundwater – particularly by removing chemical contaminants.

With Ford’s guidance, Adadevoh is studying how certain bacteria are able to, in effect, “sniff out” a food source – in this case, oil – and then swim toward it through groundwater channels to consume and chemically degrade it.

A better basic understanding of this process could eventually lead to the use of certain beneficial bacteria as a cleanup tool for oil-contaminated aquifers and for other drinking water sources. Such bacteria occur naturally in the environment, are harmless to humans, and, if introduced to an aquifer, would die off or become dormant once the pollutant is consumed.

“We’re trying to understand this process and quantify it and use it,” Ford said.

Adadevoh, 24, first became interested in chemical engineering as an undergraduate at the University of Delaware. Back in Nigeria, she had imagined she would follow in her parents’ footsteps and become a doctor. But when her parents decided to send her to college in the United States, she suddenly saw limitless possibilities.

“I love the way we go about solving problems here,” Adadevoh said. “Typically the issues that need to be solved are big, but we start small by making simplifications and assumptions, and we build our way to solving that big problem.”

In the lab, Adadevoh simulates a polluted aquifer by slow-flowing water through a column of tightly packed sand containing naphthalene crystals as a “pollutant,” simulating oil. She then brings in the bacteria – a chemotactic organism that uses the water as a vehicle for swimming toward the naphthalene crystals.

Adadevoh carefully observes and measures the process. So far, she says, she’s finding “promising experimental results which show that the chemotactic bacteria are retained longer within the column when the pollutant is present” – that the bacteria is very good at finding the food source and degrading it, “even in regions of the sand that are not easily accessible to groundwater flow.”

She noted that minimal energy is required to pump the bacteria into the groundwater, making this a potentially effective bioremediation tool for developing countries as well as for developed nations.

Recently, Adadevoh presented her work at an international conference in California on subsurface microbiology. Her next step is to mathematically model her results, which could lay the groundwork for scaling-up the project to real-world levels. She plans to present the results later this year at a meeting of the American Geophysical Union.

How a Single Email Changed a Life END_OF_DOCUMENT_TOKEN_TO_BE_REPLACED

Fall Is in the Air on Grounds END_OF_DOCUMENT_TOKEN_TO_BE_REPLACED

At UVA, There Is a Club for Everyone END_OF_DOCUMENT_TOKEN_TO_BE_REPLACED