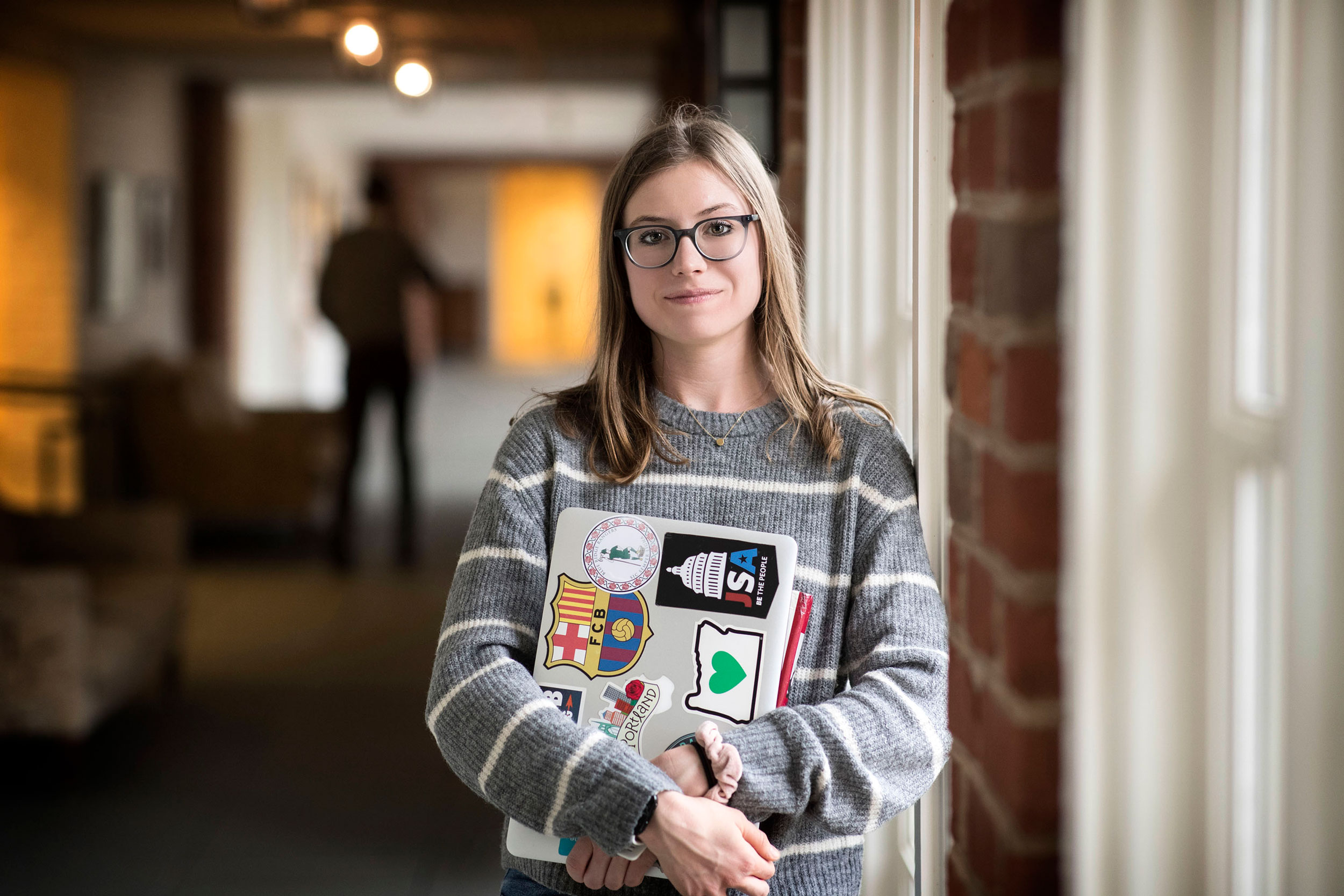 Tucked away in the library at the University of Virginia’s Miller Center, second-year student Katherine Huiskes is surrounded by the voices of past presidents.

There are audio clips of Lyndon B. Johnson, talking about how to get Congress to pass the Civil Rights Act of 1964, and of Richard Nixon, hinting at some of the damning evidence that led to his resignation. John F. Kennedy, Jimmy Carter, Ronald Reagan, Bill Clinton and both George Bushes also make an appearance.

All of it is part of the Miller Center’s Presidential Recordings Program – a vast collection of interviews, tapes and other firsthand accounts of the modern presidency, unlike any other in the country. Huiskes’ job as an intern is to mine that treasure trove to find clips for the center’s upcoming podcast series, which will explore how the modern presidency has affected democracy.

The history and foreign affairs student has also worked on preparations for this week’s Presidential Ideas Festival, hosted by the Miller Center Tuesday through Thursday to explore the history and evolution of the American presidency. Speakers include a who’s-who list from past presidential administrations on both sides of the aisle, with a closing keynote address from former President Bill Clinton, one of just five men living who know what it is like to hold the nation’s highest office.

We spoke with Huiskes beforehand to learn more about her work with the Miller Center, why she loves it and how UVA is helping her realize her goal of working in politics.

Q. Why did you decide to come to UVA?

A. I have always been interested in foreign affairs, and I grew up loving presidential history. I knew I wanted a university with strong politics and history departments, and UVA really stood out. Even though I am from across the country [Portland, Oregon], UVA just felt like the place I should be.

Q. What do you do at the Miller Center?

A. I am the events intern, which means that I help plan some of the center’s many events, promote them, help with check-in and registration and generally help things run smoothly.

I also do research for an upcoming podcast series in conjunction with UVA’s Democracy Initiative. The first episode will focus on times that presidents have arguably subverted democracy or democratic processes, such as when FDR tried to pack the Supreme Court and how Lyndon Johnson went about passing the Civil Rights Act.

Q. What have you enjoyed about working with the Presidential Oral Histories?

A. It’s such a fantastic resource, and it has been so fun to get to really dive deep into a specific topic. It’s different from just giving an overview of an event or person for a school project. I get to spend a lot of time deeply researching something I am really interested in, and it’s been very fun.

I’ve also really enjoyed learning about the podcast format, sitting in on interviews and helping with recording and production. Putting together that work, and working in a professional environment in general, has been really helpful and insightful.

Q. What has surprised you so far?

A. I have been focused on Lyndon Johnson recently, and I have enjoyed learning about his long career as a senator. We mostly think of him as a president now, but he had a huge impact on the Senate and his work there can give you a different understanding of his presidency.

Q. Could you see yourself working in politics one day?

A. Definitely. Both of my parents worked for members of Congress, so I have grown up hearing about that. I would love to do that, or to work in public policy or for the State Department. There is so much I would love to do, I am still deciding exactly which direction I want to take.

Q. Outside of the Miller Center, what have you gotten involved with at UVA?

A. I am really involved with the club cross country team. I love to run through Grounds, or along the Rivanna Trail near North Grounds. I’m also active in RUF, a Christian fellowship group at UVA.

Here Is What You Need to Know About the New Coronavirus Variant, Omicron END_OF_DOCUMENT_TOKEN_TO_BE_REPLACED

Fall Is in the Air on Grounds END_OF_DOCUMENT_TOKEN_TO_BE_REPLACED

Meet the Cats and Dogs Your CVC Donation Supports END_OF_DOCUMENT_TOKEN_TO_BE_REPLACED