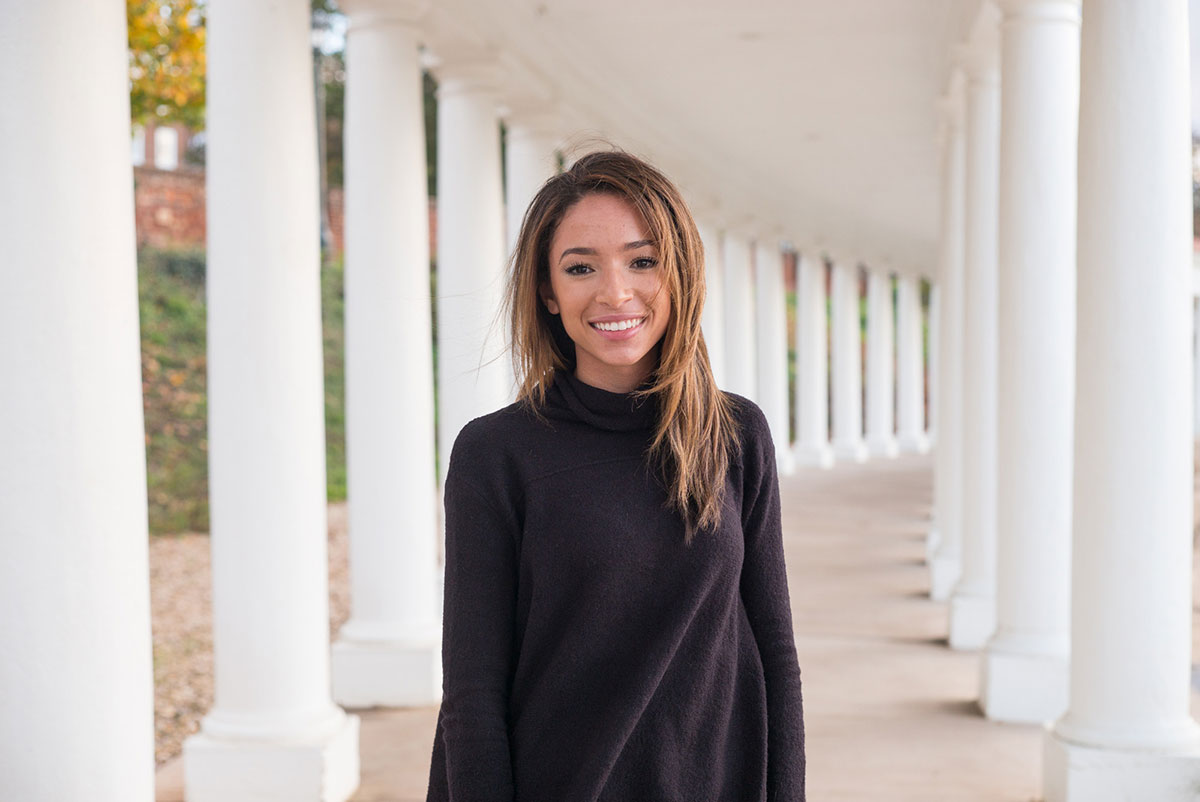 Mechanicsville native Nena Evans’ time at the University of Virginia has been shaped by a dedication to community. The fourth-year statistics major was inspired by the passion she saw when she first visited UVA, and she’s carried that drive with her ever since.

Evans, a long-time Madison House volunteer, now serves as the head program director for its English Speakers of Other Languages Program. She takes great pride in seeing students progress through the program and enjoys collaborating with other program leaders on initiatives around the Charlottesville area.

As she prepares for graduation and life outside of Charlottesville, Evans sat down with UVA Today to discuss the University’s strong community of service and the impact that it’s had on her.

Q. In your video, you said that the first minute you stepped on Grounds you knew it was going to be your home. What made you feel that way?

A. When I think about the moment when I decided to come here, it was instantly when I stepped on the Lawn for Days on the Lawn. The band was playing, with the Rotunda on one side and the Lawn spread out on the other, and I was with a bunch of people who were so excited to be here, especially the people who were leading it.

Q. You’ve been involved in volunteer work since you started here. Why do you think there is such a strong commitment to service at UVA?

A. I think one part of it is that a lot of people come to UVA having done some type of service before, but I also think that everyone who goes to UVA really cares about Charlottesville, and one way that we care about the city is by giving back to it. To me, that means leaving this place better than the way that it was when I got here.

Q. The language-skills teaching you do through Madison House dives into a different type of education than your major in statistics. What made you choose that?

A. I’ll be honest, when I got here I didn’t even know what the English Speakers of Other Languages Program was. But one thing that I did know when I got here is that Charlottesville has a really large refugee population. That drew me into English as a second language, when I saw that it was a big need here because of the unique makeup of Charlottesville.

That work and statistics really don’t have a huge correlation, but being able to communicate is really important for both. To be an effective statistician, you have to be able to communicate well, especially in the job force. It’s imperative that you can speak in layman’s terms and have a normal conversation with someone when you’re trying to discuss statistical information and data.

Q. What other groups and activities are you involved in?

A. I’m now head program director for English Speakers of Other Languages and that’s definitely been one of my biggest leadership roles here, because it’s something that I’ve been passionate about since I was a first year.

I’ve also been a group exercise instructor at the Aquatics and Fitness Center, which was really cool. I was able to do that through a class here at UVA called “Introduction to Group Exercise.” At the end of the class, you did a little audition and took an exam and then you were certified to teach a group exercise class at the AFC. I taught a dance fitness class for a few years.

I’m a statistics tutor, too, and it’s great to see the different people who I’ve tutored grow throughout the semester. A lot of them start out hating statistics, and by the end they think, “This isn’t so bad.” That’s really rewarding for me.

Q. Do you know your plans after graduation?

A. Yes, I’m going to be working as a business intelligence analyst at the Markel Corporation in Richmond starting this summer. I’m really excited about that.

Q. Have you thought about ways you’d like to keep serving the community as an alumna?

A. I know Markel does a lot with the community. They even have at-risk high school youth come in and intern for the summer so they can get a chance to learn a lot of those things that you just never would get to learn in a high school setting. That will be a chance for me to work with an age group that I’ve taught before, which is really great.

Beyond that, I think there are a lot of opportunities for service. It’ll just be a matter of my own initiative and seeking it out first.

Q. What have UVA and the Charlottesville community given back to you?

A. I feel like I’ve grown as a person so much here. UVA and Charlottesville as a whole have allowed me to become myself and know who I am. I think a lot of times people come here thinking maybe they know what they want to do or who they are, but I’ve really found that I’ve developed so much as a person here. I attribute a lot of that to UVA and to the people here, the students and faculty alike. You’re around people who are so passionate. Everyone is concerned about your success. Everyone wants you to grow.

A Year We Will Never Forget: 2019-20 in Review END_OF_DOCUMENT_TOKEN_TO_BE_REPLACED

‘What Will You Carry With You?’ Remarks From UVA President Jim Ryan END_OF_DOCUMENT_TOKEN_TO_BE_REPLACED