More than 200 University of Virginia students are veterans or active military personnel. Their years of service bring a particular depth of experience to the UVA community, and their work here is enriching the world beyond Grounds.

In honor of Veterans Day, UVA Today asked six of these student veterans to share their stories and their plans for the future.

Mia Carhart, a Doctor of Nursing Practice candidate, was only 5 when her family fled Cambodia to escape the brutality of the Khmer Rouge, but witnessing how the Red Cross helped refugees there has always stuck with her.

“I guess over time I kind of realized that those were the people who were helping others and I wanted to be part of that,” she said. 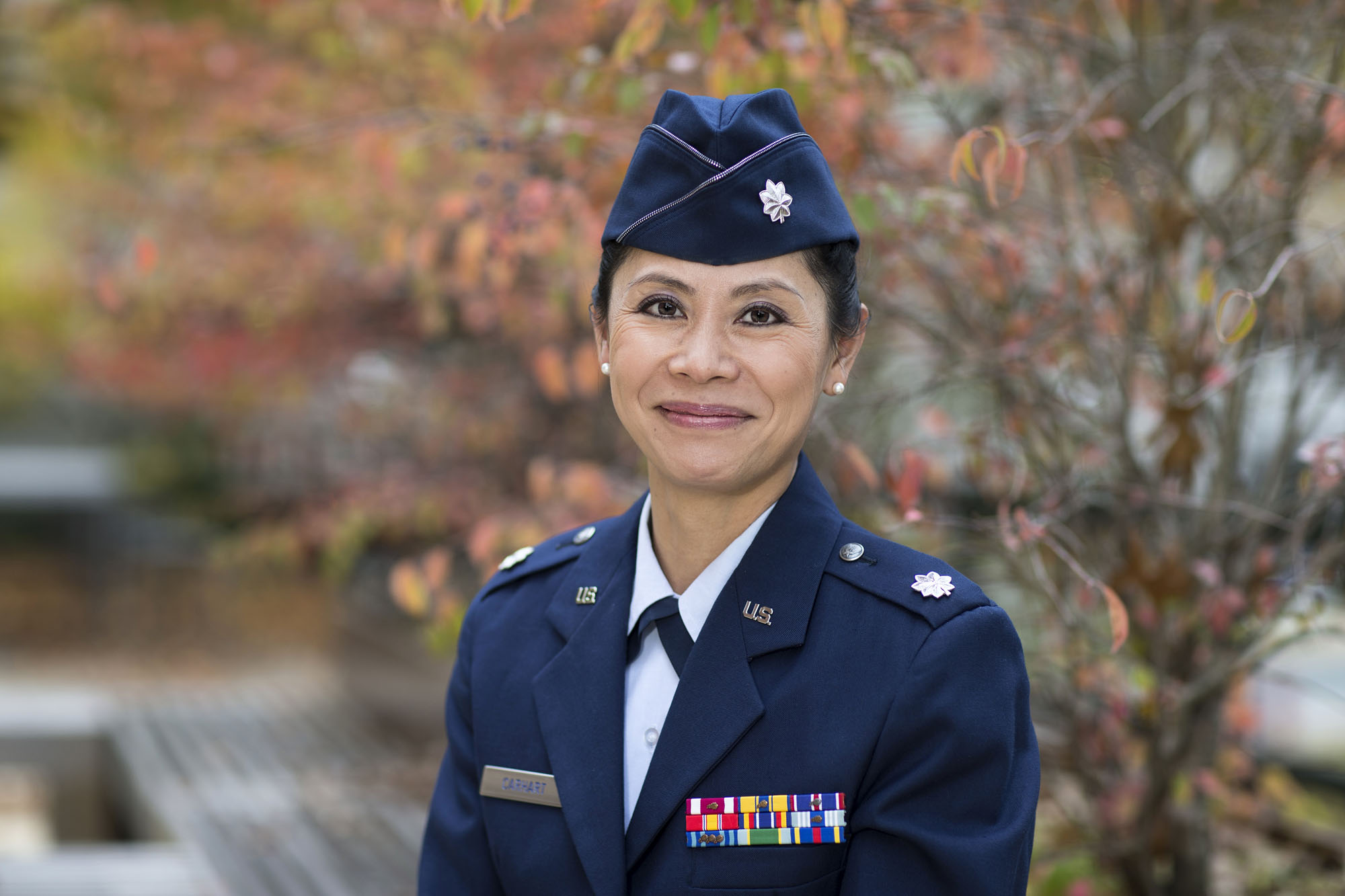 After earning her bachelor’s degree from UVA’s School of Nursing in 1995, Carhart joined the Air Force mainly to gain some quick job experience. She never imagined she’d stay.

“Being from Cambodia and having experienced war, I was afraid of war and every part of it, so I wasn’t sure if the military was really for me,” she said. “But here I am 20 years later because the Air Force has been really good to me.”

Carhart specializes in women’s health and has served all over the United States and across the world. She’ll receive her next assignment shortly before she graduates as a “double ’Hoo” this spring.

Before she goes, Carhart has one piece of advice for new nurses.

“Pursue your love and find good nurses to guide you,” she said.

Third-year student Steven Kiernan was just 17 years old when he joined the U.S. Marine Corps. During his five years in the Corps, he rose to the rank of sergeant and received a Purple Heart for his service in Iraq.

When he first returned to civilian life in Virginia, Kiernan wasn’t quite sure what he wanted to do and he credits his wife with encouraging him to go back to school. 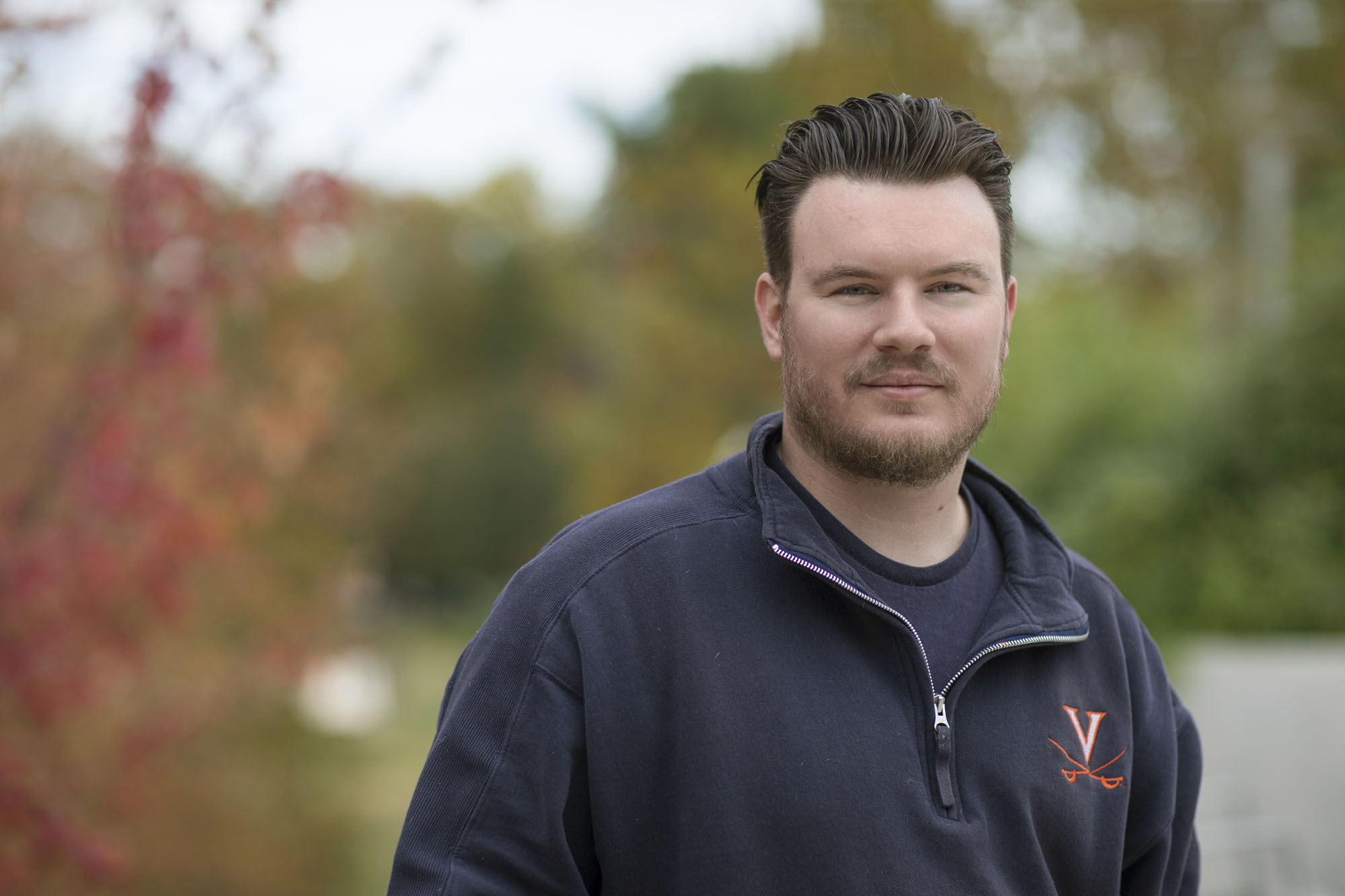 He started at Germanna Community College near his Fredericksburg home and after a year there, successfully applied to transfer to UVA. Here, he soon found a home in the College of Arts & Science’s close-knit Creative Writing Program.

“The Creative Writing Program is really small, so all of our classes are really focused,” he said. “All the professors there are really good.”

Kiernan is also an active member of the UVA chapter of The eSports Association, or TeSPA, a network of the top collegiate talent in e-sports and gaming, and leads their Counterstrike team.

He hopes other veterans will follow his example in finding their niche at UVA.

“To other vets out there, I would just like to say, we tend to impose this self-isolation on ourselves and I think it’s better to break free of that,” he said “Even if they’re not all veterans, you can find a nice, tight group of people because we’re all students.”

Before he joined the Army Reserve, third-year law student Chris Fry was something of a jack-of-all-trades. He’d been putting himself through college, first as a garbage truck driver and then while running his own installation business for point-of-sale machines. 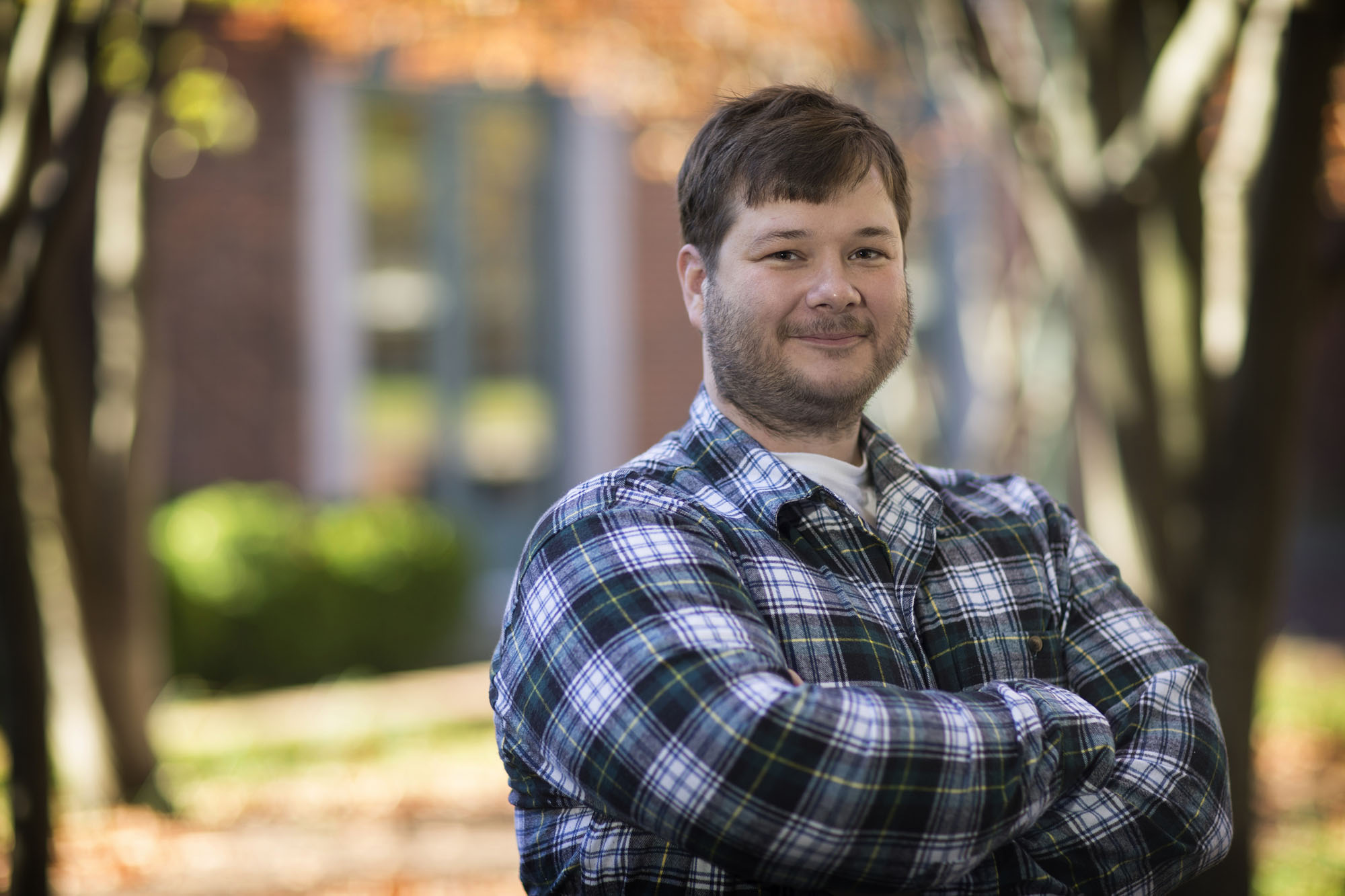 At 29, Fry paused his studies at Pennsylvania State University so he could serve his country while he was still able.

“I was given so much opportunity in this country and I always wanted to give something back,” he said.

Fry was in the Army Reserve for six years and was deployed to Afghanistan during that time as part of a critical route clearance unit. Today, as he looks toward his final semester at UVA’s School of Law, he is still giving back.

As president of the Law School’s Advocates for Disabled Veterans group, Fry is building a coalition of law students who can provide pro bono legal research and support to attorneys representing disabled veterans.

“We’re looking to put on a service day in the spring and get things rolling so that in the next few years we can expand from one day to [spending time on] even more cases throughout the year,” Fry said.

Military service is in Gordon Briscoe’s blood. When he joined the Army in 1989, he was proudly following in the footsteps of several family members. He also thought he’d follow the family tradition of becoming a pharmacist, but was drawn to the therapeutic relationship of nurse to patient.

Now Briscoe is pursuing his Doctor of Nursing Practice degree with the UVA School of Nursing. His doctoral scholarly practice project and area of focus is in nephrology, the study of kidney functions and diseases of the kidney. 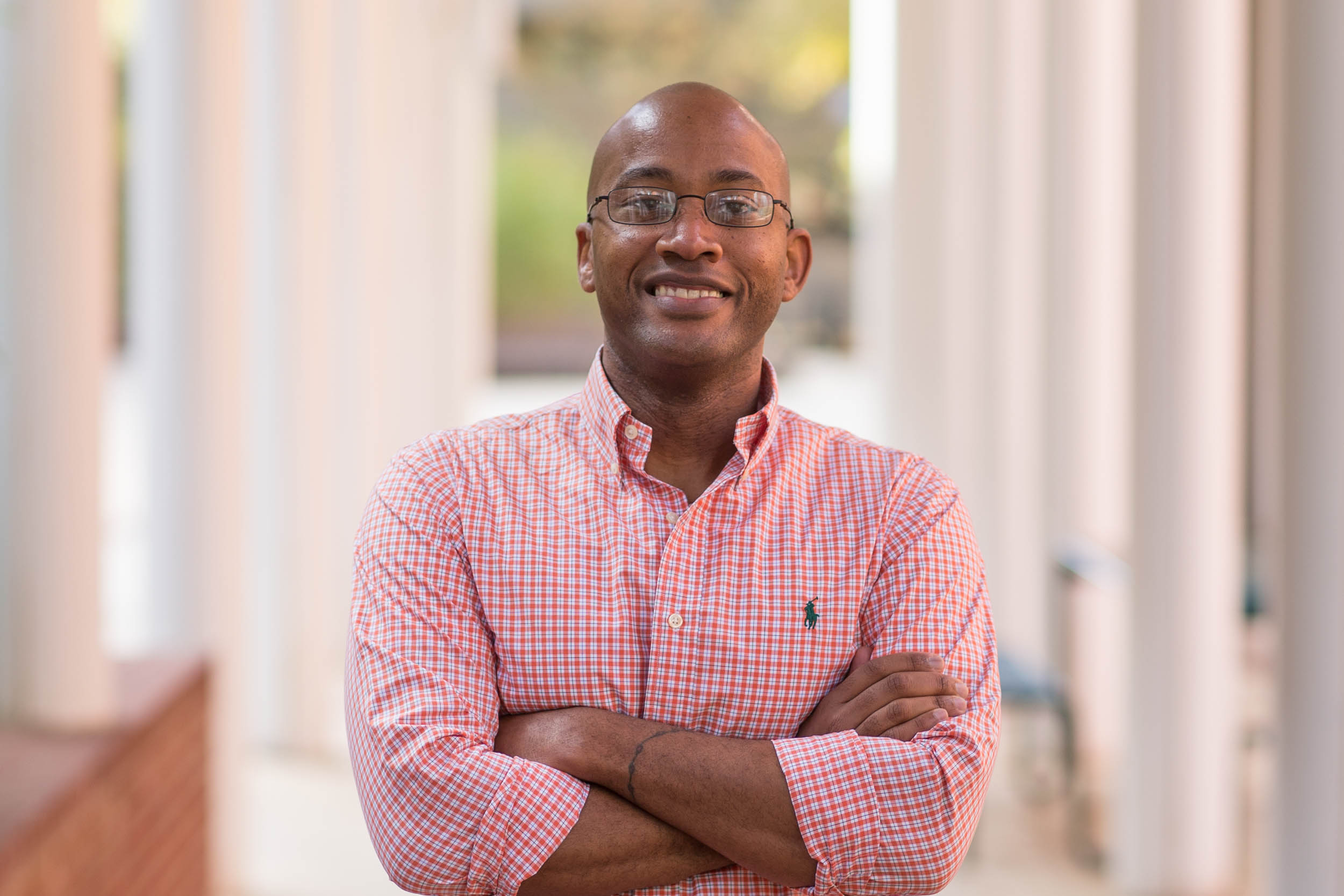 “I’ve always been one to help where I see a need,” he said. “I hope to eventually work within underserved communities teaching patients how to take care of their kidneys and live a good life with kidney disease.”

Through his studies, Briscoe is preparing to become an adult-gerontology acute care clinical nurse specialist/nurse practitioner, someone specially trained to manage patients in critical care units. He has had prior experience with high-need patients as a critical care nurse at the San Antonio Military Medical Center.

“I was given the privilege of becoming a member of United States Army Burn Flight Team and the Adult Extracorporeal Life Support Program,” he said.

On that team, he helped provide worldwide assessment, treatment and transport of military personnel with thermal and non-thermal trauma. Although he’s not sure where he’ll be assigned after his 2017 graduation, he said that he hopes to return to the Burn Center and apply the research-based patient management techniques he’s learned at UVA.

Second-year graduate student James Cathro has been dreaming of Charlottesville for a long time. In the early 1990s, Cathro’s late father got a deal on a beautiful farm in Albemarle County, a place he hoped his family would eventually settle.

After more than a decade on active duty as an explosive ordinance disposal officer in the Navy, Cathro could think of nowhere better to launch the next phase of his life. 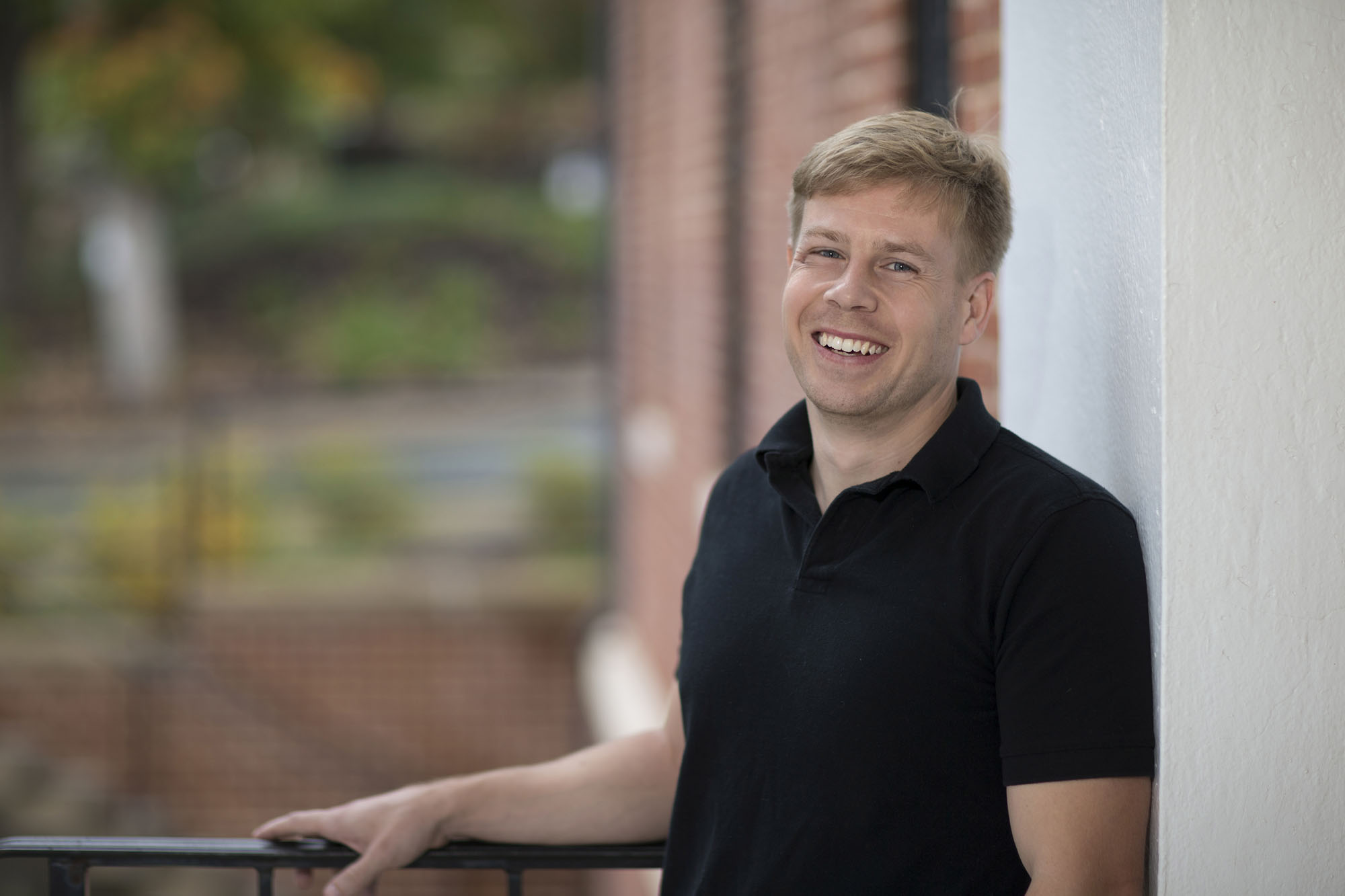 He and his wife – also a naval veteran – have spent the last two years giving the farm what he calls some much-needed “TLC,” most recently by preparing it for the arrival of their now-seven-week-old son, Duncan.

After they moved in, Cathro didn’t have to look far when he started considering graduate school. UVA’s Frank Batten School of Leadership and Public Policy was a perfect fit.

“The thing I liked most about the military was that every day I got to go home and go to bed feeling like I did something that served the community,” Cathro said. “I wanted a school that would prepare me to continue serving my community after I got out.”

While working on his studies at Batten, Cathro still regularly serves his community as a member of the Navy Reserve.

Fourth-year student Dan Krimowski believes that the business of being a soldier prepared him for success in the McIntire School of Commerce.  As a sergeant in the U.S. Army, he specialized in human intelligence gathering.

“Success at McIntire is all about time management, and veterans know how to do that,” he said. “We’ve already had this full-time job that’s basically 24/7, so we know a lot about managing our days.” 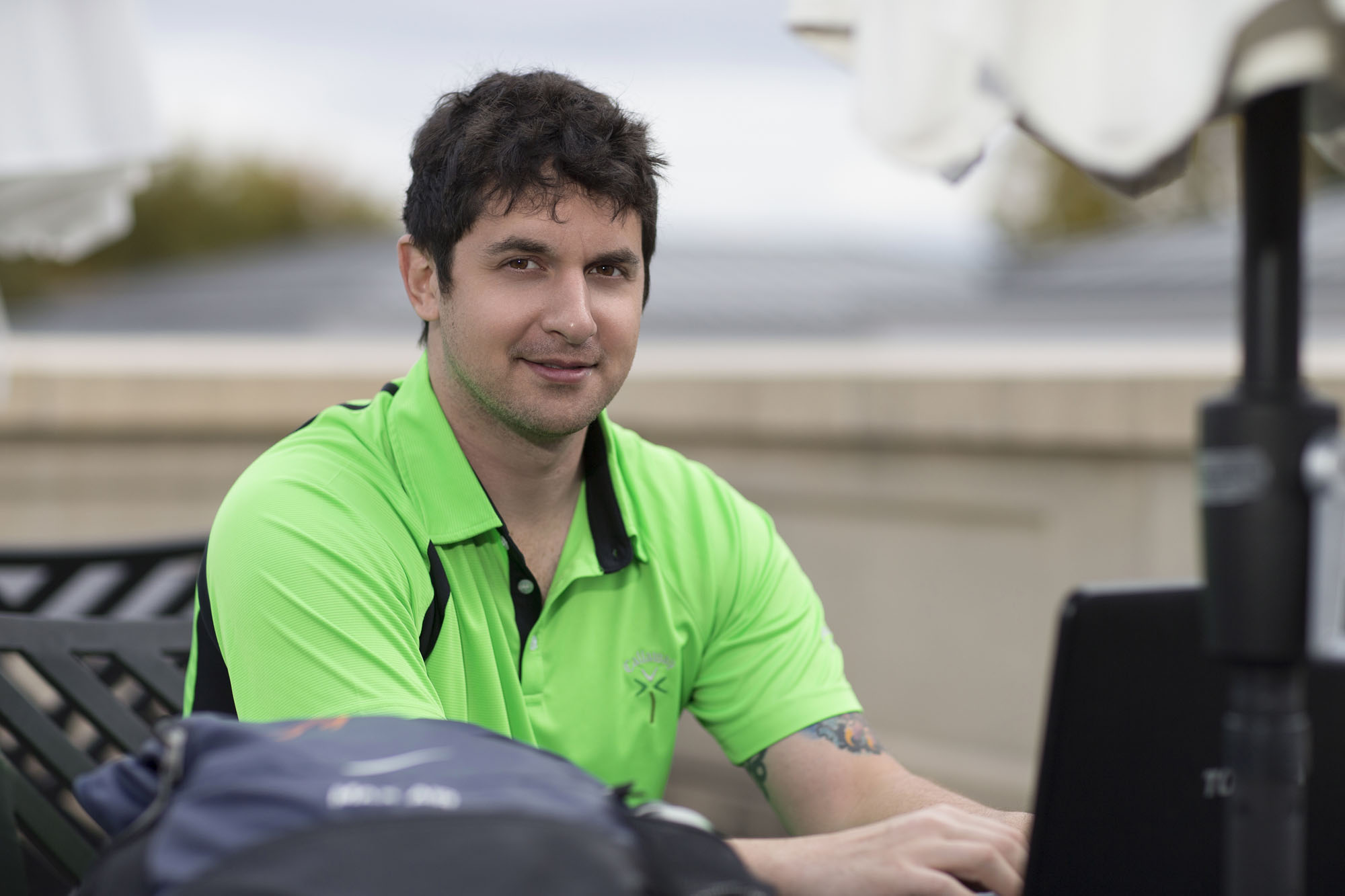 Certainly time management has been paying off for Krimowski. After transferring from Piedmont Virginia Community College in 2013, he’s maintained a high grade-point average throughout his time at UVA and is already entertaining multiple job offers.

While most of his focus is on his studies, Krimowski also makes a point of being available as a resource to other veterans. He’s been working with the community college and UVA’s Office of the Dean of Students to get his contact information out to new and prospective veteran students.

Krimowski wants anyone who is interested to know that he’s available to talk about his experience applying to and navigating school here.

“My goal is to help more vets get here,” he said.

A Year We Will Never Forget: 2019-20 in Review END_OF_DOCUMENT_TOKEN_TO_BE_REPLACED

‘What Will You Carry With You?’ Remarks From UVA President Jim Ryan END_OF_DOCUMENT_TOKEN_TO_BE_REPLACED