Update, April 3, 2017: Agrospheres took first place and a $15,000 prize at the ACC InVenture Prize, an annual undergraduate entrepreneurship competition held Friday at the Georgia Institute of Technology. The UVA-founded biotech company climbed to the top of an impressive field of student teams from all 15 Atlantic Coast Conference universities. Another UVA team earned second place in last year’s competition with Contraline, a student start-up developing a long-lasting male contraceptive. Readers can find out more about how Agrospheres got started and where it’s headed in this original story UVA Today, published in 2016.

Imagine you’re a farmer whose crops are nearing their harvest time. You’ve just sprayed them with standard pesticides to keep the bugs away until the fruit is ready, and then you see a report that there will be huge storm in your area this week.

You want to pick the fruit a little early so you don’t risk losing some, or all, of the crop due to bad weather, but it’s dangerous. You’d be breaking the law and putting the health of your workers at risk if you begin picking the fruit before the pesticide has the chance to fully degrade off the plants naturally, a process that usually takes at least two weeks.

A new undergraduate-led company at the University of Virginia has a solution for this common problem in agriculture. “Agrospheres” is a bioengineering start-up that has created a solution that can be sprayed on pesticide-treated plants to safely and rapidly remove potentially harmful pesticide residue. 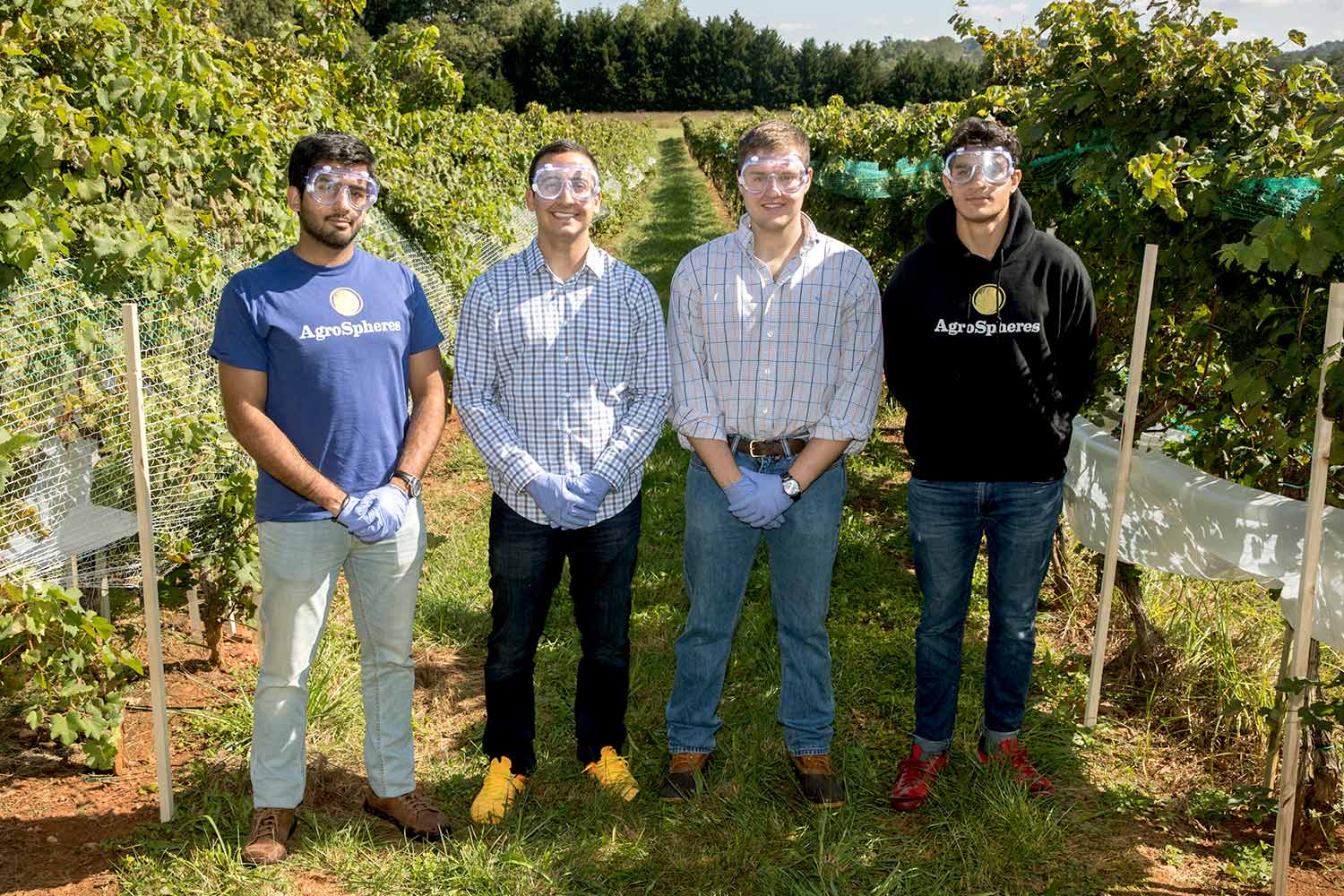 The spray is created from bio-particles, microscopic biologic platforms that deliver pesticide-degrading enzymes. It makes plants safer for workers to handle and allows farmers more control over their harvest time.

“What we mean by a ‘platform’ is that the technology we’re using is a spherical bio-particle we’re attaching enzymes to. Essentially it’s just a carrier that can be modified to work with different enzymes for different purposes, from degrading pesticides to breaking down other substances,” fourth-year biomedical engineering major Ameer Shakeel said.

Shakeel helped co-found Agrospheres with 2016 graduate Payam Pourtaheri while they were both still students in UVA’s School of Engineering and Applied Science. They began working with UVA pharmacology professor Mark Kester as their adviser and eventual co-founder as they considered applications for the bio-particle platform. Though this is his first foray into the agriculture industry, Kester, who is director of UVA’s NanoSTAR institute, has experience using similar cell platforms as drug delivery systems.

The bio-particles and the pesticide-destroying enzymes they contain are used to create a spray. After testing this process in the lab for over a year, the Agrospheres team began their first field tests for their spray.

The team is collaborating with local partners Early Mountain Vineyards and Veritas Vineyards to test their spray on small sections of their grape crops.

“Based on our tests so far, it’s brought the pesticide residue down to an almost non-existent amount in a matter of hours,” Pourtaheri said. “We’re also very interested in how our spray impacts pesticides that make it into runoff water. Some pesticides have a half-life of up to 21 weeks in water, so once they get into the water supply they can stay there for months. Our early results indicate that if we could spray our spray in the affected water it would degrade pesticide residue in as little as 15 minutes and would be totally safe. After a few days, our spray just degrades into harmless sugars and proteins.”

In the photos below, members of the Agrospheres team test their spray on grapes at Veritas Vineyards and measure for any remaining pesticide residue in the runoff. 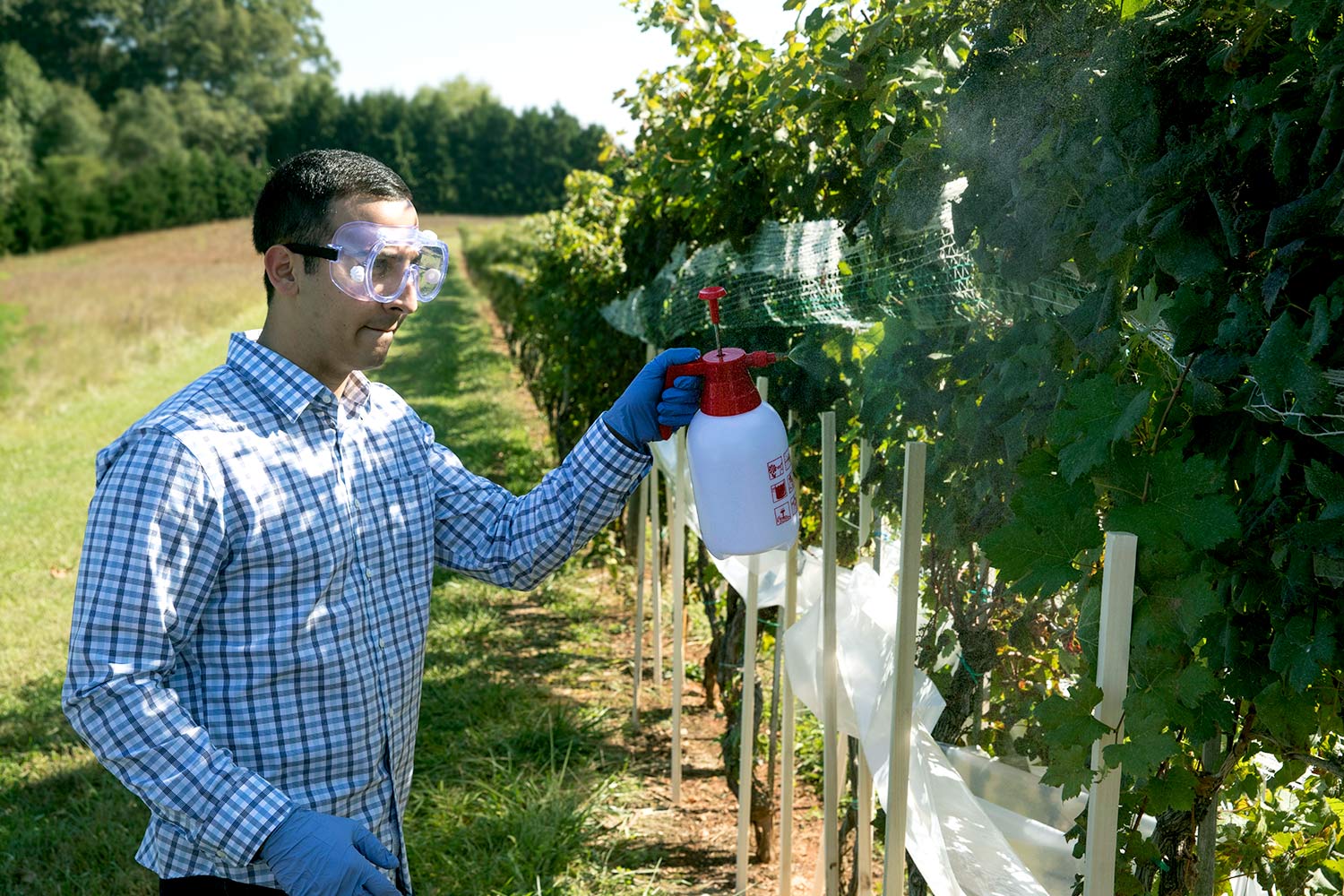 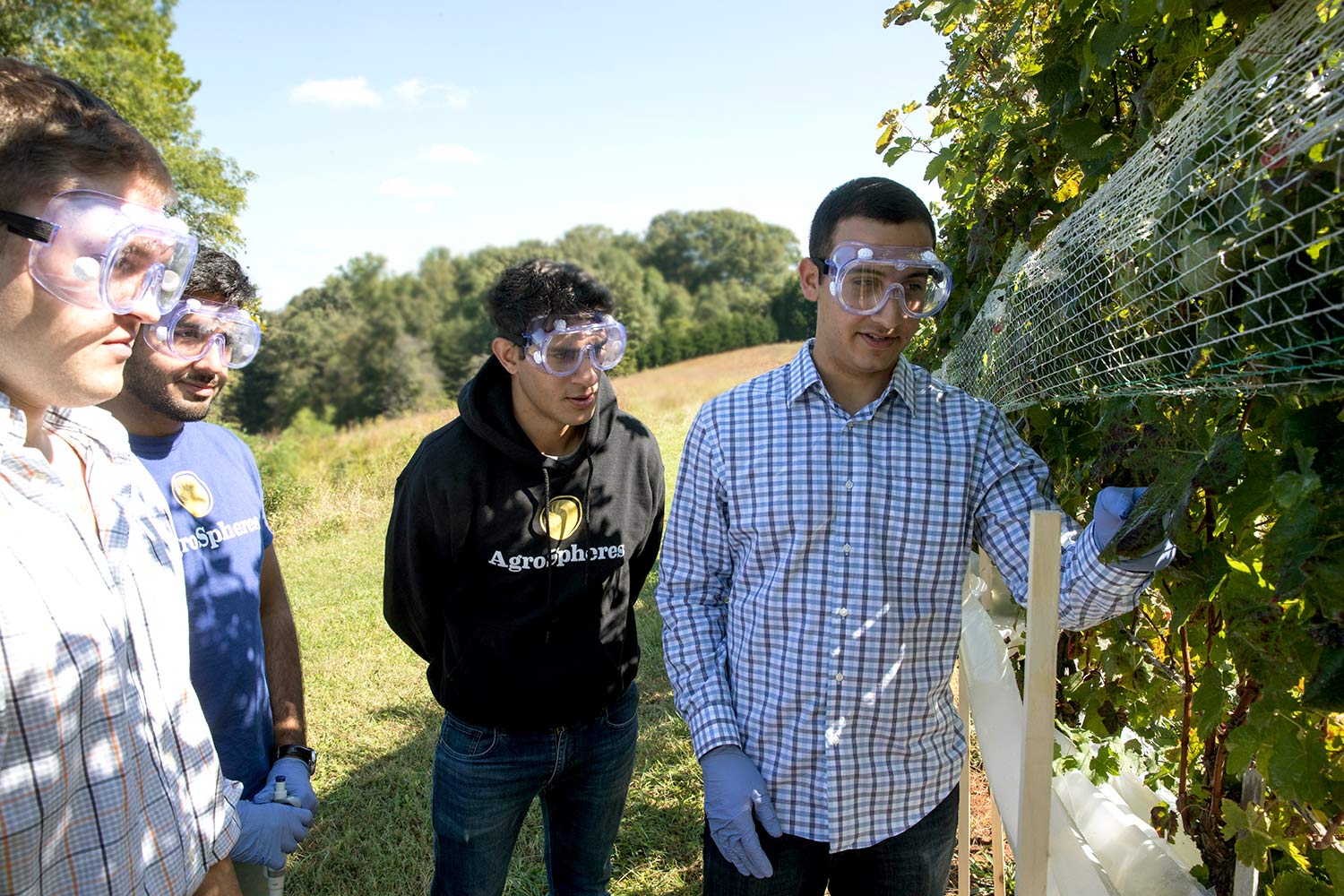 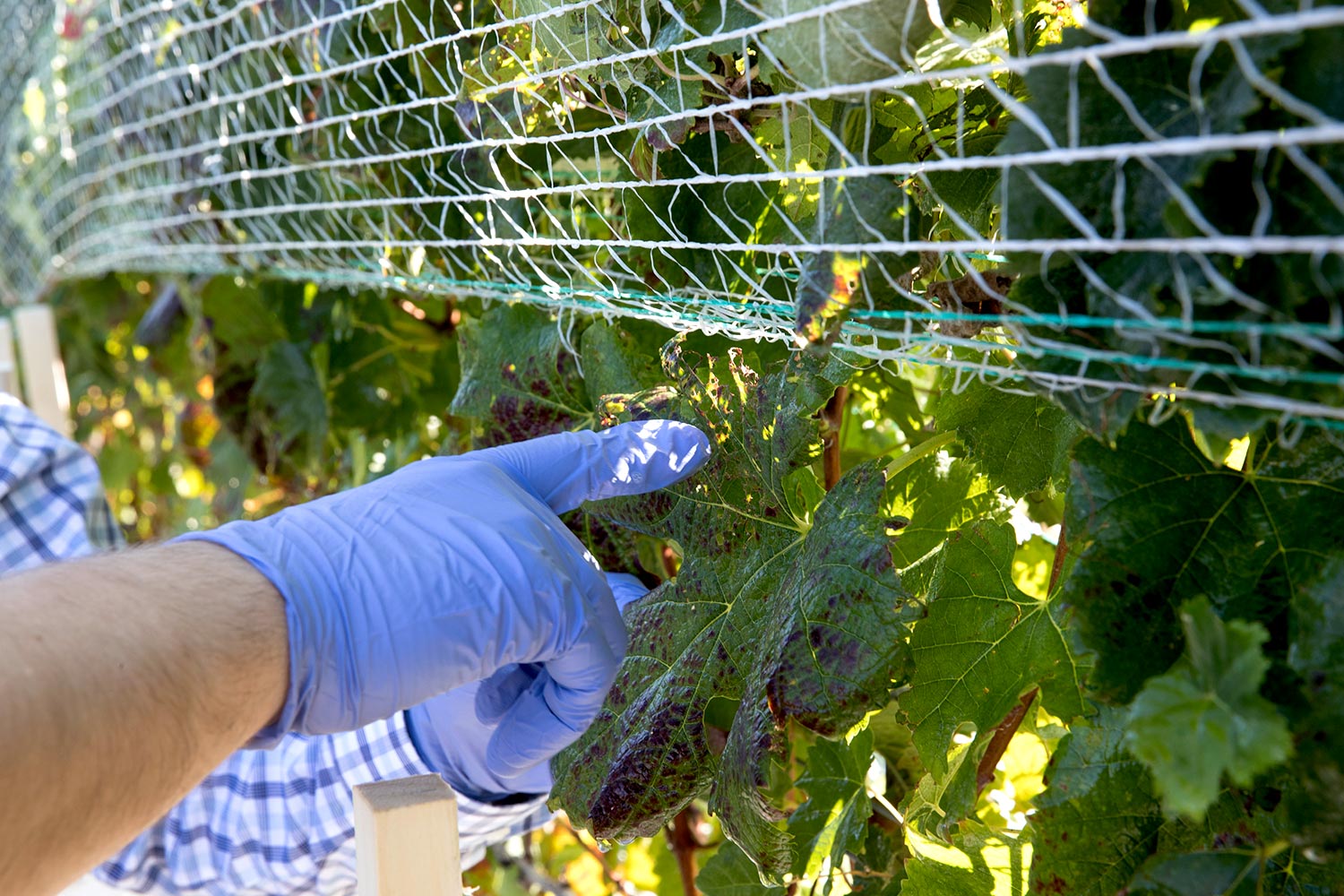 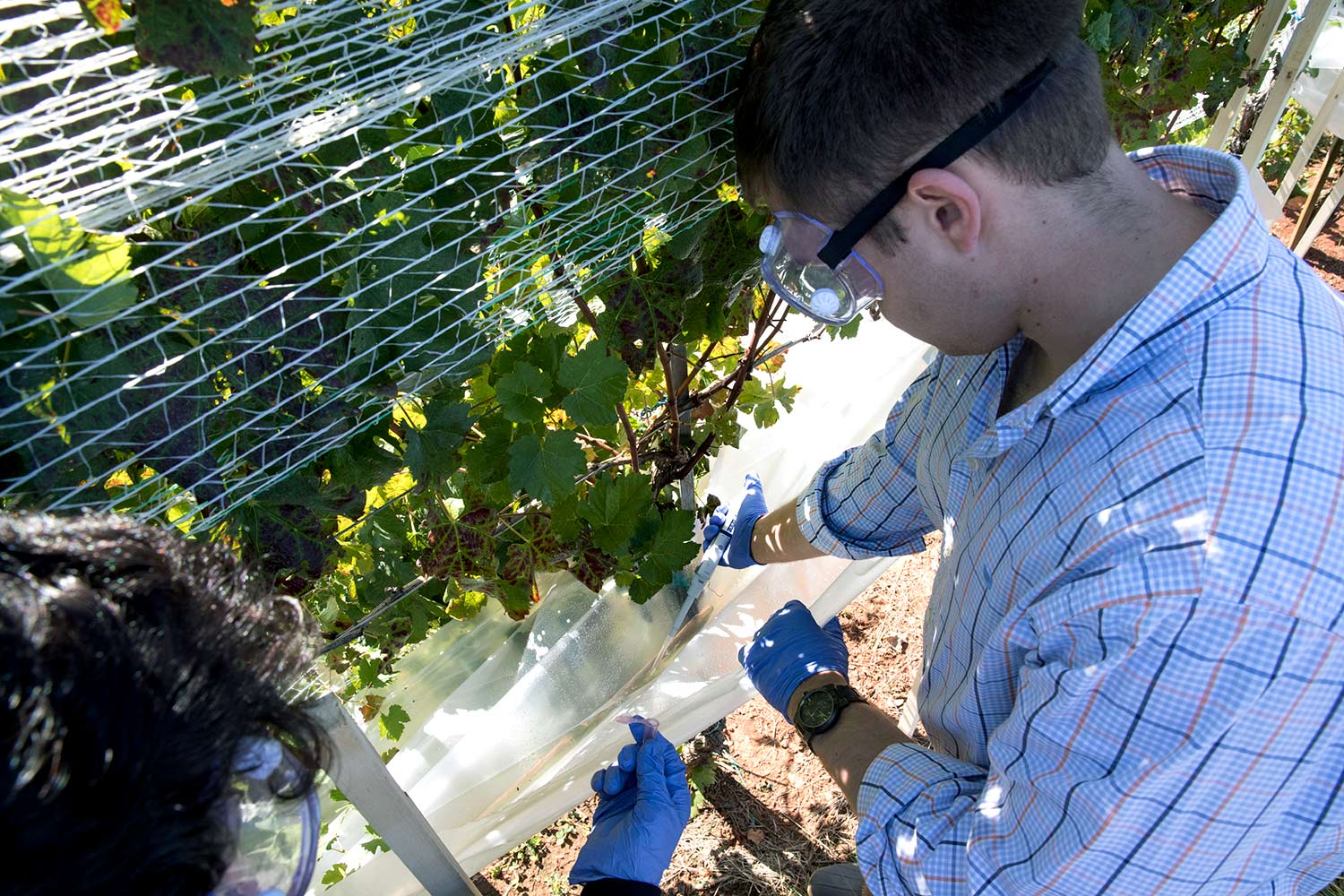 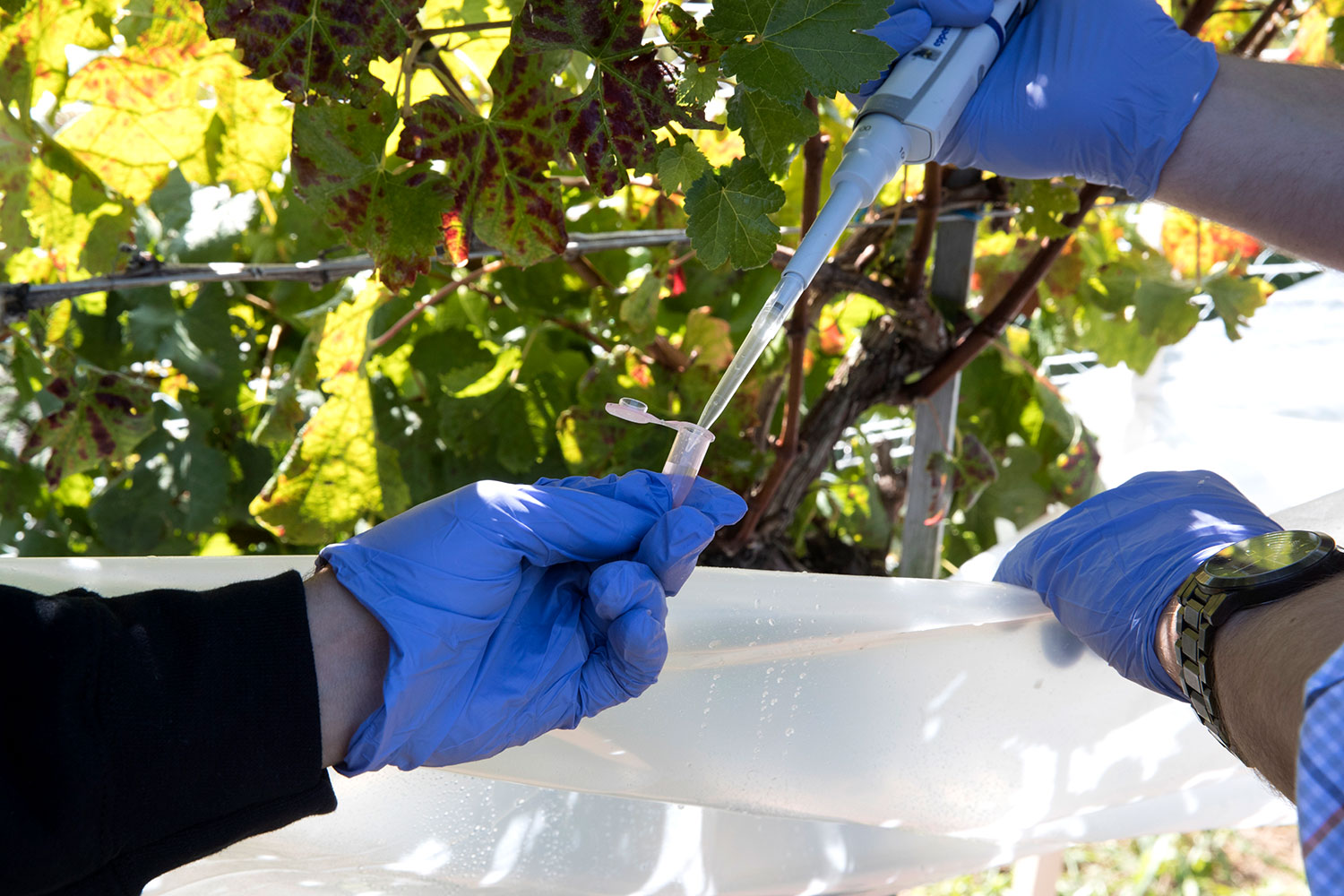 As evidence of the spray’s potential impact mounts, Agrospheres is earning more and more investments and entrepreneurial accolades for their work. In 2016, they won first prize and $22,500 in the University-wide Entrepreneurship Cup and $25,000 in equity-free grant funding during the Virginia Velocity Tour’s public pitch competition.

The company was also invited to share its work with other international innovators at the elite Hello Tomorrow Global Summit in Paris and went on to win first place and a $10,000 prize in the undergraduate category of the Collegiate Inventors Competition in the fall.

“The fact that a company with this technology was founded by a group of undergraduates is an unbelievable testament to the quality of our students and the quality of our entrepreneurial faculty,” Kester said. “Our professors are not only teaching about their research areas, they’re also teaching how that research can be commercialized and used in concrete ways by today’s society.”

In addition to the strong support it has received from UVA faculty members, Agrospheres also participated in the University's i.Lab incubator program and has worked closely with the UVA Licensing and Ventures Group to obtain a patent for its product and to prepare it for commercialization.

Having that patent on the bio-particle platform not only speeds the commercialization process, but also allows Agrosphere’s founders to explore the full range of possibilities for its use. Right now, they are using it to carry an enzyme that targets and destroys roughly 36 percent of the most common pesticides used by the agriculture industry.

“This is a truly a multipurpose platform and we’re just going after the low-hanging fruit first – literally, because we’re working with grapes at the moment,” Kester said. “But this will work for common pesticides used on other produce as well. We’re already doing some work with the apple industry and we’re looking at blueberries and strawberries, too.”

Degrading pesticides may be just the beginning for Agrospheres. The team already sees areas outside of agriculture where its platform could be used to degrade toxic materials and improve health and wellbeing. Knowing that the spray can safely dissolve in water after it’s finished working opens many new doors. In the future, the founders hope to experiment with enzymes that can degrade common contaminants and other waste materials that often make it into the water supply.

“We first got into this work because of the health and social impact of degrading toxic substances like pesticides,” Shakeel said. “Now we know the larger bioremediation potential and the immense health benefits that could be possible with our platform.”

When Less Is More: How Harnessing the Power of Subtraction Can Add to Life END_OF_DOCUMENT_TOKEN_TO_BE_REPLACED