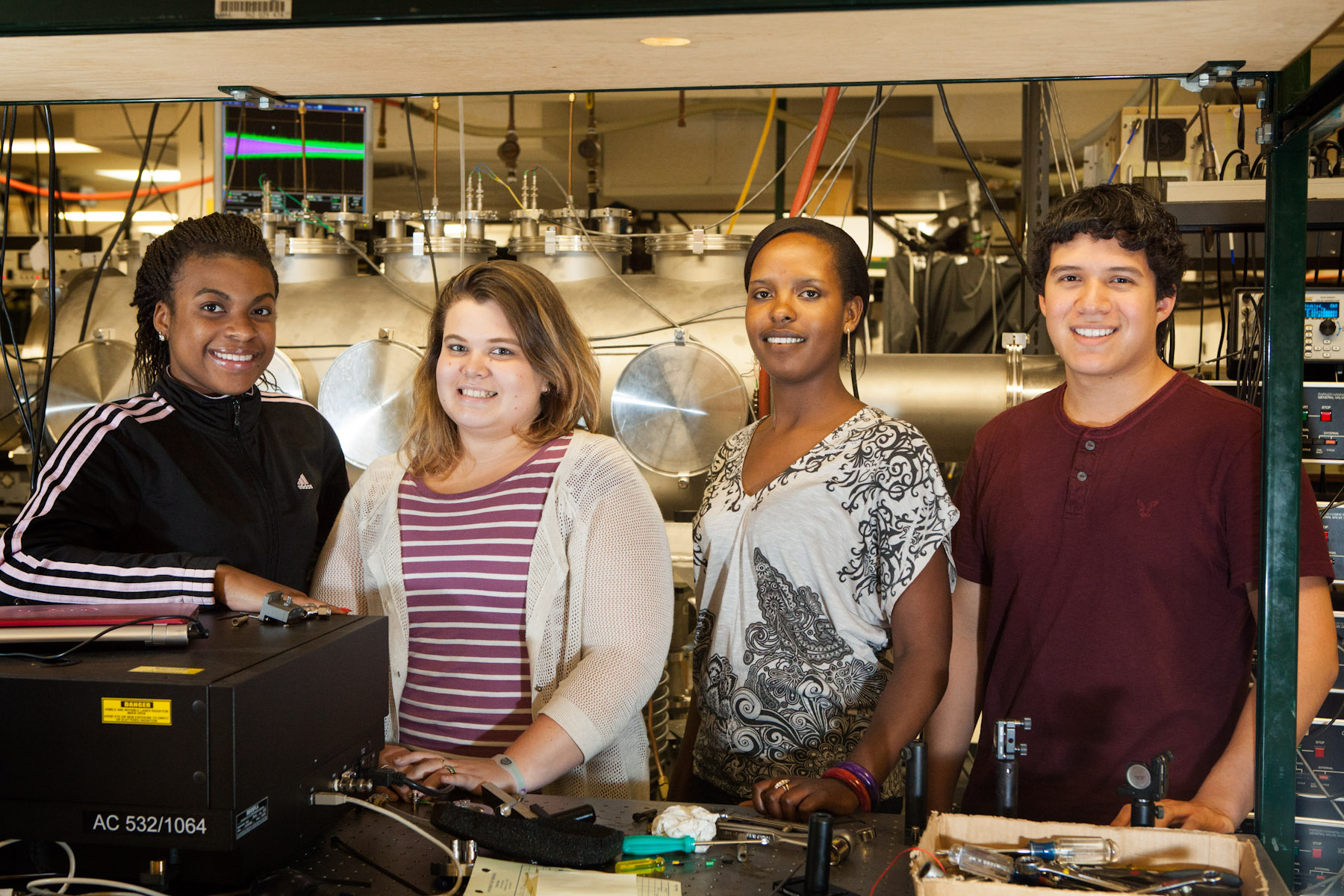 Chemists can spend entire careers in search of new molecules in space; on average, only about four or five interstellar molecules are discovered worldwide each year.

Recently, a team of undergraduate students from four universities visiting the University of Virginia to take part in a special eight-week summer research program for minority students made one of those rare discoveries. It's called cyanomethanimine, and is considered a precursor molecule for RNA, a key building block for the development of life on this planet – and possibly elsewhere in the universe.

The students conducted experiments in the astrochemistry lab of chemist Brooks Pate of U.Va.'s College of Arts & Sciences and used data from the National Radio Astronomy Observatory's Green Bank Telescope in Green Bank, W.Va., to verify their finding.

"This is a pretty special discovery and proves that early-career students can do remarkable research," said Pate, one of a team of program mentors that included U.Va. astronomy professor Ed Murphy and National Radio Astronomy Observatory scientist Anthony Remijan.

The students participated in the Virginia-North Carolina Alliance for Minority Participation, a summer program funded by the National Science Foundation to encourage research opportunities for underrepresented students in the "STEM" fields – science, technology, engineering and math.

This summer, 11 students came to U.Va. and participated in the total program, working in four disciplines – astrochemistry, biology, chemistry and systems engineering.

"When I came here I was expecting to do regular chemistry," Nyiramahirwe said. "But we got to do advanced work that really challenged us."

Murphy, Pate, Remijan and graduate student mentors challenged the students to go far beyond basic chemistry – to attempt a new understanding of the chemistry of the universe, a field of science that is a strength at U.Va. and NRAO.

What they didn't necessarily expect the students to do was produce a new interstellar molecule identification within such a short period of time. But when the students did – just three weeks into the program – the mentors pushed them to prove it.

The students did so by looking for the chemical signature of the molecule in radio astronomy data. Once they did that, they had all the verification they needed – and had indeed found in space the molecule cyanomethanimine.

"It's exciting to know we are a part of this," Sciortino said. "It's amazing."

The team applied for, and was granted, additional telescope time from NRAO at Green Bank to conduct further experiments using additional frequencies.

"Not many people get to go to Green Bank," noted Kennedy, "but we did!"

The team presented their findings at the conclusion of the program last Friday to faculty and students affiliated with the U.Va.-N.C. Alliance, and to NRAO director Tony Beasley.

Pate and Remijan intend to publish a paper on the finding, with the students as co-authors.

"It's been a really amazing experience," Sciortino said. "We've learned so much about the chemical environment, and it will be really useful for other chemistry courses and will look great on our resumes."

Sciortino said she is now considering graduate school, having had her "eyes opened."

"I want to further educate myself," she said. "I used to think that a bachelor's degree was enough, just to get a job, but now I realize the possibilities."

The other students also are thinking about graduate school, though Johnson has her sights set on medical school. Vasquez, the biology major, is now considering studying astrobiology.

Which is the point of the program – to bring underrepresented students from generally smaller institutions to U.Va., a major research university, to conduct hands-on research in state-of-the art laboratories, and to, hopefully, go on to careers in science or science-related fields.

U.Va. is the lead school in the Va.-N.C. Alliance and partners with seven other institutions in the two states. The purpose is to recruit and retain more students in the STEM fields.

In addition to support from NRAO, the Va.-N.C. Alliance, and the U.Va. Department of Chemistry, the students were supported by a grant from the Jefferson Trust Foundation.

"This exciting discovery illustrates the significant role of partnerships with national labs and facilities in the effort to broaden participation of underrepresented minorities in the sciences," said the alliance's program director, Kristin Morgan of U.Va.'s Office of the Vice President and Chief Officer for Diversity and Equity.