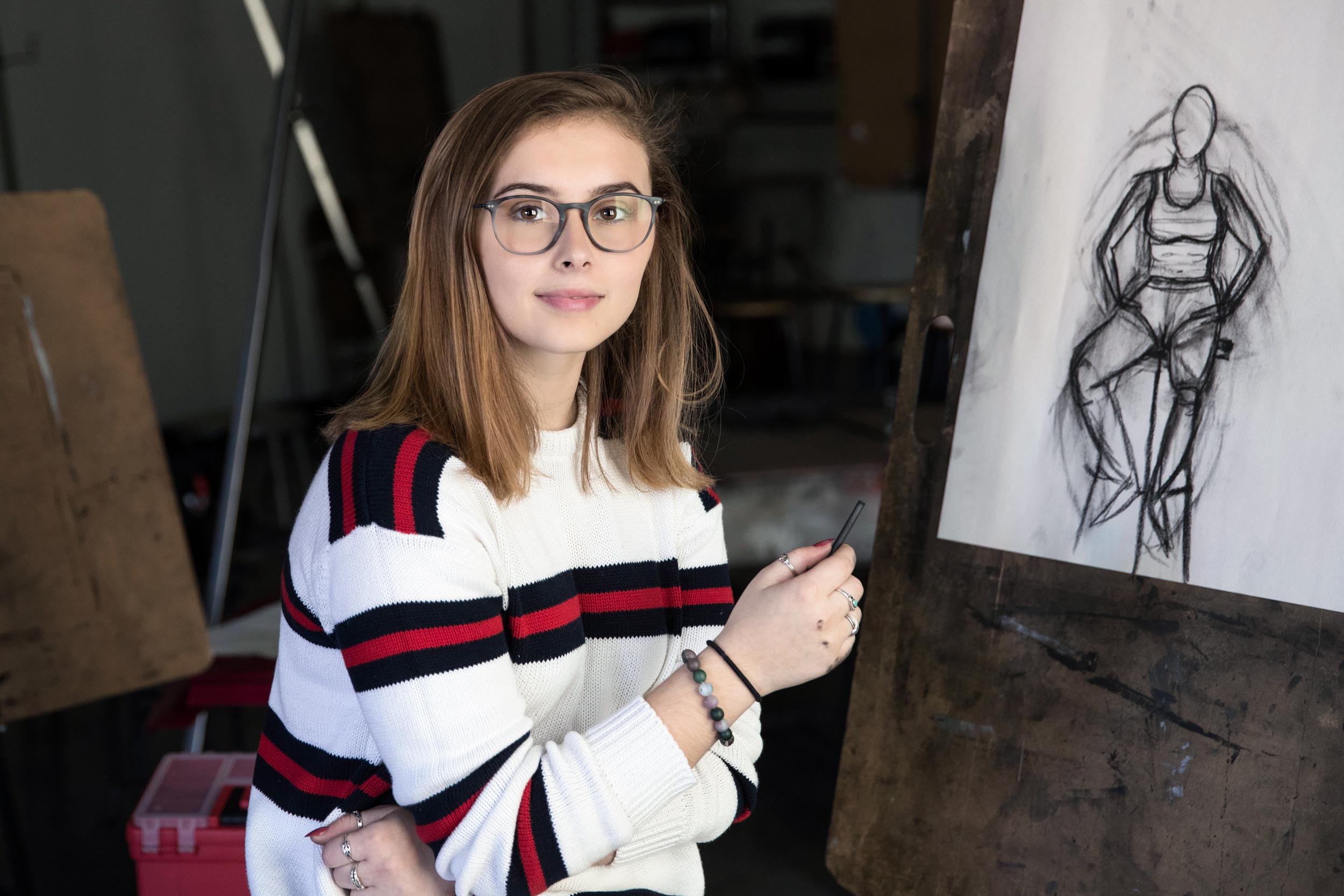 When Emma Hitchcock heard her name called last spring at a local entrepreneurial pitch competition, she was momentarily shocked.

She and Zadie Lacy, co-founders of their organization, were both high school students at the time and had tempered their expectations when they entered the all-comers competition, part of the TomTom Founders Festival that takes place in Charlottesville each spring. Mostly, they were hoping to get advice from other entrepreneurs and maybe recruit a few volunteers for their fledgling nonprofit, Art for the Heart, which provides art workshops for the homeless.

To their surprise, the young duo won the top prize in the social innovation category and earned a spot in the University of Virginia’s startup incubator, the W.L. Lyons Brown III Innovation Laboratory, or iLab.

“It really validated all of the work we had done so far, and gave us a boost of enthusiasm for the project,” said Hitchcock, now a first-year student at the University. “Before joining the iLab, we were not sure if we would be able to continue.”

Hitchcock and Lacy started Art for the Heart with their peers Max Beers and Elise Rebellato during their senior year of high school in Charlottesville last year, when all were enrolled in NewGen Peacebuilders, a youth education program that encourages young people to drive positive change in their communities. Hitchcock graduated from Tandem Friends School; Lacy from Monticello High School.

Since then, Hitchcock and Lacy have conducted several winter and summer art workshops at The Haven, a homeless shelter in downtown Charlottesville. This summer, they ran a five-week series with workshops every Friday morning focusing on painting, drawing or jewelry-making, which has proven very popular.

“Many people want to make bracelets for their children, or to give as gifts,” Hitchcock said.

Regardless of what the residents and visitors are working on, Hitchcock and Lacy provide supplies, some instruction and a listening ear.

“Art can be a basis for conversation, making it easier to talk to someone as you are working on something,” Hitchcock said. “The social norm is to ignore these people, to pass them by without acknowledging them. … They are longing for that human connection, and hearing about their experiences firsthand, and seeing how smart and creative and talented they are, has been powerful and eye-opening.”

It took a little time for their venture to gain traction, Hitchcock said.

“Understandably, many in the homeless community are not quick to trust someone, because they have so many people who are there one week and gone the next,” she said.

However, as Hitchcock and Lacy kept showing up, they gained an eager and consistent audience, often about 15 to 20 people in each workshop. Many were regulars, returning week after week and building relationships that, Hitchcock said, offered their own reward.

“We still have relationships with some people that we worked with more regularly,” she said.

They are currently planning a new series of workshops for December, when Lacy, now a freshman at the University of Mary Washington, will be home for the holiday break.

In the meantime, both students are fundraising and continuing the work they started in the iLab this summer, where they developed the business, operations and marketing support necessary to turn their high school project into a longer-term venture.

The iLab, which welcomed 23 ventures to its summer incubator, provides grant funding, networking opportunities, mentorship and pro bono legal advice. Hitchcock and Lacy spent at least six hours there every weekday, talking to mentors and other entrepreneurs and working on their website, logo, email marketing, budgeting and other logistics.

“It was so helpful,” Hitchcock said. “We had amazing mentors, learned how to network and talk to people about what we were doing, and learned practical details like how to file taxes as a nonprofit.”

One of their mentors was Debbie White, the director of operations at the Batten Institute for Entrepreneurship and Innovation. Coincidentally, White has a background in art and had conducted art therapy sessions with artists with disabilities. She was very impressed with Art for the Heart.

“I think it is an amazing idea,” White said. “At Darden and in the iLab, we often talk about creating ventures that do good and create good in the world. They are a shining example of that.”

White helped Hitchcock and Lacy organize a fall exhibition of participants’ work through the TomTom Festival, and she continues to advise them as they plan their winter schedule.

“They have done a fantastic job of growing their venture, and they are very dedicated to it, even when they are both making a big transition to college,” she said.

“It’s so fun, and I really love it,” Hitchcock said. “I am hoping to get some of the mentors involved with Art for the Heart.”

She has several other dreams for the organization this year, including partnering with other shelters and organizations that serve the homeless community, reaching out to art supply stores, recruiting more volunteers and displaying participants’ work around the city.

“It’s something Zadie and I are really passionate about, and we want to make it the best it can be,” she said.