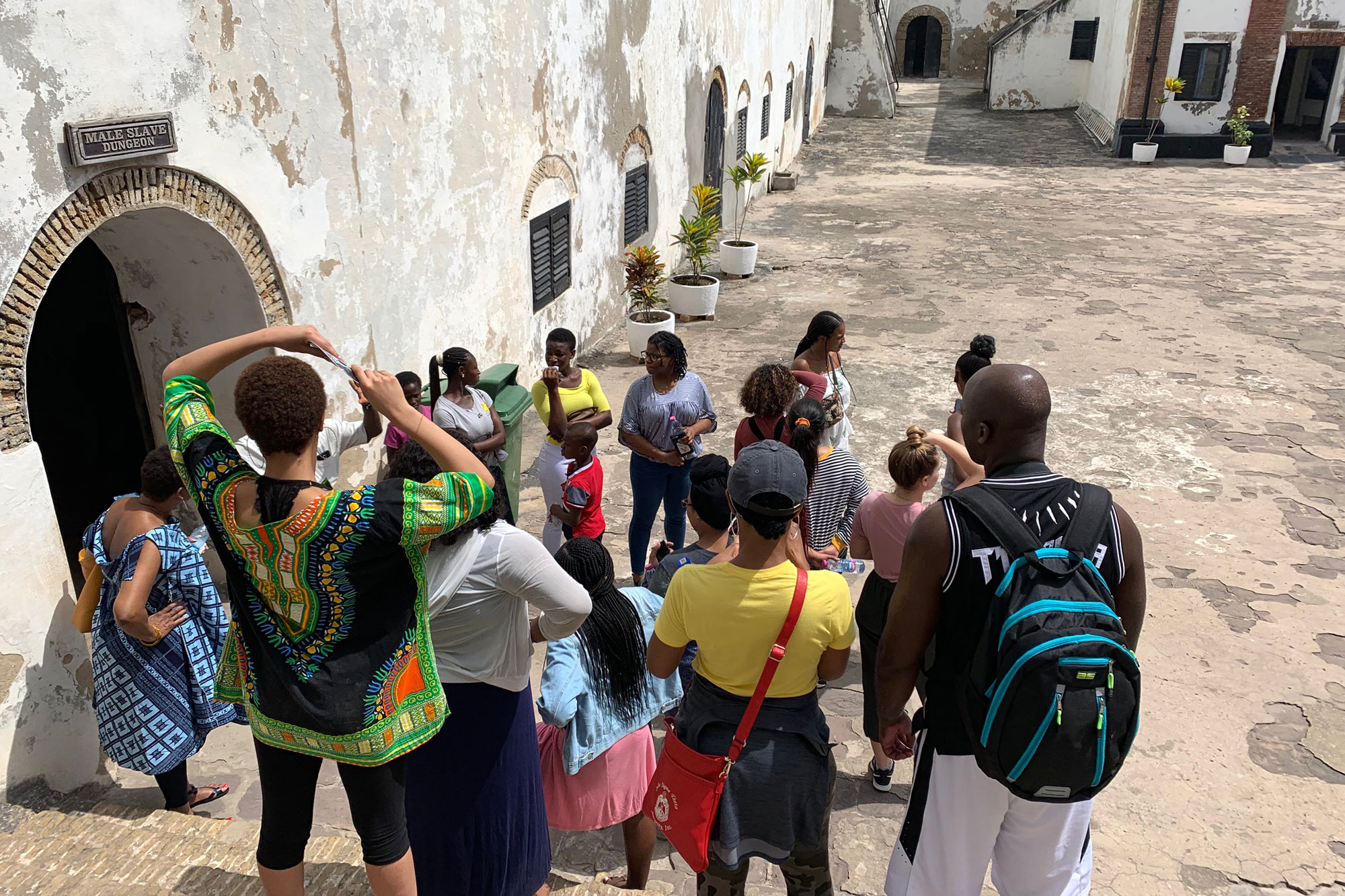 The University of Virginia’s study-abroad January term courses that just wrapped up were anything but a walk on the beach – even if some of them did visit one.

This year, 377 students traveled to all corners of the globe for international J-term courses, which ran for about two weeks during the winter break. (Another 627 took courses in Charlottesville.) They studied business topics in McIntire School of Commerce courses that took them to Asia, Argentina and Australia, and health care issues and emergency preparedness in the Caribbean. Other students learned about the history of diverse cultures in India or explored Tuscany’s culture. Two courses used the work of authors to reveal the worlds they describe, specifically Victor Hugo’s Paris and Yaa Gyasi’s Ghana.

Gyasi’s 2016 New York Times’ bestselling book, “Homegoing,” provided the framework for the course “A Tour of the Book: ‘Homegoing’ and the Challenge of Diasporas.” The historical novel follows the descendants of two sisters from Ghana in the 17th century, with one staying in Ghana and the other captured and taken to America in the slave trade. Students visited some of the sites central to the story, including slavery forts, and heard from Ghanaian scholars about what one of the course’s teachers, English professor Deborah McDowell, called the country’s “rich and complex history.”

Third-year student Keiara Price, double-majoring in history and in African-American and African studies, said she took the course hoping to understand “the ways in which the narrative surrounding the transatlantic slave trade varies based on location in the African diaspora.”

Price, who is president of the Black Student Alliance and a fellow in the Meriwether Lewis Institute for Citizen Leadership, said, “I learned that while the concept of blackness can be unifying, it is not universal. The African diaspora and the issues that exist within it require a deep intellectual study of narrative, geography and what it means to be a product of colonialism, imperialism and capitalism.”

“While Ghana’s history cannot be reduced to the Atlantic slave trade, this episode animates Gyasi’s novel,” said McDowell, who directs UVA’s Carter G. Woodson Institute of African-American and African Studies. “Being able to visit the sites and scenes she references in the novel – for example, the slave forts at Cape Coast and Elmina – enhances the course for our students, all of whom described having a deeply emotional reaction to being in the dank, dark dungeons into which their ancestors were stacked by the hundreds on top of each other.”

McDowell team-taught the course with assistant professor Kwame Otu, who grew up in Ghana.

“Hailing from Ghana, which I regard as home, I always revisit what it means to go home, as I see our students begin to explore the meanings of home and diaspora on more complicated levels, drawing on their experiences in Ghana and the U.S.,” he said. “Trudging through the castles and the paths historically walked by bondspeople during slavery, both students and the professors bear witness to landscapes leftover from a past whose effects endure in the present.”

The course not only focused on history, but also challenged students to engage with the African country in today’s world. Otu said the trip allowed “our students to contend with how contemporary Ghanaians, who reside in the environments in close proximity to the infrastructures of slavery, have perceptions of home, slavery and diaspora, quite different from what we are familiar with here in the U.S.”

Another course – the first study-abroad J-term course offered by the Bachelor of Interdisciplinary Studies program in the School of Continuing and Professional Studies – took students to “Victor Hugo’s Paris.” Hugo, the author of “Les Misérables,” the renowned novel made into several films and musicals, also was an artist and activist who worked to abolish capital punishment and to preserve historic architecture, including the medieval Notre-Dame Cathedral. 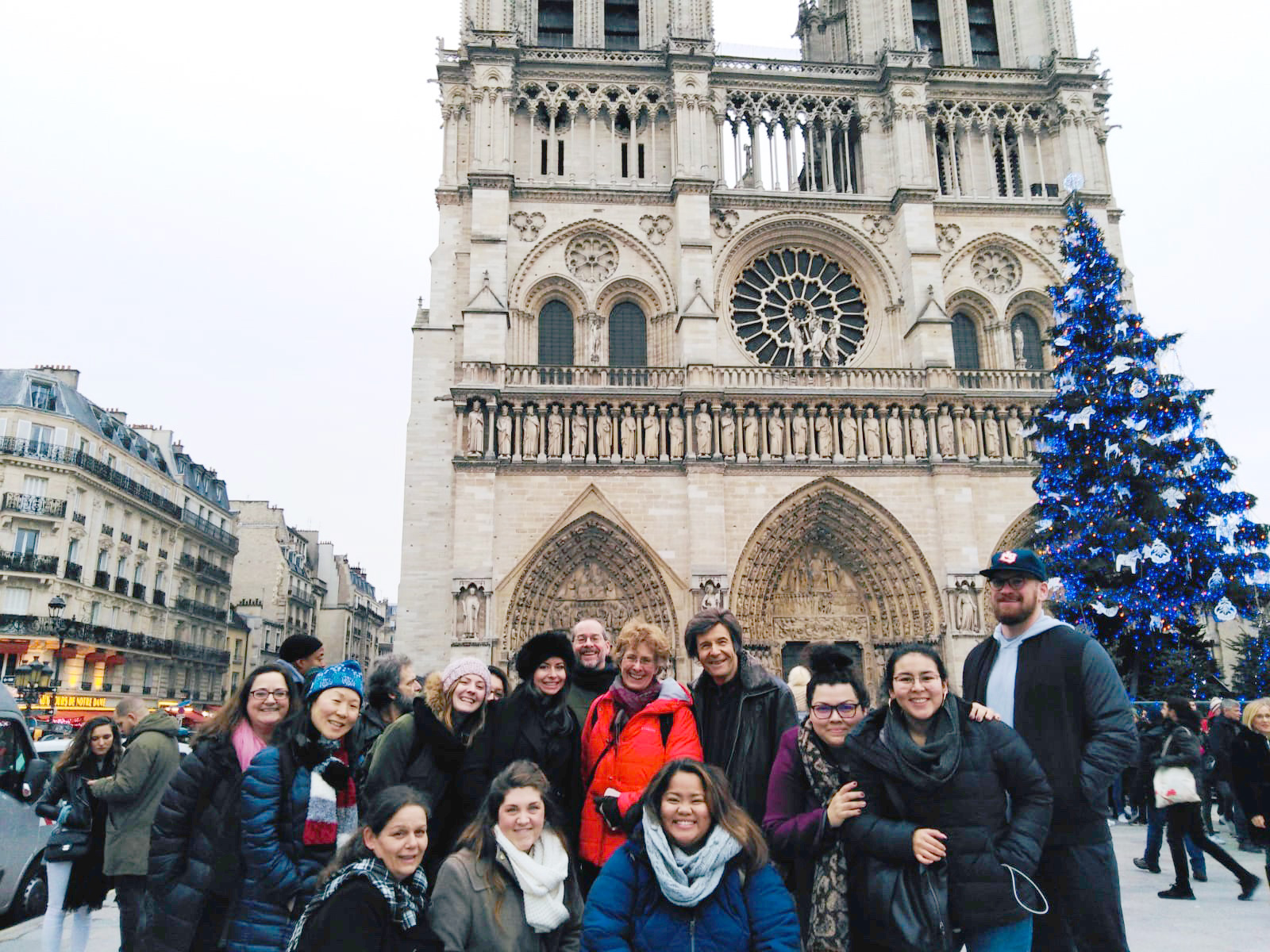 Brittany Eddy, one of the 13 BIS students and one undergraduate who took the class, said, “I learned about the impact that Hugo had on Paris, but also the impact that Paris had on Hugo. Nineteenth-century Paris needed someone like Hugo to stand up and fight for social justice, to give a voice to the voiceless.”

In her third year of the BIS program’s liberal arts concentration, Eddy – a Charlottesville native who’s currently working full-time for an investment company – said this was her first time traveling internationally.

Hugo expert Marva Barnett, a UVA professor emeritus, taught the course and said a half-dozen French scholars “generously participated, giving us personal tours of the Hugos’ apartment in the Place des Vosges and showing us Hugo’s original artwork and letters, for example.”

She found the nontraditional students brought great motivation and energy to the subject.

“The students, admittedly drawn to the course by the City of Lights, were open to Hugo’s genius and found multiple personal resonances in his work. We took full advantage of the city, visiting several sites a day, seeing how Hugo saved Notre-Dame Cathedral and other medieval buildings through his advocacy and how he wove the city into such epics as ‘Les Misérables.’”

Exploring unusual aspects and the rich history of a locale on another continent also featured in the course “India in Global History,” taught for the second time by professors Mehr Farooqi and Richard Cohen in the Department of Middle Eastern & South Asian Languages and Cultures.

“Our goal was to introduce students to the premodern global world and the diversity it brought to the coastal state of Kerala in South India,” Farooqi said. “We wanted students to experience a culture that was historically rich with a variety of traditions.”

For millennia, the Malabar Coast on the southwestern shoreline of India was directly in the sights, as the program brochure says, of Arabs, Africans and Europeans for the resources it offered, including exotic spices, cashews, rubber and cotton textiles.

Farooqi added, “Kerala is the only state in India with a communist party forming the government. The students learned how it is possible to have a compromise between communism and democracy.

“The course was successful beyond our expectations. Students bonded very well and enjoyed immersive learning,” she said. 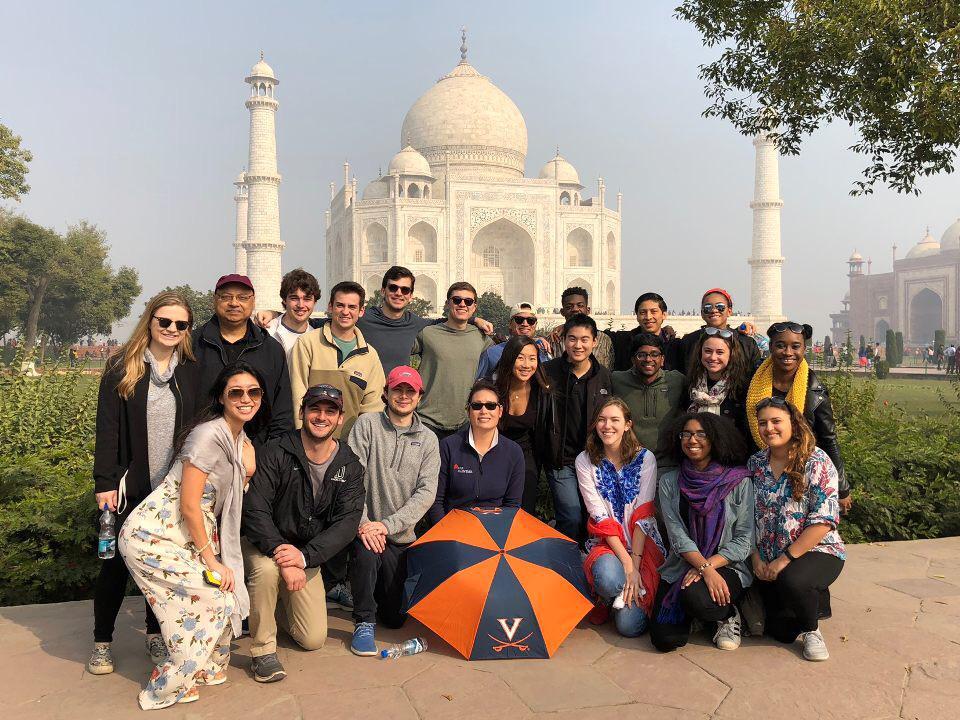 In contrast, students in a McIntire School of Commerce course visited two well-known cities, Delhi and Mumbai, as well as Dubai in the United Arab Emirates, in professor Suprateek  Sarker’s course on “Innovation and Consumption.” Course objectives focused on developing a better understanding of the global business environment and analyzing economic and non-economic factors that affect innovations and consumption in different national environments.

“In India, we saw frugal innovation in action; in U.A.E., the innovation initiatives we saw were futuristic, grand and with no obvious financial constraints,” Sarker said.

Adam Koeppel, a fourth-year student in the Frank Batten School of Public Policy and Leadership, said, “It was very cool to see some of the Indian factories that manufacture clothing for major Western companies such as Harley Davidson and Timberland.

“As a Westerner traveling to Asia or the U.A.E. for business, the biggest obstacle will be assimilating to the cultural differences within the workplace, not necessarily the work itself. One of the most important things I learned from this experience is that around the world, culture plays a vital role in the business place.”

What it Means to Be a Cavalier Baseball Player END_OF_DOCUMENT_TOKEN_TO_BE_REPLACED