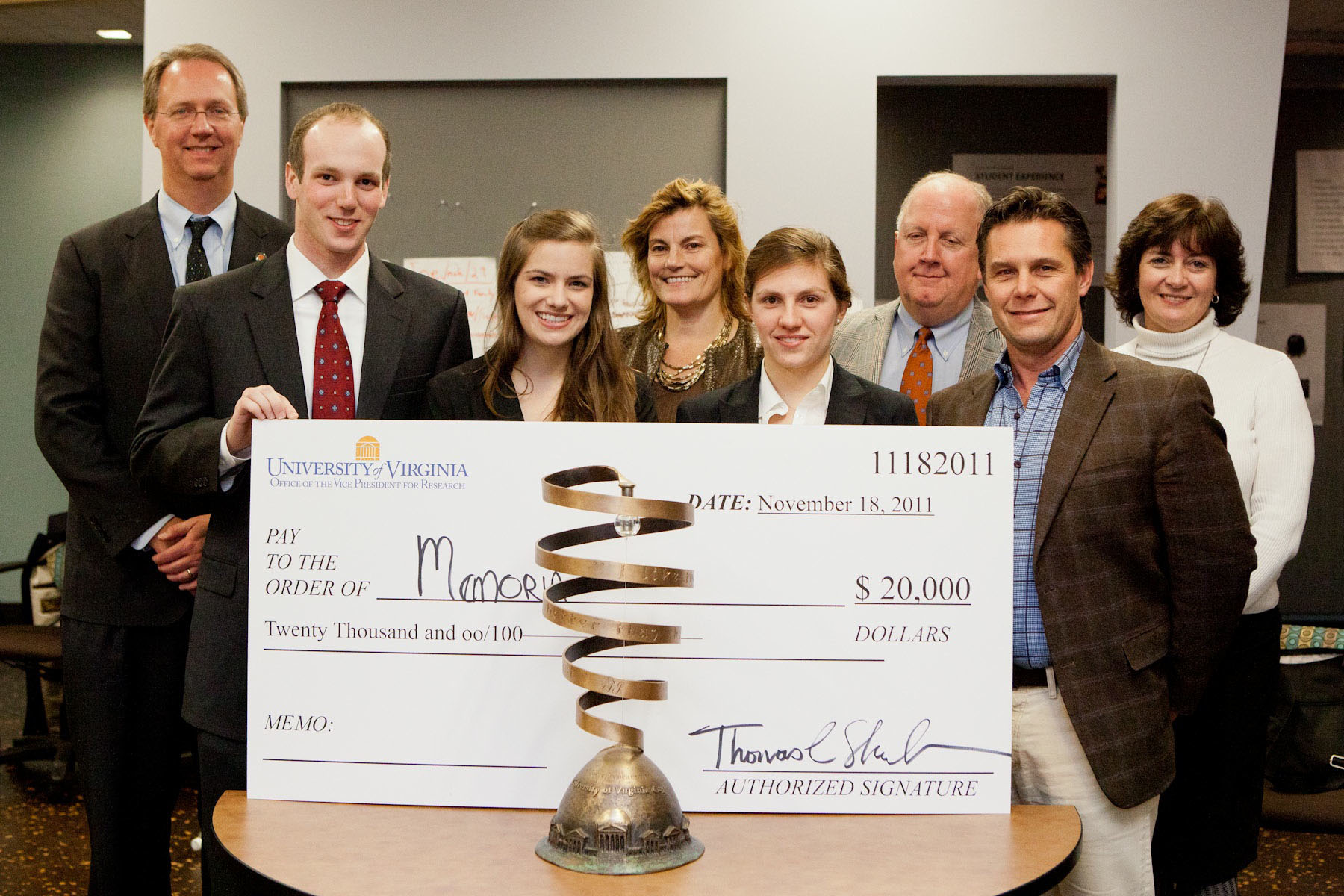 Listen to the UVA Today Radio Show report on this story by Brevy Cannon:


November 21, 2011 — The winning teams of this year's University of Virginia Entrepreneurship Cup had one thing in common. Each envisioned a business that could solve a problem: a new online way to memorialize deceased loved ones; a way to charge a cell phone by simply walking around; a way to clean polluted water by harnessing solar energy with a portable solar still; even a way to use smartphones to collectively vote yea or nay to songs on a playlist.

Those business concepts moved one step closer to reality on Friday, when they won the four top spots in the 2011 E-Cup, along with shares of $40,000 in prize money.

That team – Virginia Robinson and Tyler Durham, fourth-years in the McIntire School of Commerce, and Celine Heckel-Jones, a fourth-year civil engineering major in the School of Engineering and Applied Science – took home $20,000. They will represent U.Va. in the Commonwealth Opportunity Cup, a statewide business plan competition to be held in the spring at the Virginia State Capitol in Richmond and attended by Gov. Robert F. McDonnell.

Friday's event, held at Darden's i.Lab, was the culmination of a University-wide competition for the most innovative and feasible business idea. The contest began in October with a field of 172 proposals created by more than 300 students from eight of U.Va.'s 11 schools. The seven finalist teams each won an earlier round of preliminary school-by-school contests, held Nov. 2-11.

This year, for the first time, the preliminary competitions included a track dedicated to social entrepreneurship – businesses focused on furthering social or environmental goals – hosted by U.Va.'s Student Entrepreneurs for Economic Development, or SEED.

The seven finalist teams included students from the Curry School of Education, the College of Arts & Sciences, and the Darden, McIntire, Law and Engineering schools.

Memoria, the winning concept, doesn't intend to replace newspaper obituaries, Robinson explained. Unlike today's newspaper-based obituaries, it would offer features like live streaming video, which could be used for personal reflections or a message from the family; a social media sync with Facebook; and an attractive, ad-free website that lives permanently online. While obituaries are based on a mass-communication model, Memoria will allow more targeted distribution of messages to social networks and more interactivity.

The idea that led to Memoria came to Robinson after a high school friend died four years ago. She and others shared their memories and reflections, grief and sadness on Facebook. But something was missing.

"When someone passes away and people write on their Facebook wall, it can feel odd and impersonal because the person can't write back," Durham said. "I think people are looking for a different outlet to express their feelings for that person."

"We think there should be a separate forum for commemorating someone and their legacy," Robinson said. "Facebook is about the person, and Memoria is about their legacy."

Runner-up Powersole – a shoe that generates power by converting the kinetic energy generated by walking into electricity to charge electronic devices like cell phones through a port on the side of the shoe sole – won the new social entrepreneurship track of preliminary competition. It took a prize of $10,000.

Powersole inventor Joseph Linzon, a 17-year-old first-year student in the College who plans to apply to the McIntire School, made arguably the most dramatic demonstration of the competition. As he stood before the judges, he plugged his iPhone into a USB port on the side of the sole of his Powersole prototype to show his phone actually charging.

Linzon, from Toronto, was inspired to create the Powersole after visiting Peru, where he witnessed the hurdles created by lack of access to electricity – and especially the challenge of charging cell phones, which provide a vital communication link and business tool for millions.

By harnessing the motion of routine daily walking, Powersole can "empower the powerless, literally, one step at a time," he said.

Linzon has filed a provisional patent for his concept. To produce the shoe, he plans to partner with an existing footwear maker like Ecco, Nike or Wolverine, and has already been in contact with Nike about licensing the technology.

One of the two $5,000 honorable mention prizes went to a Law School team for its "partially evacuated solar still," which harnesses evaporation and condensation driven by the daily cycle of rising and falling temperatures to convert salt water or polluted fresh water into potable water.

The trio of law students – Justin Kanter, Nathan Phalen and Joshua Tully – envision their still primarily serving sub-Saharan Africa, where millions lack convenient access to clean water and 4,000 children die of waterborne illnesses each day, Tully said. They plan to continue developing the still with help from James A. Smith, a professor of civil and environmental engineering who has worked for decades on water filtration solutions for the developing world. "He's excited about our still," Tully said.

The other honorable mention went to "Bump It," a smartphone application billed as "The Jukebox of the 21st Century," which will allow users to vote to add (or stop) songs on the playlist at bars, weddings and other events. The Bump It team included students Aubrey Mignone from Curry; Hoyt Whelchel from the College; and Ryan Stevens and Emery Waddell from McIntire.

The winning team's name, Memoria, will be engraved on a light polymer ball (with an embedded magnet) that levitates within the U.Va. E-Cup trophy's spiraling band of bronze, which itself is engraved with a quote from University founder Thomas Jefferson: "I like the dreams of the future better than the history of the past."

The trophy will reside in the McIntire School – home of the winning team – until next year's E-Cup.

This year's E-Cup judges were Reenst Lesemann, CEO of Columbia Power and a Darden graduate; Lyons Brown, founder and CEO of Altamar Brands, a Darden graduate and a trustee of the Darden Foundation; and Scott Horner, managing director at event sponsor Third Security.

"All of the presentations were excellent, on par with many of the business pitches seeking venture funding from Third Security that I see in the course of my job," Horner said. "This is one of my favorite events of the year."

The E-Cup is "the coolest thing we do at U.Va. related to innovation," said Mark Crowell, executive director and associate vice president for innovation partnerships and commercialization. "I firmly believe, as President Sullivan says, that we must innovate our way out of this current economic crisis, and this is the way to do it."