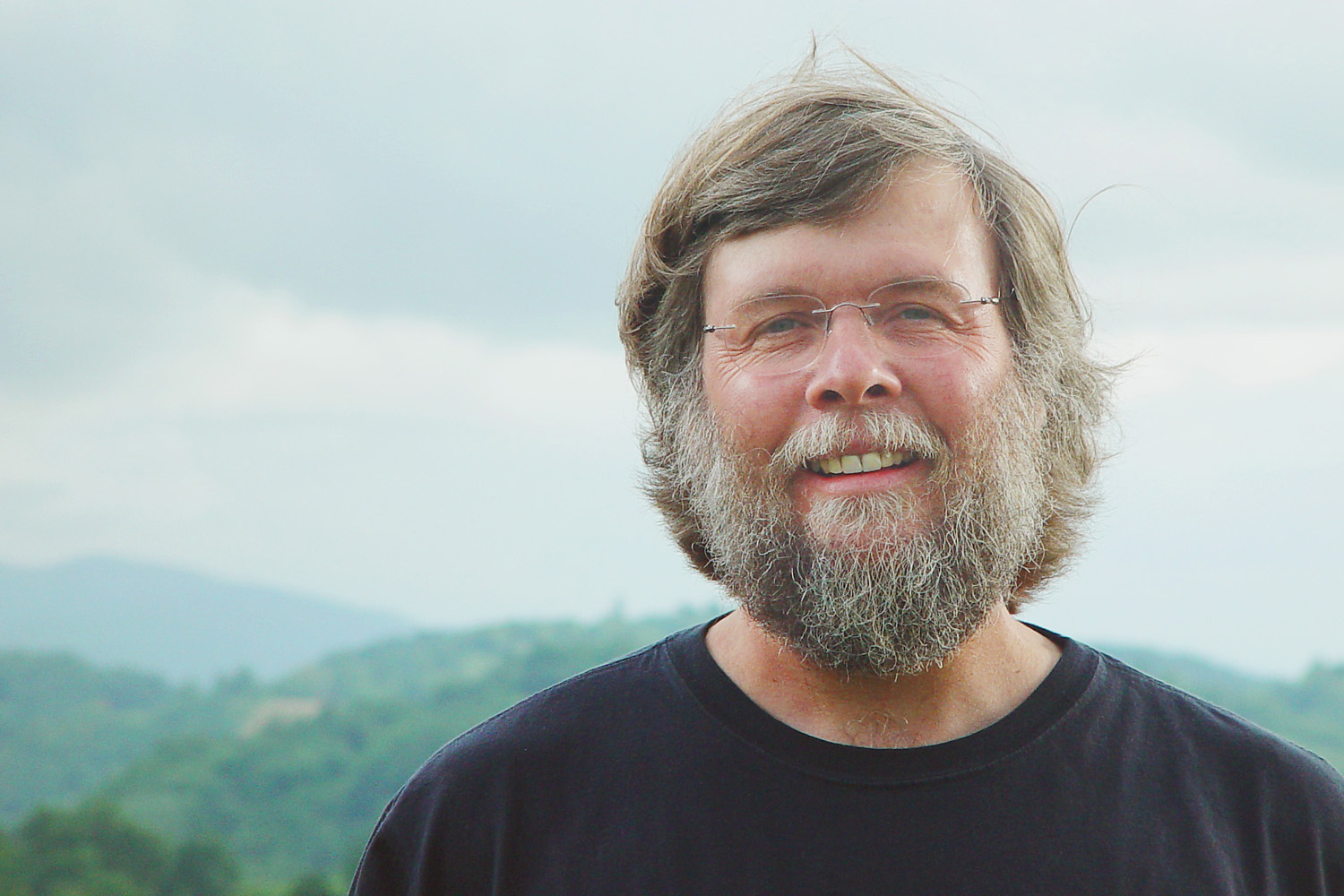 Rick Webb/Photo courtesy of the Dept. of Environmental Sciences

May 3, 2007 -- Rick Webb, a senior scientist in the Department of Environmental Sciences who has studied the various issues involving the possible use of wind energy in Virginia, is a member of a National Research Council committee that yesterday released its findings to Congress and the public after more than a year of studying the environmental impacts of wind energy projects in the highlands of the Mid-Atlantic region (West Virginia, Virginia, Maryland and Pennsylvania).

Webb’s main research at U.Va. is on the effects of air pollution on forested watersheds in the central Appalachians. Recently he co-authored a Landscape Classification System for Wind Project Siting in Virginia, and he co-maintains the Virginia Wind Web site (www.VaWind.org), which addresses the need for environmental assessment prior to wind energy development.
At the time of yesterday’s NRC press release announcing completion of the report, Webb made a personal statement regarding wind energy in the highlands of Virginia: “After having participated in this committee I remain skeptical about the potential benefits of wind energy development on Appalachian ridges. It carries great risk of environmental harm and little potential for benefits. I am very much concerned about efforts to convince the public and lawmakers that Appalachian wind development is a meaningful part of the solution to our energy and environmental problems, when really, it is only a distraction.”

The press release issued May 3 by the National Research Council follows.

USE OF WIND ENERGY IN U.S. GROWING, BUT PLANNING AND GUIDELINES ARE LACKING;
NEW REPORT EXAMINES WIND ENERGY'S IMPACTS ON EMISSIONS, WILDLIFE, AND HUMANS

WASHINGTON — Although the use of wind energy to generate electricity is increasing rapidly in the United States, government guidance to help communities and developers evaluate and plan proposed wind-energy projects is lacking, says a new congressionally mandated report from the National Research Council.  To inform the development of guidelines, the report offers an analysis of the environmental benefits and drawbacks of wind energy, along with an evaluation guide to aid decision-making about projects.  As a case study, the committee that wrote the report looked at the mid-Atlantic highlands, a mountainous area that spans parts of West Virginia, Virginia, Maryland, and Pennsylvania.  The report does not examine the impact of offshore wind-energy projects.

Currently, federal regulation of wind projects on private land is minimal, the report observes.  And although some states have developed guidelines, wind energy is such a recent addition to the energy mix in most areas -- the nation's wind-energy capacity more than quadrupled between 2000 and 2006 -- that most states are relatively inexperienced at planning and regulation.  Despite the growth in its use, wind energy still generates less than 1 percent of the nation's electricity.  Some national-level policies to enhance the benefits of wind energy and minimize its harms would help guide state and local regulatory efforts, the report says.


Impacts on CO2 and Other Pollutants

A primary benefit of using wind to generate electricity is that it produces no carbon dioxide (CO2), a major greenhouse gas, or any other air pollutant.  Based on U.S. Department of Energy projections for wind-energy development in the United States, the committee estimated that by 2020, wind energy will offset approximately 4.5 percent of the carbon dioxide that would otherwise be emitted by other electricity sources.  In 2005, electricity generation accounted for 39 percent of the nation's total CO2 emissions.

The committee concluded that use of wind energy to generate electricity probably would not significantly reduce emissions of two other pollutants, sulfur dioxide and nitrogen oxides, because current and expected regulations of these are largely based on cap-and-trade programs.  The degree to which emissions would be further reduced through special provisions to encourage wind-energy use --  such as set-asides, in which a percentage of emissions allowed under the cap are retired to the extent they can be offset by wind energy -- is uncertain, the committee added.

In the mid-Atlantic region, wind energy will likely contribute a lower proportion of electricity generation than it will in the United States overall, the report says; compared to other areas, a smaller portion of the region has strong, relatively steady winds.

Wind facilities can have certain adverse environmental effects on a local or regional level, by damaging habitat and killing birds and bats that fly into turbines.  Among birds, the most frequent turbine fatalities are nocturnal, migrating songbirds, probably because of their abundance, the report says.  However, the committee saw no evidence that fatalities from existing wind facilities are causing measurable changes in bird populations in the United States.  A possible exception is deaths among birds of prey, such as eagles and hawks, near Altamont Pass, Calif. -- a facility with older, smaller turbines that appear more apt to kill such birds than newer turbines are.

Too little information is available to reliably predict how proposed new wind projects in the mid-Atlantic highlands would affect bird populations, the report says.  As for bats, turbines placed on ridges -- as many are in the mid-Atlantic region -- appear more likely to kill them than turbines sited elsewhere.  In fact, preliminary information indicates that in the mid-Atlantic highlands more bats are killed than expected based on experience with other regions, the committee said.  Although scarce data make it hard to say how these deaths affect overall bat populations, the possibility of population effects is significant, especially if more turbines are added, given a general decline in several species of bats in the eastern United States.

Studies to evaluate possible ecological impacts should be conducted prior to choosing sites for wind facilities, the committee said, and follow-up studies should be conducted to measure actual effects.  Additional basic research also is needed to help assess the short- and long-term impacts of these facilities on species at risk.

A common objection to proposed wind projects is that they will have a negative aesthetic impact.  The report outlines a process to help communities and developers assess a project's likely aesthetic effects, and suggests ways to minimize them -- for example, by using uniform types and sizes of turbines, and by ensuring that each region retains some undeveloped scenic vistas.  The report also offers questions to ask, to help determine whether the aesthetic impact might be great enough to render a project unacceptable.

Wind projects also can be disruptive because of noise and shadow flicker, a strobelike effect caused by rotating turbine blades.  The report recommends that noise surveys be conducted before a project is sited, and that processes be set up to respond to noise complaints.  Shadow flicker has generally not been a problem at wind facilities in North America, the report says; new turbines can be located so that their shadow paths avoid residences, or operations can be halted during times when troublesome flicker occurs.

The report also considers beneficial and adverse economic effects on local areas -- such as effects on landowners, the regional economy, and local government revenues -- and recommends measures to anticipate and mitigate potential problems.  In addition, the report discusses possible electromagnetic interference with local installations such as radar.

Governments at the state and local levels should provide developers and the public with guidance to help them plan for wind-energy development, including guidance on procedures and information needs for assessing projects, the report says.  It also recommends that regulatory agencies adopt an evaluation guide to review proposed projects, and that governments work with each other and with organizations and developers to create guidelines for weighing projects' costs and benefits at scales ranging from local to national.