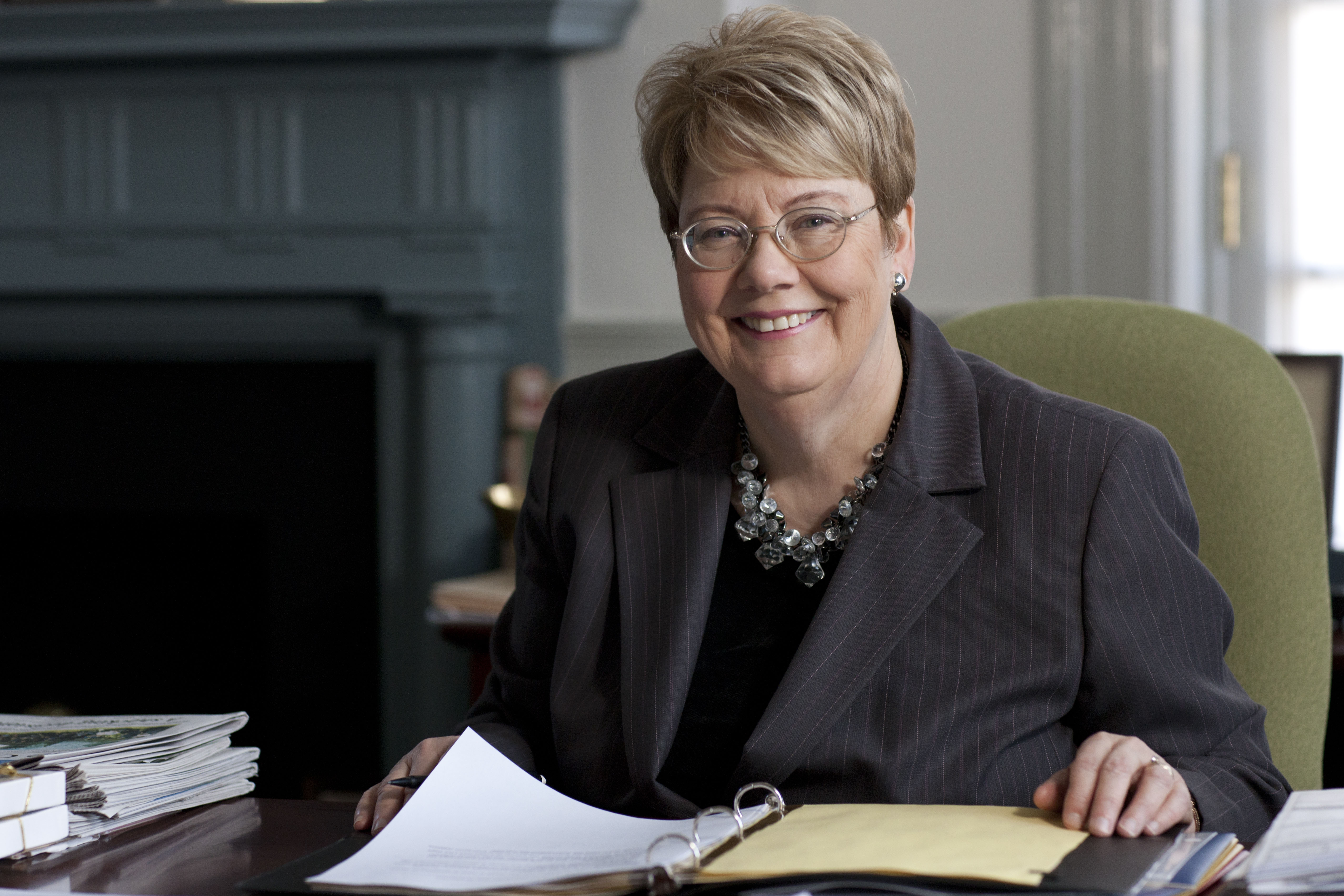 March 12, 2012 — The Virginia General Assembly's stalemate over the state's 2012-14 budget is another layer of uncertainty for the University of Virginia as it seeks to balance competing budget demands, including affordability, financial aid and attracting and retaining faculty.

In this Q&A adapted from the University of Virginia magazine, President Teresa A. Sullivan discusses the challenges ahead.

A: I can't tell you why the Commonwealth of Virginia has allowed this to happen. I can tell you that in North Carolina, there was a concerted effort to give strong support to their universities in the belief that would help their economy recover from the loss of tobacco, the loss of textiles, and the other blows that they had taken. And they do have some very fine universities as a result.

But the formation of [Virginia] Governor Robert McDonnell's Commission on Higher Education does seem to be a watershed moment in the following sense: It was a public affirmation that higher education is important to the Commonwealth, and that graduates with a college education are important to the future of Virginia's economy. I saw that as a very good sign. How soon that gets transferred into more support, or if it ever does, I'm not sure.

I think that looking at state support in terms of percentages is fundamentally misleading, so I don't like to talk percentages. We're about a $2.4 billion operation right now. A billion dollars of that is our hospital. No one expects our hospital to be funded by state appropriations.

In addition, our research support has grown. So if we criticize the legislature for a shrinking percentage every time we get a dollar of research support, that's not really fair to the General Assembly.

You need to compare apples to apples. I like the comparison of spending per in-state student because that is a fair comparison to make. Do I wish ours was higher? Yes, I do. We could do more if it were.

Q: Why does tuition continue to go up?

A: When we plan the operating budget for the Academic Division each year, we have two major sources of revenue. We have the state appropriation and we have tuition. So whenever we lose a dollar from the state, we're either going to have to tighten our belt further, or we'll have to raise tuition. So that's one of the reasons that tuition increases have been so regular; basically, you're substituting for the loss of income from the state. That's what you see happening in every state.

Q: As tuition rises, how much do you anticipate increasing support for U.Va.'s financial aid program, AccessUVa?

A: That's an important issue, because we do not want the University to be out of the reach of students who don't have the financial means that others have. AccessUVa is a very important program to us, and it is one of the signature financial aid programs of any public institution in the country. We do have to pay close attention to that, and how we can best continue to fund that. [The University hired a consultant last fall to study the long-term goals and financial stability of AccessUVa. The board also appointed a special seven-member committee, chaired by Vice Rector Mark Kington, to oversee the review.]

Q: What parts of the University's operations are paid for by tuition and the taxpayers? After that, how does everything else get paid for?

A: Any big university like this one has many sources of revenue coming in. We do get the state appropriation, so there's a lot of focus on that. We get more than $300 million a year in research money, which is very important. And we get tuition. We get money from a variety of sources, including philanthropy. All those things together are used to put together our budget.

So we're careful to reserve the heart of that budget, which is the money that we get from the state and the money that we get from the students, for the direct delivery of what is educationally important. That includes faculty salaries, but it's also things like the library, the technology that lets us all stay connected, running a first-rate admission office, placement services and student services, all of which are very important. Those things are legitimate expenditures for tuition and for the state appropriation.

Q: The Board of Visitors has approved increasing enrollment by an additional 1,500 students over the next five years. Why was this decision made?

A: Two important political pressures underlie this. One is that the governor, for good reasons, wishes to increase the number of Virginians with baccalaureate degrees by 100,000. And the second is that the legislators in Northern Virginia would very much like to have more places for their constituents at U.Va., and they are willing to cap our out-of-state enrollment if necessary to achieve that. Certainly, we want to avoid a cap. I think a cap is an intrusion on the prerogative of the Board of Visitors. I also think it's not healthy for the University.

By proposing the 1,500 increase over a long period of time, we're able to actually provide more seats for Virginians than that 25 percent cap [on out-of-state students] would have produced. You can see that it's a long, slow ramp-up.

We already have adequate residence halls, dining halls and recreational facilities to accommodate these students. We don't have adequate faculty and staff. That's why I said we would not do this unless the state provided the money to do it. If we can hire the additional faculty and staff, I believe the heart of the undergraduate experience will be the same. We may be able to, in fact, improve the undergraduate experience in some parts of the University where we haven't been able to hire faculty for a while.

Q: Can the University sustain its position in the U.S. News & World Report rankings? What are the biggest challenges in maintaining U.Va.'s status as a top public university?

U.S. News ranks heavily how much money you spend per student. If you are very efficient with your resources, it hurts you at U.S. News. Frankly, I don't think that's a good way to approach quality. To me, the most important part of quality is what kind of graduates are you producing, and who are the faculty who are helping you produce those graduates? If you look at those criteria, if you look at who we graduate and where they go, we're doing an excellent job. If I have a concern about the rankings in the future, it's having the resources to keep the excellent faculty we have here.

Q: How significant has the challenge of recruiting and retaining our faculty become?

A: Without having raises for faculty for the past three years, our competitive compensation has stagnated. That makes it pretty easy for a competing institution to come in and make a top-dollar offer to one of our great faculty members. We're asking a lot of loyalty from that faculty member to stay here when they're leaving money on the table. So that's certainly a risk.

Another problem when we don't have money to hire is that we can't bring in as many good young faculty members as we would like to. An important part of keeping an excellent teaching force is that you have experienced faculty, but you also need newer faculty members who don't have as much experience, but are very close to the cutting edge in their field. It's the interaction of having both kinds of faculty that makes for a great experience for the students.

Q: In light of the need for higher faculty compensation, some might argue that coaches of the University's higher-profile teams seem exceptionally well compensated. How does U.Va. fund coaches' salaries and athletics in general?

A: No state dollars go to athletics. There's no taxpayer money there, and there's no tuition money there. The athletics program exists because of philanthropic donations and fees of various kinds, including ticket fees. The athletics department has to balance its own budget, and it has to do it without subsidy from the central administration.

To have a competitive athletics program, you also are occupying a place in the market, and the market for coaches in some of the sports is very competitive. If U.Va. is going to be a player at the top level, then you have to pay to play. That's why some of those salaries are so large.

Q: You mentioned earlier that Princeton Review again ranked U.Va. the best value nationally among public colleges, an indication that the University is run extremely efficiently. Is it safe to assume that there's very little room to reduce spending?

A: There will always be examples of things, like utility use, that we look at to make sure that we're being as cost-effective as possible. But in terms of big areas where there are obvious cost savings, I don't think we have those, because there's been careful attention to cost-control here for a long time. And we're pretty lean. Indeed, for the quality of student experience we provide, I worry about getting very much leaner and still having students get the same quality experience.

Q: What areas of spending need to be protected to ensure that the students are getting the best education here?

Another area is the library. It's very important to keep library materials here and accessible, even for scholars who are in fairly esoteric areas. There's a reason that the heart of the Academical Village, the Rotunda, was the library in Jefferson's plan. You can't deliver a state-of-the-art education these days without adequate technology and without an adequate library.

Q: How does the endowment, currently valued at more than $5 billion, figure into the University's budget?

It is a great thing that we have the endowment. For some departments that have endowed funds, it really makes the difference between their being in the game or not being in the game. And the endowment in particular has been an important support for faculty members, because we do have endowed professorships that supplement the salary that we're able to pay out of tuition and taxpayer money. That's very important, especially in some parts of the University. But that money is not spread evenly across all the schools within the University. And it's not spread evenly across the departments inside a single school. So while it's very helpful, it's not sufficient by itself.

Q: Governor McDonnell included $2.69 million toward the $4.69 million replacement cost of the Rotunda's roof in his amendments to the General Assembly's 2011 budget. And the roof is just the beginning of a two-phase, $51 million restoration project. What are the issues with the Rotunda?

A: The No. 1 need with the Rotunda right now, and what I asked the General Assembly for, is $2.6 million to replace the roof, because the roof leaks. As every homeowner knows, if you get water inside the envelope of the building, it does a lot more damage.

The larger figure, the $51 million, includes replacing the mechanicals and the HVAC and so on, which a building of that age eventually needs. It also appears that the Corinthian capitals are going to have to be replaced, because the marble is sugarizing.

Q: In the current $3 billion capital campaign, $2.64 billion had been raised as of Jan. 31. As we come down the home stretch, what are the remaining priorities?