Sullivan Reinstated, and Attention Turns To Challenges Ahead 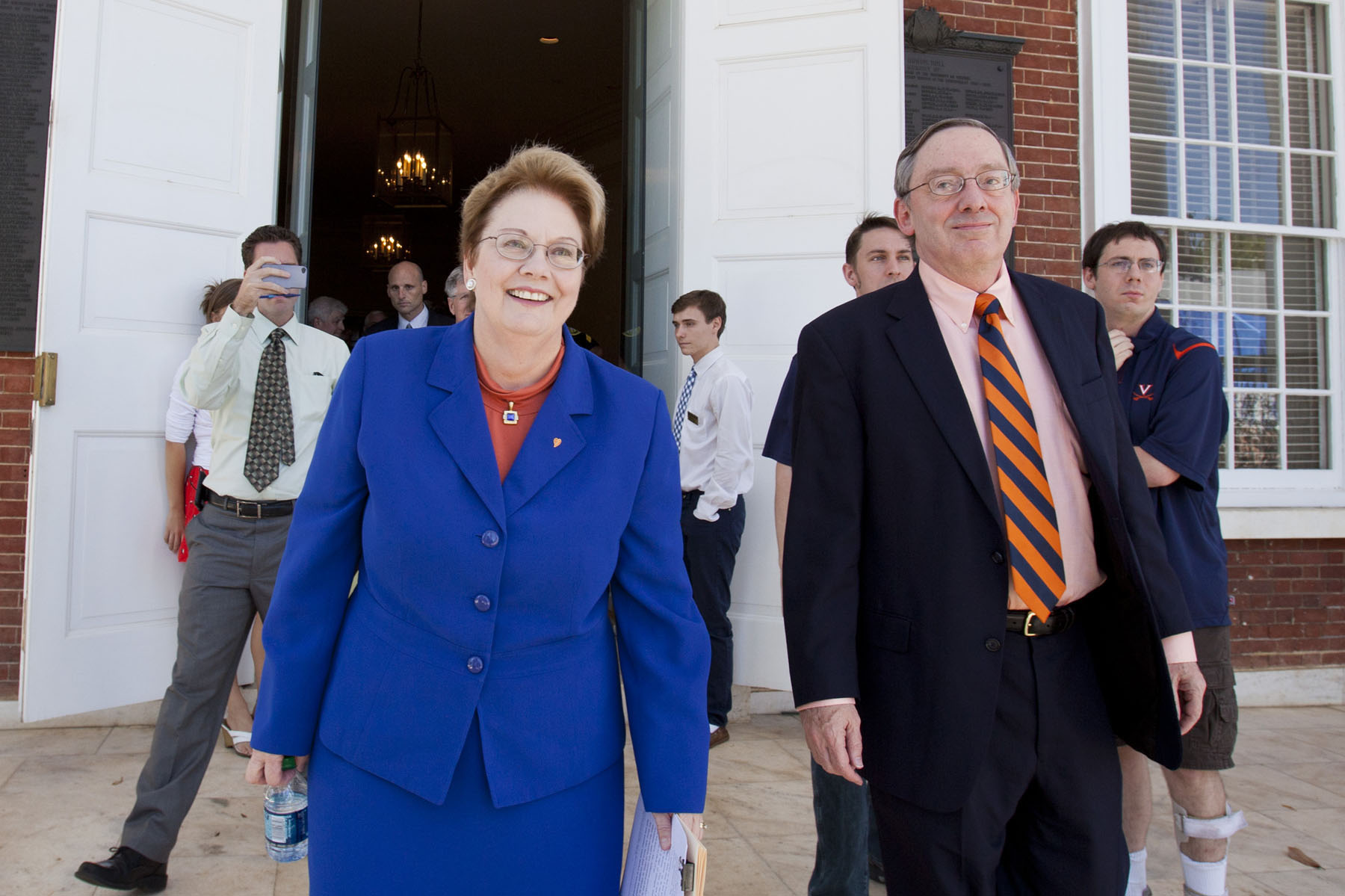 The University of Virginia Board of Visitors ended 17 days of tumult Tuesday by voting unanimously to reinstate Teresa A. Sullivan as president, and called for the University community to unite behind her to address the many challenges facing it and higher education.

"While many believe that the past two weeks have threatened our great institution, I believe that we have been strengthened by the experience," Sullivan said. "It has, in fact, propelled our academic community to a new place and made it ready to face a quickened pace of change.

"My goal is to harness the enthusiasm that has been generated and use it to the University's competitive advantage."

Since the June 10 announcement of Sullivan's forced resignation, just 22 months into her tenure as the University's eighth president, the spotlight has focused with a rare intensity on the University – and on the challenges that face flagship public institutions of higher education.

Tens of thousands of words have been published in recent weeks. The members of the news media covering Tuesday's meeting in the Rotunda spilled into an overflow room, and more than 13,300 people viewed a live webcast of Tuesday's board meeting. Outside the Rotunda, more than 1,000 people gathered on the Lawn to await the results of the meeting.

With most faculty, alumni, students and administrators united behind Sullivan, she called for swift action to address the University's challenges, many of which had been enumerated Thursday in a statement by Rector Helen E. Dragas: reduced state and federal funding; the need to address the proper role of technology in the educational experience; coping with a rapidly changing health-care environment; making difficult decisions about resource allocation; reviewing faculty workloads and the quality of the student experience; reversing declining faculty compensation; increasing philanthropy; boosting research funding and activity; ensuring accountability for academic quality and productivity; and meeting the need for fortified, multiplatform communications.

"We are not in crisis, but change appropriate to our mission is necessary," Sullivan told a crowd assembled outside the Rotunda after the reinstatement vote. "This change is not the duty of the president alone, but will require all of us – the board, our donors, the leaders of the commonwealth, those of us who work here and study here now, as well as those who have studied here in the past and now constitute our global network of alumni."

Board of Visitors member W. Heywood Fralin, a former rector, said the University is "united unlike ever before in my memory."

"Speaking for myself, but probably with the agreement of every member of this Board of Visitors, I would like to thank the many students, faculty, staff, alumni and friends who have demonstrated their strong opinions and concerns for the University of Virginia during this tumultuous time," he said. "You deeply love this University and want it to remain one of the world's top institutions. The University community – working together – will make this happen."

Before he introduced the resolution to reinstate Sullivan, Fralin called for the board to form a strategic planning committee, with representation from faculty, staff and students.

Dragas seconded Fralin's motion for reinstatement, and offered her own remarks.

"I believe real progress is more possible than ever now, because there is absolutely no denying that all of the wonderful people who make up this community are as awake and engaged as ever," she said.  "… The work ahead will surely be charged with renewed passion and energy for accelerated progress in tackling the many challenges faced by every university today.  It is unfortunate that we had to have a near-death experience to get here, but the University should not waste the enormous opportunity at hand."

Law professor George Cohen, who, as chair of the Faculty Senate, was among the leaders of the drive to reinstate Sullivan, smiled broadly as he accepted congratulations from well-wishers on the Rotunda's portico. He said he was ready "to take a breather," but looked forward to engaging in serious discussions to address the challenges ahead.

He said that volunteer faculty task forces set up during the leadership crisis would likely be reconfigured and reconstituted to address the issues the rector raised.

How It All Went Down

At 3 p.m., the appointed time of the meeting, almost everyone was in place and the board room went quiet. Two seats remained empty: one for Sullivan, who was not expected to attend, and one for Dragas, who was to chair the meeting.

The first public hint that something unusual was happening came five minutes later, when the rector and the deposed president arrived together and took their seats.

Dragas called the meeting to order and opened by apologizing to the University community and to her fellow board members for the tumult of the past 17 days. "We never wished nor intended to ignite such a reaction from the community of trust and honor that we love so dearly," she said. "… I want to say once again to the University, and directly to my fellow Visitors: I sincerely apologize for the way this was presented, and you deserved better."

Fralin, whose final term on the board ends Sunday, introduced the motion to reinstate Sullivan with a lengthy preamble. He thanked students, faculty, staff, alumni and friends for their constructive input; thanked Gov. Robert F. McDonnell for his support of higher education, and thanked McIntire School of Commerce Dean Carl P. Zeithaml – who had been designated as the interim president – for his willingness to serve.

He again acknowledged the "flawed" process that led to Sullivan's ouster, and called for the new board – which could include up to five new members, appointed by McDonnell – to look into improving board governance.

After Dragas surprisingly seconded the motion, she read her own statement calling for united action under Sullivan's leadership.

Though she decried the vitriol that had been directed at the board from some quarters, she added, "The trials of the last two weeks have given us all a unique opportunity to witness the true strength of character of this community, and that of its individual members. It has given us a keenly sharpened awareness of the critical importance of the values we espouse, and it has fostered much discussion about other values."

A roll call vote found unanimous support for the resolution to reinstate Sullivan, and cheers were heard inside the board room from the crowd gathered on the Lawn, where many followed the webcast on their phones or listened to audio being amplified from Pavilion I.

Fralin then introduced a second motion supporting and commending Dragas, who had been the focus of those opposing Sullivan's ouster. It passed with near-unanimous voice vote – the only dissenter being Dragas, who smiling as she declared, "I abstain."

"I want to thank you all," she added, "and I am very humbled by your support."

Sullivan briefly addressed the board as well, thanking the members for renewing their confidence in her. "I do not ask that we sweep any differences under a rug, but rather that we engage one another in candor and respect. All of us seek only one thing: what is best for our University."

The meeting adjourned, and Fralin invited the board members to join the University's vice presidents and deans on the portico of the Rotunda. Sullivan and husband Douglas Laycock, a law professor, received a rock-star welcome as they strolled through the glass doors and onto the portico.

Addressing the crowd, she called for unity.

" There is no time for residual hostility toward anyone perceived to have been on the other side of recent disagreements," she said. "We can go forward with what is best for the University only if we go forward together."

She also thanked Zeithaml for his willingness to serve, calling him "a great citizen of the University."

The recent events, she said, should only reinforce incoming students' decisions to attend the University, "because in recent weeks you have seen how this community of teachers and students can engage one another in serious but civil debate."

Likewise, she invited faculty members who resigned over her ouster, or who are considering an offer to leave, to reconsider. "Stay here and make us even better," she said.

As John Simon, executive vice president and provost, stood nearby, Sullivan had a word of warning for institutions planning to raid U.Va. faculty: " You will have to come through John Simon and me to do it."

She thanked alumni for their words of support, and asked donors to "please stay with us."

She closed with a few personal words.

"My family and I could not have imagined the events of recent weeks when we moved here 22 months ago," she said, drawing some laughter. "But it would have been even harder to imagine the outpouring of affection and concern that we have received from you in recent days. I cannot tell you how humbled I have been by your prayers, by thousands of messages, and by your efforts on behalf of the University we all love.

"I am not good enough, or wise enough, or strong enough to do everything that needs doing at U.Va. on my own, but you have shown beyond a shadow of a doubt that I am not alone."

A group from the University Singers then led the assembly in "The Good Ol' Song."

Maybe not a "kumbayah" moment, but definitely a "wahoo-wah" one.

Class of 2020: Memories and Moments From a Long-Anticipated Celebration END_OF_DOCUMENT_TOKEN_TO_BE_REPLACED