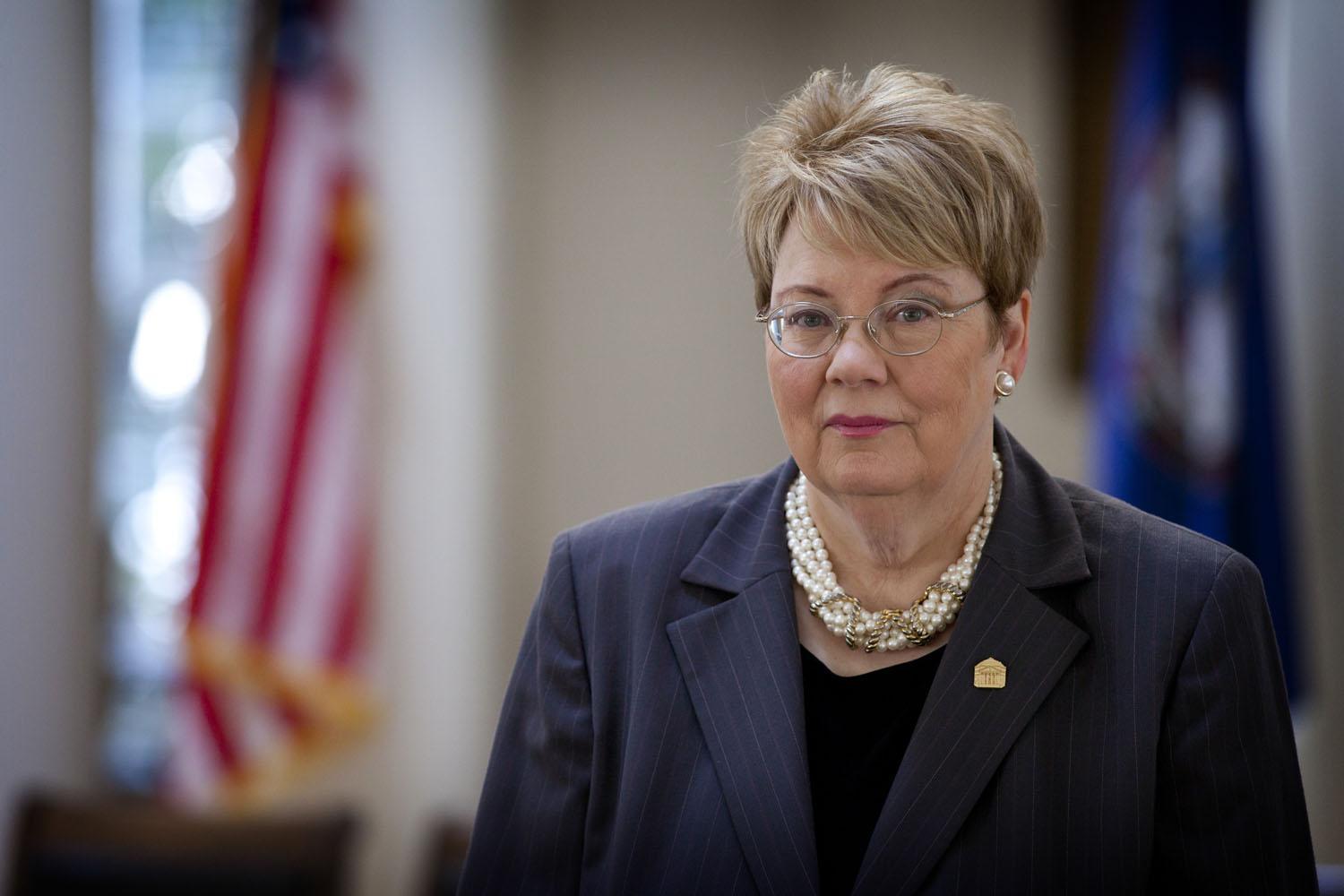 University of Virginia President Teresa A. Sullivan delivered the following prepared remarks during the Board of Visitors meeting on Thursday:

I want to begin by thanking the Rector for his words, and I want to echo one of his comments:

The work before us now is to learn from what happened and to defend our values, our University, and our people from any such future attacks.

Let me be clear:  At the University of Virginia, we denounce white supremacy, anti-Semitism, and every other form of bias and hate that the August 11 marchers brought to our Grounds, no matter which group espouses them.

Those beliefs belong in the “ash heap of history.” Diversity and inclusion make us a stronger nation and a stronger University.

Today we speak as a unified and diverse community to denounce those who would seek to divide us, but we know that words alone are not enough. We are committed to taking the measures necessary to prevent any similar attack from happening here again.

This week, the Working Group chaired by Law Dean Risa Goluboff issued its report assessing the events of August 11, with suggestions for how the University could have improved its response. You will hear from Risa tomorrow.

The report acknowledges the things we did right, such as increasing the number of UVA police on duty on the night of August 11 and working with our state and local partners to coordinate resources. It does not mention, but I wish to acknowledge, the mobilization of our hospital and Health System to handle a mass-casualty incident on the next day.

The report also makes several recommendations. During this board meeting, we are asking you for action on several related issues. They include:

Parenthetically, I also want to note that yesterday, we celebrated the naming of Pinn Hall for a distinguished African-American alumna and physician.

Prior to the Working Group’s report, we had already taken immediate steps to make UVA safer. These have included:

We will be taking more steps in the days ahead to create a safer, and more equitable and inclusive University community.

As we continue working toward greater diversity and inclusion, we must also continue to uphold the principles of the First Amendment, as the rector mentioned. We must continue to foster free speech, open discourse and the clash of ideas. Any restriction on free expression is incompatible with the values of higher education and our University’s commitment to the freedom of the human mind.

These two commitments — to free speech, and to inclusion —sometimes come into conflict with each other, but we cannot sacrifice one to preserve the other. We must uphold both, because both are essential to the excellence we seek.

What we absolutely cannot do, however, is allow the practice of free expression to cross the line into intimidation and violence and all-out attack on UVA and its people, as it did on August 11. We must and will take all necessary steps to prevent that escalation.

August 11 marked a new day for UVA, and for universities across the country, and this new day will require a shift in our mental framework. In our policies and planning, we need to prepare for situations in which demonstrations spill over into intimidation and intentional violence. Our policies need to help us prevent such spill-over, and our planning needs to prepare us to act when such spill-over threatens to happen.

We will protect the Constitutional principles of free speech, because free expression is a core value of higher education. But we will vigorously protect our people, our University and our values when they are threatened by attack.

Last Friday, at the request of Congressman Bobby Scott, I spoke before the minority members of the House Committee on Education and the Workforce in Washington. The committee held a forum on “Affirmative Action, Inclusion and Racial Climate on America’s Campuses” — an issue that’s central to our discussion this morning.

I spoke about our efforts to build inclusion at UVA, including the work of the President’s Commission on Slavery and the University. I’m pleased that the commission has accomplished so much in a relatively short time. We have:

While the Commission on Slavery continues its work, we need to address other troublesome aspects of UVA’s history. For example, we know that in 1921 President Alderman received a pledge of $1,000 from the KKK. We have a newspaper account in which he acknowledged the pledge, but no evidence that the pledge was ever paid. The KKK began to wither as an organization by mid-decade, so it’s possible that they never fulfilled that pledge.

But we’re going to acknowledge the pledge, and we’re going do so in a way that would be as disagreeable as possible for any remnants of the KKK who may be watching.

That $1,000 pledge, if inflated to today’s dollars, would be worth about $12,400. With that number in mind, I have allocated $12,500 from private sources to the “Charlottesville Patient Support Fund,” which is managed by the UVA Health Foundation, to pay medical expenses for people who were injured during the violence in August. Any leftover funds will support care for other members of our community.

In other words, we are allocating that century-old pledge from white supremacists to heal the wounds inflicted by the dying vestiges of white supremacy that struck Charlottesville last month. I hope any remaining members of the KKK will appreciate the irony.

We will continue to see issues arise on our Grounds. On Tuesday night, some community members and students held a protest at the Thomas Jefferson statue by the Rotunda, and several protestors covered the Jefferson statue in a black shroud. Although I recognize the rights of those protesters to express their opinions, I strongly disagree with their act of covering the Jefferson statue.

The history of the Jefferson statue helps to explain why I disagree with the shrouding. The statue was designed by a Jewish sculptor named Moses Ezekiel. Ezekiel was born in 1844 in Richmond and faced anti-Semitism through much of his life. He built into the sculpture a tribute to Jefferson’s contribution to religious freedom. The names of deities — God, Jehovah, Allah and others — are carved into a tablet held by a figure on the statue that symbolizes religious freedom.

Ezekiel explained that he carved the deity names to show that “under our government, they … are all God and have … equal right and protection of our just laws as Americans.”

This reminds us that, in spite of our founder’s faults, he made monumental contributions to religious freedom and other kinds of freedom, and we risk losing sight of those contributions if we shroud him in darkness because of his shortcomings.

This part of the Jefferson statue story holds special relevance because the white supremacists who marched on the statue on August 11 shouted anti-Semitic slurs, and because unknown others put up anti-Muslim signs on our Grounds on the day of the statue shrouding.

Thomas Jefferson was imperfect, but he also contributed to the religious and other freedoms that we uphold against those who would seek to divide us.

The events of the last several weeks have put UVA and Charlottesville in the national spotlight — once again. This attention is not coincidental. What happens at UVA matters because UVA matters. Because of our unique history among American universities; because of our elevated position among the best universities in the country; because of the excellence of our teaching, research, and scholarship — for all these reasons, all eyes are upon us, watching what happens here and how we respond.

Our obligation now is to use this moment of focus and attention to provide leadership, once again. And working together, that’s what we will do.

Class of 2020: Memories and Moments From a Long-Anticipated Celebration END_OF_DOCUMENT_TOKEN_TO_BE_REPLACED