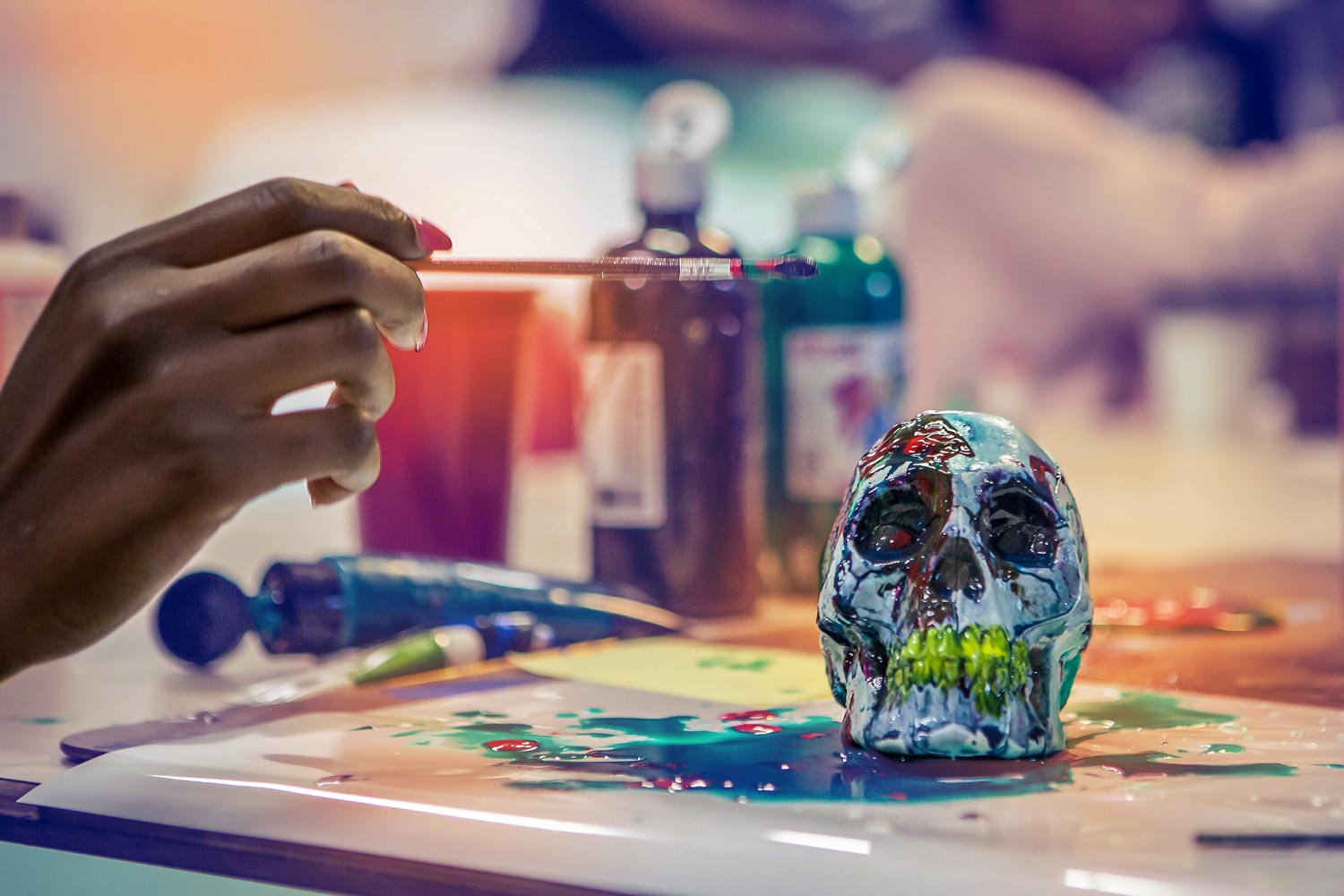 Halloween is approaching and things are getting ready to go bump in the night – driven by little servo motors.

Each year, the student residents of the University of Virginia’s Brown College at Monroe Hill host a haunted house, known as “Hauntings on the Hill.” This year, local youths have designed one room in that house.

About 18 youths, ages 12 to 18, participated in the two-week summer camp; their ranks swelled to about 30 as they continued their work through the summer and fall, culminating Friday and Saturday, when the haunted house is open to the public. This week, the youth, Computers4Kids staff and Bailey and his students started erecting the walls in the tent that will hold their creation.

Starting with sessions exploring “what ifs,” the campers brainstormed ideas, no matter how fantastic and impractical, on a whiteboard and examined them. 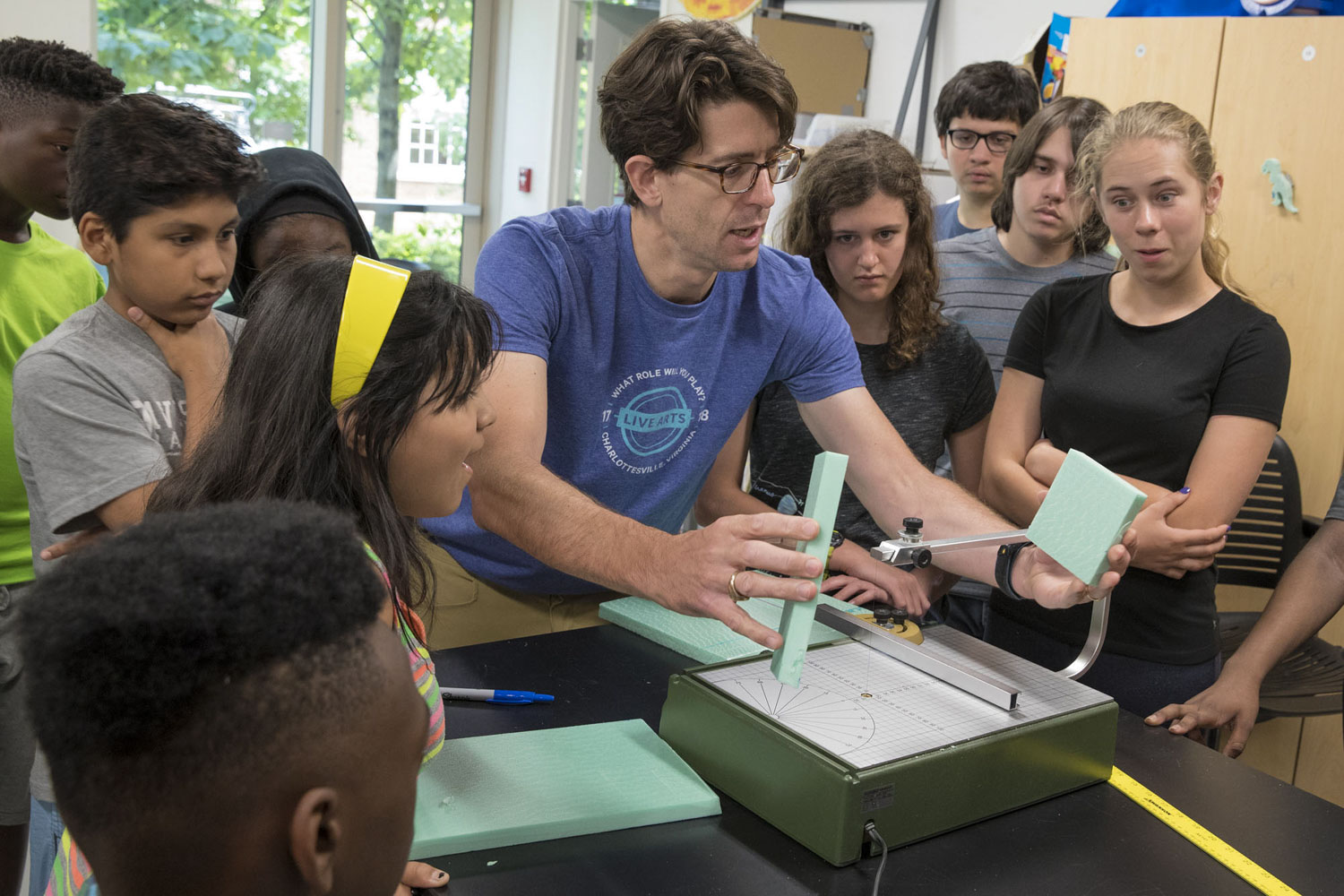 “We wanted our kids to dream big,” said Blair McAvoy, a fourth-year UVA student and project director for Computers4Kids. “We also had to work within boundaries, such as no open fire and no actually touching the customers.”

They finally decided upon “Deathland,” an abandoned carnival ground with a haunted ticket booth, a foam rotary saw designed to cut off heads, a hologram that reads twisted fortunes and a corrupted concession stand, all within a 12-foot-by-12-foot space of black plastic-draped walls.

The youths engaged in multiple projects, each following their interests for coding, or music, or make-up, or construction in designing the rooms.

Computers4Kids is a mentoring program and a drop-in center operated as a non-profit in the Ix Complex on 2nd Street SE. The teens who come to the center contribute to various aspects of the haunted house, or work on their own projects.

“They jump in for a day or for five minutes,” McAvoy said. “We have Reid Bailey’s students working with them. They can teach the kids how to do coding and technical things.”

Philip Wells, 12, of Charlottesville, who helped make the gory food for the concession stand, said he does not like Halloween or scary movies. But he does like being part of a group effort, and will be one of the teens working at the haunted house the nights it operates. 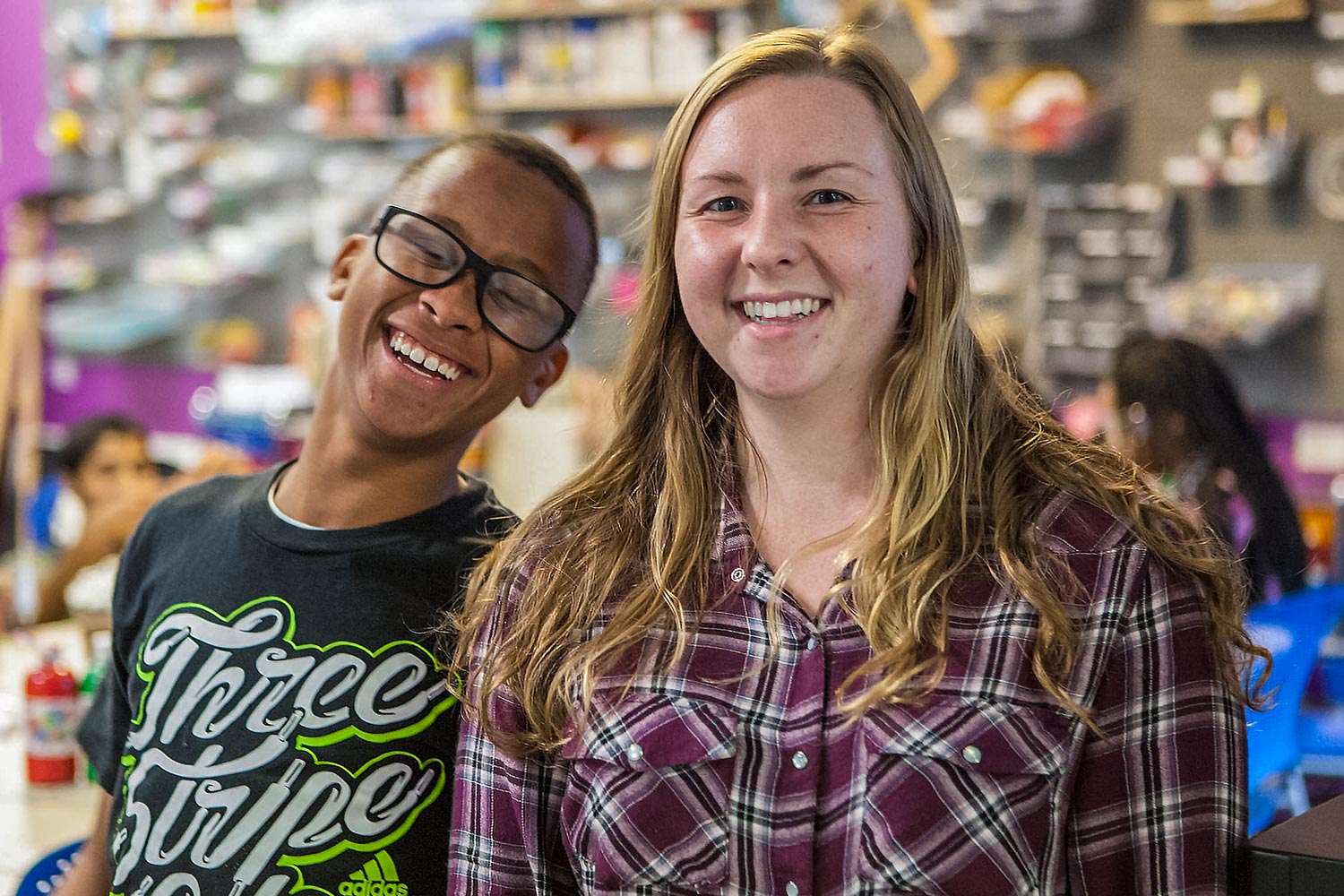 Wells said he enjoys Computers4Kids because he can play his cello as well as work on projects. On a recent afternoon, he sat off to the side playing “North Country Hoedown” while others mixed paint, fussed with arduinos (microprocessors with open-source software that the Computers4Kids students have been modifying to suit their needs) and tested lights.

“It is fun to put a lot of effort into something and have it sound really good,” he said of his music.

While Wells played, Khimora Cooper, 13, of Charlottesville, mixed a blood-colored liquid for the haunted house, working with paint, water and Mod Podge, a clear-drying glue. “I think it’s fun,” she said. “I thought it would be cool to make scary things.”

Cooper, who said she likes Halloween and watches scary movies with her father, will also be working the haunted house.

“I like doing things that are hands-on, and working there will make it less scary for me,” she said. “That’s better than me not knowing what is going to happen.” 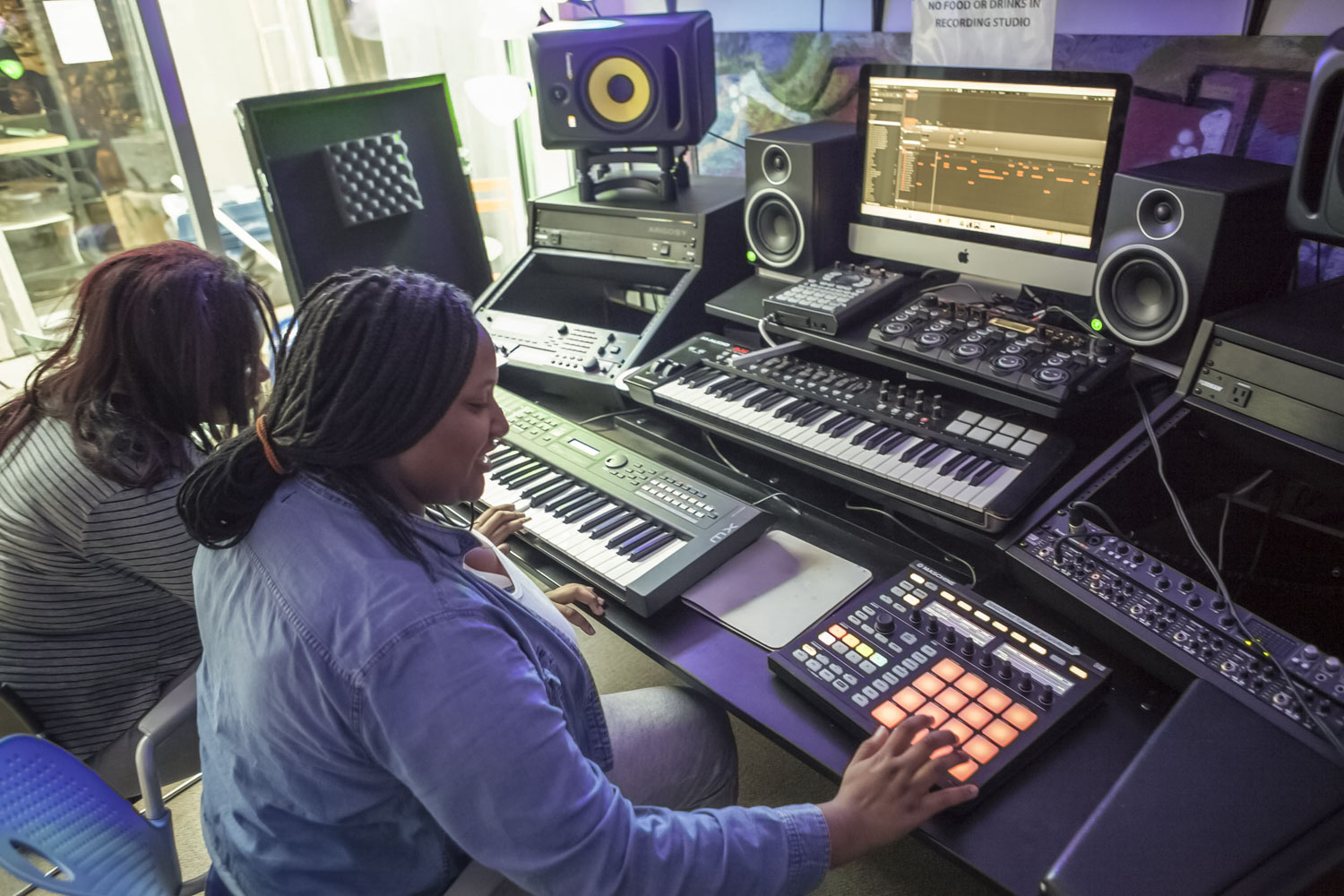 The real lesson of the camp, Bailey said, was less about working with technology and more about learning how to solve problems, work for a client and figure out how to progress through an issue.

“It engaged a lot of kids in set design, writing the music, working on the art, working on technical things – there were a lot of dimensions to this for Computers4Kids,” Bailey said. “It also taught them how to call a client and listen to that client. It helped them learn the skill of developing a working relationship and make something that is useful to someone else.”

Bailey said the Computers4Kids members’ deserted fairground room fit well with this year’s “Hauntings” theme, “Wringling Bros. Presents The Gravest Show on Earth.” The Brown residents have devised their own elements for the other rooms, including a spooky kissing booth, a hall of mirrors and a jack-in-the-box-themed room.

“Residents generally rely on costumes, make-up and jump scares to frighten visitors, but every room is different,” said Andrea Khattabi, a second-year student and one of the co-chairs of Hauntings on the Hill. 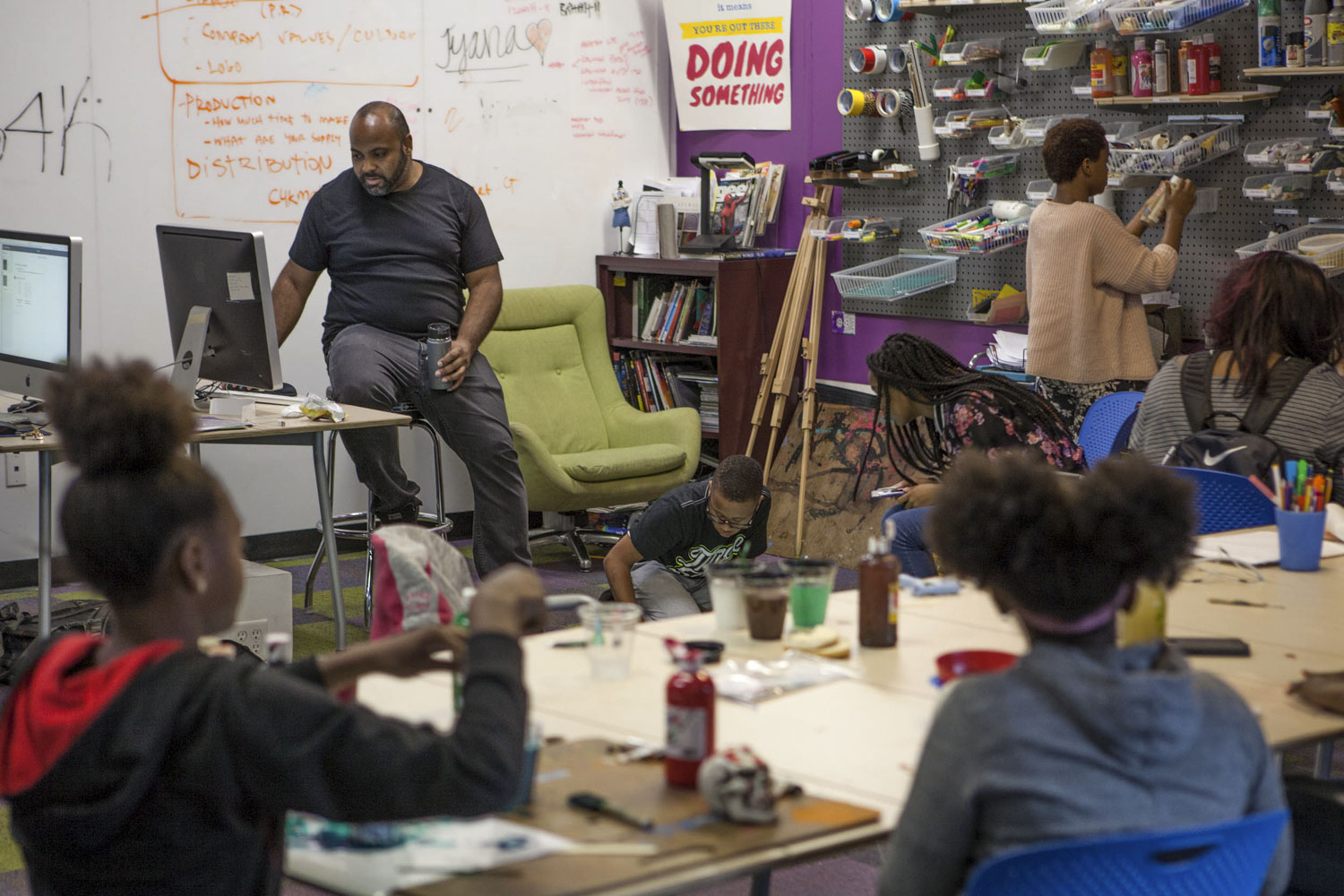 The Computers4Kids section of the haunted house will feature a combination of technology-powered devices, such as holograms, ghoulish devices and lighting effects driven by arduinos, combined with human interaction such as teen-agers hidden in the dark.

Brown College has offered its themed “Hauntings on the Hill” for about 30 years. Each year, the co-chairs collect suggestions from the residents for themes, and once one has been selected, the Brown residents pitch in.

“Residents submit artwork, help advertise, sign up for acting and guide jobs, physically build the house, do makeup and costumes, sell tickets and more,” Khattabi said. “During the actual event, we anticipate having 80 residents participating each night, whether as room leaders, guides, actors, ticket sellers, fire marshals, and/or other smaller jobs. ‘Hauntings on the Hill’ is the biggest event put on by Brown Residential College annually.”

This year is the first time outsiders have been involved in the operation and Khattabi hopes it sets up a tradition.

“The collaboration between Brown College and Computers4Kids has gone very smoothly and has been an inspiration to many members of our community,” she said. “This is the first time we’ve had an outside organization get involved with ‘Hauntings’ and Computers4Kids is helping to make this the most fun and successful ‘Hauntings’ yet.”

“Hauntings on the Hill” will be open to the public on Friday and Saturday, from 7 p.m. to midnight, with a less frightening family hour from 7 to 8 p.m. Tickets are $5 each (two for $9) sold at the door, and proceeds will be donated to a local charity. Parking is available in the Central Grounds Parking Garage.

What Is the ‘4th Side’? END_OF_DOCUMENT_TOKEN_TO_BE_REPLACED