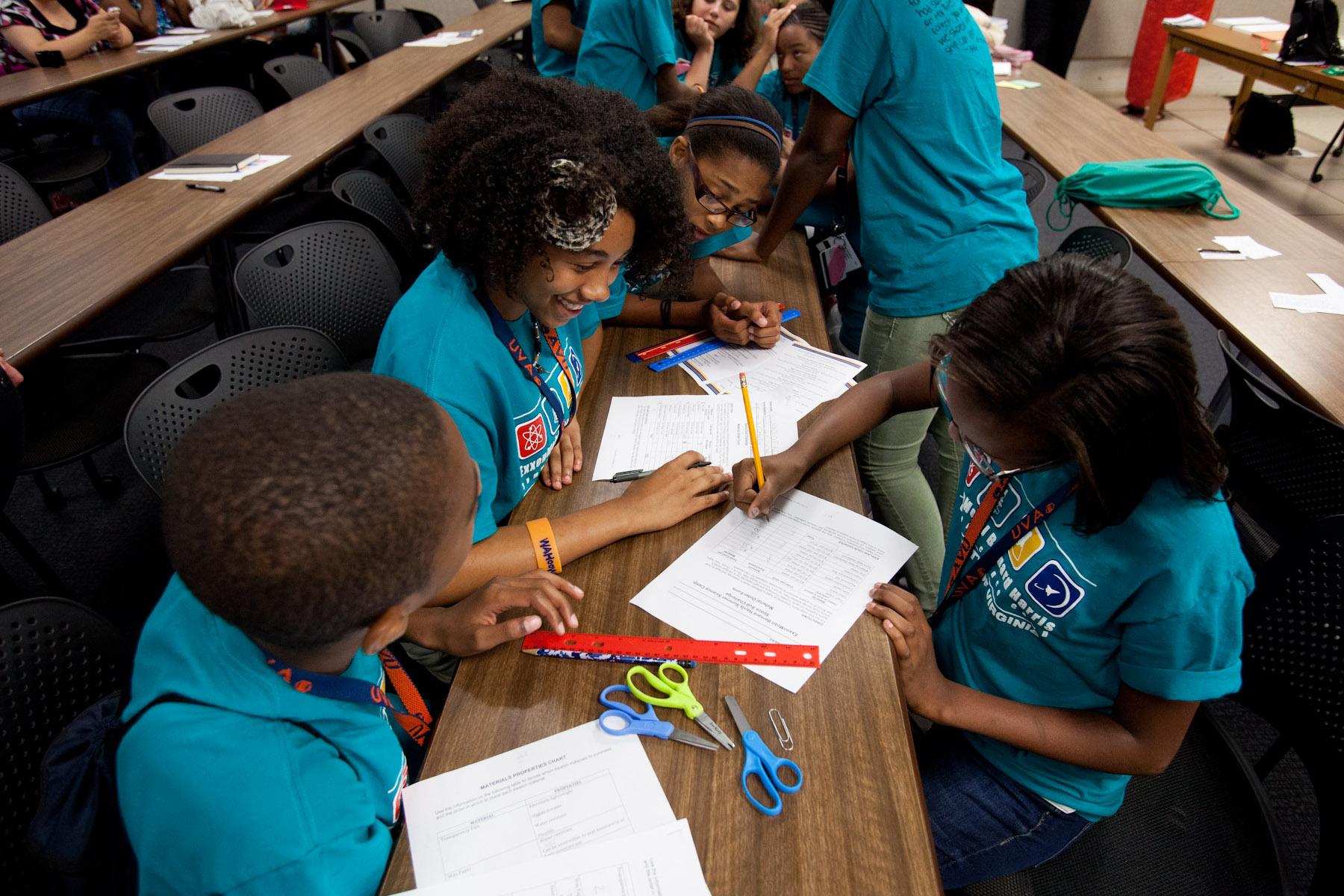 Some kids can't get enough of science, technology, engineering and math during the school year. Over the past two weeks, 53 local middle-schoolers had the opportunity to develop their interests and abilities in the so-callled "STEM" fields by attending the ExxonMobil Bernard Harris Summer Science Camp at the University of Virginia's School of Engineering and Applied Science.

The camp, organized at U.Va. by the Center for Diversity in Engineering, was founded by Dr. Bernard A. Harris Jr., the first African-American to walk in space. His foundation originally partnered with schools and universities in Texas and Oklahoma to develop the camp with the aim of bolstering the education of economically and socially challenged children.

"The Exxon Mobil Bernard Harris Summer Science Camp is an excellent opportunity to engage and excite students about STEM fields," said Carolyn Vallas, assistant dean in the Engineering School and director of the Center for Diversity in Engineering. "But to ensure a rich, innovative and diverse STEM talent pool, more initiatives need to be developed and implemented that will inspire and prepare underserved and underrepresented students to pursue and earn STEM degrees that can be used to tackle the grand challenges of the 21st century."

With the additional support of ExxonMobil over the past seven years, the camp is offered at 20 to 30 universities nationwide each summer. The U.Va. camp is attended by top students from local schools, most having an A or B average, Harris said. In addition, students must obtain a letter of recommendation from a math or science teacher and compose a 200-word essay to be considered for admission to the free camp.

The camp concluded Friday with an event for media and family members at U.Va.'s Mechanical and Aerospace Engineering Building. It featured guest speakers as well as hands-on activities and presentations that allowed the campers to display the skills they had developed pursuing this year's theme, "iCreate: STEM design for a sustainable future."

In the spirit of Harris' historic spacewalk, teams of campers enthusiastically set to the challenge to "make and test a durable space suit sample capable of withstanding the impact of micrometeoroids" with the goal to "understand how an object's kinetic energy affects the impact it has upon a surface."

To build their suit swatches, campers were restricted to 14 layers of household materials such as aluminum foil and construction paper. In addition, they were encouraged to make economical design choices in deciding which materials to purchase within a hypothetical budget.

The collaborative decision-making required underscored Harris' statement to the group that "one of the things I like about this program is that it brings about the inner leader in all of you."

The campers' enthusiasm spread throughout the room as they collected their materials and fashioned them into spacesuit material with tape and scissors. Soon all were busily swapping ideas on how to optimize and construct their designs. Many waited with bated breath to see how their team's design held up as Harris subjected their samples to the micrometeoroid testing rig, then peeled back the layers to check for damage. Despite stiff competition, the group with the best design anxiously held onto the lead with a swatch that stopped the projectile from moving past its eighth layer.

From his position as a physician, astronaut and venture capitalist, Harris said, "The reason I'm able to do all those things is that I realized early on the importance of education." As a result, he is excited about the interactive and immersive nature of the camp, which helps get kids engaged with learning regardless of their career aspirations and interests, he said.

"The Bernard Harris Summer Science Camp has been an inspiration to our community for quite a while," said Rosa Atkins, superintendent of Charlottesville Public Schools. "U.Va. has been very generous in offering this facility" to host the camp.

Charlottesville city councilor Kathy Galvin said that the camp left her "impressed by the collaboration of institutions in the public, private and governmental sectors."

James H. Aylor, dean of the Engineering School, spoke at the event, calling Harris "a rock star to us scientists and engineers," and emphasizing the exploratory side of learning. "It's not just what you know, but what you don't know and how you find it," he said.

After polling the campers' interests, which ranged from sports to forensic science, Harris underscored the usefulness of a STEM education in every field and the importance of mentors.

"When you find something you want to do, find someone who is doing that and find out how they do that," he advised the campers. "Mentors really help you."