Sunflowers Move by the Clock

It’s summertime, and fields are colored with an array of flowering plants – some of them sunflowers – that are dutifully watching the rising sun. Plant biologists at the University of Virginia and two universities in California have now discovered how young sunflowers use their internal circadian clock – acting through growth hormones – to follow the sun from east to west during the day, then return to face east by dawn as they grow.

“Many studies have examined the plants’ clocks’ role in modulating growth under controlled conditions, but this is really one of the first to show that under ever-changing natural conditions out in the field, the clock works with light cues to direct growth in ways that have major consequences for biomass and reproduction,” said one of the study authors, biologist Benjamin Blackman of UVA and the University of California, Berkeley. He conducted his research supported by a National Science Foundation grant from the Plant Genome Research Program at a field site at UVA’s Morven Farm, along with former Harrison Undergraduate Research Scholar Evan Brown, a 2014 UVA alumnus.

The paper appears in the current edition of the journal Science.

Blackman worked with Stacey Harmer, a University of California, Davis molecular biologist who studies plant circadian clocks. Harmer’s lab previously had discovered links between “clock” genes and the plant hormone auxin, which regulates growth. But Harmer and Blackman needed an example to work on, and they found it in the sunflower. 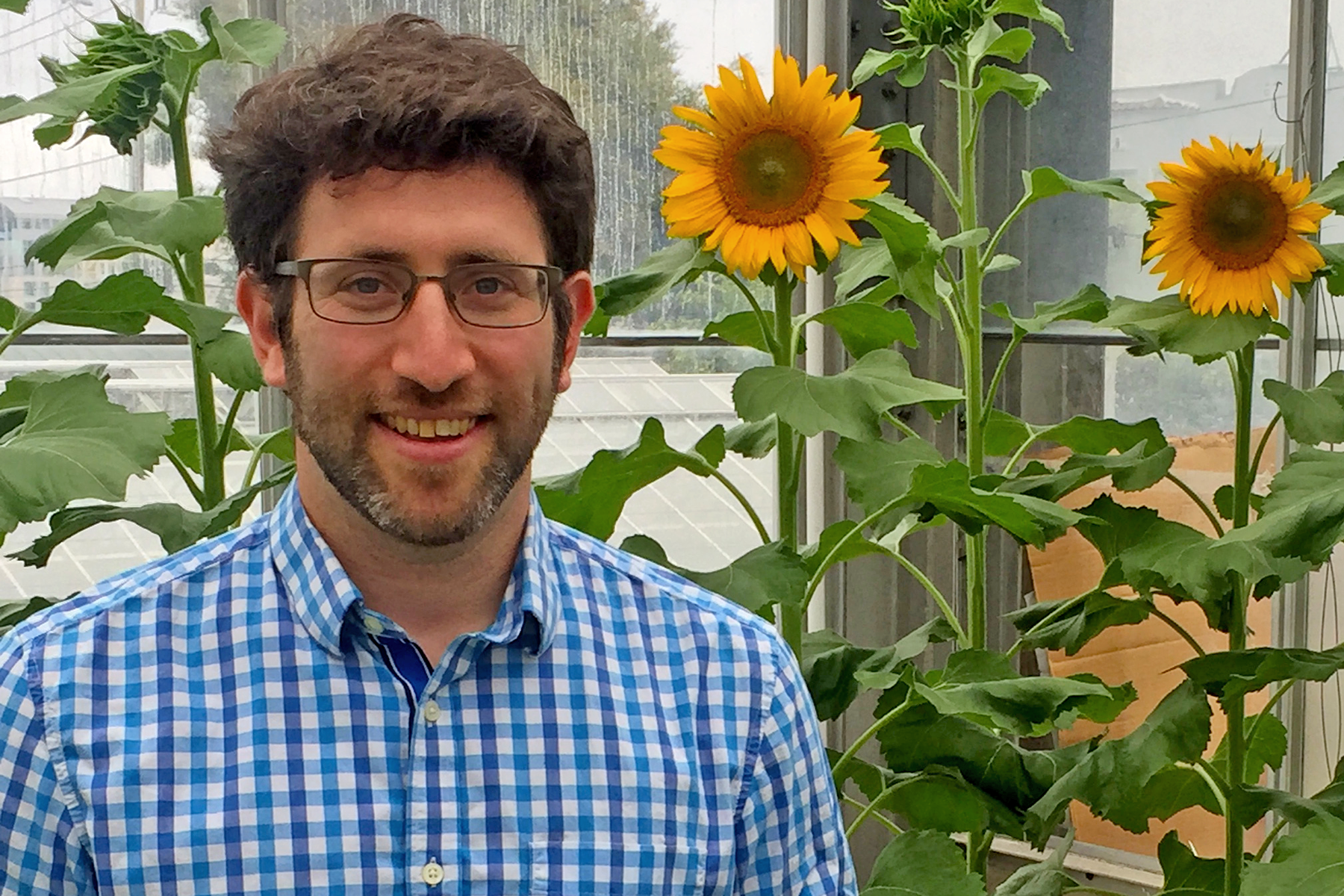 Growing sunflowers begin the day with their heads facing east. They swing west through the day, and turn back to the east at night, anticipating the timing and the direction of dawn.

“To me, that looks like a reason to have a connection between the clock and the growth pathway,” Harmer said.

Scientists as far back as 1898 had described this behavior of sunflowers, but no one had thought to associate it with circadian rhythms.

“Before our experiments, few studies – the latest more than 50 years ago – had assessed how sunflowers returned at night, and they had suggested some internal ‘habit’ was involved, but did not directly implicate the clock,” Blackman said.

Hagop Atamian, a postdoctoral researcher in Harmer’s lab, carried out a series of experiments with sunflowers in the field, in pots outdoors and in indoor growth chambers.

By staking plants so that they cannot move, or turning potted plants around daily so that they were facing the wrong way, they disrupted the ability of the plants to track the sun. Following the sun provides a growth boost to the plants. Sunflowers staked so they can’t move have less biomass and leaf area than those that can, the researchers found.

When plants were moved into an indoor growth chamber with immobile overhead light, they continued to swing back and forth for a few days – the kind of behavior you would expect from a mechanism driven by an internal clock.

Finally, the indoor plants did start tracking “the sun” again when the artificial lighting source “moved” across the growth chamber by sequentially turning adjacent lights on and off during the day. The plants could reliably track the light’s “movement” and return at night – but only when the artificial day was close to a 24-hour cycle. When the “day” was adjusted to 30 hours, the plants could not adapt.

So how do the plants move their stems during the day? The researchers put ink dots on each stem and filmed them with a video camera. Using time-lapse video, they could measure the changing distance between the dots.

When plants were tracking the sun, the east sides of their stems grew more rapidly than the west sides. At night, the west sides grew faster as the stems swung the other way.

There appear to be two growth mechanisms at work in the sunflower stem, Harmer said. The first sets a basic rate of growth for the plant, based on available light. The second, controlled by the circadian clock and influenced by the direction of light, causes the stem to grow more on one side than another, and thereby pushing the flower’s head east to west during the day.

“I expect that future work in those systems will find parallel results to ours if the movement is mediated by differential growth,” Blackman said. “The more general point – that one of the circadian clock’s adaptive functions is to regulate the timing and strength of growth responses to environmental signals – is one that I think will apply to a broad range of traits and species.”

As the sunflower matures and the flower fully blooms, overall growth slows and the plants stop moving during the day and settle down, facing east. This seems to be because, as overall growth slows, the circadian clock ensures that the plant reacts more strongly to light early in the morning than in the afternoon or evening, so it gradually stops moving westward during the day.

“It is because the circadian clock constrains stems to elongate most toward east in the morning as overall growth slows that you get such beautiful photographs of blooming sunflower fields, with rows and rows of yellow flowers all uniformly smiling for the camera,” Blackman said.

Growing sunflowers start the day facing east, swing west to follow the sun during the day, and move back to face east overnight.

But why do mature sunflowers face east, anyway? This was the question undergraduate Brown tackled as part of his Biology Distinguished Majors project. He grew sunflowers in pots in the field at Morven Farm, and rotated some of them to the west. Postdoctoral scholar Nicky Creux performed replicate studies at U.C.-Davis to see if the results held across very different environments as well.

By measuring the flowers with an infrared camera, they found that the east-facing sunflowers heated up more quickly in the morning. By getting out to the field at dawn and filming the plants for several hours over the course of many days, Brown also determined that east-facing plants attracted five times as many pollinating insects. Heating up west-facing flowers with a portable heater brought more pollinators back to the flowers.