Survey Says: Staff Report Overall Satisfaction With U.Va. as a Place to Work 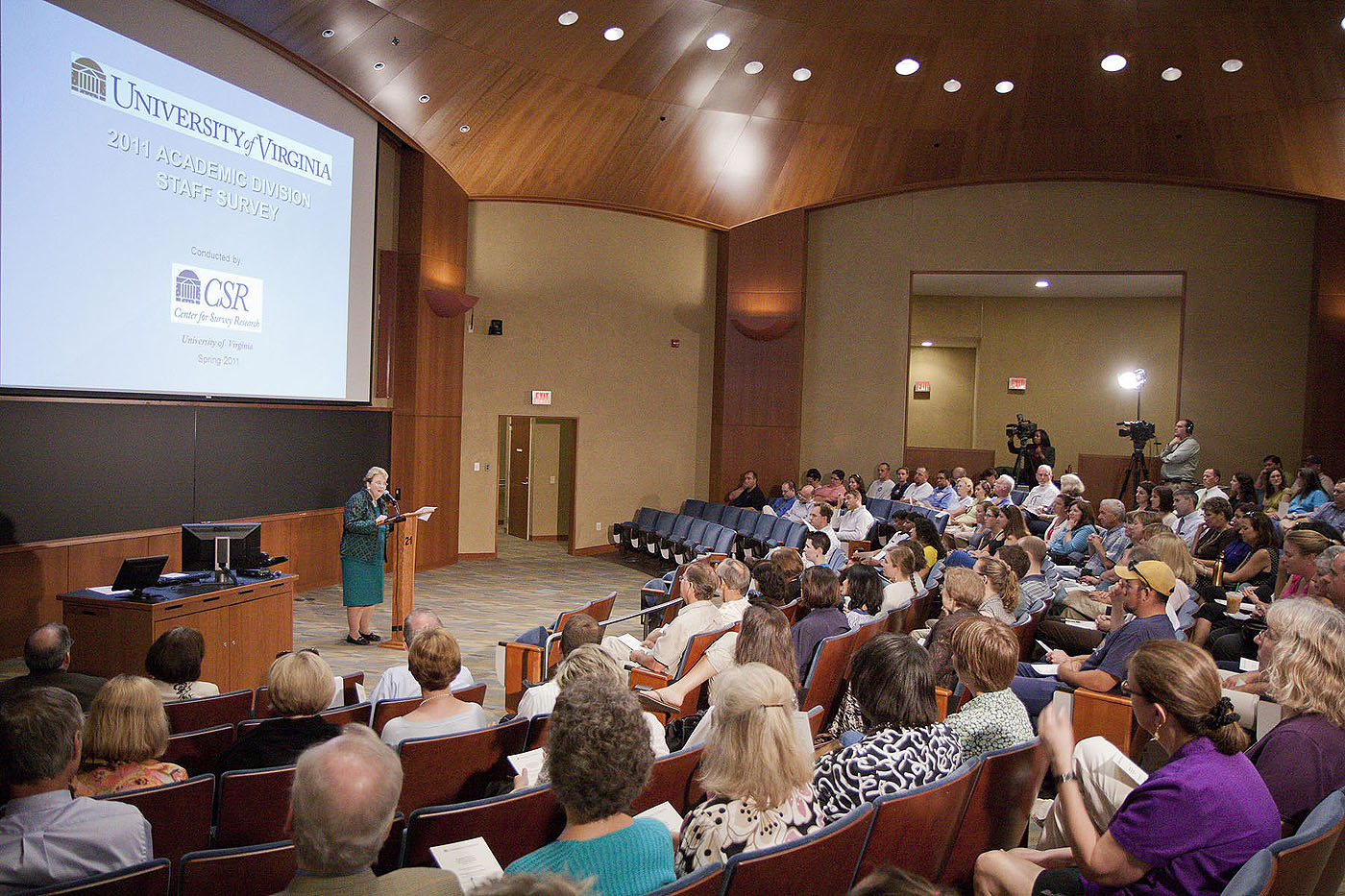 June 26, 2011 — University of Virginia employees are generally very satisfied with the University as a place to work and they expect to continue working here, according to the results of a wide-ranging survey conducted in March.

Of the University's 4,857 staff members, 3,076 – or 63 percent – took the survey. Those responding gave high marks to their immediate supervisors, their coworkers' integrity, and the University's leave and education benefits, work facilities and technology. Pay emerged as the major area of concern.

The results of the survey, administered in March at President Teresa A. Sullivan's direction, were discussed at a town hall meeting Friday that was also streamed on the Web. About 225 attended the presentation in the South Lawn's Nau Hall auditorium.

After Sullivan welcomed the audience, the University's Center for Survey Research staff, who carried out the project, and Susan Carkeek, vice president and chief human resources officer, talked about the survey process and the information it yielded, as well as what the next steps will be.

Center director Thomas S. Guterbock said the center staff worked with an advisory committee to develop the online questionnaire and tested it with two focus groups and a pilot group of 300 employees before all staff were invited to participate. The survey was directed to full- and part-time Academic Division staff members, including those at the School of Medicine and the University's College at Wise. Not included were faculty, Darden School of Business employees and Medical Center employees.

Guterbock stressed that the survey was scientific with reliable results. The respondents were representative of the whole workforce, he said, in terms of full- and part-time workers, number of years worked, age and race and ethnicity.

There were several places in the survey where respondents could write comments, and comment they did. Carkeek said survey results contain 10,000 comments, amounting to 850 pages – all of which she has read, she added.

James Ellis, the center's director of research, gave an overview of the survey process and explained key topics and results. The survey was organized into six areas, with multiple questions in each section: work environment; opportunities for training, development and promotion; working relationships; diversity, employee relations and equal employment opportunity; overall satisfaction; and demographics.

In terms of "overall satisfaction," when asked "How satisfied are you overall with the University as a place to work?," on a seven-point rating scale, almost 86 percent of respondents answered on the positive side; 14 percent were "extremely satisfied," 40 percent "very satisfied" and 31 percent "somewhat satisfied."

When asked to compare U.Va. as a place to work now compared to two years ago, about half of the respondents answered it is about the same. Twenty-eight percent answered it's worse and 21 percent said it is better. In answer to the question, "How likely is it that you will be working for the University three years from now?," 80 percent responded that they likely will continue working here.

Other aspects of employment that were highly ranked – with an average rating of more than five on the seven-point scale – included leave benefits, work facilities, technology, integrity of employees, commitment to the University, diversity and equal employment, immediate supervisor and education benefits.

Ellis also identified what employees are least satisfied with – areas where improvement efforts should be focused. Referring to them as the "three P's," Ellis said they are pay, the performance evaluation process and promotion opportunities.

In response to the statement "My pay is about the same as or better than I would receive if I were doing the same type of work for another organization," 35 percent of respondents strongly disagreed and 30 percent answered they somewhat disagreed.

Almost 48 percent disagreed with the statement, "The best chance I see for a promotion is inside my department."

Survey analysis also identified areas of perceived importance and statistically derived areas associated with employee satisfaction, Ellis said. Respondents were asked to choose up to four issues they would most like management to work on. The top five were: pay and benefits, promotion opportunities, the performance evaluation process, training and development, and employee empowerment.

The statistically derived priorities indicate that intangible aspects of the job have a strong impact on overall job satisfaction, and those somewhat differ from the topics of perceived importance. The areas that come out most important include employees' commitment to U.Va., the dignity and worth they feel, their satisfaction with University leadership and the University's commitment to its employees.

The importance of pay is the only topic that shows up in both analyses of what is important to employees, Ellis pointed out.

Sullivan pledged to share the results with the Board of Visitors.

"It is clear there are three areas of focus – those three P's," she said. Human Resources will lead an effort to address the areas of pay, promotion and the performance evaluation process.

In a question-and-answer period following the presentation, Sullivan responded to a question about where funding for merit-based pay increases for University staff might come from.

"It is not realistic to expect that the state will give us more money," she said. The other sources of funds would have to come from raising tuition and finding efficiencies. The administration will be looking for other ways to save money, but she told employees, "We need your help."

Carkeek explained that the University has much less pay flexibility for classified employees in the state-run personnel system.

One audience member suggesting conducting another survey to elicit ideas to increase efficiency and save money.

"You've given us a clear roadmap to focus our efforts," Carkeek also said. "The real work now begins."

A staff advisory committee appointed to assist with the survey will be divided into three subcommittees to address each of the three P's and will spend a couple of months delving into the data to better understand the details, eventually making recommendations for action. Carkeek said there is not a set timeline for action, and "while there may be some improvements to be made in the short term" it might take about a year before other changes can be made.

When Guterbock wrapped up his summary, he said, "It takes a lot of courage to do an organizational staff survey. The challenge is you have to do something with the results."

The survey results, including all the comments, are posted on the Human Resources website.

Class of 2020: Memories and Moments From a Long-Anticipated Celebration END_OF_DOCUMENT_TOKEN_TO_BE_REPLACED