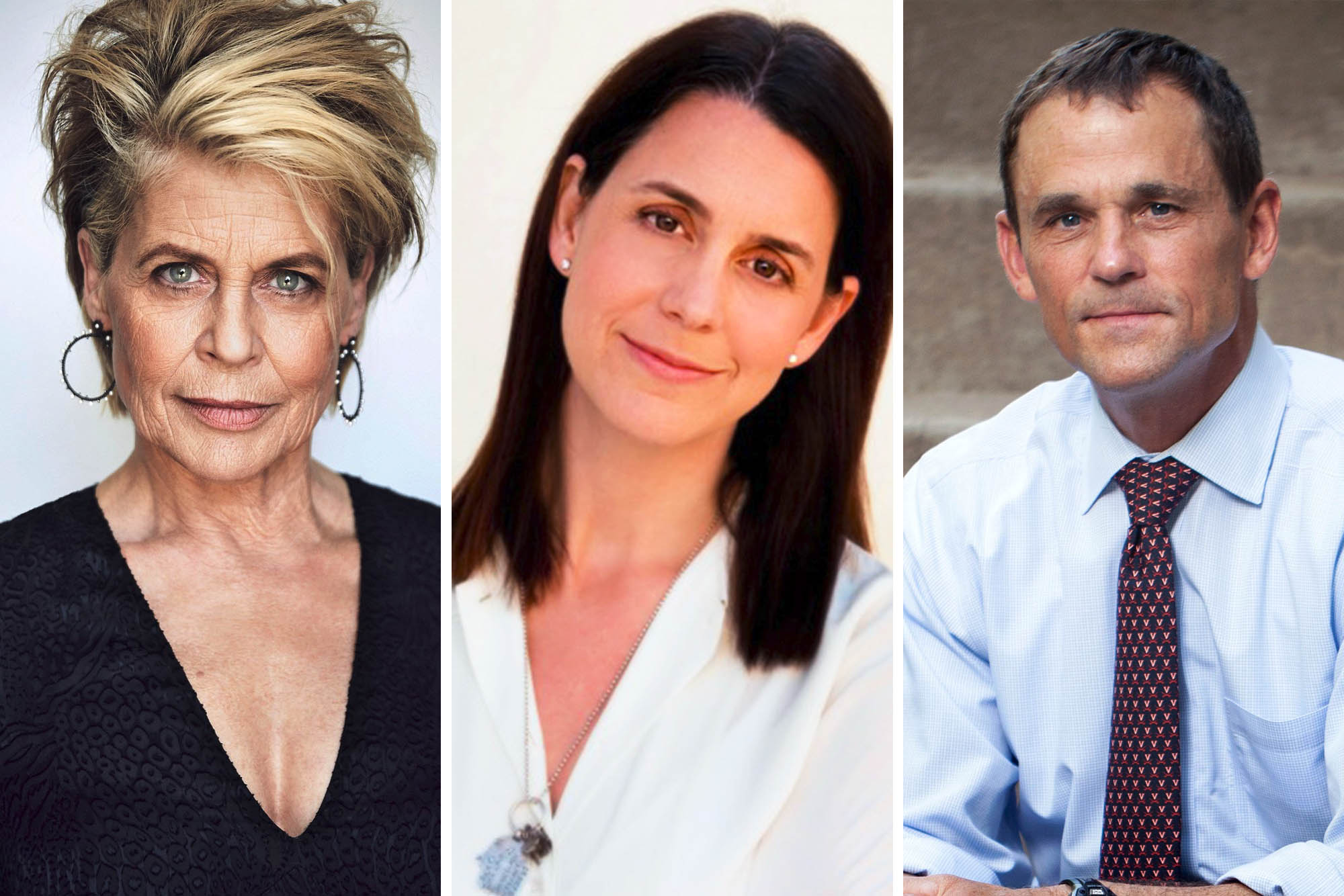 As it turns out, the “Terminator” film franchise and the University of Virginia’s School of Law share quite a few connections.

As part of this week’s virtual Virginia Film Festival program, President Jim Ryan, a UVA Law alumnus (and later a faculty member), interviewed actor Linda Hamilton, who brought action hero Sarah Connor to life in the “Terminator” series; and producer Julie Lynn, who worked with Hamilton on the 2019 film “Terminator: Dark Fate” and is on the film festival’s Advisory Board.

Lynn was a classmate of Ryan’s at UVA Law; Hamilton’s older sister, Laura, graduated from the school in 1986.

“It’s a small world,” Hamilton said. “I love Charlottesville. I actually spent a summer there, and thought I wanted to move there, but it was early days in my career and I returned to Hollywood.”

During the taped conversation, Ryan asked both Hamilton and Lynn about their roads to Hollywood, going all the way back to Hamilton’s beginnings in children’s theater and Lynn’s moves from law to politics to the film industry, where she built a long list of production credits and co-founded the production company Mockingbird Pictures.

(The full conversation will be available to view until Sunday. Viewers can either purchase an individual ticket or a virtual pass from the film festival, which is largely virtual this year due to the pandemic. More information is available here.)

Among other topics, the trio discussed Hamilton’s reprisal of the Sarah Connor role in “Terminator: Dark Fate,” released last year more than two decades after the original 1984 film. Hamilton was 61 when filming for “Dark Fate” began, and had been on a self-imposed hiatus from Hollywood.

“I had never thought or hoped to play her again,” Hamilton said, until “Terminator” director James Cameron came calling. “But so much time had passed, and I had grown so much as an actor and a person. I thought there might be some new fire to bring, that it would be very interesting to fill in 27 years of absence with my own story ... to add layers to this character that I care for greatly.”

Hamilton had to get back into fighting shape. The New Orleans trainer she hired to accomplish that mission, Mackie Shilstone, has also worked with professional athletes like Serena Williams.

“He was just so devoted to getting a 61-year-old woman in shape,” she said, calling the process “arduous and long,” but very worthwhile. “He had never worked with anyone my age. There are not any professional athletes my age!”

As tough as the physical work was, the emotional work might have been tougher.

“While I was breaking in my big, very loud dog, walking him around my neighborhood, I did some deep emotional work,” she said. “I had to go into my deepest sorrow and disappointment every day because that is who Sarah Connor is – she is disappointed in humanity, just lost, fierce and lost. There is no way to avoid the deep, painful work needed to bring that to the screen. It probably took me a year afterward to shed all of that.”

Lynn said the character – an iconic one embodying fierce resistance and fight for humanity – fit Hamilton “like a glove.”

“It really was like watching a hand go into a glove that had been made bespoke for it,” Lynn said of the first time she watched Hamilton on set. “It was really fun to watch. She was in incredible physical condition, but she also just knew the character. … She was teaching us.”

Lynn said she loved working on the action-packed film, a departure from films she had previously produced.

When Ryan asked her how she moved from their days at UVA Law to a career in Hollywood, Lynn called it “a slow progression.” When she left UVA, she got a job with the Thomas Jefferson Center for the Protection of Free Expression, a nonprofit devoted to the defense of the First Amendment. She loved it, but ultimately wanted to broaden her reach and explore her interest in film, dating back to her days as an undergraduate studying theater and foreign affairs.

“My essay for law school was about combining the arts and law. I don’t think I knew what that looked like, but I knew I wanted to combine them in some way,” she said. Soon, she moved to Los Angeles, starting out as an assistant, then a junior producer.

Then, “crazily, I started my own company,” she said. “My boss at the time told me it would never work; I would never make it.”

That boss was clearly wrong, and both Lynn and Hamilton seemed thrilled with their chosen careers. To close, Ryan asked them both what they found most satisfying about their work.

Hamilton answered quickly. “I just love acting. I love playing a part. I am so simple in my joy and wonderment about showing up on set every day,” she said.

Lynn took a moment to compare her work to Ryan’s work at UVA.

“I love how every day is different” and how communal filmmaking is, she said. “There is always a day on set where I am just gobsmacked by the amount of competence around me, … everybody working together to make something really great.

Ryan demurred the Hollywood comparison, but readily asserted that his talented colleagues are a big part of the satisfaction he finds at UVA.

“You are right about working together with amazing people on a common project,” he said. “That is a highlight of my work.”