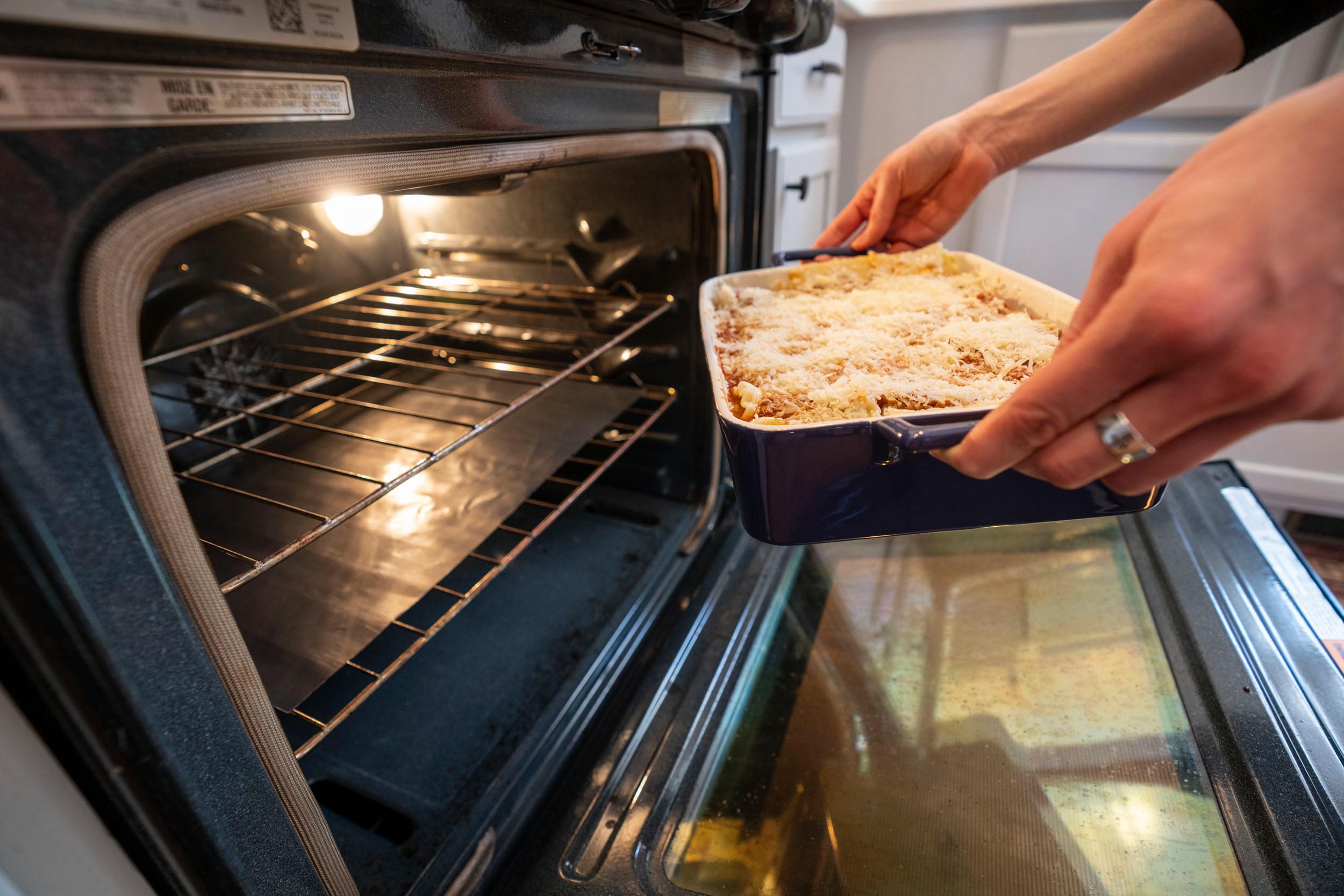 We put Woldetensae’s lasagna recipe to the test, and it didn’t disappoint. (Photo by Sanjay Suchak, University Communications)

As the only child of a single mother in Bologna, Italy, Tomas Woldetensae often found himself doing things many kids his age weren’t.

One such thing was cooking. And not the kind that just involves throwing some mac and cheese or pizza in a microwave.

Rather, Woldetensae would be in charge of preparing intricate sauces for a wide array of Italian cuisine. He was, essentially, his mother’s sous chef.

“I picked up [cooking] because sometimes she would just tell me to heat up the water if she was going to be getting home a little bit later and to just throw down pasta and do the first steps,”Woldetensae said.. “Apparently, it rubbed off on me.”

While the coronavirus pandemic has hit Italy hard, Woldetensae’s mother and family members are doing OK.Woldetensae, who speaks to his mother on a daily basis, has been living with UVA basketball manager Grant Kersey and his family in Charlottesville since the season was cancelled and classes shifted online, making a number of meals for them.

That was something that Woldtensae’s UVA teammates had grown accustomed to.

Since joining the program last May, the third-year studio art major used the recipes he grew up with to make numerous meals for his teammates.

Woldetensae is so into his culinary creations that he has never eaten at the John Paul Jones Arena dining room. “JPJ is great, don’t get me wrong,” Woldetensae said, “but I just love my cooking.” 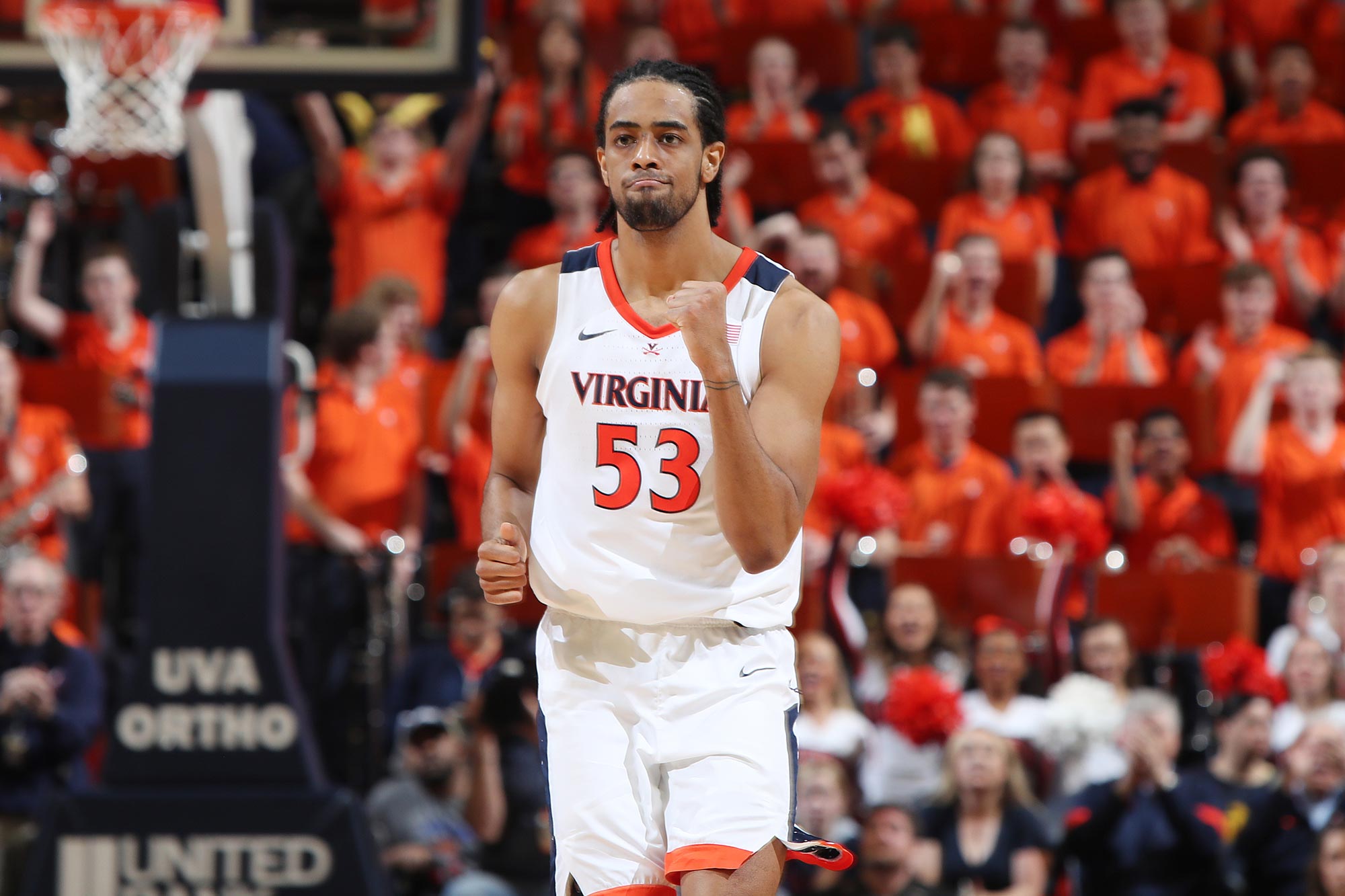 “My hometown is Bologna, and that’s the same hometown of lasagna,” Woldetensae said. “It’s pretty big.

“My mom would make it, and it would always be on weekends – due to the long process.”

When Woldetensae was acclimating to high school basketball in the United States four years ago, the dish served as the perfect comfort food. Making it for the first time by himself, Woldetensae called his mother with one question about the wine sauce, but everything else he knew by feel.

“It’s simple principles,” he said. “Back home, a lot of sauces start with celery, carrots and onion on the bottom, and then everything gets built up from there.” 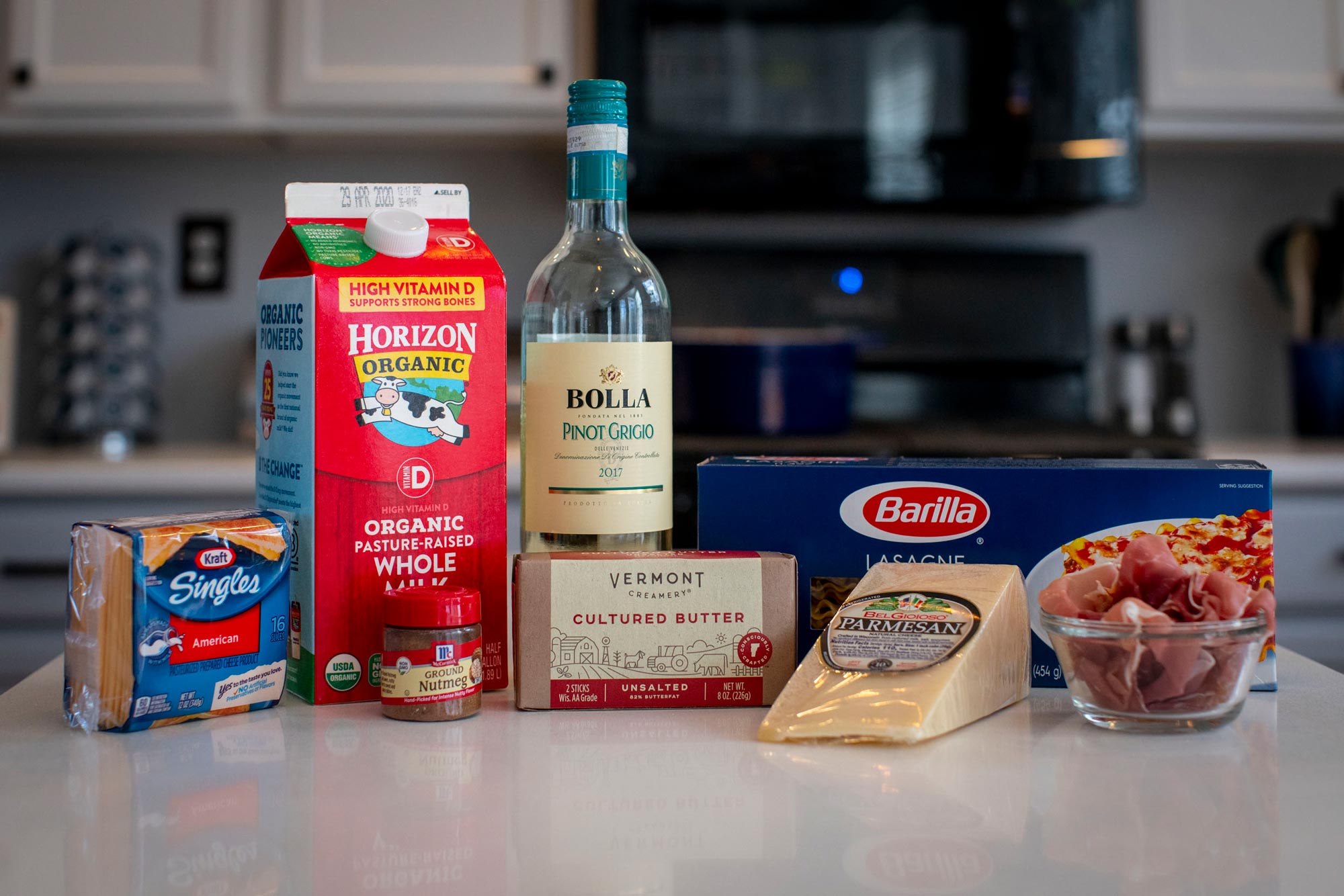 When Woldetensae talks about his passion for cooking, you get the feeling that there is a therapeutic component to it.

However, he said that’s not the case. “I would say eating is therapeutic,” he said, with a laugh. “Not the cooking part.”

It is often said that a good chef never shares his recipes, but Woldetensae said he never has any issue doing so. “There are no secrets,” he said. “It’s just about representing my culture. I appreciate people who ask me about it. It’s a way of representing your home.”

It is with this sentiment in mind that Woldetensae – named to the All-Atlantic Coast Conference Academic Team last week – is sharing his lasagna Bolognese recipe with UVA Today and Hoos fans around the world.

Except we’re not calling it lasagna Bolognese. Henceforth, it will be known as lasagna Woldetensae.

For the Bolognese sauce:

“I didn’t put any measurements because I don’t have any,” Woldetensae said. “I just go by feel.”

Once the ragù is almost done, start preparing the besciamella sauce.

Once you are done with the two sauces, start composing the lasagna.

Before the basketball was canceled and the country moved into the current time of social distancing, my colleague Caroline Newman and I set out to make “lasagna Woldetensae.”

Since my culinary skills mainly revolve around microwaving pancakes, toasting Pop-Tarts and heating cans of SpaghettiOs for my kids, I let Caroline – who has cooked some tasty things for our UVA Today staff over the years – take the lead.

Our process started with Caroline making the Bolognese sauce, per Woldetensae’s instructions: 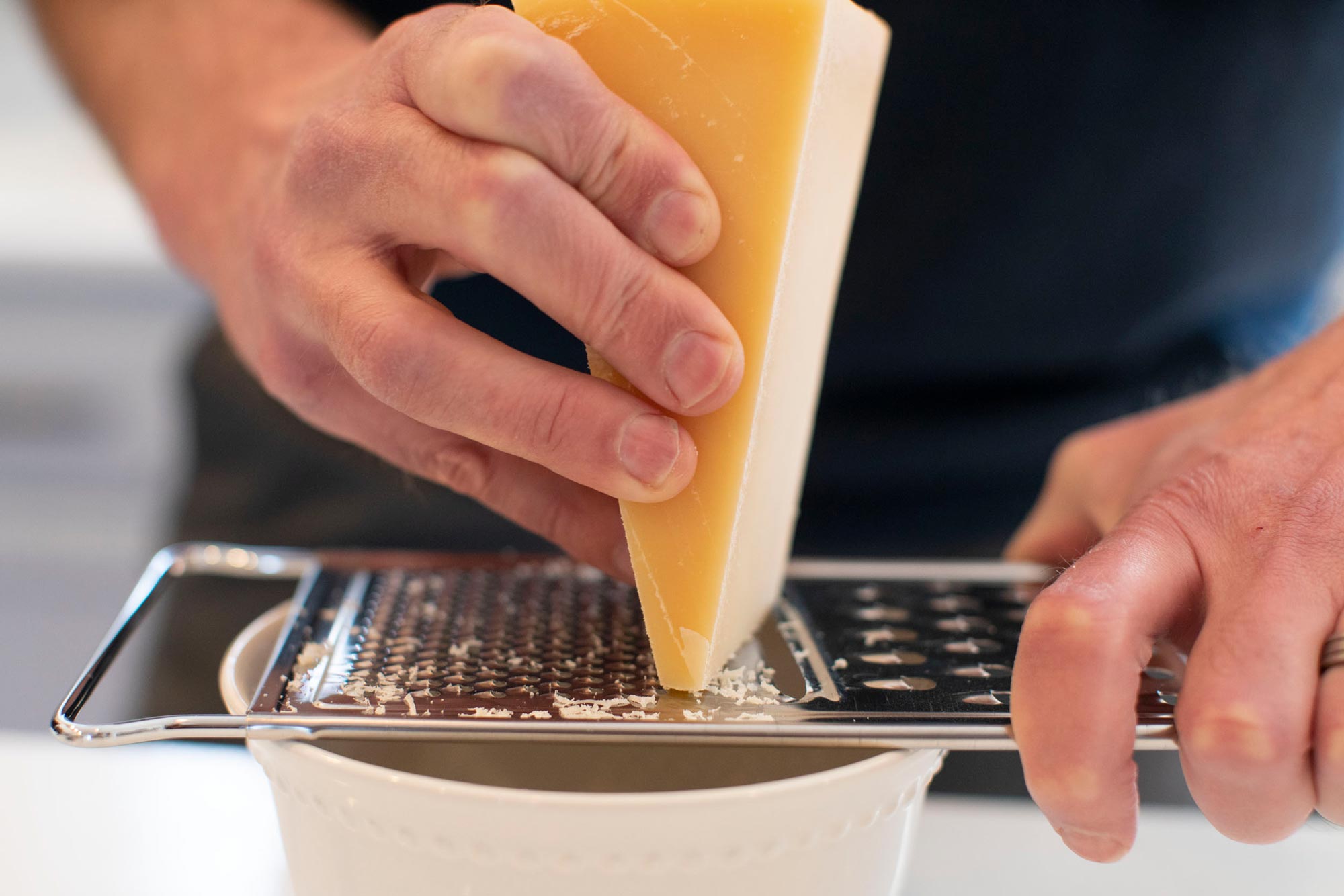 “First, you do the so-called sofritto,” Woldetensae said, “which is putting the chopped onions, carrots and celery into a pan with hot oil and sauté.

“Once they get caramelized, you add the meats (ground beef and cubes of prosciutto) and water.

“Once the water is almost evaporated, add the wine.

“Once the alcohol of the wine evaporated as well, add the tomato sauce and water.

“It needs to cook on a slow pace (for almost three hours).” 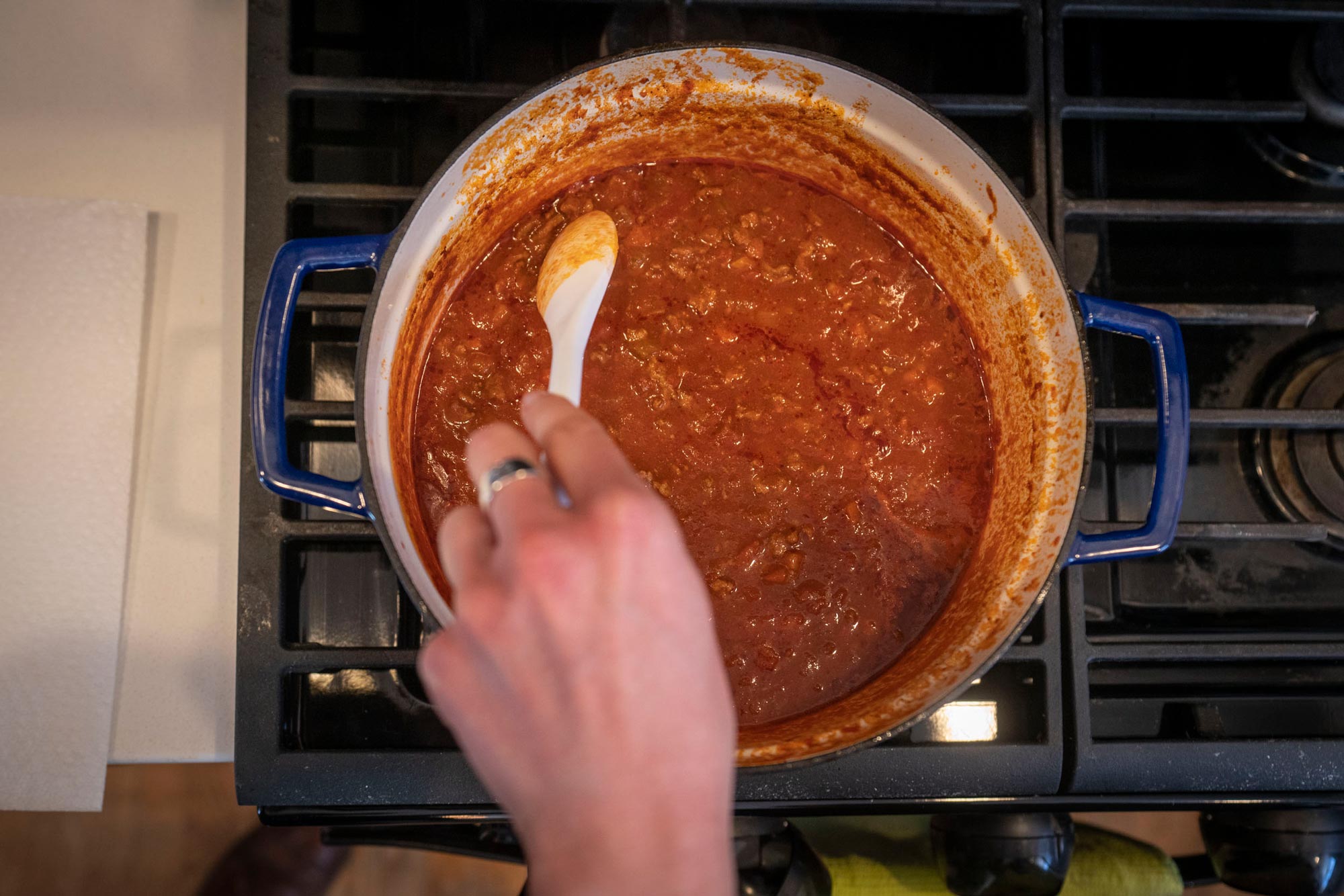 At 7:59 a.m., Caroline texted me a photo of a concoction sitting on her stovetop. “Here’s hoping this reduces to something resembling Bolognese sauce in 2.5 hours,” she said.

From there, we followed the rest of Woldetensae’s steps.

“Once the ragù is almost done, start preparing the besciamella sauce.

“Melt butter inside of a medium tall pan and then add flour. After a few minutes, add warm milk while stirring it. Keep adding milk until you get a creamy looking sauce. Then add a bit of salt and nutmeg powder.

“Once you’re done with the two sauces, start composing the lasagna. 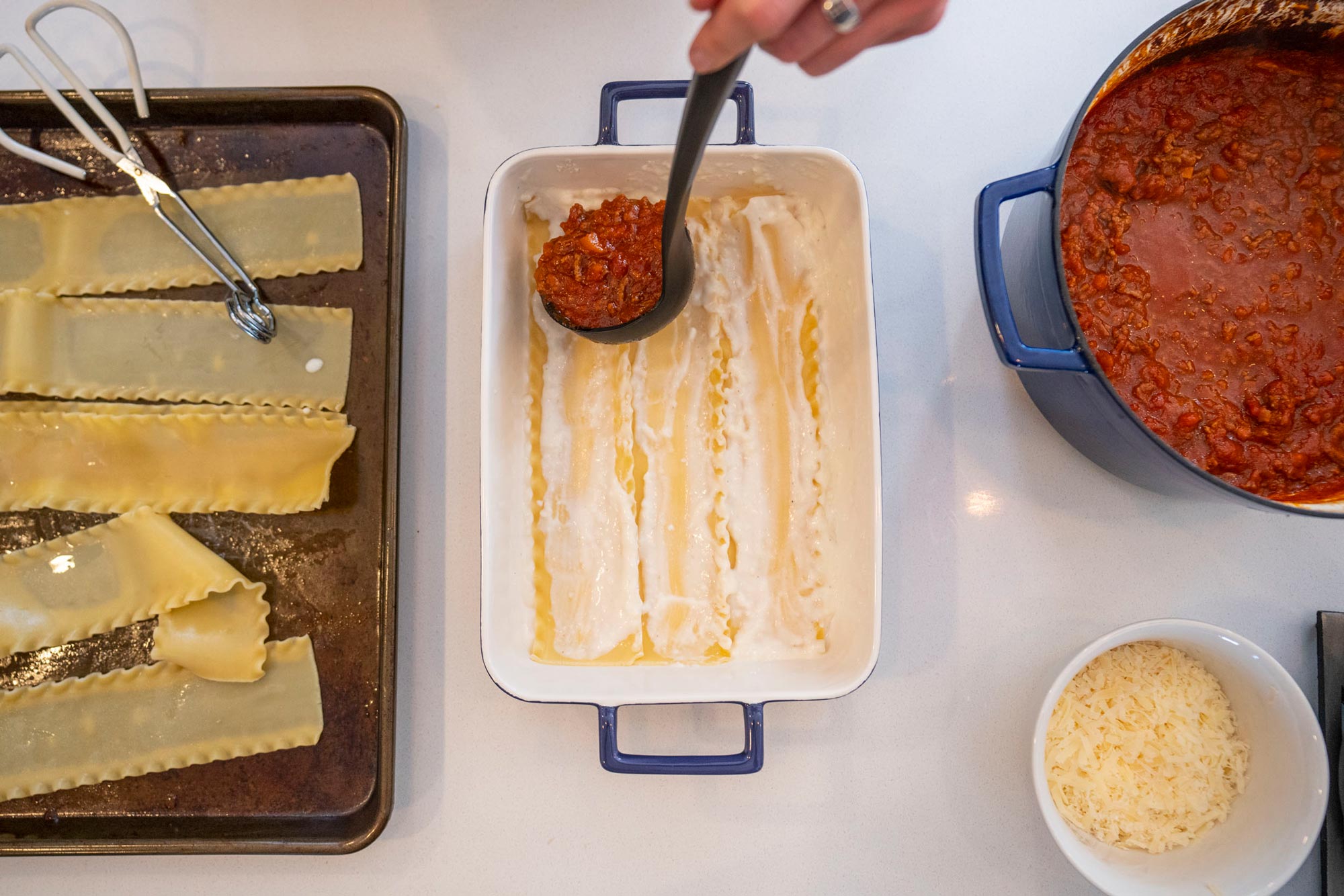 “First, a layer of besciamella (to make sure the first layer of pasta gets moisturized) and then lasagna shells. After that, a besciamella layer and then a ragù layer, and repeat for four levels.

“On the last one, add parmesan cheese.”

The one thing we weren’t sure about was the American cheese that the recipe called for. No mozzarella? No ricotta? It seemed curious, but we pushed forward, laying slices of the cheese between one of the layers. 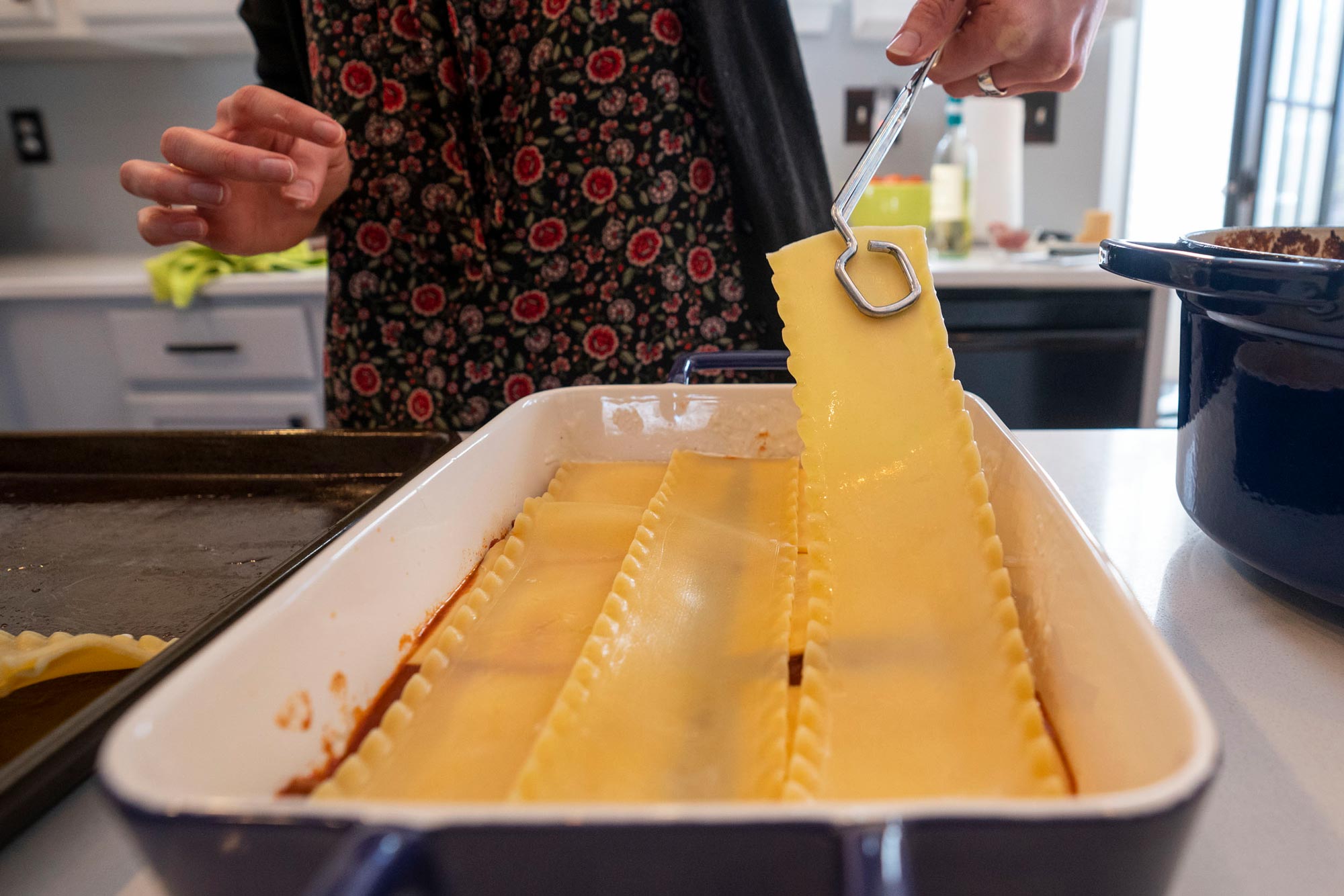 We crossed our fingers and put the whole thing in the oven, guessing that 40 minutes at 400 degrees would do the job. 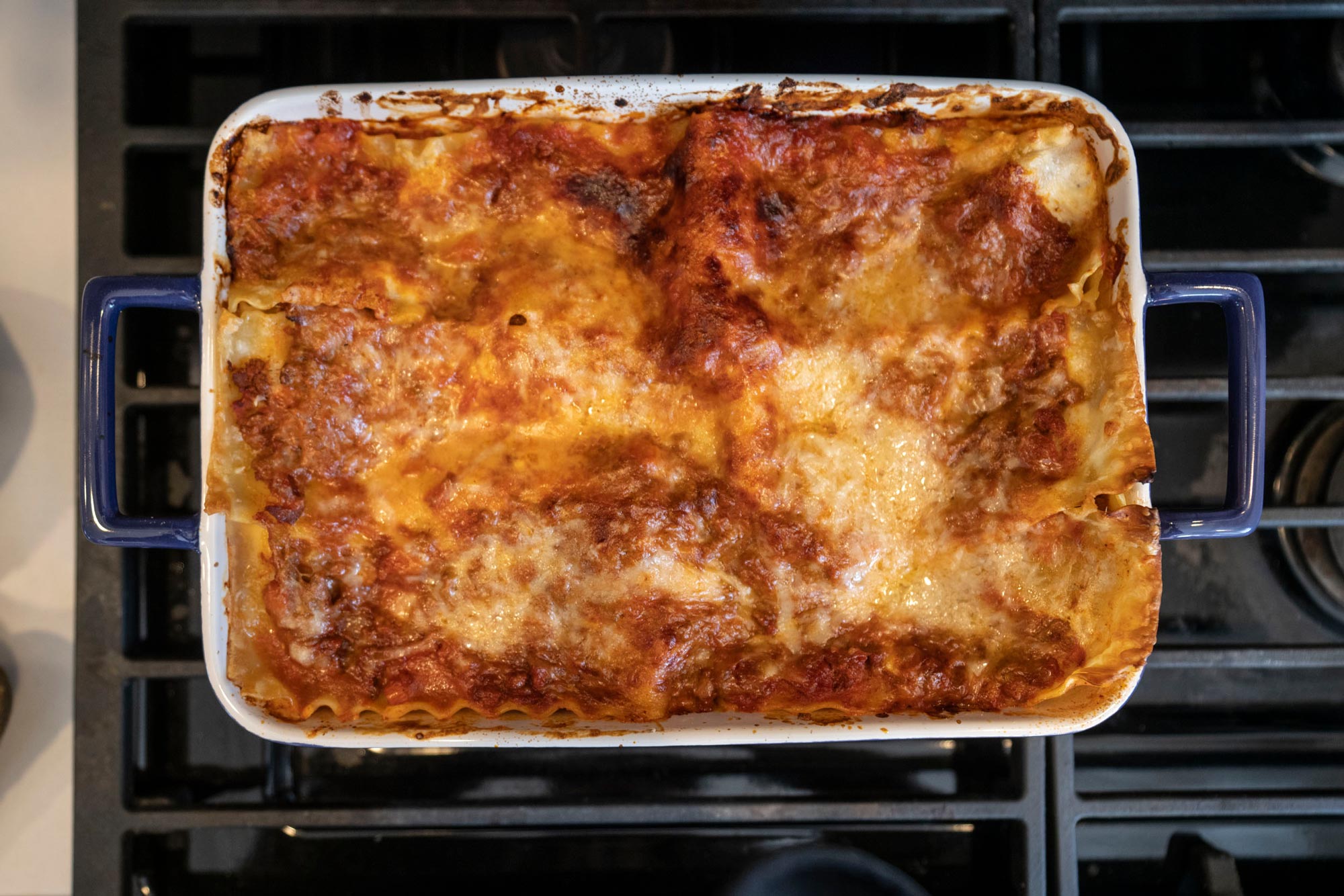 But were we really done? Of course not. Not until somebody tasted lasagna Woldetensae.

With Woldetensae busy preparing for the tournament at the time, we turned to Vinny Varsalona – a video producer here in our UVA Communications department.

It was an easy choice.

Several coworkers sill rave about the pasta e fagioli – a traditional Italian soup – that Vinny once brought to our office’s chili cookoff.

Plus, Vinny’s great-grandparents hailed from Sicily and Northern Italy, and his parents own several Italian sub shops in New Jersey.

If anybody knows good Italian food, it’s him.

So we headed back to the office, found Vinny and handed him a fork.

“Mmmmm,” were the first words out of Vinny’s mouth, after taking his first bite. 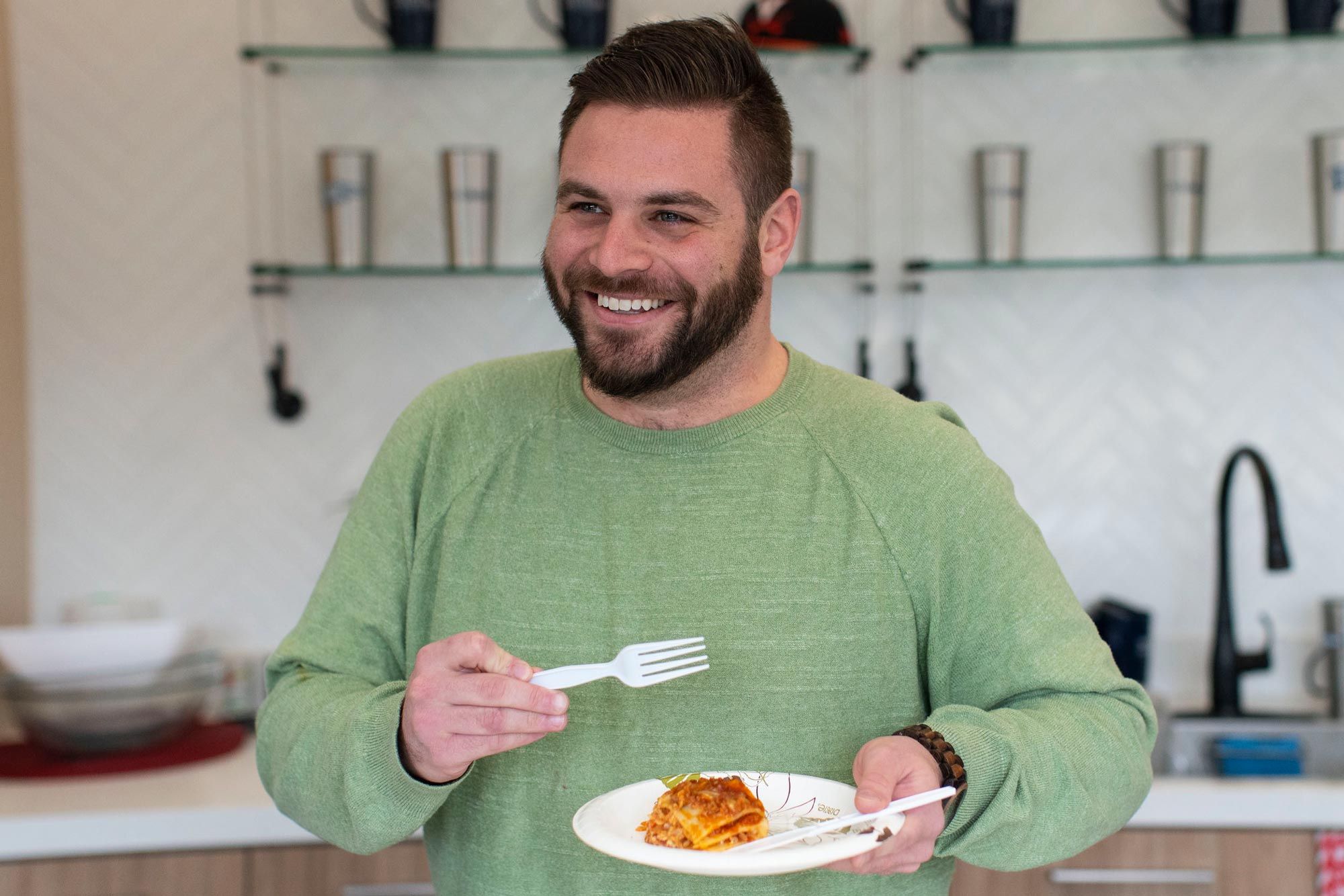 Vinny said the sauce in his family’s lasagna is usually a lot sweeter, but that he liked the flavor profile in lasagna Woldetensae.

Ironically, one of the things Caroline and I both liked was the subtle flavor of the American cheese. It really gave the dish a unique taste. And it didn’t take long for the 9x13 pan to disappear.

Lasagna Woldetensae was a slam dunk.

Perhaps Hoos fans can give it a try as they hunker down during this pandemic and eagerly await their reigning national champion’s return to the court next season..

Here Is What You Need to Know About the New Coronavirus Variant, Omicron END_OF_DOCUMENT_TOKEN_TO_BE_REPLACED

Fall Is in the Air on Grounds END_OF_DOCUMENT_TOKEN_TO_BE_REPLACED

Meet the Cats and Dogs Your CVC Donation Supports END_OF_DOCUMENT_TOKEN_TO_BE_REPLACED