Tomas Woldetensae Finds a Home Away From His Italian Home 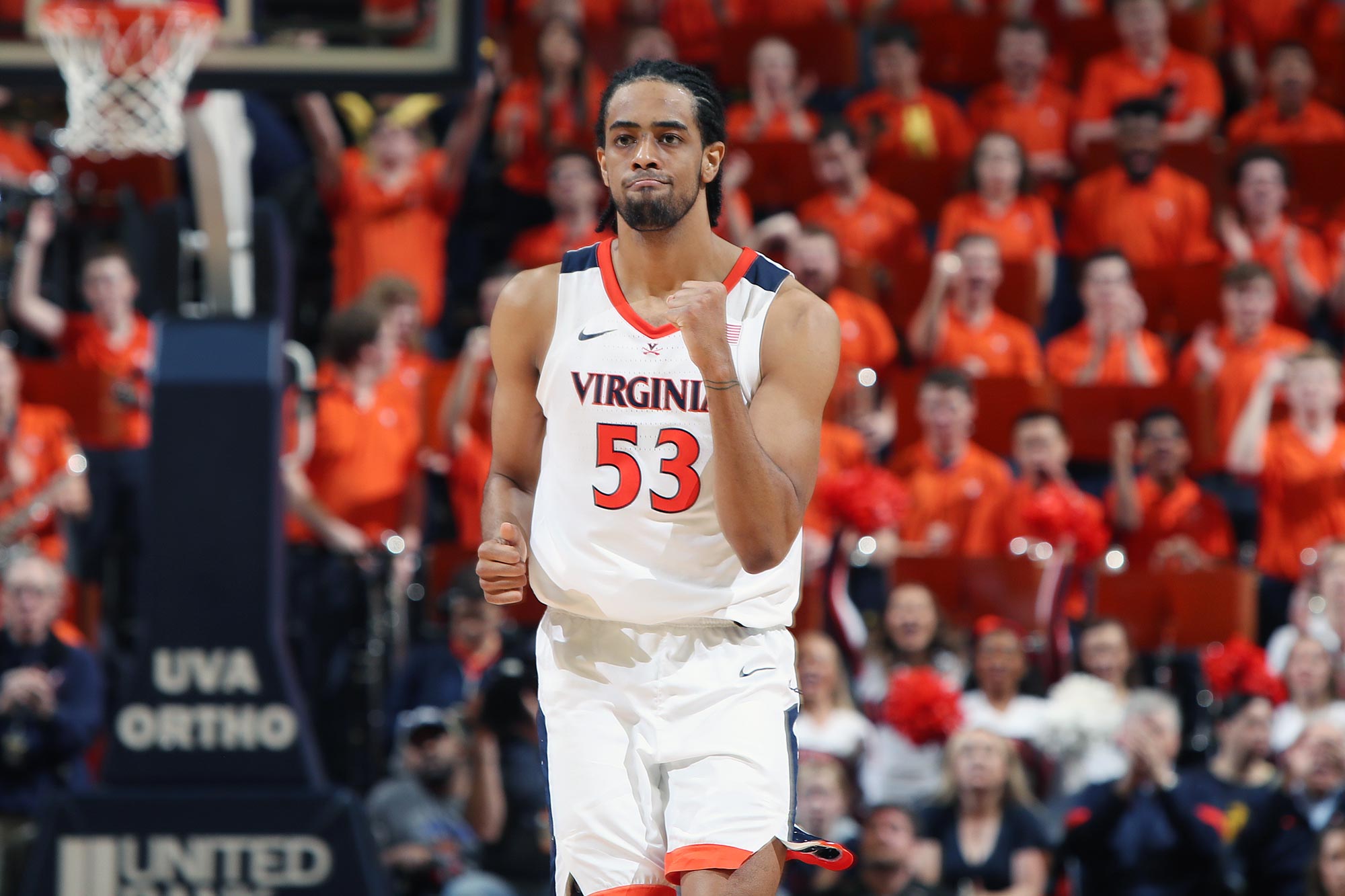 For Tomas Woldetensae, home is Italy, and he’d prefer to be by his mother’s side in Bologna as their country grapples with the COVID-19 pandemic. But it’s safer for him in the United States, and he’s found a new home for the time being: in Albemarle County with the Kersey family.

Woldetensae (pronounced Wohl-duh-TEN-sigh) is in his first year at the University of Virginia, where he shares an off-Grounds apartment with several of his basketball teammates, including Grant Kersey, a graduate of nearby Albemarle High School. When the COVID-19 outbreak led UVA to move to online classes this month, most students headed home. That wasn’t an option for Woldetensae, so the Kerseys invited him to move in with them.

“We have a guest room here, and that’s his room now,” said Kersey, a fourth-year student who’ll graduate from UVA this spring.

Woldetensae’s hosts are Todd and Cindy Kersey and their two children: Grant and Madison, who’s a second-year student at UVA. Todd, a UVA graduate, is chief operating officer of the Virginia Athletics Foundation.

“They’re great,” Woldetensae said of the Kerseys. “They’re always open, and they cherish their time together. Just a lot of community.”

Not only is Woldetensae getting a taste of family life in America, “He’s bringing some of his Italian family life into it as well, so it’s a good balance,” Grant said.

It doesn’t hurt that Woldetensae, a man of many interests, is talented in the kitchen.

“Tom, he’s a really good chef, so he’ll make us dinners, just because he wants to,” Grant said. “It’s fun. Lasagna is his specialty, but he’s got a lot of other [dishes, too].”

(We recreated Woldetensae's lasagna recipe for UVA Today readers. Check it out.)

For the Kerseys, Grant said, Woldetensae’s presence has been “a blessing in disguise. It is unfortunate and it’s sad that he can’t go home, but for me and my family, for him to be able to come here puts everything in perspective. We’re fortunate enough to be able to go home and hang out with family, but he can’t go see his mom, and his mom’s quarantined in Italy and can’t go anywhere.”

Woldetensae talks with his mother every day. She’s in good health, he said, as are his other relatives in Italy.

“She’s more worried about me than her status at the moment, of course, being a single mom,” Woldetensae said. “She’s just doing whatever [officials in Italy] ask, so she’s staying at home and taking care of her health.”

Woldetensae, a 6-foot-5 left-hander, came to the U.S. for his final two years of high school, which he spent at Victory Rock Prep in Bradenton, Florida. Then came two years at Indian Hills Community College in Iowa, where he was named to the National Junior College Athletic Association All-America first team in 2018-19.

That was also the season UVA won the program’s first NCAA title, after which three players with eligibility remaining – De’Andre Hunter, Ty Jerome and Kyle Guy – declared for the NBA draft. Suddenly, the Cavaliers needed help on the perimeter, and head coach Tony Bennett secured a commitment from Woldetensae last May.

In a season that ended abruptly on March 12, when the NCAA shut down college basketball due to the pandemic, Woldetensae started 22 games for the Cavaliers (23-7). He averaged 6.6 points and shot 36.1% from 3-point range. He finished with a team-high 52 treys, 20 of which came in three games.

Woldetensae hit seven 3-pointers in an overtime win over Wake Forest, seven in a loss to Louisville, and six, including the game-winner, in a victory over North Carolina.

“I came here hoping to have a chance of playing and showing my abilities, and I think I did,” Woldetensae said. “But at the same time, I have a lot of things that I could improve on, and I’m willing to face those aspects of my game. But what I’m most happy with is that I pretty much [proved] that I am capable of playing at this type of level.”

On the back of his No. 53 jersey, to left of his last name, is the initial B. That’s a tribute to one of his mentors, the late Alfio Benazzi, and there’s more to come. Woldetensae said he’s in the process of officially changing his full name to incorporate Benazzi’s.

“Just because he impacted my life so much, I wanted to add his last name to mine,” Woldetensae said. “He’s the guy that initiated my basketball career. So now, everything that I do from now on, everybody’s going to relate to him as the guy who put me out there.”

This has been a school year unlike any other for Woldetensae.

“There’s a lot of thoughts going through my head at the moment,” he said. “Of course, I’m worrying about family and stuff like that. But basketball-wise, at first everybody was devastated knowing that we couldn’t experience March Madness and try to make a run. But also individually I’ve been chasing March Madness for so long, and I was a step from it and everybody got canceled. So it was a little bit of a punch in the face. But at the same time, throughout my experience and learning, it’s another challenge, and I face challenge every day, and it’s just part of the process, I guess. It’s just making you stronger.”

Woldetensae usually returns home to Bologna, which is in northern Italy, in the summer. With online classes now under way at UVA, he wishes he could go home and be with family and friends, Woldetensae said, but the situation in Italy is grave, and dramatic measures aimed at slowing the spread of COVID-19 are in place.

“So if I could go back, it would just be a lockdown,” Woldetensae said. “[People] literally can’t walk outside. They’re in a deeper quarantine than we are here. So from that aspect, it wouldn’t be a good idea.”

At UVA, he’s majoring in studio art, with a concentration in drawing, and he’s taken electives in architecture. His classes this semester include one in design thinking.

“It’s a different mentality,” Woldetensae said. “I’m learning how design is not just an object or just something that is good to watch and to admire with your eyes, it’s more thinking. Everything that we make and create as humans, it’s design.”

The students toured Central Park – Meyer said the group walked more than 30 miles in three days – and met many of the key people involved with the famous site.

“It was a nice experience, for sure,” Woldetensae recalled, “studying how it was designed, how it was built, the thought process behind certain things in the park.”

Since he was a child, Woldetensae said, he’s “wanted to be included in the creative aspect of the workforce, like drawing or architecture itself.”

He realizes now that becoming an architect would be difficult, because of the twisting academic path he’s followed, and he hopes to play professional basketball after graduating from UVA. Eventually, though, he’d be interested in a career in interior design or something similar.

Kersey has put Woldetensae’s creativity to good use in two videos they’ve recently produced and posted on Twitter. Both feature hoops, naturally, and one showcases the basket on which the teammates play in the Kersey family driveway.

“Tom does the filming, because he’s got the artistic eye,” Kersey said, “and I do the editing. It turned out better than I thought it would.”

Kersey “comes up with these ideas,” Woldetensae said, “and I just sprinkle in my experience in the creative field.”

When Woldetensae visited UVA for the first time in the spring of 2019, Kersey was among the players who, along with several coaches, went to lunch with him. Kersey’s first impression?

There was much more beneath that calm surface. When Woldetensae enrolled at UVA that summer, he moved into an apartment with three teammates: Kersey, Austin Katstra and Francesco Badocchi. (Badocchi, who’s also from Italy, is no longer on the team.)

“The first day I come in, Tom’s already there, and he just starts talking right away, hanging out and talking the whole night,” Kersey recalled, laughing. “I was like, ‘This is a completely different kid. He’s not quiet at all.’”

Editor’s note: During this time of non-competition, UVA Athletics will be posting frequently on VirginiaSports.com to keep you up to date with the happenings, experiences and thoughts of our student-athletes, coaches, staff and alumni. We encourage Wahoo fans to share these links on your social media accounts for others to enjoy. #GoHoos

For All of Us END_OF_DOCUMENT_TOKEN_TO_BE_REPLACED