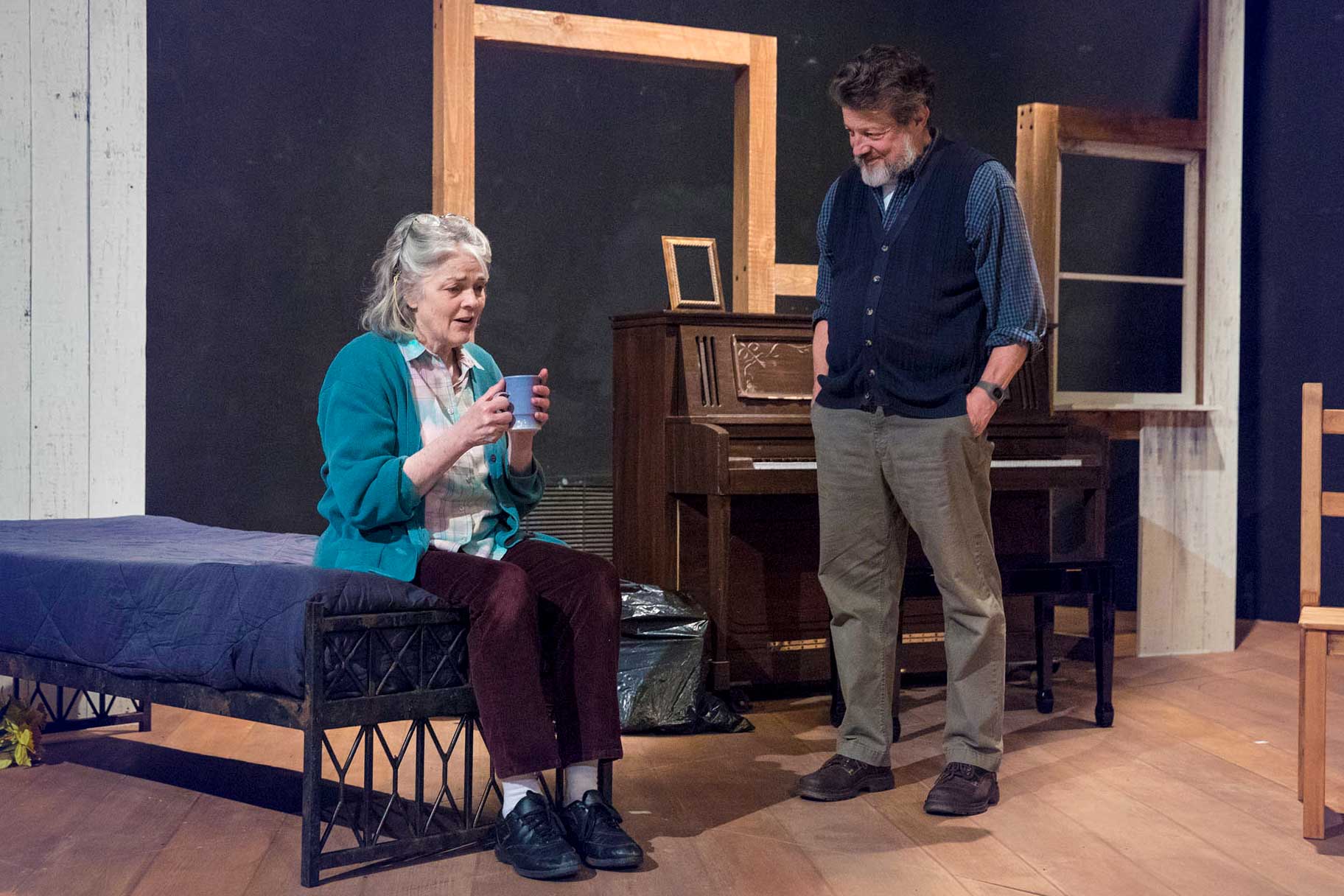 Judith Reagan and Richard Warner in a rehearsal for their upcoming play, “Chapatti.” (Photo by Dan Addison, University Communications)

Judith Reagan said the biggest challenge of acting opposite her husband of 40 years, Richard Warner, is remembering that their characters do not know each other as well as the actors do.

“We have to recreate that distance and sort of rediscover falling in love,” she said.

Reagan and Warner are both retired University of Virginia drama professors. Thursday night, they will take the stage together for the first time in 25 years in the Heritage Theatre Festival’s production of “Chapatti,” a 2014 play written by Christian O’Reilly and directed by Doreen Bechtol.

The two-person play, spun out in the style of an old Irish yarn, follows Betty, a bubbly widow with 19 cats, and Dan, a prickly widower caring for the dog he named after his favorite Indian dish, chapatti.

Now in its 43rd year, the Heritage Theater Festival continues to draw renowned actors and directors to Charlottesville each summer to work with UVA faculty members and students. “Chapatti” is one of five plays the festival is putting on this summer, with shows that began in June and continue through early August.

It is a moment of transition for the festival, which celebrated longtime director Robert Chapel’s retirement in 2015 and recently welcomed a new artistic director, UVA alumna Jenny Wales. Wales will step into the role in August, with UVA drama professor and chair Colleen Kelly currently serving as interim director.

For Reagan and Warner, the festival is a reminder of how their marriage began. They met at a similar summer theater festival in Maryland decades ago, when both were graduate students at Catholic University in Washington, D.C. Joining this year’s festival, Warner said, felt like coming full circle.

“It’s just a wonderful opportunity to work together, particularly doing a two-hander [a two-person play],” he said.

Ten years into their marriage, the couple – who have numerous theater and film credits to their name – moved to Charlottesville, where they built successful careers as actors and faculty members in UVA’s Department of Drama.

Before “Chapatti,” they had starred in two other two-person plays together, in addition to appearing onstage together in larger casts. Warner has also directed Reagan in several plays. Their long marriage, both said, means that the level of trust and intimacy acting requires comes very naturally.

“With any new play, you have to form the relationships in the script with the other actors, whether you have known them for years or don’t know them at all,” Reagan said. “Still, knowing each other as we do, there is a kind of shorthand that we can access.”

“When you are with someone for 40 years, you know his or her rhythms,” he said. He compared acting with his wife to going on a trip or some other new adventure with someone you love.

“You see that person in a different context,” he said. “This is a wonderful sort of caper, a big adventure where we are free to play and to show each other things that we might not have shown before.”

Bechtol, the director, said that having two actors with such deep knowledge of each other helped bring the script to life quickly – which is critical, because the compressed summer festival format allowed only three weeks of rehearsal.

“They already have a rapport and ability to trust one another and go deep right off the bat,” said Bechtol, who acknowledged that working with Warner and Reagan was a major reason she decided to do the play. “They are just masters at work, and it’s an honor to be working with them.”

Storylines in “Chapatti,” which debuted in Chicago three years ago, resonated deeply with Bechtol, Warner and Reagan. Both characters are in their 60s, rebuilding their lives after facing loss and tragedy.

“It is a play that features the lives and stories of two older people, stories that I feel are not featured as often in American theater,” Bechtol said. “Really, empathy is at the heart of it, showing the monumental effect that empathy and kindness to a stranger can have on someone’s life.”

Reagan likened the play to discovering that someone you pass on the street has an unexpected backstory or is dealing with a particularly tough loss.

“If you passed these characters on the street, you might think that they have most of their lives behind them, that there is not much special about them,” she said. “I think we make those kinds of assumptions about each other all of the time, and in doing that, we miss the boat. We miss what is really there.”

Warner finished her thought. “The great thing about these characters is that they reach out and help each other even when they don’t have to,” he said. “I think that is really important right now.”