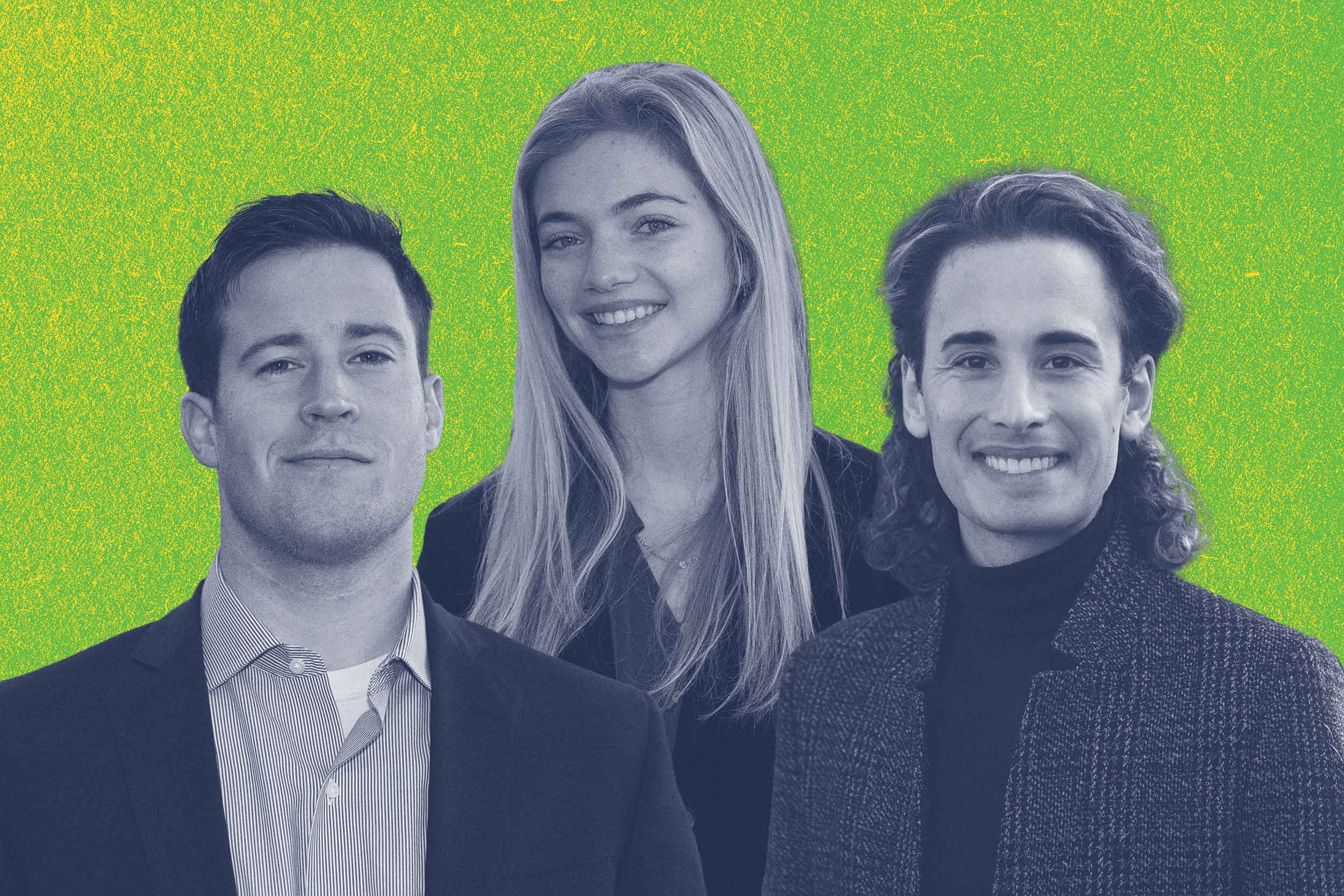 Three University of Virginia students will pursue a one-year Master of Global Affairs degree in China as Schwarzman Scholars.

Lisette Dubow, Christopher Benos and Nicholas Keeley will attend Schwarzman College at Tsinghua University in Beijing, and are among 151 Schwarzman Scholars from 106 universities in 33 countries. They are UVA’s ninth, 10th and 11th Schwarzman Scholars since the program started in 2016.

The program’s core curriculum at Schwarzman College focuses on leadership, China and global affairs. It is taught by Tsinghua faculty and international scholars, and incorporates frequent guest lecturers.

Outside the classroom, Schwarzman Scholars have access to China through internships, mentors, high-profile speakers and world-renowned researchers. Scholars receive a range of career development resources to help position them following graduation.

“Three students, in three very different stages of their development, from four different schools at the University,” said Andrus G. Ashoo, director of the Office of Citizen Scholar Development, the fellowships office of UVA. “It doesn’t always happen this way, but it is great to see such breadth of personality and experience represented among the recipients from UVA alone. I am really proud to have crossed paths with each of them.

“The Schwarzman focuses on leadership, but it is otherwise a global opportunity available to almost any student at the University.” 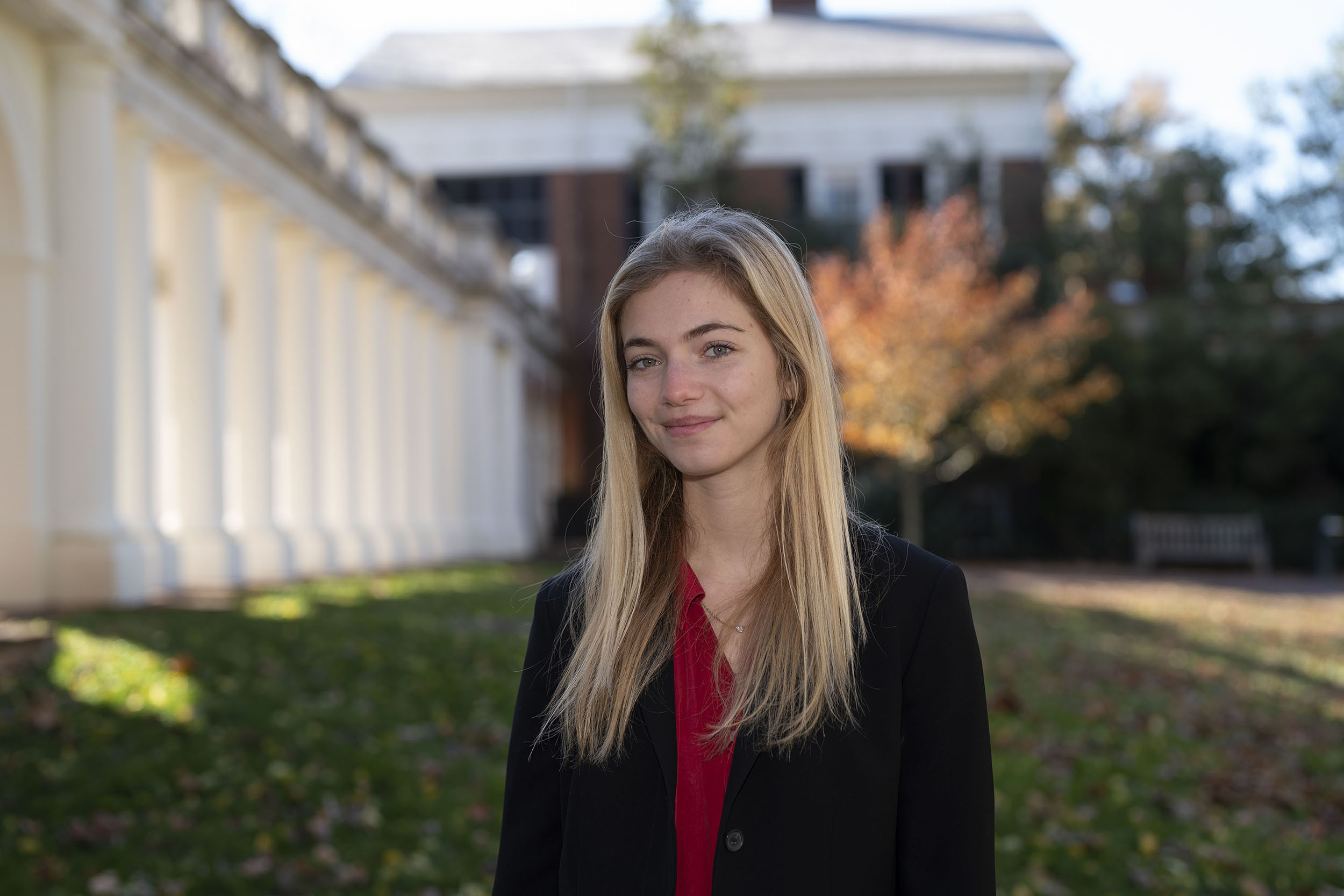 Lisette Dubow has always envisioned herself living and working in various countries throughout her career. (Photo by Dan Addison, University Communications)

Lisette Dubow of Princeton, New Jersey, is a fourth-year leadership and public policy major in the Frank Batten School of Leadership and Public Policy, with a minor in Chinese and Middle Eastern studies.

“I have always envisioned myself living and working in various countries throughout my career,” Dubow said. “The Schwarzman will give me an ideal start toward building my global network. I’m looking forward to spending time in China and making friends with such distinguished individuals.”

Dubow is anxious to immerse herself in building relationships with the other scholars, guest speakers and faculty at Tsinghua University and within the Schwarzman Scholars program.

“I want to expand my leadership capabilities and cross-cultural knowledge so that I can productively contribute to the future of U.S.-China relations,” she said. “I am also interested to see how living in China and engaging in the Schwarzman Scholars amplifies and/or changes my policy interests and passions.”

Dubow applied to the Schwarzman Scholars program to better understand how the U.S. and China could shape the future of global public health.

“I am eager to understand how current and future leaders conceive the importance of health advocacy strategies, especially following the COVID-19 pandemic,” she said. “After Schwarzman, I will keep expanding my interest in public health advocacy by studying health education disparities across the globe. My goal is to amplify culturally inclusive health promotion techniques worldwide.”

“Lisette’s natural empathy and compassion make her a truly phenomenal student and leader,” said Amanda Cheetham, assistant director of the Peer Health Educators program in UVA’s Office of Health Promotion. “She absolutely radiates authenticity and positivity. Anyone who is lucky enough to work closely with her will walk away from their interaction feeling inspired, supported and intrigued. Lisette’s life experiences and academic choices have prepared her perfectly for this opportunity. She is going to thrive in this environment with the opportunity to interact with others from around the world to sharpen her leadership skills.”

Dubow worked as a research assistant for Gabrielle Adams, an assistant professor at the Batten School.

“Lisette is the kind of person who will excel at whatever she sets her mind to,” Adams said. “She is incredibly smart and hard-working and has achieved so much at UVA. I look forward to watching her succeed in similar ways as a Schwarzman Scholar.”

“Lisette is probably the student I have seen grow more through a fellowship process than any other this year,” Ashoo said. “She is genuinely curious and takes criticism well, and I think she will put her fellow scholars at ease to be themselves.” 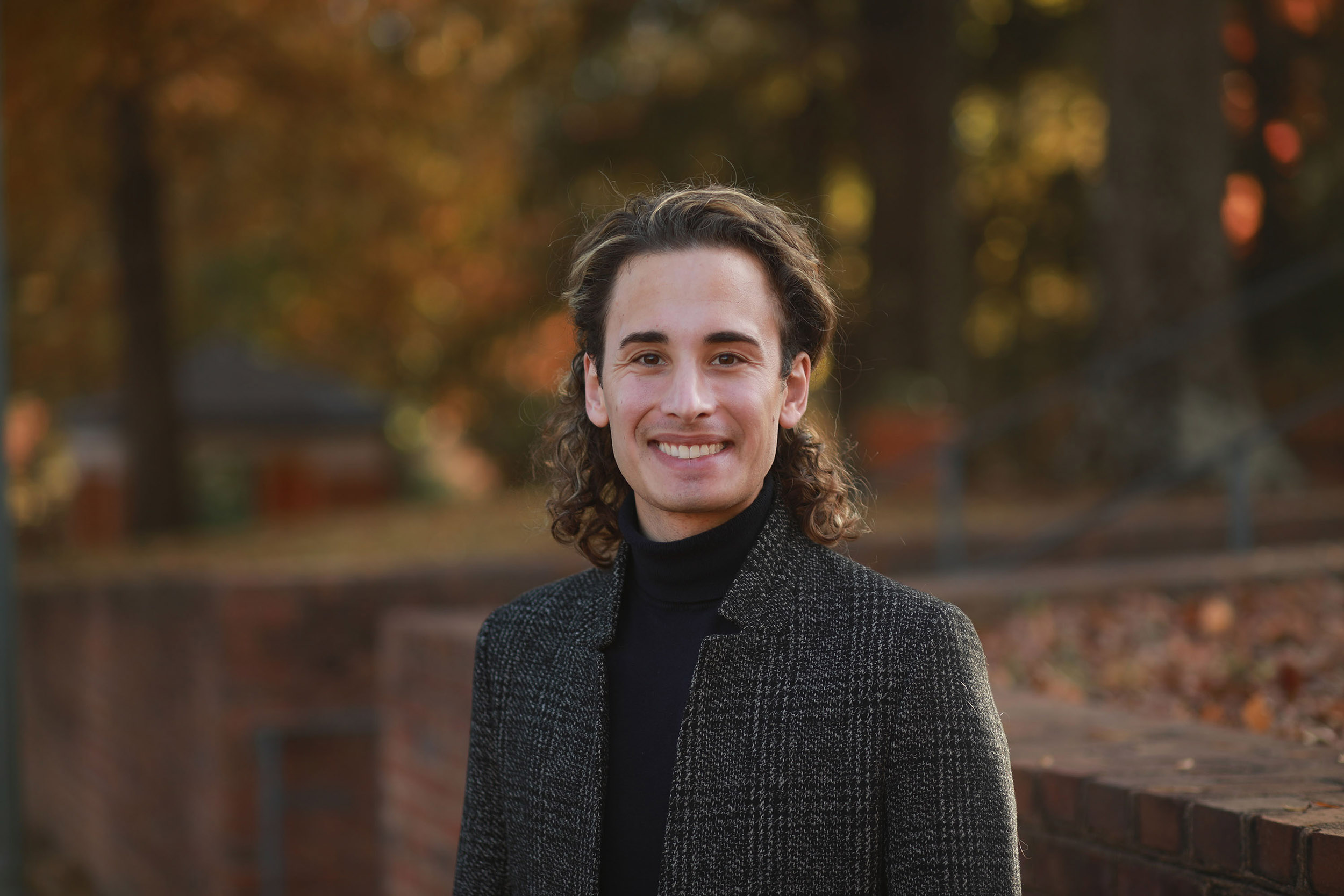 Christopher Benos, a third-year law student from Richmond, sees the Schwarzman program as an opportunity to both learn and serve.

“The challenges we face are experienced most acutely at the local level, but are shaped by what happens on the international stage,” Benos said. “I hope to study Chinese political and legal institutions so I can someday apply those lessons domestically, first in my hometown and then at the national level. During the program, I will contribute to the comparative legal community at Tsinghua, immerse myself in Chinese culture, philosophy and music and serve as an ambassador for American law.”

After the Schwarzman program, Benos plans to clerk on the U.S. 3rd Circuit Court of Appeals and aspires to a career in law and politics.

“Our nations need ambassadors in law and politics who understand our differences, celebrate our common goals and cultivate a transformational partnership,” Benos said. “The Schwarzman program uniquely positions me to be one such leader as we work to build a more just, more equitable and more peaceful world.”

Benos received a bachelor’s degree from the honors program in UVA’s Department of Politics and also majored in French.  He was a Wendy Whitlow Jefferson Scholar, a Coca-Cola Scholar and an Echols Scholar. As an undergraduate, Benos was a Lawn resident, led as the editor-in-chief of the Wilson Journal of International Affairs, served on the Honor Committee and directed a youth mentoring program. A pianist, Benos worked as a teacher and musician after receiving his undergraduate degree and has released three albums.

As a law student, Benos is a member of the Raven Society and the Appellate Litigation Clinic, has contributed to the boards of two journals, was a Legal Writing Fellow and chairs the appeals process for the Honor Committee. His legal scholarship on trusts and estates has been nationally recognized. He also served as a research assistant to law professor Micah Schwartzman. Benos was a summer associate at Sullivan & Cromwell LLP and an intern at Virginia’s Legal Aid Justice Center.

“Christopher is amazingly talented, a superb researcher and an important voice in our intellectual community,” said Micah Schwartzman, director of the Karsh Center for Law and Democracy and Hardy Cross Dillard Professor of Law. “It’s hard to think of someone who would be a better ambassador for the University and for the Commonwealth of Virginia. He has a great opportunity to study and learn in China and I know that he will make the most of it.”

“I have known [Benos] for years, and he has continued to be a reflective and methodical leader who thinks deeply before speaking – often profoundly,” Ashoo said. “I can see him raising the intellectual bar for his cohort.”

Benos views the Schwarzman as life-changing.

“I am humbled by the chance to join an incredible group of leaders, scholars and global citizens,” he said. “And I cannot express my gratitude enough to the family members, professors, mentors at the Office of Citizen Scholar Development, colleagues and friends who made this journey possible. The University’s support of its students is truly unmatched.” 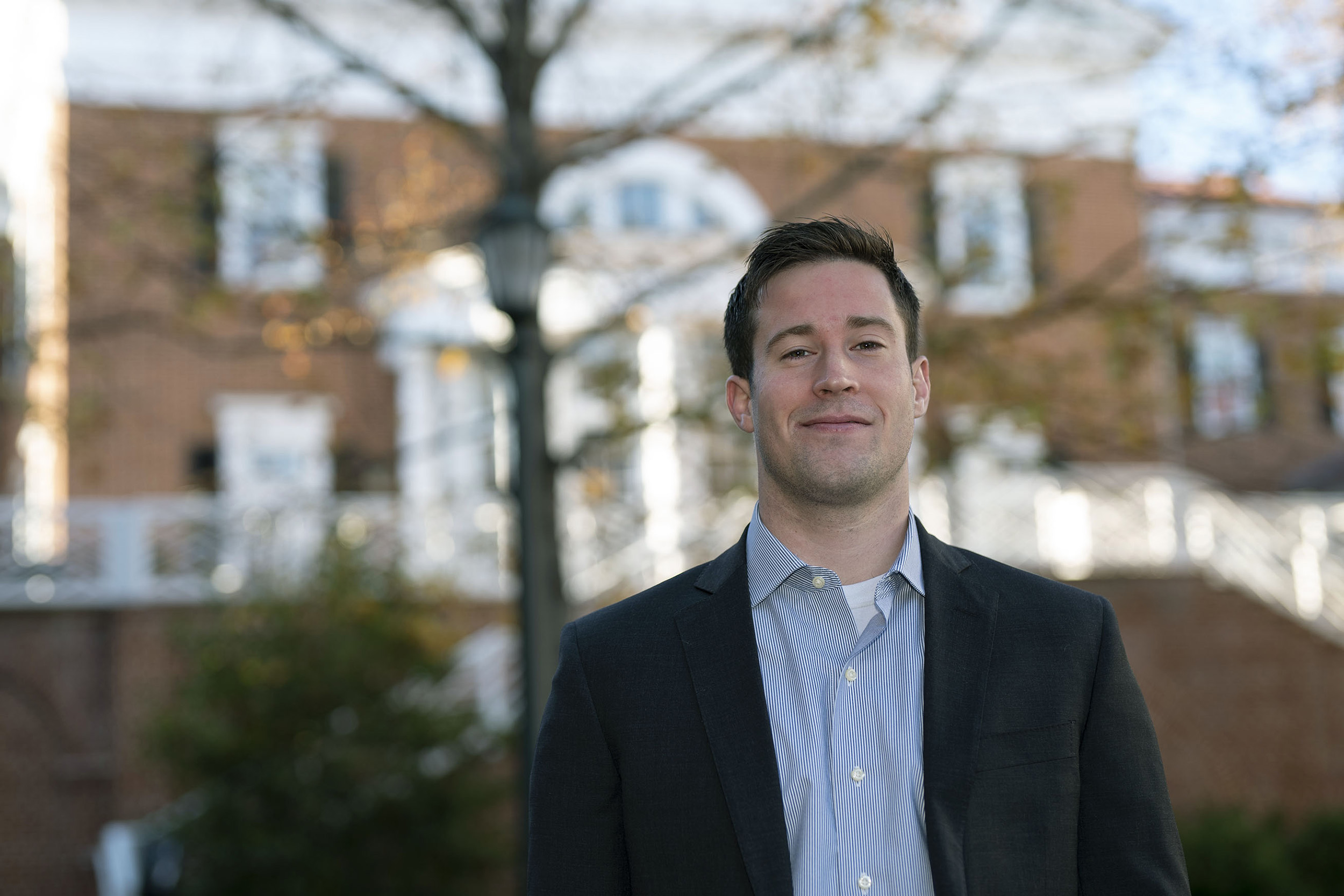 Keeley is aware of the opportunities that may be open to him.

“First, I’ll be exposed to prominent business and political figures, as well as the Schwarzman Scholar network,” Keeley said. “I hope that these connections will be mutually beneficial, particularly as I venture into the entrepreneurship space. Second, I’ll finally be able to brush up on the Chinese I studied in college and hopefully attain business fluency. This would open doors to work at offices in China.”

In addition to rekindling his Mandarin proficiency and building a network, he wants to explore the machine learning and artificial intelligence startup community in Zhongguancun, China.

“I’m also looking forward to getting to know my cohort,” Keeley said. “The UVA Schwarzman awardees I’ve met so far are incredibly impressive.”

Keeley said he feels supported by his two degree programs at UVA.

“The Master of Science in Data Science program is one of a kind and was a huge draw to the University for me,” Keeley said. “They’ve been extremely flexible and accommodate taking an MBA simultaneously at Darden, which is a difficult academic scheduling feat to overcome.”

“I believe his curiosity about the world complements his passion for understanding East Asian culture and the Chinese language,” Shane Dikolli, Bank of America Associate Professor of Business Administration at Darden, wrote in his letter of recommendation. “Nick is especially well-placed to transform his passion into a powerful force for good.”

Keeley was a student in Dikolli’s accounting for managers course.

“I have the highest regard for Nick’s personal qualities,” Dikolli wrote. “He is extremely personable and I could imagine him being equally as comfortable and as successful building relationships anywhere from a factory floor to an executive boardroom. He exudes confidence without any hint of arrogance, he demonstrates compassion, he follows his passion and instincts, he is emotionally intelligent and decent and he acts with great integrity in any role that I’ve observed him serve.”

Keeley said attending Darden has been the best academic experience of his life.

“The faculty here are unrivaled and the uniquely rigorous core curriculum enforced at Darden, coupled with pure adherence to the case-study method, sets its students apart when they join firms following graduation,” Keeley said. “It often flies under the radar, due to its relatively remote location, but I hope it stays this way – it’s a special place where the student body wants to be overwhelmed by learning and that’s not necessarily what all MBA applicants want out of their two-year experience.”

Keeley was an active participant in Darden Cup events, served as a club officer for both the Data Science Club and the Darden Military Association. He earned an undergraduate degree in East Asian studies from Princeton University in 2016. Following graduation from Princeton, Keeley was commissioned as an officer in the Army’s 25th Infantry Division, where he trained alongside Southeast Asian partner nations before attending graduate school.

“While Nicholas and I served together in the Army, I was consistently impressed by his work ethic and passion,” said David Armando Zelaya, associate editor of the The Company Leader, an internal military leader development weekly email. “Toward the end of our time together, we both worked on a proposal to integrate AI into military decision-making and I could tell he was passionate about the subject. Nicholas was the creative force behind that project. He just thinks of problems in unique ways and his passion drives him to tackle them with an energy most people don’t have.”

“I’ve only known Nick for a few months through preparation for the interview, but he has a humility and presence about him that I love,” Ashoo said. “Not only was he invested in our every group interaction, he was concerned with the other two finalists from UVA as well. He will likely be a bridge-builder for the Schwarzman class.”