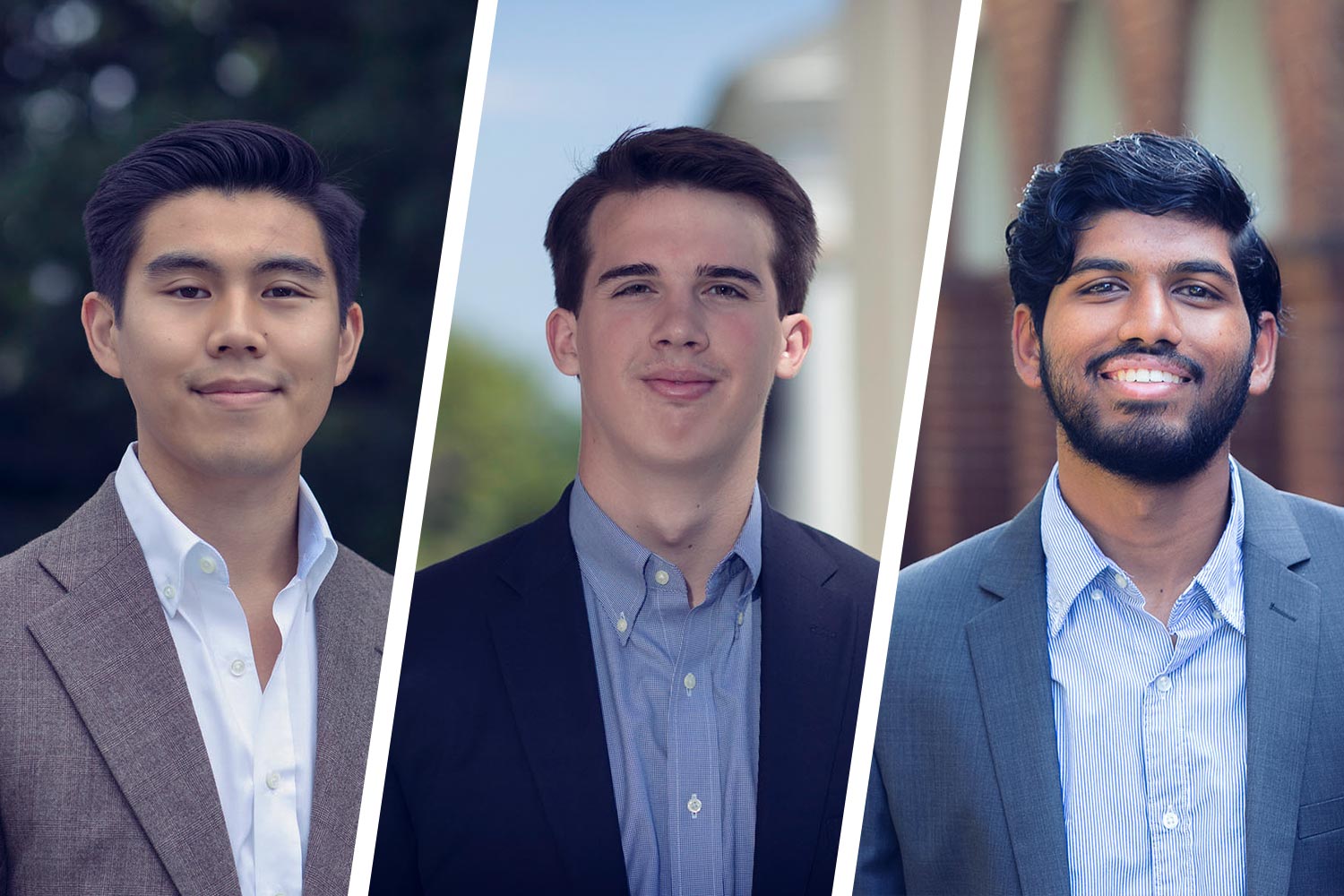 Three recent University of Virginia graduates will continue their studies this fall in the United Kingdom with Rotary Global Grants of $40,000.

Tim Ford of Denville, New Jersey, another May graduate, will pursue a master’s degree in Latin American studies at the University of Cambridge. With his double major, Ford focused on finance, management and global commerce at the McIntire School of Commerce and Spanish at the College of Arts & Sciences, adding a minor in economics.

David Varghese of Centreville, a 2018 graduate with a bachelor’s degree in global development studies and a candidate for an accelerated Master of Public Policy degree from the Frank Batten School of Leadership and Public Policy, plans to pursue a Master of Public Health degree at Imperial College London.

The Rotary Club of Charlottesville nominated the students, who then were selected by a district committee. The scholarships are intended for students who do not already have an immediate or family connection to Rotary. Global grant scholars must be pursuing a career in one of six areas Rotary supports: peace and conflict prevention/resolution; disease prevention and treatment; water and sanitation; maternal and child health; basic education and literacy; or economic and community development.

Christopher L.W. Elliott, president of the Rotary Club of Charlottesville and assistant dean of global affairs and director of the Center for Global Commerce at UVA’s McIntire School of Commerce, said the three scholars are an inspiration to students committed to making an impact on their world.

“Our Global Grant Scholarship recipients this year offer an excellent sampling of Rotary’s areas of focus around the world,” Elliott said. “Kevin’s interest in studying the intersections of education policy and economic development fits perfectly with the Rotary priority of basic education and literacy. David’s intentional study of the pathology of disordered eating through a Master of Public Health program in London aligns him very well with Rotary’s global focus on disease prevention and treatment. And Tim’s broad focus on economic development and trade blocs in Latin America clearly positions his study within ‘economic and community development.’

“We are thrilled to support these three UVA students, and look forward to following the impact of their work for years to come.”

He said the scholars will connect with a wider global network of Rotarians in the communities where they will reside and continue their progress through graduate programs.

“I’m quite pleased for David, Kevin and Tim,” said Andrus G. Ashoo, who oversees the Office of Citizen Scholar Development. “This isn’t the first fellowship opportunity that any of them have pursued, but this is clearly the right fit. Each of these students has been working toward worthy goals of contributing to communities and ideals greater than themselves. I look forward to following how they further develop and the relationships they will cultivate with Rotarians in Cambridge, London and Oxford.”

“The M.Sc. in comparative and international education at the University of Oxford marries my interests in education policy, international development and data analytics,” Cao said. “My hope is that this program will equip me for a career working to advance education equity in the United States and around the world.”

A Jefferson Scholar and an Echols Scholar at UVA, Cao was also a 2017 Meriwether Lewis Fellow. He was a researcher for Engineering Students Without Borders, a project leader for Student Entrepreneurs for Economic Development, a Latino and Migrant Aid volunteer for Madison House, a tour guide for the University Guide Service and a core group leader for Chi Alpha Christian Fellowship. He also participated in the Clinton Global Initiative University. He received a Raven Society Scholarship, a College Council Minerva Award, a Center for Global Health University Scholarship and a Jefferson Public Citizen grant. He is a graduate of the Thomas Jefferson High School for Science and Technology in Alexandria. 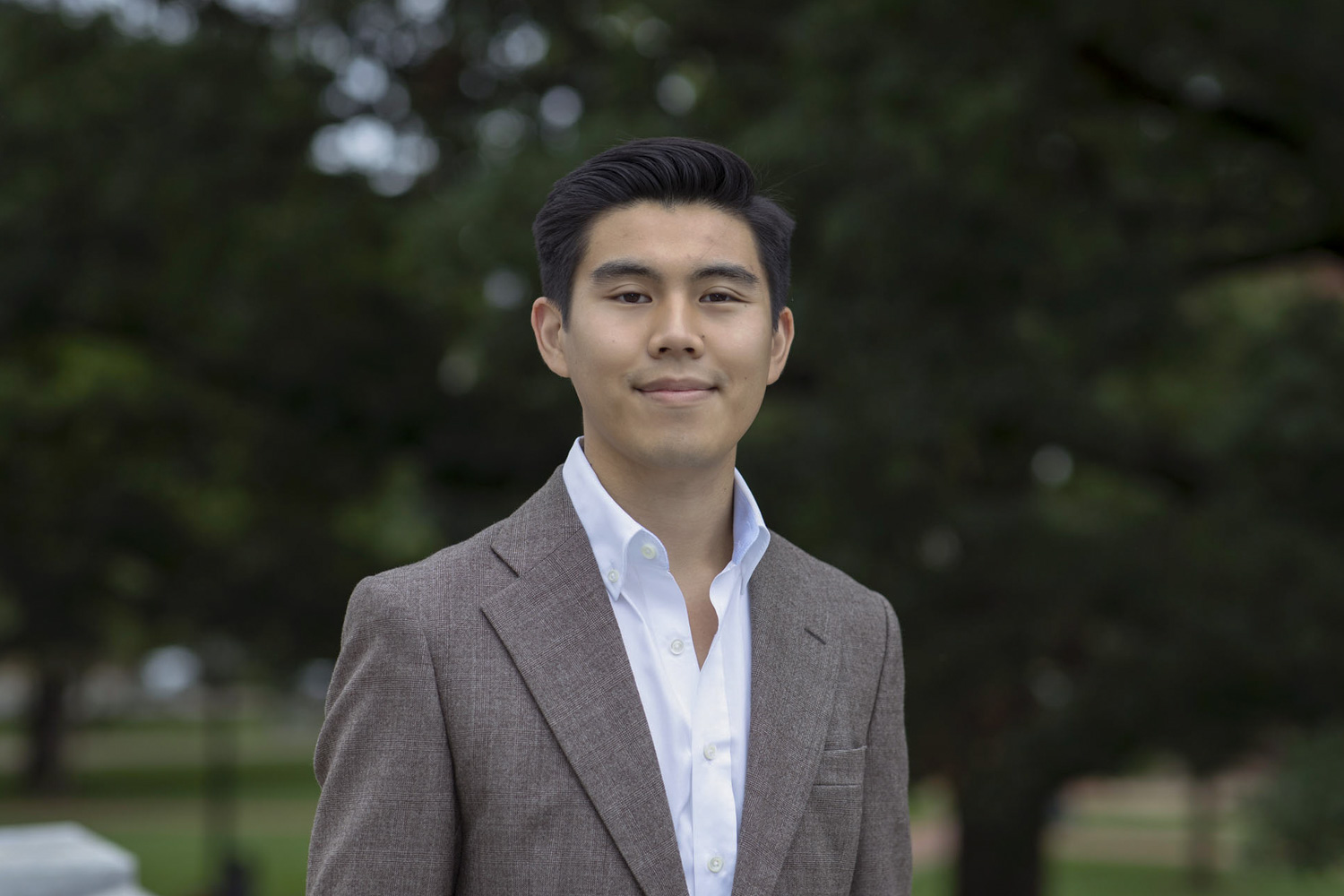 Kevin Cao of Fairfax will pursue a master’s degree in comparative and international education at the University of Oxford. (Photo by Dan Addison, University Communications)

Ira C. Harris, professor of commerce and director of the Master of Science in Commerce program at the McIntire School of Commerce traveled with Cao in the school’s Europe-Global Immersion Experience group and called him “mature beyond his years.”

“I could rely on Kevin to consistently raise important questions and engage company executives on thoughtful topics,” he said. “As the business world engages in an ‘arms race’ to collect and analyze more data, the human relationship skill set will gain importance in the marketplace. Kevin excels on this dimension and this will serve him well in his career.”

Harris also said Cao improves the learning experience for students around him.

“I am humbled to be presented with this scholarship, grateful for the opportunity to partner with Rotary International in advancing education equity and thankful for the unwavering support from my professors, mentors, family and friends,” Cao said.

“I’ll be in Cambridge’s M.Phil. in Latin American studies program, researching the impact of education on social activism and community engagement in low-income communities, particularly in Bolivia,” Ford said. “Education, and expanding access thereto, are causes that resonate with me; they can have such a meaningful impact on what individuals and communities are able to accomplish.”

Bill Wilkerson, an associate professor of management at the McIntire School of Commerce, taught Ford in classes dealing with international business issues.

“There were several international students in the class, and Tim went out of his way to make them comfortable,” Wilkerson said. “Tim’s written work was high quality and his contributions to the classes were exceptional. I might be describing any number of exceptional students, but Tim went beyond that. He has an engaging and delightful personality. He is also modest and doesn’t show off or show up other students. He is interested in what others have to contribute to discussions.” 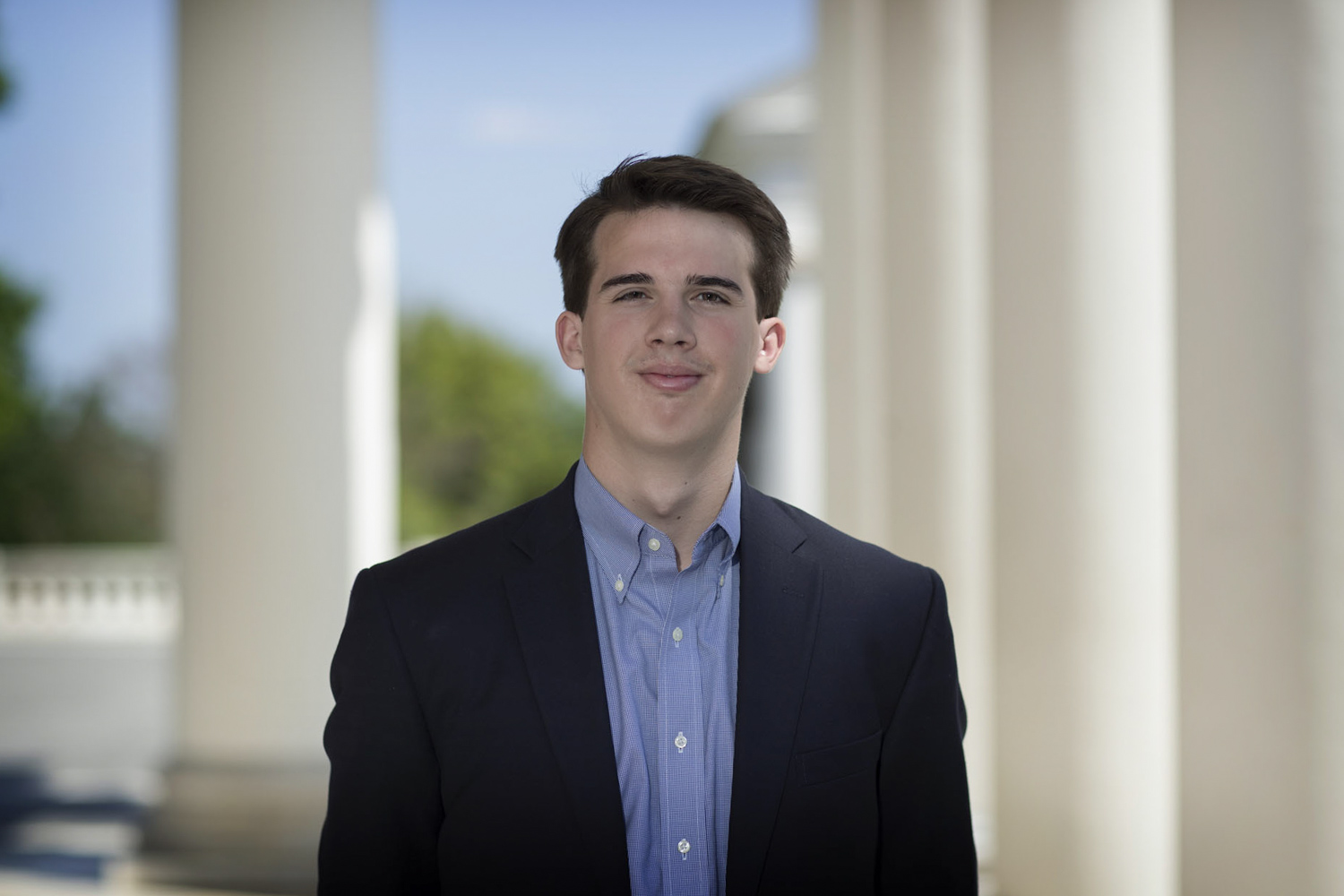 Tim Ford of Denville, New Jersey, will pursue a master’s degree in Latin American studies at the University of Cambridge. (Photo by Dan Addison, University Communications)

“Venture capital can bring investments to under-served entrepreneurs with great ideas, helping them spur economic growth and job creation in their communities,” he said.

Michael Atchison, a professor of commerce at the McIntire School, said that Ford participated fully in his experience at UVA.

“This is my 38th year teaching at UVA, and I can honestly say that Tim is one of the best and brightest students that I have had the pleasure to teach,” he said. “He is kind and helpful to other students, has a pleasant personality and always has a smile.”

As Ford studies at Cambridge, he plans to use some of his scholarship money to travel to Latin America to conduct primary research for his thesis.

“I’m honored to have been chosen for this scholarship because it means I have a chance to work closely with a cohort of students from all around the world and dig into research that excites me,” he said. “I think this will be a great way to complement my finance background with more humanities-driven learning, and I think having those unique perspectives in combination will be a great resource for me in the future.”

Varghese’s research focuses on the prevention and treatment of mental illness – specifically eating disorders, which he said claim the highest mortality rate among psychiatric illnesses.

“Without adequate treatment, up to one in five people with serious eating disorders, such as bulimia or anorexia, die,” Varghese said. “I sought to understand the social and environmental underpinnings that may contribute to the development of eating disorders, because this is an issue that largely afflicts college-aged students, and as a student I was able to learn from the lived experiences of my peers.” 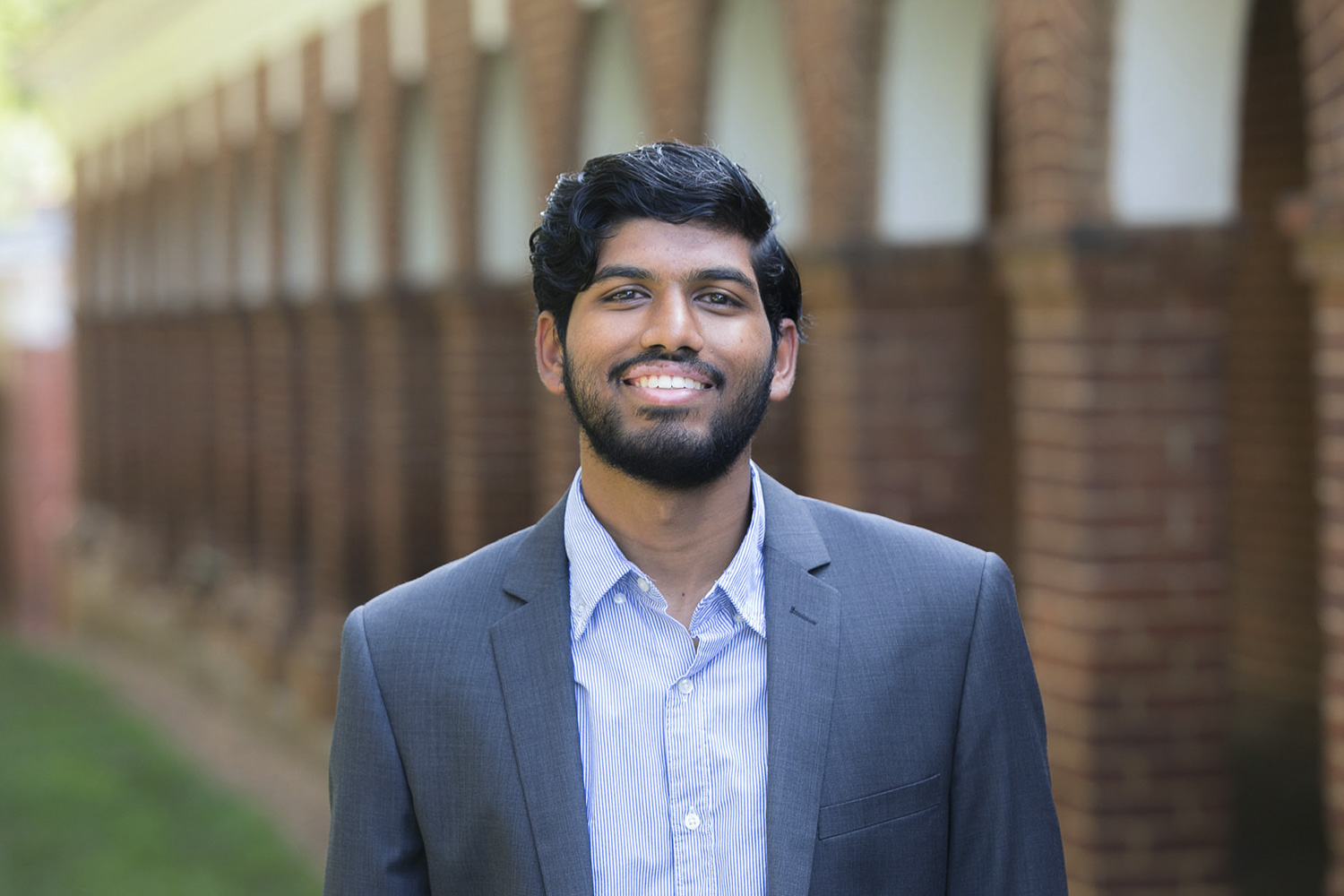 A Meriwether Lewis Fellow, Varghese served on the University Judiciary Committee and was a member of Chi Alpha Christian Fellowship and a volunteer at HelpLine. He also participated in the Clinton Global Initiative University. A graduate of Centreville High School, he plans a career in medicine involving global development and health equity.

Allen W. Groves, associate vice president and University dean of students, mentored Varghese as part of the Meriwether Lewis Institute, a program for 25 students selected after their second year of study in which each student is tasked with developing a topic of interest for intellectual exploration.

“David is a very thoughtful young man who is exceptionally positive in his outlook and exudes enthusiasm when he speaks about this public health priority,” Groves said. “I can attest to his seriousness, focus and exceptional personal character.”

Varghese said he was drawn to the Rotary Foundation’s resolve to improve disease prevention and treatment efforts around the world. “I was eager to work alongside the Rotary Foundation to improve disease treatment models. I hope to merge my background in global development, public policy and public health toward practicing medicine and pursuing health equity in both domestic and international domains.”

He said the program in London would advance his research.

“An understanding of disease management on a systemic level is a valuable asset to any aspiring physician,” he said. “The M.P.H. program at Imperial College London is pregnant with opportunities to coordinate with and learn from various multi-lateral agencies such as the World Health Organization and the local National Health Service Trust. Partnering with the Rotary Foundation will streamline my own efforts in the area of disease prevention and treatment and, consequently, help nurture my interest in health care and medicine.”

At UVA, There Is a Club for Everyone END_OF_DOCUMENT_TOKEN_TO_BE_REPLACED