As Tony Bennett Closes in on UVA Wins Record, the Hollands Couldn’t Be Happier 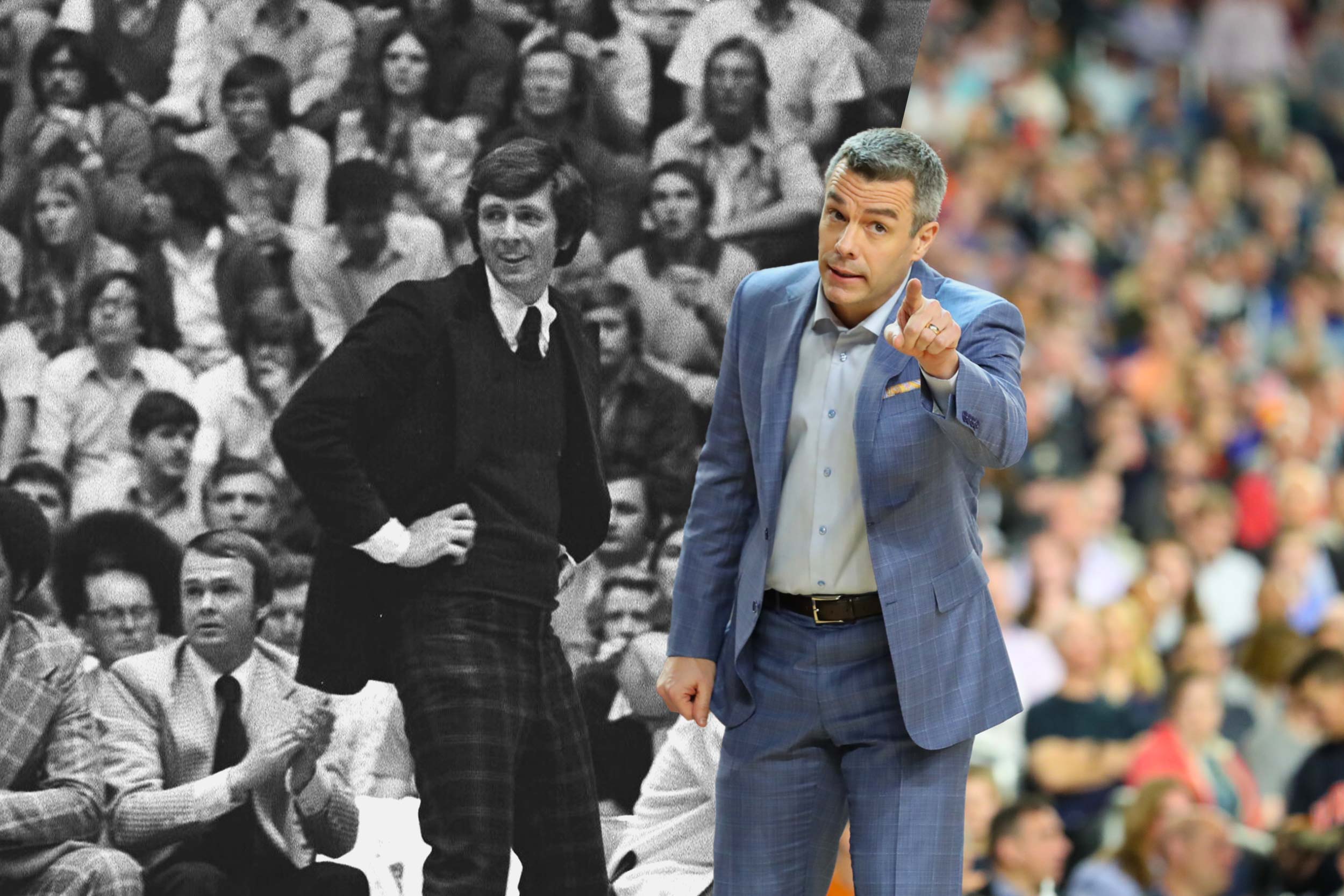 Terry Holland, from 1974 to 1990, set the standard for University of Virginia men’s basketball coaches.

These are all reasons why he was inducted into the Virginia Sports Hall of Fame in 2003. 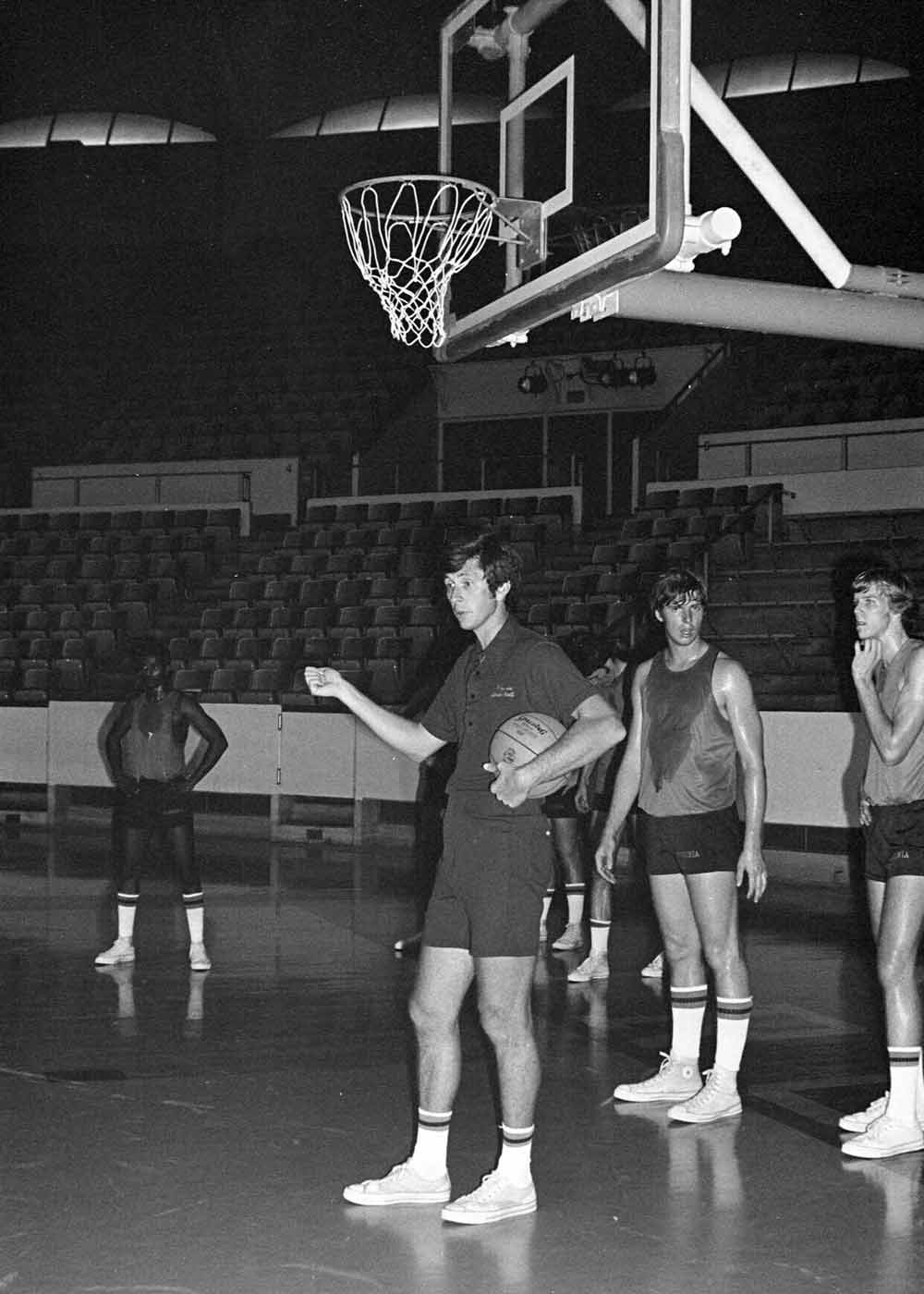 Terry Holland, who led the Cavaliers from 1974 to 1990, conducts practice at the old University Hall. (Photo by David Skinner, University Photographer)

For a while, though, one of Holland’s achievements has been on the verge of being topped.

Ann Holland, Terry’s loving wife of over five decades, ran the numbers last January and initiated the conversation with her husband.

“He was so honored when I told him that,” Ann Holland said. “He has so much respect for Tony. What a great person to break that record.”

Entering Tuesday’s game at the University of Miami, Bennett is three victories shy of passing Holland, who went 326-173 over 16 seasons at UVA, as the all-time winningest coach in Cavalier men’s basketball history. (Holland stepped away from coaching in 1990 to become athletics director at Davidson College, his alma mater.)

Bennett, when asked about the record last week during his “Coach’s Corner” radio show, flashed his signature humility and said plainly, “I guess that means I’ve been here a long time.”

Terry Holland, 80, suffers from Alzheimer’s disease and spends most of his days in memory care at the Westminster-Canterbury of the Blue Ridge assisted living center in Charlottesville. Ann remains by his side, always gracious to share some of her family’s favorite stories.

In late 2019, Ann said, Terry hosted his three brothers on a tour of John Paul Jones Arena, the place he played a key role in designing and fundraising for as UVA athletics director (1995-2001) and special assistant to the president (2001-04).

An already memorable visit became special, Ann said, when Bennett, less than a year removed from guiding the Cavaliers to their first national championship in program history, invited the Hollands into his office.

“Tony just talked to them,” Ann said. “He said amazing things. He looked at Terry’s brothers and said, ‘Your brother did this, he did the building, he did the program. And I don’t want to mess it up. I’m going to work as hard as I can.’

“I don’t know how many coaches would do that. It was amazing.” 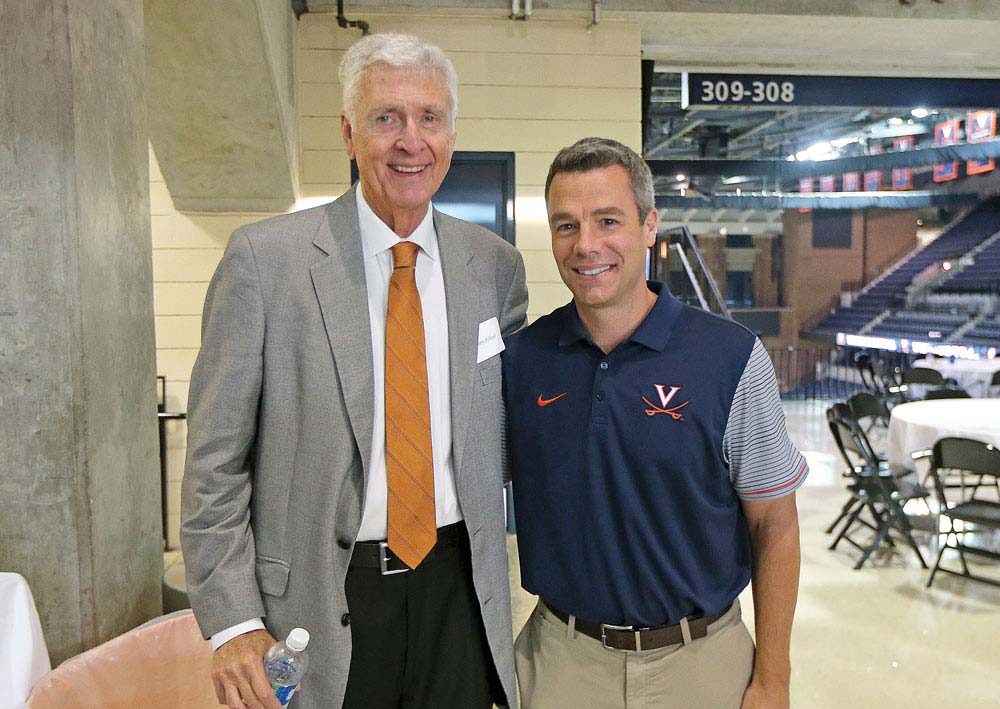 Holland and Bennett, seen here during a 2016 event at John Paul Jones Arena, have long admired each other. (Photo by Matt Riley, UVA Athletics)

The Hollands have long admired Bennett. Terry, Ann said, was “very excited for Virginia” when Bennett was hired from Washington State University in the spring of 2009. A big fan of Tony’s father, Dick – who coached at, among other schools, the University of Wisconsin from 1995 to 2001 – Holland knew that Bennett would bring his preferred style of basketball to Grounds.

“Terry loved defense,” Ann said. “He loved it! He used to say, ‘All we have to do is take away the things that they like to do and we’re going to win.’ He always made sure they played good defense.

“At the end of his coaching, it was funny – people wanted to see the run-and-gun. They weren’t real fired up about the defense. And Tony comes, and all I could think of was, ‘Isn’t that great? The crowd has been educated and now they understand you’re not going to win without it.’”

Bennett has directed his famed Pack Line defense to help the Hoos amass 324 wins – against 118 losses – over the last 13-plus seasons. It’s a stifling man-to-man system that’s been ingrained into the UVA basketball culture; there are now sponsored promotions at JPJ for shot clock violations forced by the Cavaliers. The fans, naturally, go wild each time it happens.

Terry, Ann said, has long referred to Bennett as “the defensive guy,” a fitting label for the orchestrator of a program that’s led the country in scoring defense six times since 2013. 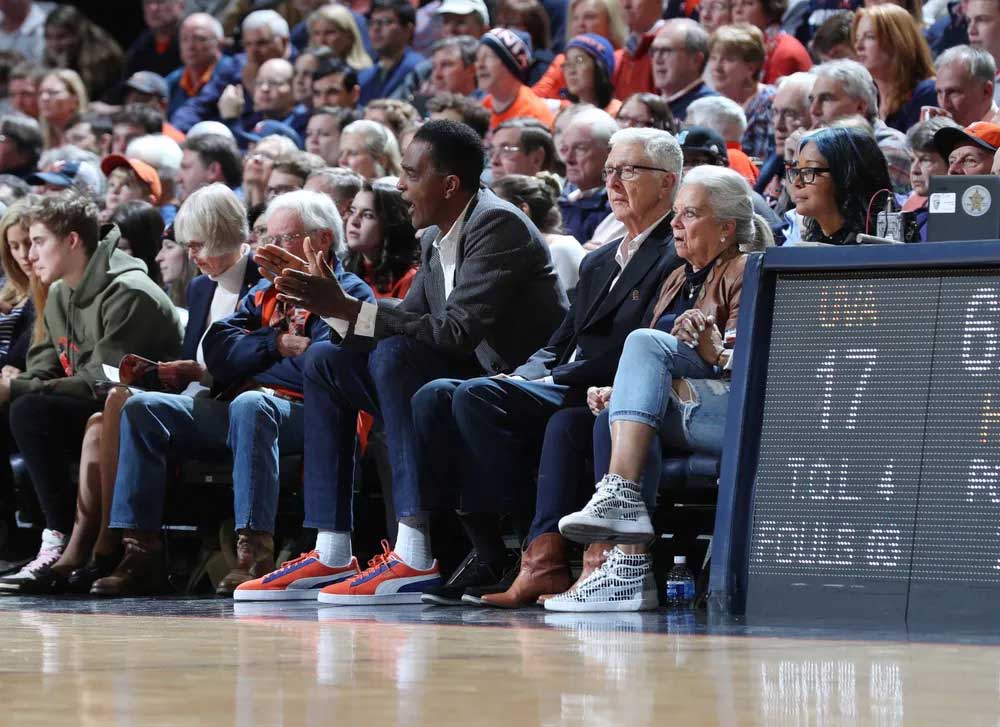 Bennett was among the many who recognized the familiar faces sitting courtside for UVA’s 2020 win over Duke. From left to right, Ralph Sampson, Terry Holland and Ann Holland. (Photo by Matt Riley, UVA Athletics)

“Terry so was good at developing his players and not letting them do things they weren’t going to be successful doing,” Ann Holland said. “And I think Tony Bennett is a lot like that.

“That Pack Line is a continuation of the same style Terry had. He does have his system, but he puts his players in the right places. And that’s a talent.”

There’s mutual admiration from Bennett toward Holland. After a home win over Duke University in 2020, Bennett opened his post-game press conference by acknowledging Terry and Ann’s presence at the game.

“It made my heart smile seeing Coach Holland sitting across the court, and his wife,” Bennett said. “Late in the game, during a timeout, I looked at him and I smiled and I thought of all he’s done for this program. ... It was a sweet moment.”

A year earlier, Ann said it was Bennett who was instrumental in making sure the Hollands were in Minneapolis to watch the Cavaliers play in the Final Four and the national championship.

“It was just really special for Terry,” Ann said. “It was amazing. And to see how Tony responded to everything was right up Terry’s alley. It was just so classy, and it made Virginia be classy.”

While Terry’s condition makes it difficult for him to comprehend games now, Ann has known for a while how her husband might react to Bennett finally passing him as UVA’s winningest coach.

“Nothing would make him happier than to see the defensive guy break that record,” she said.