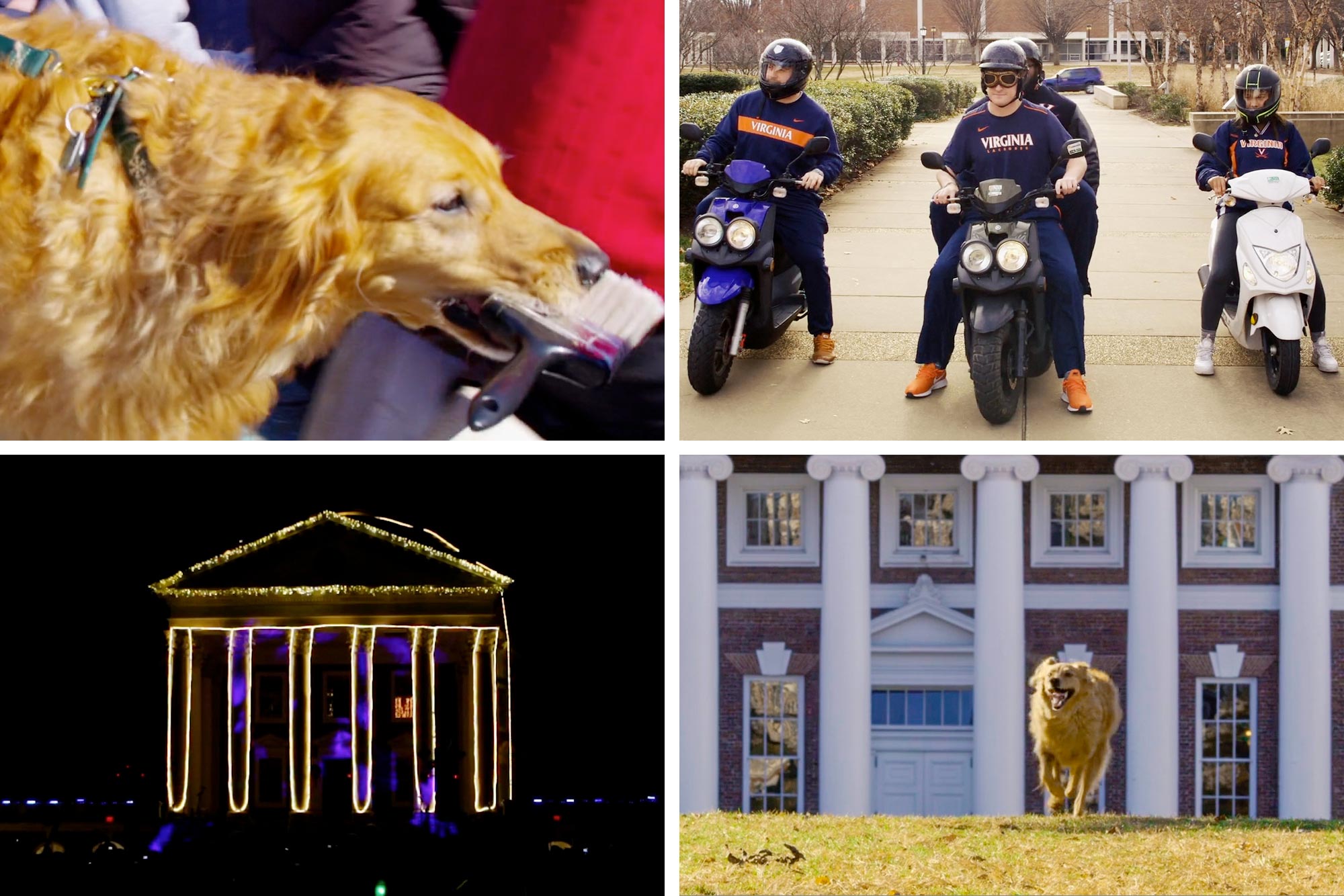 A University of Virginia student is painting the Beta Bridge all alone until, suddenly, UVA President Jim Ryan appears and lends assistance. Before you know it, more helpers from all across Grounds – including a golden retriever – arrive with paint brushes in tow.

What may have taken the one student hours to do is accomplished in a fraction of the time.

Yes, it would be fair to say that UVA’s annual holiday video, which has been a hot conversation topic within the University community and on social media since its release earlier this month, hit all the right notes.

By now, this is nothing new. The videos, which in the past have featured singing groups, professors, administrators, student-athletes, coaches, Cav Man and others, have become something of a tradition.

With this in mind, here’s a look back at highlights from past videos.

In 2018, members of the University community have only 10 minutes to get to the Rotunda for a holiday photo shoot that President Ryan has requested.

“How are we supposed to get there in time?” UVA Athletic Director Carla Williams asks rhetorically.

“I got this,” says Cavaliers men’s head basketball coach Tony Bennett, who whistles a gang of mopeds over.

Bennett, Williams and others then hop on the back of the bikes and hightail it to the Rotunda.

In the 2016 video, viewers are immediately drawn in as a rendition of “The Good Old Song” plays. Lawnees kick back in rocking chairs as a student dressed in a tuxedo bounds up the steps of the Rotunda.

In a festive Dome Room, the University Singers, led by Director of Choral Music Michael Slon, belt out a spectacular rendition of UVA’s official alma mater, “Virginia, Hail, All Hail.”

This 2014 video had a whimsical, romantic feel to it.

After they get there, they continue singing as viewers are treated to sweeping 360-degree views of the Lawn in all of its holiday splendor.

I don’t know what you’re doing this December

These were the lyrics of a song by Holley Maher that played as students delivered Rotunda-themed cookies and flowers and reflected on family members, some of whom they perhaps weren’t able to be with during the holidays.

A poignant moment of the 2017 video occurs when UVA professor Larry Sabato hosts a Thanksgiving dinner for international students.

The positive, fun, energetic vibe that the Hullabahoos brought to their performance back in 2015 is still mesmerizing. The UVA a cappella group performed a medley with classic songs “When It’s Cold Outside,” “Don’t Worry Be Happy” and “Let It Snow” that leave you with some serious warm and fuzzies.

With a spectacularly lit Rotunda as the backdrop, the video concludes with students and members of the University community singing “The Good Old Song.”

Who can forget the hourlong video – featuring an array of cameos – that was filmed in front of a roaring fireplace in 2019?

Looking a bit like golf’s version of the Harlem Globetrotters, two members of the UVA golf team bounced balls off their clubs – and to each other – as they stood, quite casually, by the fire. (Erik Duda, the video production manager within UVA’s Office of Communications, says no trick editing was used.)

Former football star quarterback Bryce Perkins, in a nod to the Cavaliers earning an invitation to the Orange Bowl in Miami, plopped down in a chair and ate an orange, tossing the peel into the Commonwealth Cup trophy that UVA had won for beating rival Virginia Tech just days before.

But perhaps the biggest laugh came about halfway through the video when two students from the Virginia Woodsmen Team entered the room with a sawhorse. They proceeded to use a two-man saw to cut a giant log, presumably to build, well, we have no idea. Maybe they were just making some extra kindling.

What’s Next for UVA’s Class of 2022? END_OF_DOCUMENT_TOKEN_TO_BE_REPLACED